N.C. Superior Court Judge G. Frank Jones came off the bench to ask questions to James Henry Royster seated second from left during a plea hearing in Onslow County Superior Court on Friday, Jan. 14, 2022, in Jacksonville. Royster accepted a plea sentence that will put away the Jacksonville man for a minimum of 64 months to a maximum of 89 months. Seated next to Royster is his attorney Bryon Smith while Assistant District Attorney Bob Roupe is seated before him. (Photo: Mike McHugh) 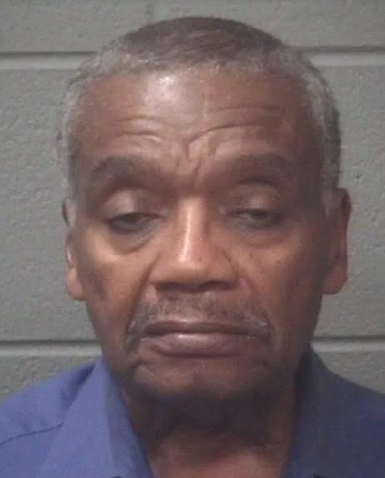 N.C. Superior Court Judge G. Frank Jones came off the bench to ask questions to James Henry Royster seated second from left during a plea hearing in Onslow County Superior Court on Friday, Jan. 14, 2022, in Jacksonville. Royster accepted a plea sentence that will put away the Jacksonville man for a minimum of 64 months to a maximum of 89 months. Seated next to Royster is his attorney Bryon Smith while Assistant District Attorney Bob Roupe is seated before him. (Photo: Mike McHugh)

Emotions ran high and the court exhibited enormous patience during a plea hearing Friday, Jan. 14 in Onslow County Superior Court involving a motorist who drove through the scene of a minor wreck that had just occurred killing one and severely injuring two others.

James Henry Royster, 82, of Jacksonville sat quietly alongside his lawyer, Jacksonville attorney Bryon Smith as N.C. Superior Court Judge G. Frank Jones questioned Royster to determine his competency and his understanding of the proceedings and the charges he faced.

In hushed speech—often inaudible at times—and further muffled by his cloth mask, Royster was unable to raise his voice sufficiently causing Jones to come off the bench and situate himself a safe social distance from the defendant and Smith at the defense’s table. A court procedure that normally takes less than a minute ensued for more than 26 minutes. After a five minute recess with both attorneys in the judge’s chambers, Jones finally heard Royster say he accepted the plea of guilty.

Royster faced charges of driving while impaired, felony death by vehicle and two counts of felony serious injury by vehicle.

Royster’s plea sentence will have the former landscaper and father of 10 serve an active sentence of 64 months minimum up to a maximum incarceration of 89 months. The court took into consideration Royster’s poor health that includes a weak heart that’s aided by a pace maker and made a request for the N.C. Department of Corrections to house him at Butner Correctional Institution or a similar CI that has medical facilities.

The charges and subsequent punishment stems from a Dec. 18, 2018 incident on Rocky Run Road in Jacksonville in the early evening hours around 7:30 p.m., according to 5th Prosecutorial Assistant District Attorney Bob Roupe. Roupe explained that Madeleine Hobbs was exiting the Brookstone subdivision and was struck by an oncoming vehicle on Rocky Run Road. Though a minor wreck, many individuals stopped to assist including Kevin Grajeda, an active duty Camp Lejeune Marine and Tracy Legg, a former Navy Corpsman. Grajeda went to assist Hobbs who was wedged in her driver’s seat after her airbag deployed. As the assembled were standing in the roadway, Royster, driving a 2005 pick failed to stopped first striking Hobbs’ car then hitting Grajeda and Legg and finally the other vehicle involved in the initial minor wreck, according to Roupe. Royster’s vehicle came to rest in a nearby retention pond.

Roupe said witnesses and N.C. State Highway Patrol officers said Royster “smelled of alcohol, was glassy eyed and was unsteady on his feet.” Authorities got a warrant to draw blood from Royster some three hours after the incident which came back with a blood alcohol content of .08. The legal limit in North Carolina is .08.

Of the three victims struck by Royster, one would die. Legg, 46, a wife and mother of four would succumb to her injuries two days later at New Hanover Regional Medical Center in Wilmington. Grajeda suffered internal injuries and fractures that were so severe he had to be medically discharged from the USMC. Twenty-four year old Hobbs suffered critical injuries throughout her body including the loss of both legs and over time has had to have 20 surgeries, suffered many strokes while enduring massive migraines, according to her wife Samantha Hobbs.

Samantha addressed the court and didn’t hold back her ire for Royster who sat expressionless and looked down at the desk during the victim impact portion of the proceedings. In a strong and forceful voice, she prefaced each point by stating, “Because of the defendant’s actions….” Hobbs said the events of Dec. 13 were “totally avoidable” and “we’re here today and the reason we had to move from our house is because of his actions.”

Regina Jordan, Madeleine’s mother in a quiet albeit emotional voice addressed the court speaking her words through the prism of a mother said “no words can describe the trauma and sorrow caused by the actions of the defendant.” She cited several milestones in her daughter’s life measuring each one in days. “It’s been 1,128 days since Dec. 13, 2018” and told the court that her daughter was a vivacious child and young person participating in volleyball and basketball at Swansboro High School where she graduated in 2012 then after graduating from East Carolina University coaching the same sports while on the faculty at Swansboro Middle School.

Kari Price, A close friend and co-worker of Tracy Legg read a statement from Price’s parents who were unable to attend. They described their daughter as “selfless, a rock, a pure joy and someone who was very positive. We miss her everyday,” they wrote. Price than spoke and admitted that she was angry but realized that “Tracy wouldn’t want me to live so much anger.” Price recalled that Christmas was Legg’s favorite time of the year and that she cared for everybody including hosting service members at her home when they were unable to go home. “You could take her out of the Navy but you couldn’t take the Corpsman out of her,” Price said. “My goal today is to let the world know the angel on Earth that she was.”

Grajeda was more forgiving. The former Marine said the events of Dec. 13 changed many families lives. I’m grateful to be here speaking. I’m am still honestly sick about that day,” Grajeda said. “People make mistakes. I forgive him. I hope we can all move on and live a better tomorrow.”

Royster declined an offer to address the court.

After the statements were read and before the courtroom bailiffs took custody of Royster, Judge Jones summarized his thoughts of those who were critically injured and one who died and those who remain along to offer support, guidance and love. ‘Not all wounds are visible,” he said.