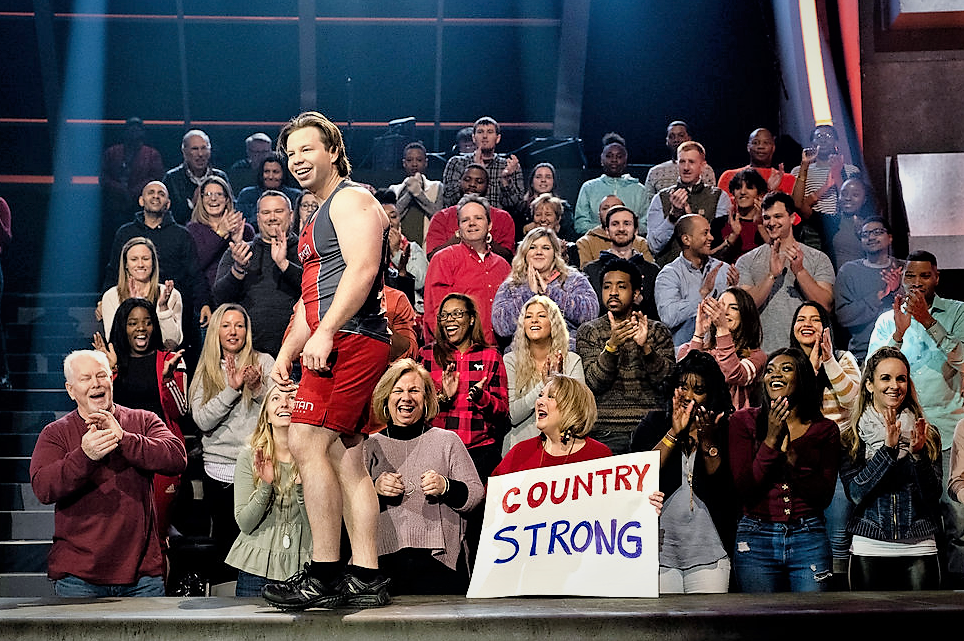 Croatan agriculture teacher Will Sutton flashes his fun-loving side with a big grin during a commercial break in his first appearance July 13 on NBC’s The Titan Games. (Contributed photo) 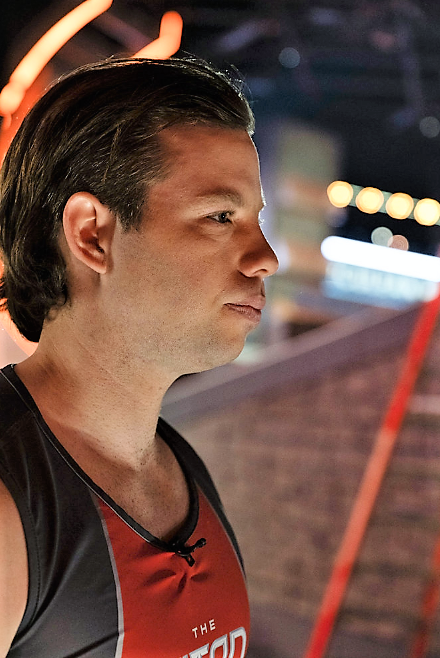 Croatan jayvee basketball coach Will Sutton has defied the odds and earned a spot in Monday’s Eastern Region final on NBC’s The Titan Games. (Contributed photo) 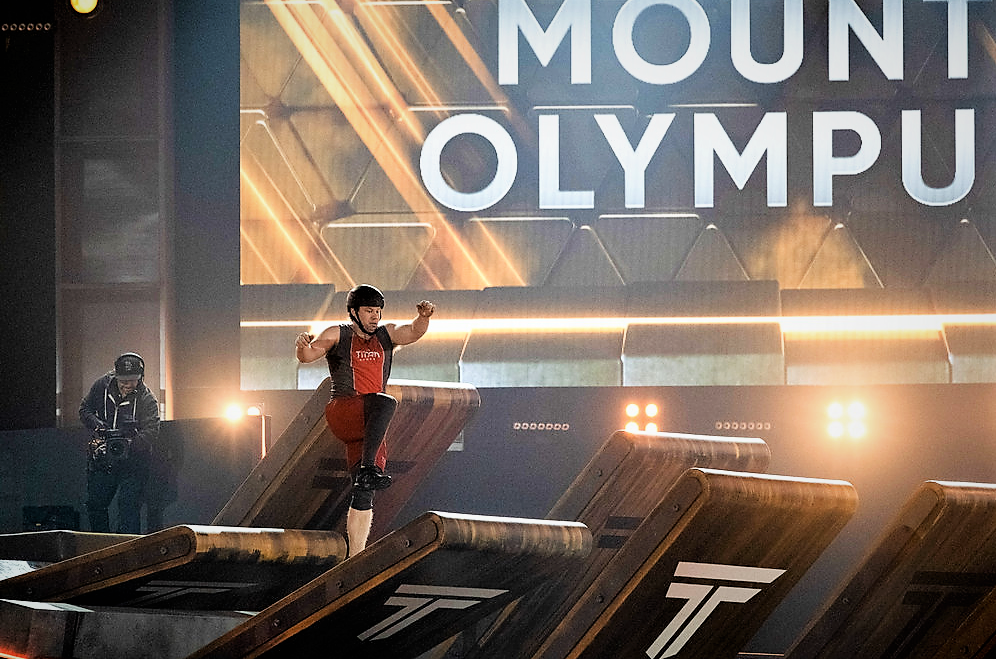 Will Sutton moves through the “Drop Zone” portion of Mount Olympus during NBC’s The Titan Games. (Contributed photo)

Croatan agriculture teacher Will Sutton flashes his fun-loving side with a big grin during a commercial break in his first appearance July 13 on NBC’s The Titan Games. (Contributed photo)

Croatan jayvee basketball coach Will Sutton has defied the odds and earned a spot in Monday’s Eastern Region final on NBC’s The Titan Games. (Contributed photo)

Will Sutton moves through the “Drop Zone” portion of Mount Olympus during NBC’s The Titan Games. (Contributed photo)

OCEAN — When Croatan agriculture teacher Will Sutton was chosen to participate in NBC’s The Titan Games, he called it the “opportunity of a lifetime.”

The question for the viewers at home was, exactly how long did that opportunity last?

The 26-year-old Trenton native’s family, friends and students watched in glee as he defied the odds with a dominant, odds-defying victory over UFC fighter Tyron Woodley in his first episode July 13. Then he made it to the next episode, and the next, winning convincingly each time. Now he’s locked in as a Mount Olympus competitor in the Eastern Region final slated Monday.

A win there would pit him against Western Region champ Noah Palicia and Central Region champ winner Matt Chan. The male and female winners of each region will compete against each other for the right to win $100,000 and become this season’s Titan.

“I’m blessed with the opportunity to go out there and showcase my abilities,” Sutton said last Monday night after the episode aired. “I’m thankful for everyone surrounding me and giving me all the praise and support. I just thank God for the opportunity.”

Sutton’s regional final matchup won’t be known until the episode airs. The previous losing contestants on Mount Olympus, including Woodley, world-ranked professional long driver Ryan Steenberg of Rochester, N.Y. and active duty soldier Josh Porter of Fort Bragg, will compete Monday for the right to battle Sutton again. Steenberg may not compete after he injured his left bicep during his Mount Olympus run on July 20. Neither Steenberg nor Porter were able to finish the grueling obstacle course.

“You got to have some muscle endurance and be in tip-top physical shape,” Sutton said. “It’s a beast of a course. (Host) Dwayne ‘The Rock’ Johnson didn’t make it easy for anybody. The next time I go up against somebody, though, they’ll have run it before just like me. So, the playing field is a little more even now.”

Last week, Porter gave Sutton his best competition, staying neck-and-neck with the schoolteacher until he took a spill out of the “Cage Crawl” section of the Mount Olympus course. Porter never recovered and was unable to pull the 300-pound “Ball & Chain” to the final stage of the course, the “Titan Tomb.” For the second week in a row, the 5-7, 180-pound Sutton finished the course alone and unchallenged, staying humble but flashing a grin when Johnson pulled the safety glasses off his face for a celebratory interview.

Sutton appears to get better at the course each time, going through certain stages a hair faster and maintaining the level of strength needed to finish. The course sees contestants climb and crawl under the “Starting Gates,” flip heavy boxes three times in “Box Flip,” use two reverse-locking grips to lift themselves up and an incline in “Iron Ascent,” lift a 200-pound pillar up a steep incline in “Log Lift,” lift five weights totaling 120 pounds off a pillar to release the “Sky Bridge,” rotate the “Crank Down” to release the second half of the bridge, crawl through an angled, three-layer cage in “Cage Crawl,” descend the quick-release steps in the “Drop Zone” and pull the 300-pound “Ball & Chain” to the “Titan Tomb,” where they use a sledgehammer to crack through two layers of concrete to the awaiting “relic.”

When Sutton first appeared on the show, he competed with New Jersey DJ Kareem Brinson in a best-of-three series of challenges, allowing him ample screen time to flash his contagious and cheerful personality and, of course, a true Southern mullet.

“I try to keep things interesting, keep people on their toes,” Sutton said. “I like to have fun when I’m out there. And I don’t know what’s going to come out of my mouth in a given minute, let alone the other people. So, I just try to keep it loose. I think I quoted (Talladega Nights’) Ricky Bobby (Monday) night. ‘I don’t know what to do with my hands.’”

Sutton’s hook each episode has been the phrase, “Country Strong,” emblematic of his farm-raised childhood in Trenton. He wants people to know that not having typical “gym strength” isn’t a hindrance to meeting the kind of physical and mental demands of a contest like this one.

“That’s what (host) Dwayne ‘The Rock’ Johnson wanted,” he said, “to show what everyday people were capable of with the right attitude and a hard work ethic. You can go a long way in life with those things. People who are raised in rural America, they get underestimated sometimes. They don’t go to the expensive camps and expensive showcase tournaments, but they’re strong. They’re out there working every day, working on family farms and building muscles.”

For Sutton, his victories came months ago when the episodes were filmed before COVID struck in mid-March. He still has to keep his eventual finish a secret, but each week, the burden gets a little lighter.

“It was hard,” he said. “You couldn’t tell people you were on the show for two or three months after it had been filmed and wrapped up. I wanted to tell people, and I just had to wait. God had blessed me with this opportunity of a lifetime, so it was really hard to keep that quiet.”

Sutton still remembers the phone call he got in February, shortly before filming of the show began. He had just finished a long day of fishing and didn’t recognize the number.

“I almost didn’t answer it, but I did and it was him, Dwayne Johnson,” Sutton said. “I was just in my room, and he was calling me. It was one of the coolest moments of my life.”

The actual episodes were all filmed in Atlanta, with athletes representing either the east, central or west regions. Episodes are divided into groups of four male and four female contestants, competing against each other until the two sets of finalists compete on an obstacle course named Mount Olympus. When the time came for Sutton to compete, there was no time to anticipate exactly what he would be asked to do.

“There’s no way to prepare,” Sutton said. “You can’t watch anyone else do it, you can’t practice yourself. It’s just a matter of thinking on the fly and reacting.”

Sutton is a 2012 graduate of Jones Senior High School, where he played baseball and basketball. After attending Methodist University and playing baseball for one year, Sutton transferred to North Carolina State to pursue a major in agriculture business. He also played for the club baseball team at the school. He received a master’s degree from North Carolina A&T and now teaches agriculture at Croatan, where he serves as the assistant baseball coach and the jayvee boys basketball coach. His jayvee hoops team has been conference champions two of the last three years.