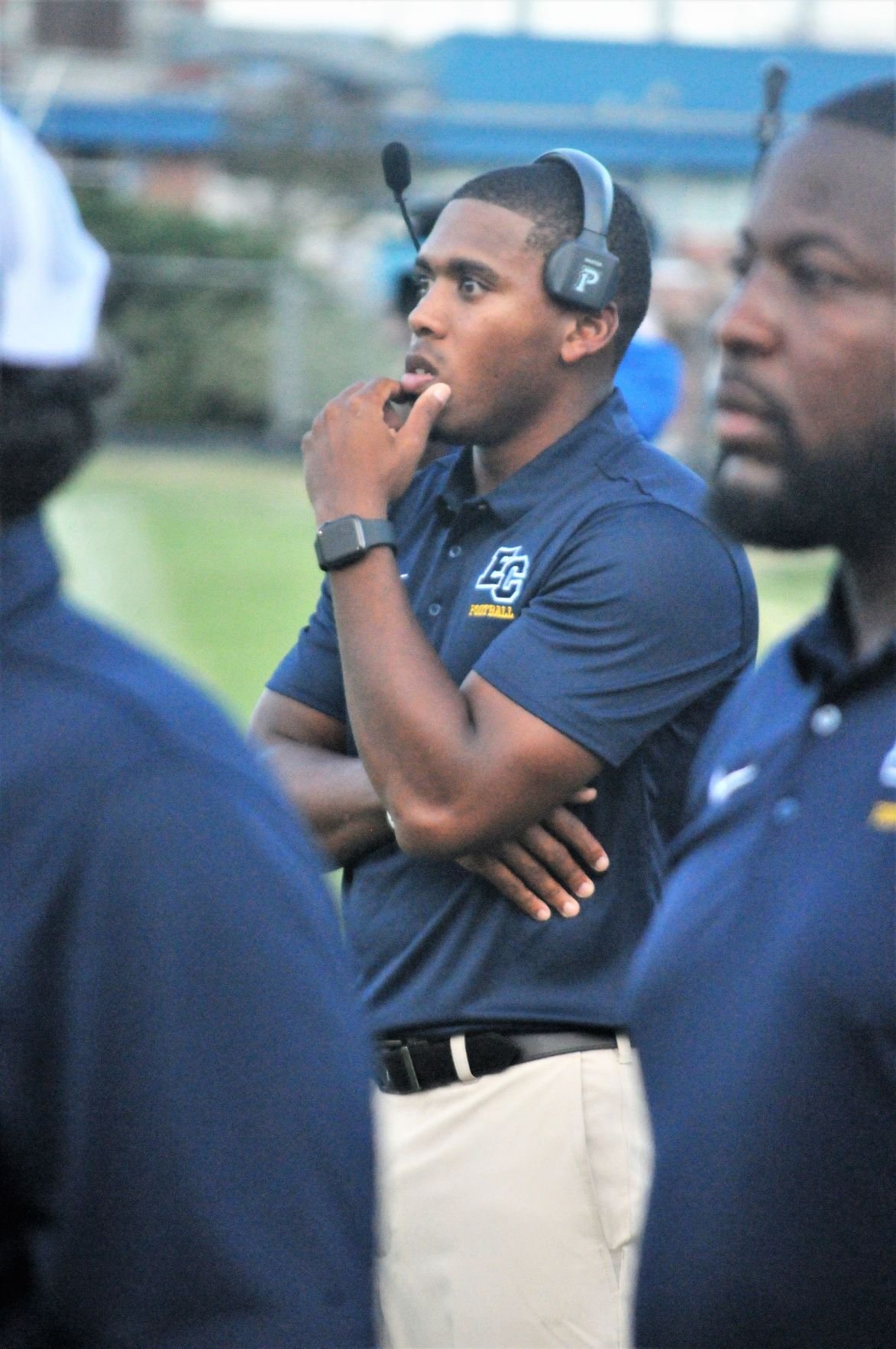 B.J. Frazier, seen here during football season, was prepared to lead the East Carteret girls track and field team to a 1A state championship this spring. (J.J. Smith photo) 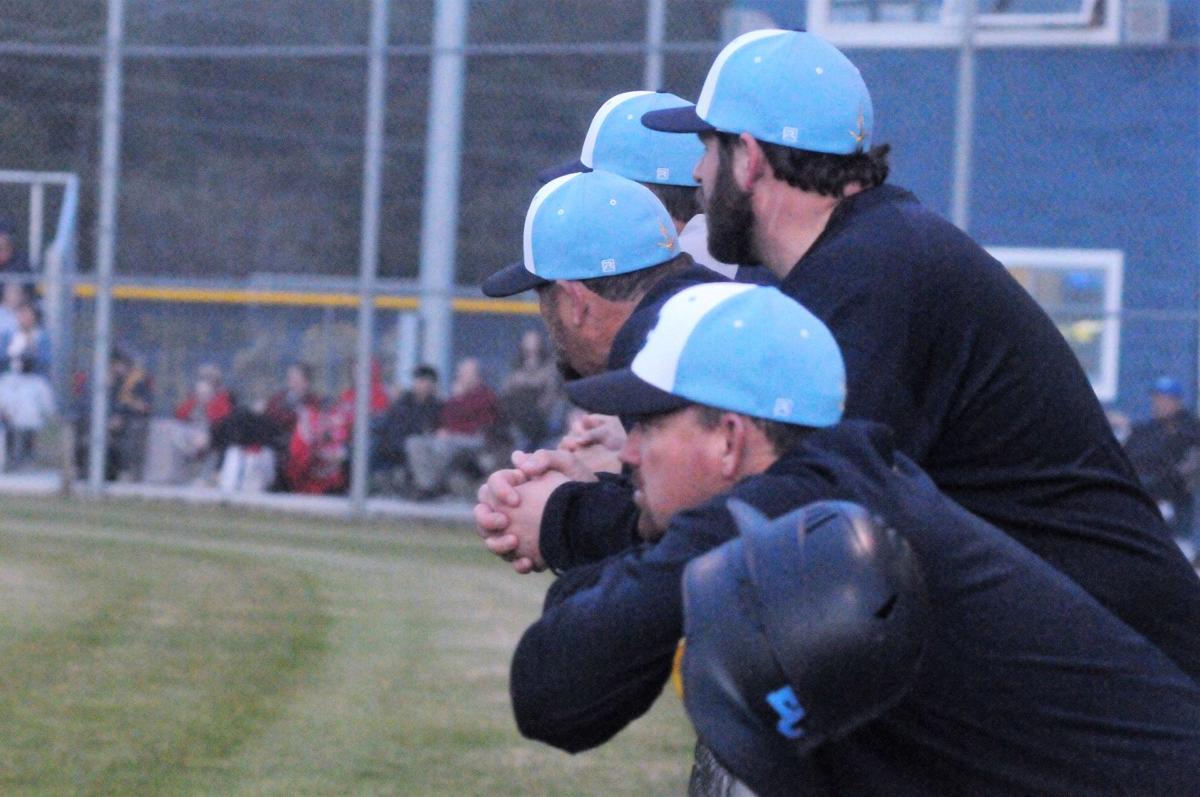 Daniel Griffee, nearest, was ready to lead the East Carteret baseball team to a 1A state championship this spring. (J.J. Smith photo) 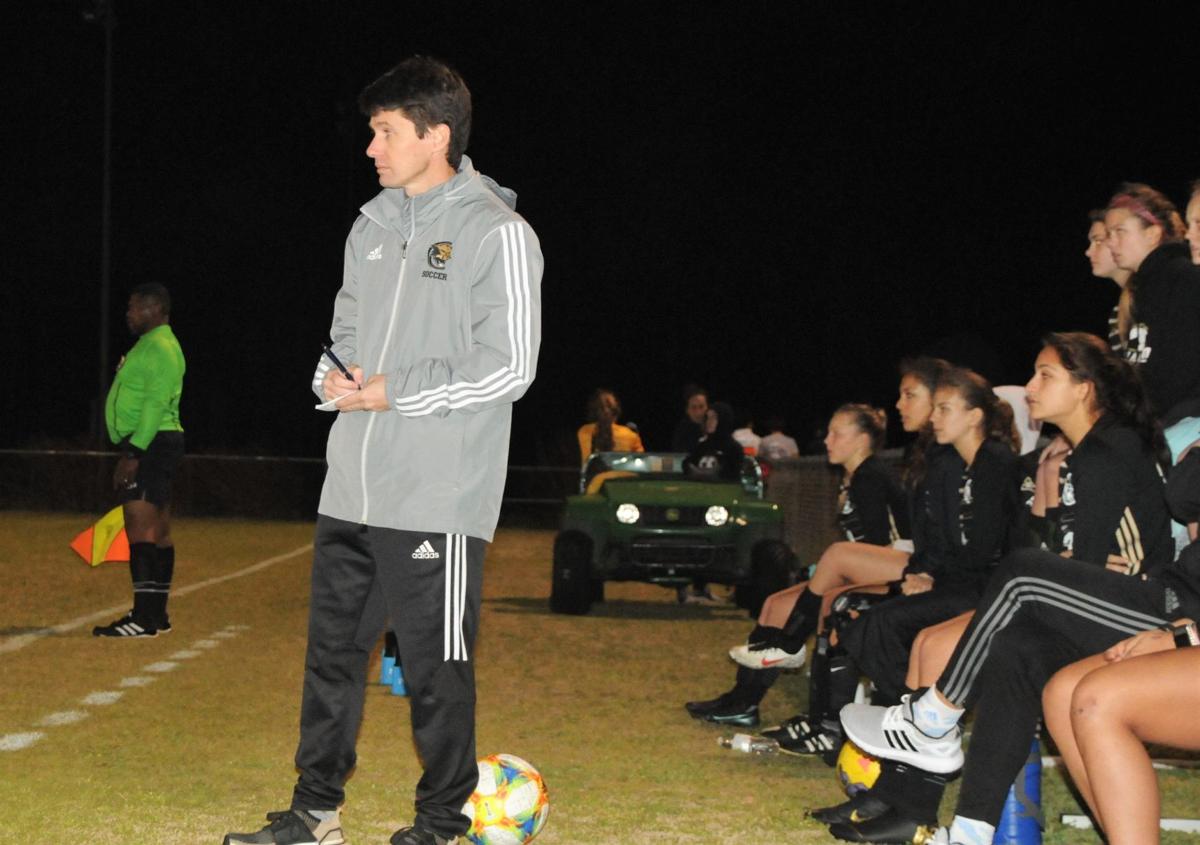 Paul Slater had the best chance in his 13 years as a Croatan coach to lead the girls soccer team to a 2A state championship. (J.J. Smith photo)

B.J. Frazier, seen here during football season, was prepared to lead the East Carteret girls track and field team to a 1A state championship this spring. (J.J. Smith photo)

Daniel Griffee, nearest, was ready to lead the East Carteret baseball team to a 1A state championship this spring. (J.J. Smith photo)

Paul Slater had the best chance in his 13 years as a Croatan coach to lead the girls soccer team to a 2A state championship. (J.J. Smith photo)

MOREHEAD CITY — While the cancellation of the spring high school sports season due to the coronavirus pandemic was painful for everyone, it was particularly gut-wrenching for three county teams.

The East Carteret girls track and field and baseball squads and Croatan girls soccer club dreamed of seasons that resulted in banners in the gym and rings on fingers.

Each of the trio had legit state championship aspirations.

B.J. Frazier told the Mariners before last season they had the potential to win a state title.

Murphy earned its second straight state crown with 49.5 points, followed by East with 47.5.

“I felt like we had a better chance this year than we did last year,” Frazier said. “Murphy would have been the team to beat again, but I thought this was definitely the year.”

The Mariners had a six-point lead last season when the Bulldogs lined up for the final event of the meet, the 1,600-meter relay. They took second in the race by less than half a second in front of third-place Highland Tech to earn eight points and take the state title.

East was aiming to capture the program’s second state title. The Mariners won the 2A state crown in 1993.

And like any team that comes up just short, the drive to get a ring started at the moment it lost.

“At the end of last year, the girls were focused and said this year was going to be the year for us to do it,” Frazier said. “We legitimately had a huge chance this year, and our girls knew it.”

The excitement from that performance and Frazier’s recruiting efforts in the school hallways led to a robust turnout this spring with 57 boys and girls trying out. There are usually 25-30.

“We had big numbers,” the third-year coach said. “Numbers like I haven’t seen before.”

Despite losing a big point producer in Breah Taylor (three gold medals and a silver medal) as well as Tierra Benders (seventh in high jump), Frazier felt this team was stronger and deeper.

“You’re talking about 48 points there, and that is almost the point total that won the state championship last year,” Frazier said. “Andralyn and Cece entered spring with a head of steam after the winter.”

At the 1A/2A winter indoor state championship, Johnson earned a bronze medal in the long jump with a 17-feet, 3.75-inch leap. She was just two inches from adding another bronze in the triple jump, measuring out a 34-11.5 leap to take fourth.

“Pancha moved in from New Mexico where she was a top performer,” he said. “In practice, she was throwing farther than the girl who won the state championship last year. Kaliah is super fast. She was right behind Andralyn, so she probably would have gotten us points.”

Makayla Brazelton would also have been counted on to provide points. A surprising performer at last year’s state meet – she was a member of gold- and silver-medal relay teams – Brazelton was primed to finish strong in the 400 meters.

“She had already PR’d in practice,” Frazier said. “So, there are more points. And I haven’t even included our relays, and we’ve been strong in relays for the past two years.”

On a positive note, most of the team, except for Brazelton, will return next year.

“We’ll have a good group next year,” Frazier said. “We’ll come back strong. I just hate it for the kids. These girls knew in their hearts they had a chance to win it.”

The Mariners only went to the third round of the 1A playoffs last season, but it’s what happened after that loss that gave the club confidence it could capture a state crown this spring.

After taking a 6-5 lead on Rosewood going into the bottom of the seventh inning thanks to a four-run frame, East gave up two runs in the bottom of the inning to fall 7-6 and see its successful season come to an end.

The 1A/2A Coastal 8 Conference champion finished the campaign with a 16-7 mark thanks to an impressive 15-3 stretch to close the season.

Rosewood went on to win in the fourth round and regional final before finishing as the state runner-up.

“When we lost that game, our kids walked out of there, and they knew they had the opportunity to be the best in the state,” East coach Daniel Griffee said.

Griffee returned for his second season at the helm, as did all but one starter. All-conference standouts Chase Eaton, Donald Garner, Grant Nelson, and Bennie Brooks were set to make up the nucleus.

“We had two really good pitchers who could give us seven innings every night,” Griffee said. “And if for some reason they couldn’t, we had a bullpen to get us through. We also had solid hitters one through nine.”

Eaton and Garner also got it done last season at the plate.

Nelson and Brooks were sharp at the dish as well.

The Mariners were extremely aggressive on the base paths while also amazingly efficient, swiping 77 stolen bases on 83 attempts in 2019 with Eaton (21) and Brooks (16) leading the way.

“We could really run,” Griffee said. “We had a really solid defense with a good catcher (Mason Rose) behind the plate. We had it all.”

Eaton, Garner and Grant Nelson will graduate in just a few weeks, taking with them the team’s top two pitchers and its best hitter.

East has visited the state finals once in school history, falling to Piedmont in 1984.

“For every coach, the goal is to win a state championship, and some have a better opportunity than others,” Griffee said. “Some never get that opportunity, and we were lucky enough to be in that situation. I don’t know if it will ever happen again.”

The Cougars have never visited the state finals but came achingly close in 2014 with a 1-0 loss to Washington in the 2A east regional final.

“I remember we were moving the ball, and we had a chance to score in the first 10 minutes,” Croatan coach Paul Slater said. “We missed, but I didn’t think there was any doubt we were going to win that game.”

The Cougars haven’t been back to the regional final since, however, they came close last season, advancing to the fourth round before dropping a 2-1 contest to a Clinton club that fell 2-1 in the regional final to eventual state champion Carrboro.

“That is another game where I felt we looked good early and I thought we had it,” Slater said. “We played Clinton three times, losing 2-1 when we didn’t have the basketball players and then beating them 3-1 when we had everyone.”

And while those are the best teams in program history, they went about it in very different ways. The 2014 team received 53 of its 82 goals from freshman Tori Riggs (27) and senior Karlie Yeomans (26).

“We were top heavy in 2014,” Slater said. “This team was going to be a lot more balanced. We had Tori and Karlie. They were the goal scorers, and we were solid in the back. But we could get scoring from a lot of spots this year. You couldn’t take away just one player, because we had two or three or four more that could pick it up.”

“We brought back all but one starter,” Slater said. “And we had seven seniors. It’s not just the talent, which we had plenty of, but it’s the experience of playing at a higher level.”

Slater has taken a few other teams to the fourth round in his 13 years as coach in addition to last year’s squad and the 2014 east regional club, but this was the year to do something big.

“We were looking at it as a state championship or bust year,” he said. “This was definitely the team to do it. This was the year. Everybody in the east was gunning for us, so that would have made things interesting. We really missed out on something here.”