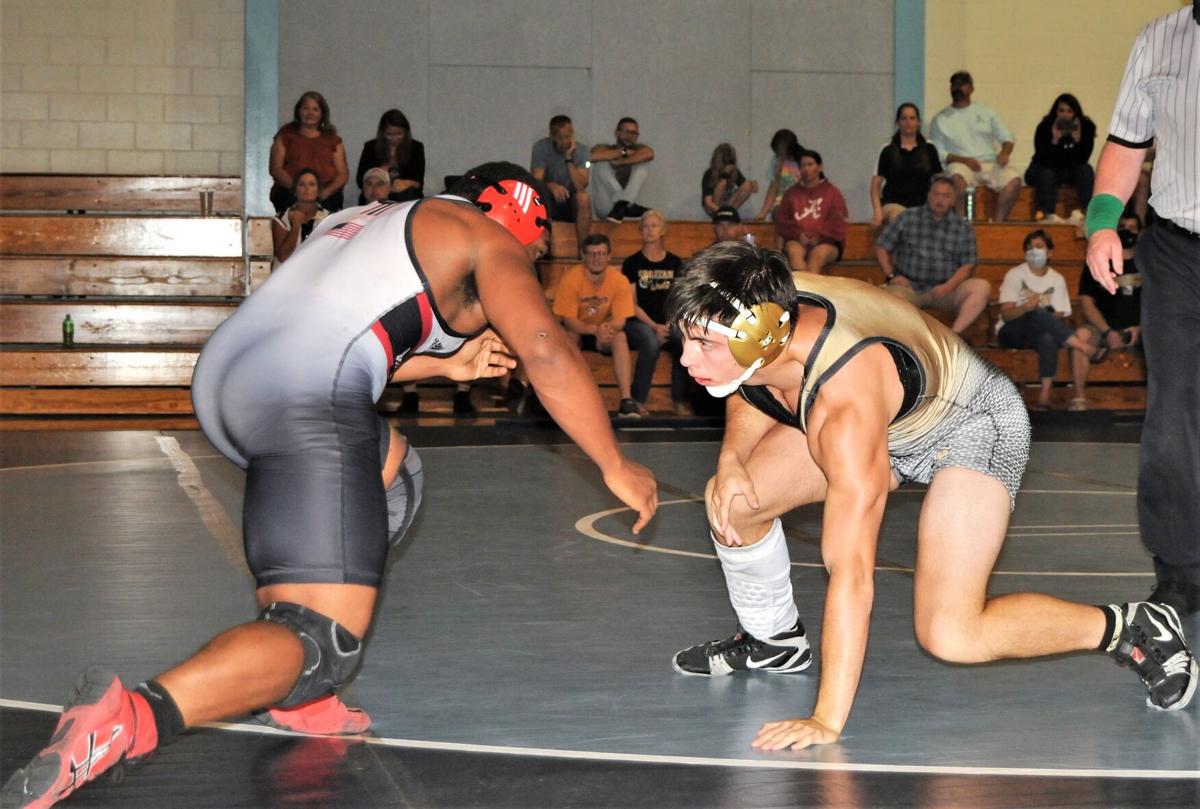 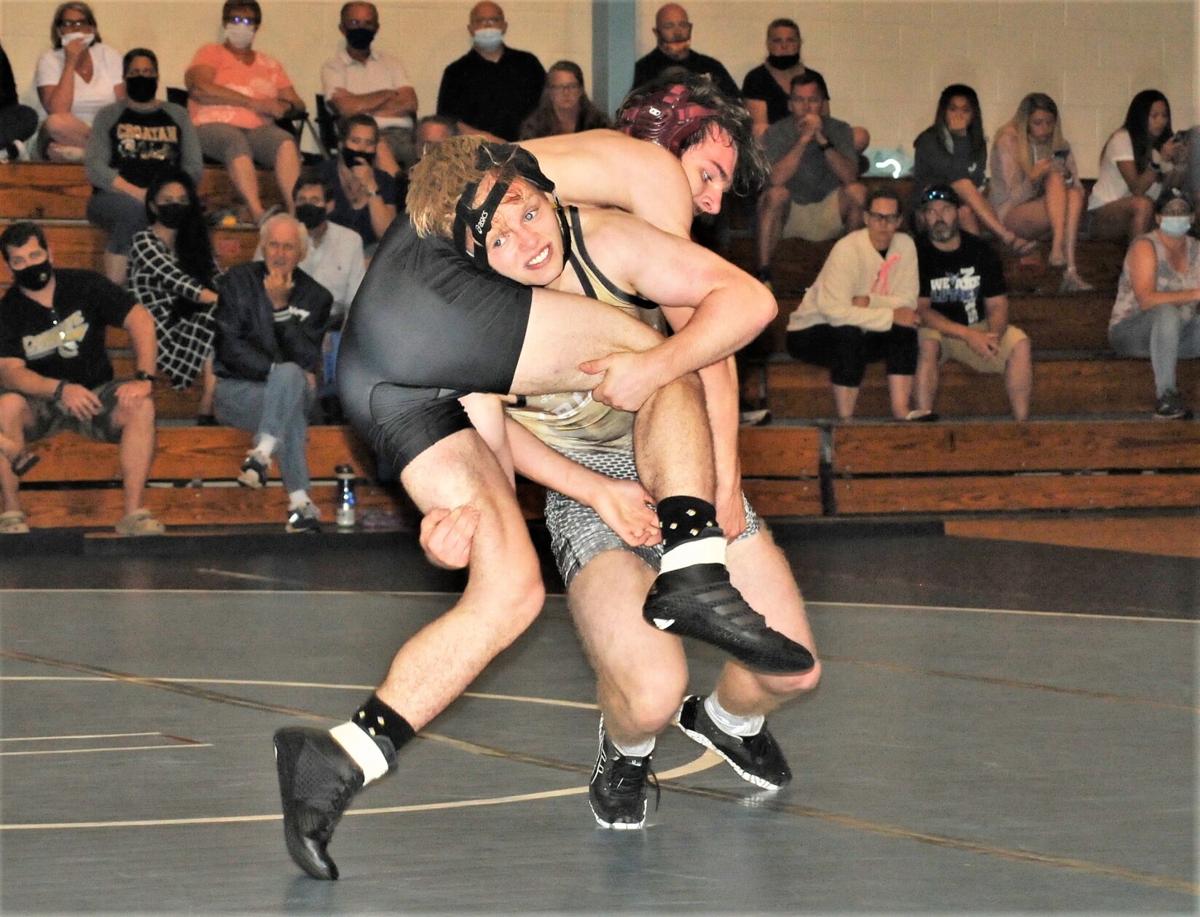 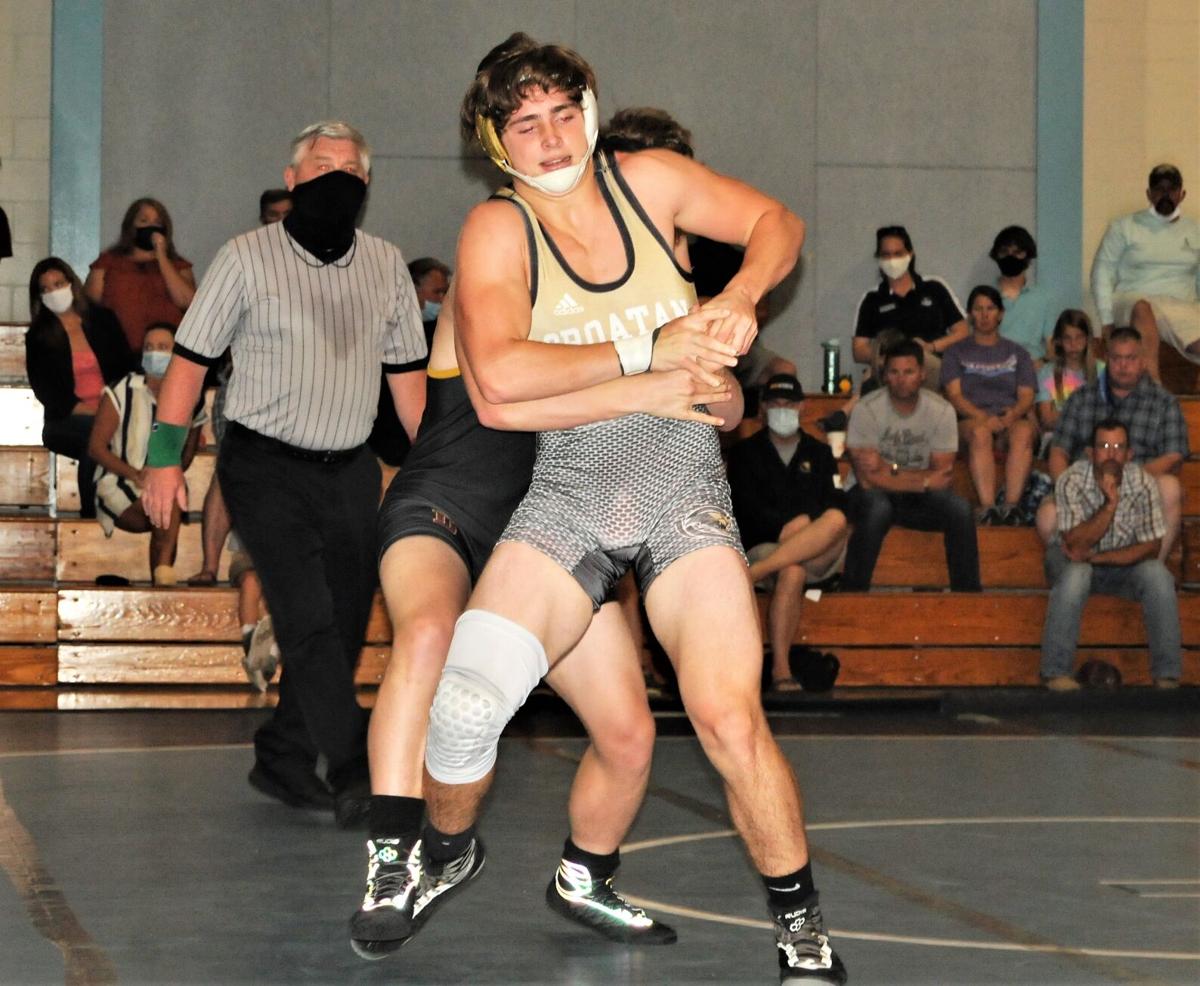 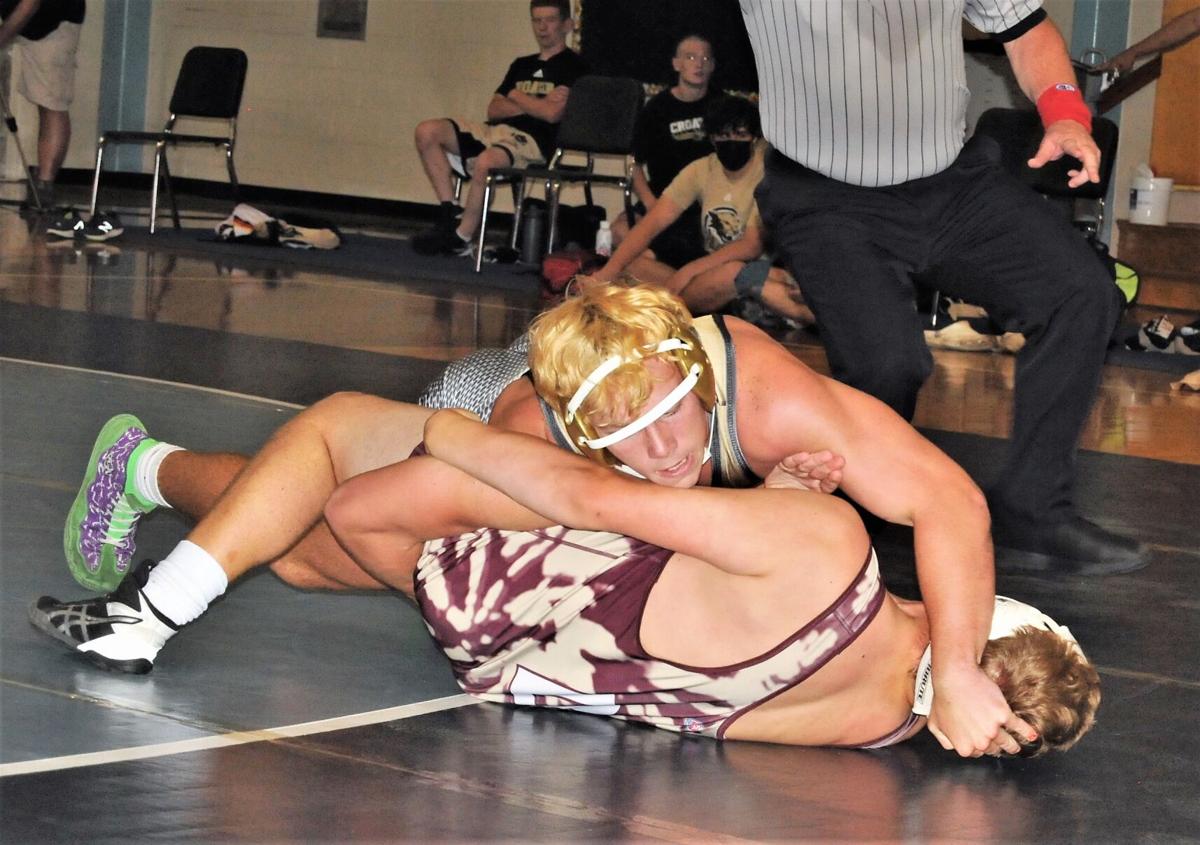 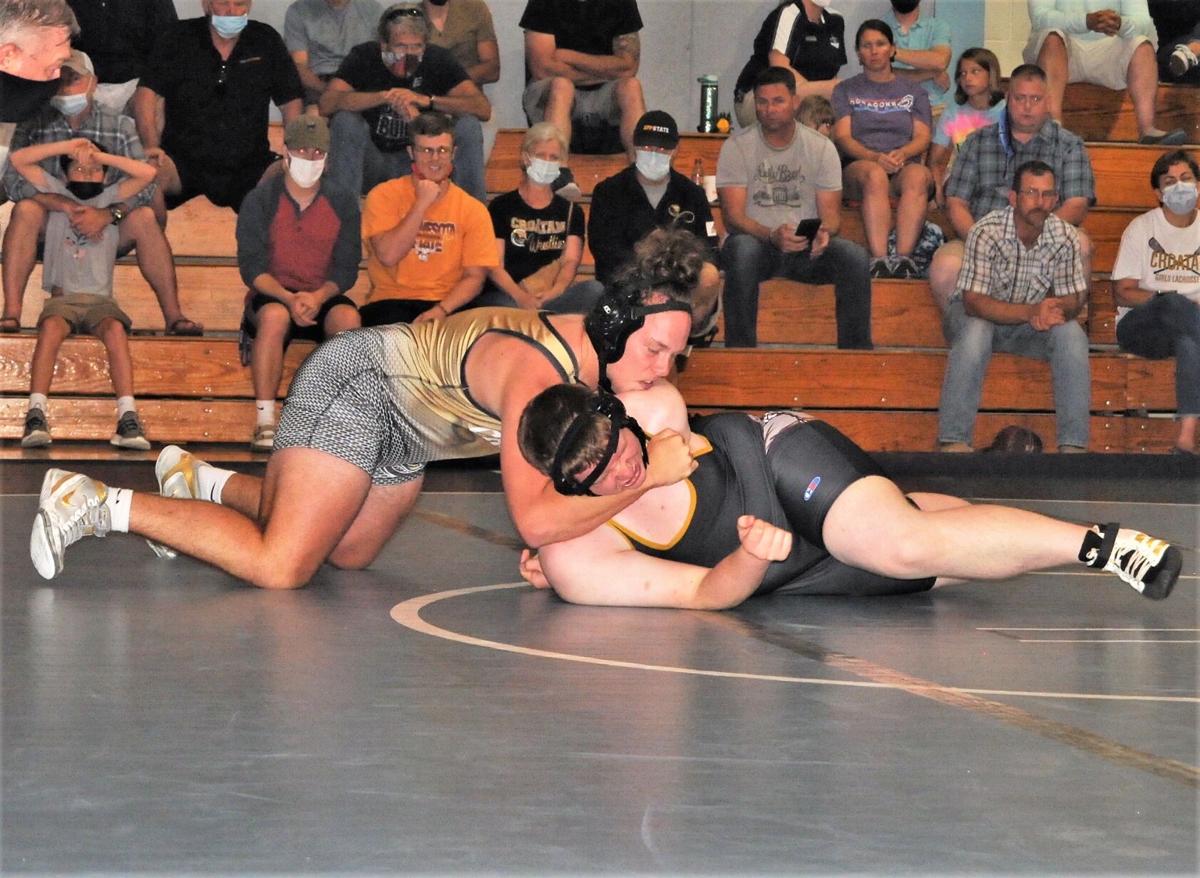 BROAD CREEK — Each league wrestling season for the past seven years has come down to Croatan and Dixon, and this year is no different.

Only Southwest Onslow is also now in the mix.

Dixon defeated Croatan 42-31 on Wednesday night in a tri-match including New Bern at Broad Creek Middle School to move to 5-0 in the 1A/2A Coastal 8 Conference.

Like Dixon, Southwest Onslow is unbeaten in league action as well.

The three teams will take part in a double dual match this Wednesday at Southwest with Croatan taking on the Stallions in the first bout and Southwest and Dixon meeting in the second.

“Someone will be the champion that night,” Croatan coach David Perry said. “It could be all three of us. I’m not pulling for Southwest in the first match, but we’re all in for them in the second match.”

Croatan has won the last two conference titles, while Dixon won the two before that, including the last one before realignment in the 2A East Central Conference.

The teams shared the ECC title in 2014 and 2016, while Dixon won it outright in 2015, giving it five titles in the past seven years to the Cougars’ four.

The rivalry will continue next season as both teams move up to 3A and stay in the same conference.

The Bulldogs didn’t look like a team ready to contend for another league crown when the season began with a 53-14 nonconference loss to Southwest in the second match of the year.

“We came a long way,” Dixon coach Chris Brothers said. “I’m very impressed with their resilience, determination, hard work. This is a special group. It’s not how you start, it’s how you finish. We’ve put ourselves in position to do well, but the work isn’t finished. It will be an exciting night next week when we all wrestle.”

The Bulldogs are finally rounding back into shape after spending the bulk of May quarantining after exposures to COVID-19.

Isabel Rodriguez (120 pounds) was the star of the night for Dixon, starting the Croatan match with a pin to help her team build a 27-4 lead, and then ending the New Bern match with a late reversal to take a decision victory and give her squad a 39-38 win.

“She took care of business for us,” Brothers said.

The Bulldogs captured all six of the bottom weights (106-138) against Croatan, winning five by six points apiece due to three pins and two forfeits.

The Cougars overcame the 27-4 deficit and took a 31-30 lead with wins in five of six matches but dropped the last two, including one by forfeit.

“Giving up forfeits to Dixon hurts,” Perry said. “We knew down low we were going to have trouble. They have more experience there. Our strength is up top.”

The Cougars took six of the top eight weight classes (145-285), but it wasn’t enough as the Bulldogs were victorious in eight of the 14 overall matches.

“We had to wrestle well,” Brothers said. “We knew it was going to be close. We got the matchups we wanted in the middle weights. We needed those guys to perform, and they did.”

Dixon’s Adrian Desousa (9-3) tied his match 2-2 with Blake McCabe (11-5) with 17 seconds to go after trailing 2-1. In the sudden victory period, he earned two points with 20 seconds to go on a razor-thin call where both wrestlers were working to gain advantage.

“That didn’t help, but we needed more than that,” Perry said. “We still would have needed one more win.”

The Cougars rebounded in the nightcap with a 42-36 win over New Bern.

They held an 8-6 advantage in victories, taking five by pin, two by major decision and one by forfeit.

“We definitely wrestled better against New Bern,” Perry said. “I thought we wrestled pretty well in that match. It helped ease the sting a little bit from the first match.”

Ryan Lindsay and Zach Lindsay each collected another win via pin, as did Luke Walker (12-4) and McCabe.

Dakota Gray took a 7-5 decision against Marcus Grist, who last season took third in the state in the 4A tournament.

Here are results of the matches: