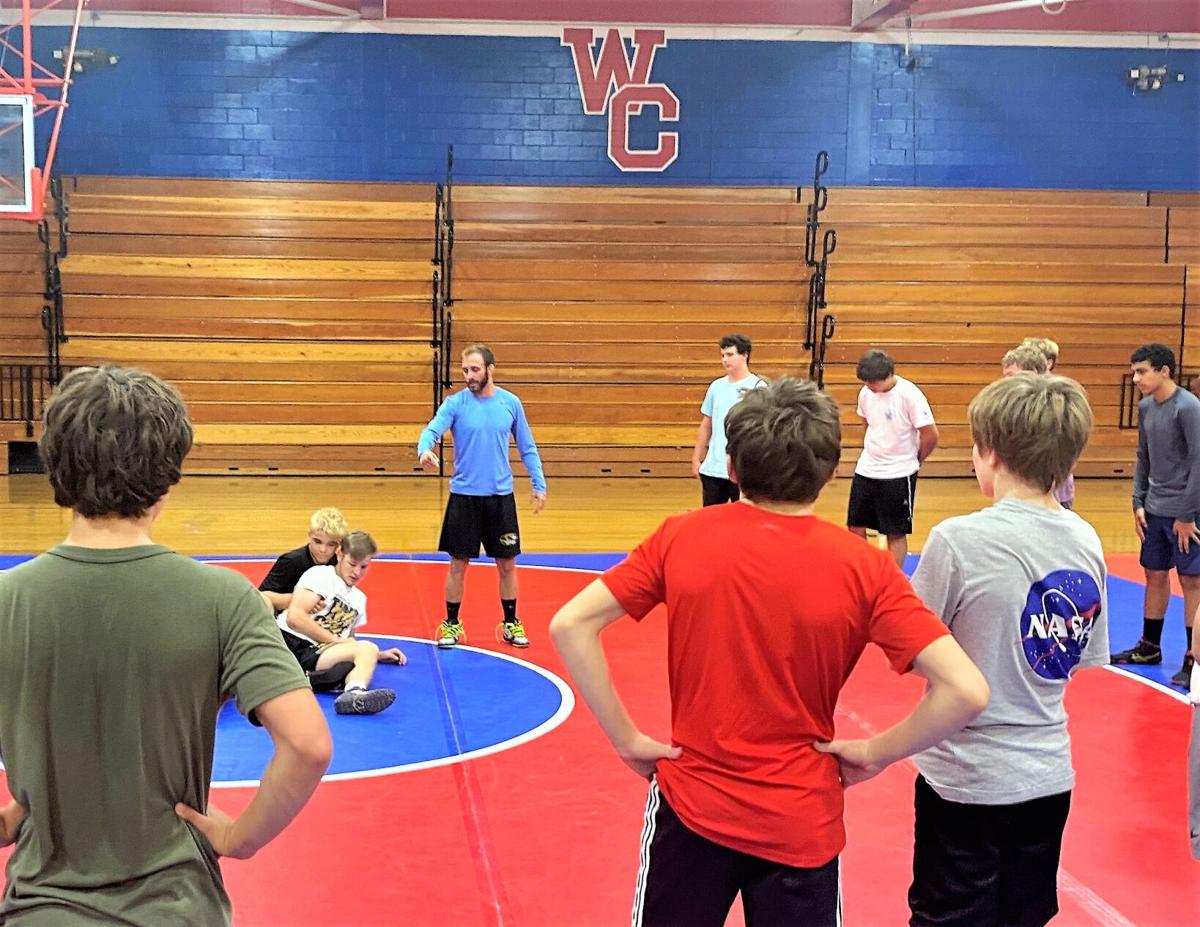 Missouri standout and 2015 alum Alan Waters works through a series of drills at a wresting camp at West Carteret on Thursday. (Zack Nally photo)

Missouri standout and 2015 alum Alan Waters works through a series of drills at a wresting camp at West Carteret on Thursday. (Zack Nally photo)

MOREHEAD CITY — There are a lot of places the student-athletes at West Carteret this week could have spent their time.

Choosing a wrestling mat over the beach or the pool during a hot summer like this one takes a level of dedication West coach Kevin Smith likes to see.

“Anytime you get to keep your wrestling shoes on and learn something or make something better, that’s what you want,” he said.

It was the second such camp at the school, following one in 2019 that featured Smith’s cousin, Brian, the head coach at Division I Missouri, a perennially nationally-ranked wrestling program.

The COVID-19 pandemic canceled last year’s event, and this year, the Tigers coach had a prior commitment, so Smith tapped Missouri alums Alan Waters and Boomer Boyd.

“These guys are top shelf,” Smith said. “They bring in the same techniques they learned at Missouri.”

The pair operate a Wilmington-based club called Innovate, where they hope to grow the sport of wrestling in the area.

“We’re trying to grow the sport out here,” Waters said, “bring it more awareness and use it as a vessel in kids’ lives to give them a purpose and see how they can use the sport to improve the other areas of their lives. I like the sport of wrestling, and I like to be around it. I have a lot of knowledge to give, and I really enjoy giving that to young people when I can.”

Waters brings with him a standout reputation as four-time high school state champion in Kansas City and a Fargo national championship in both freestyle and Greco-Roman style wrestling. He was a two-time All-American and three-time conference championship at Missouri, where the 2015 graduate still holds the second-most overall career wins. He was one spot away from reaching the 2016 Summer Olympics in Rio de Janeiro.

West junior Joshua Knipe, the only returning state tournament qualifier for the Patriots this season, was appreciative of the extra expertise.

“Just like with everything,” he said, “having someone who specializes in a certain field come in and teach what they know best is really valuable.”

The 220-pound regional tournament placer was at the camp all three days, soaking in the wrestling expertise, knowing it will pay off when the season begins in November.

“Something like this helps us develop technique over the offseason, even if we’re not in the best condition,” Knipe said. “We get in early, and by the time the season starts, we can be at our full potential.”

Waters and Boyd worked with the campers through a range of skills, but the focus was on mastering the basics.

“We’ve done a lot of the drills we do at Innovate and Missouri, stuff like positioning and stance,” Waters said. “Getting the fundamentals is what’s most important. We showed the guys a few fun moves, but you don’t need anything fancy out there if you have the fundamentals locked down.”

Skills aside, what impressed Waters and the other coaches the most was the commitment on the campers’ parts to take the time away from summer fun to put in work and make themselves better wrestlers through physical rigor.

“It’s a unique sport,” Waters said. “It’s a different grind. You’re putting your body through a lot of stuff and a lot of time. The only reward is self-fulfillment. I like to see their dedication. They don’t have to be there. They could be at the beach or just hanging out. It’s cool to see guys here who are motivated.”

There were more than just West wrestlers on the mat during the camp, but Smith is pleased with what he saw from his guys, particularly the young ones who will face a tough challenge in the fall. Campers ranged from rising eighth-graders to rising upperclassmen.

“We have a lot of young kids here,” he said. “I think we’ll have seven freshmen in our lineup next year, and most of them are here right now, which is great. That’s why it’s so important that we’re on the mat. We’re trying to revamp and get the mojo back, and this is the start of that.”