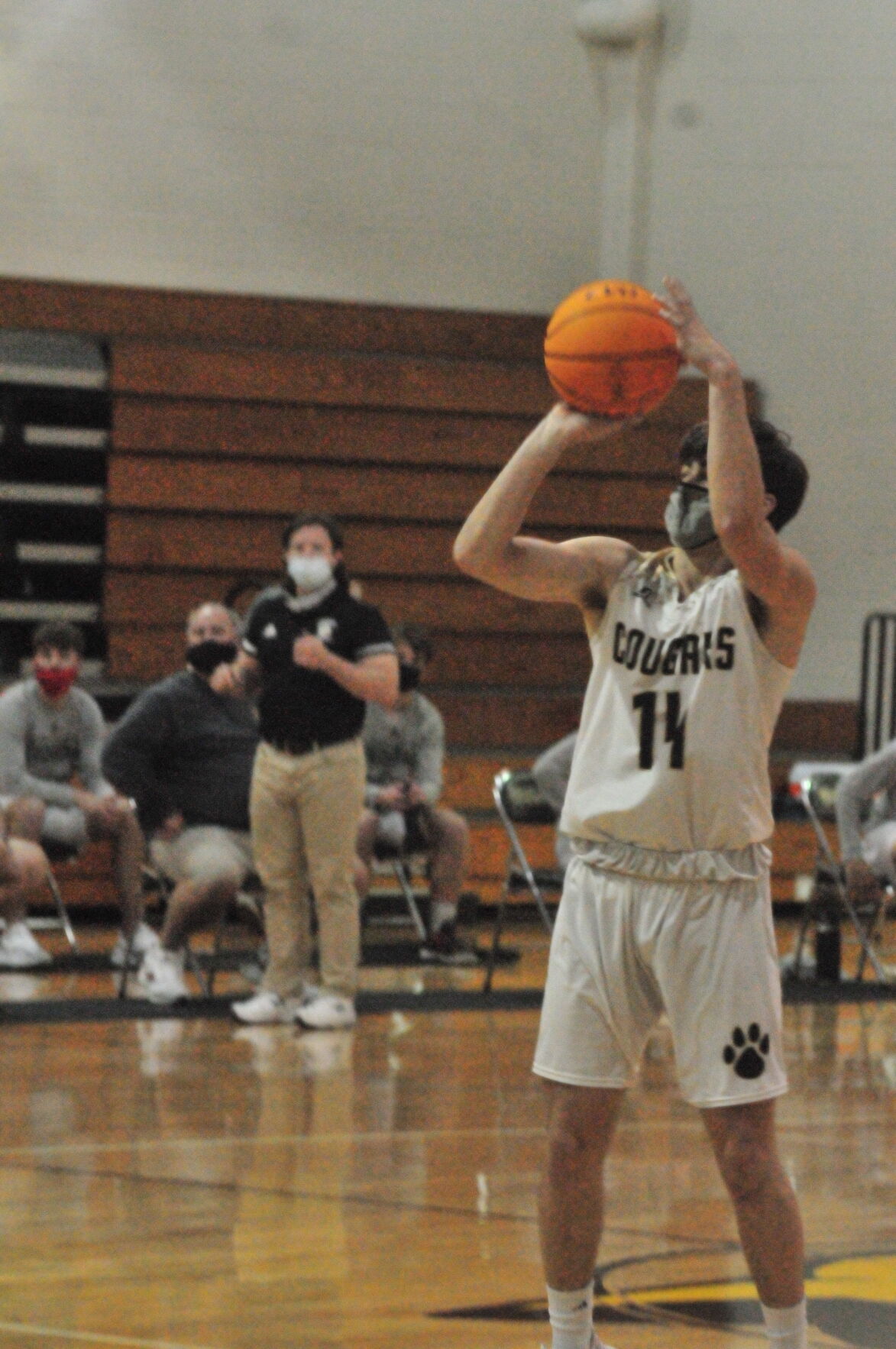 Croatan’s Brent Eilertson launches a three-point attempt Friday in the 70-34 win over Southwest Onslow. The junior scored a game-high 13 points in the victory. (Zack Nally photo) 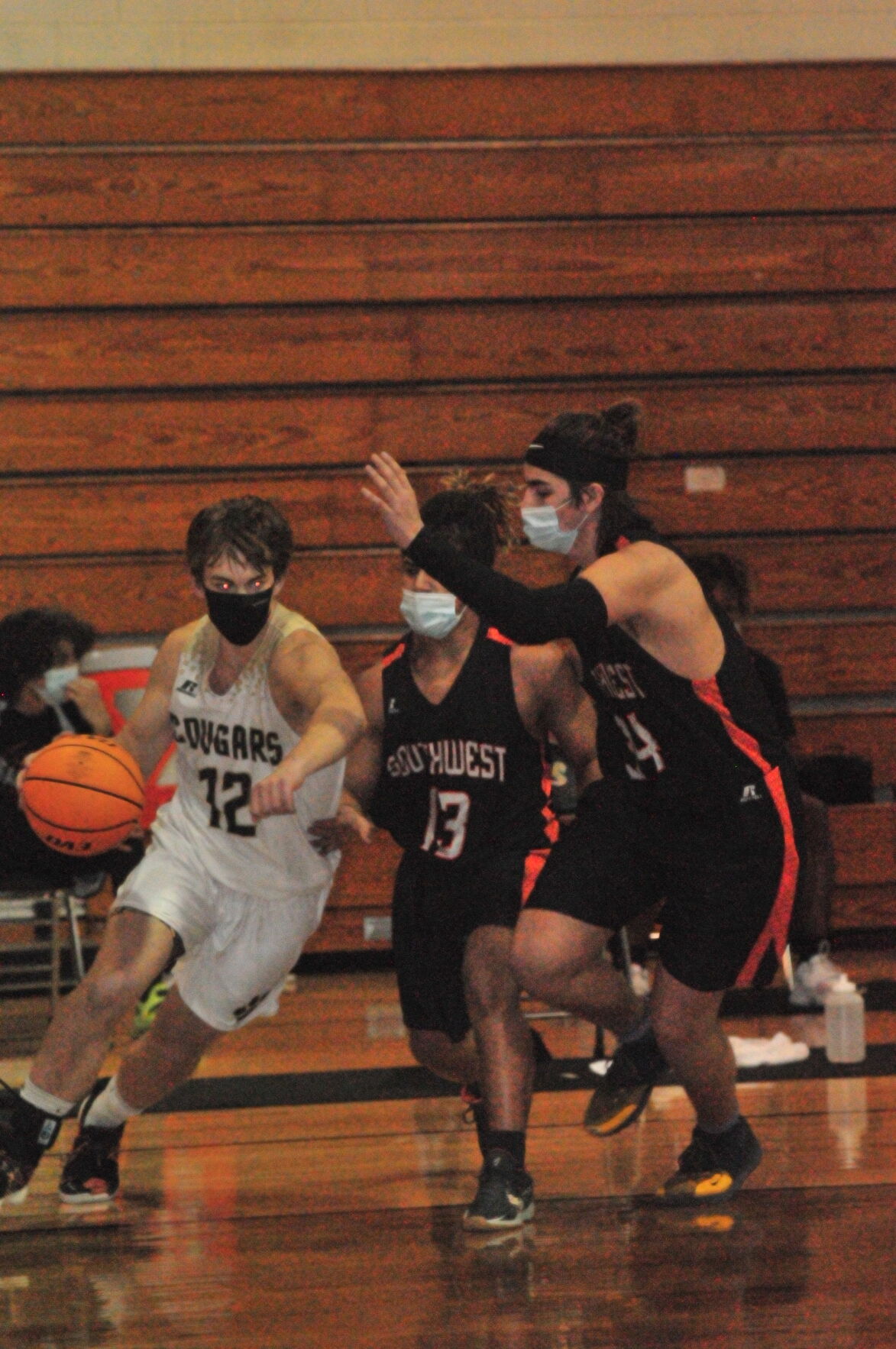 The Cougars’ Quincy Doneghy gets to the baseline for a pass to the post Friday in the win over Southwest Onslow. (Zack Nally photo)

Croatan’s Brent Eilertson launches a three-point attempt Friday in the 70-34 win over Southwest Onslow. The junior scored a game-high 13 points in the victory. (Zack Nally photo)

The Cougars’ Quincy Doneghy gets to the baseline for a pass to the post Friday in the win over Southwest Onslow. (Zack Nally photo)

OCEAN — The Croatan boys basketball team got its first win under new head coach Will Sutton, 70-34 over Southwest Onslow on Friday.

The Cougars opened their season Thursday with a 62-54 loss to Swansboro, their only nonconference warmup game before jumping right into the 1A/2A Coastal 8 Conference schedule. The program is looking to secure a better finish than fifth place, its best finish in the conference since it was created before the 2017-2018 season.

A 1-0 start in league play is a good first step, a win Sutton was hoping to get sooner rather than later.

“It’s always good to get the first one,” Sutton said. “It’s the hardest win to get sometimes. I’m just blessed to be with the program. The boys deserve all the credit and the coaching staff does too. They’ve all worked really hard.”

The Cougars were slow to score early in the game against Southwest Onslow (0-2), leaving the first quarter with just a 7-5 lead but going into halftime up 26-17.

The home team was visibly energized, and both teams spent time chirping back and forth after plays. For their part, the Cougars had two technical fouls called – one against Marshall Winstead and another against Dustin Hayden who missed out on the first quarter due to a technical in the season opener.

“Maybe we come out a little amped up, I don’t know,” Sutton said. “But once we settled down, we started hitting shots. (Against Swansboro), we didn’t hit those shots, but we played good enough defense to get back in the game. We just played so hard on defense from top to bottom. They were swarming to the ball, diving for balls, hitting the ground, getting those 50-50 balls.”

Scoring was low early in the game, but the Cougars were relentless on the boards, utilizing their tall roster to pull down multiple offensive rebounds per possession.

“We were crashing boards and boxing out really well,” Sutton said. “We didn’t give them hardly any second-chance points. We played very aggressive. But I felt like we played disciplined on the defensive end.”

Depth was on the side of Croatan, which fields a 13-player roster bolstered by nine upperclassmen.

“The boys have been pushing each other hard in practice,” Sutton said. “Every one of them is fighting for a spot. With nine seniors, everyone is trying to get on the floor.”

Croatan pulled away for its first big lead in the second quarter, with Hayden entering the game and sinking a three-pointer, Andrew Mendolia hitting a one-and-one foul shot after a contested layup and Jaxon Hall sinking a putback to put the Cougars up 17-7.

Shortly after the officials’ timeout midway through the second quarter – a timeout each quarter is taken due to the players having to wear masks on the floor – a Croatan and Southwest Onslow player were both sent off the court due to improper wearing of their masks.

The Cougars averaged 17 points in the second and third quarters, but they scored 29 in the fourth. Brent Eilertson scored eight of those points, Marshall Winstead seven, Hall six, and D.Q. Dillahunt, Eric Nutz, Ryan Bellamy and Mendolia two apiece.

Eilertson led the offense with 13 points, one of five Cougars to reach scoring double figures. The others were Hall and Mendolia with 11 each and Hayden and Winstead with 10 each.

The Cougars will be at home on Wednesday against Dixon in a bid to start their conference schedule 2-0.