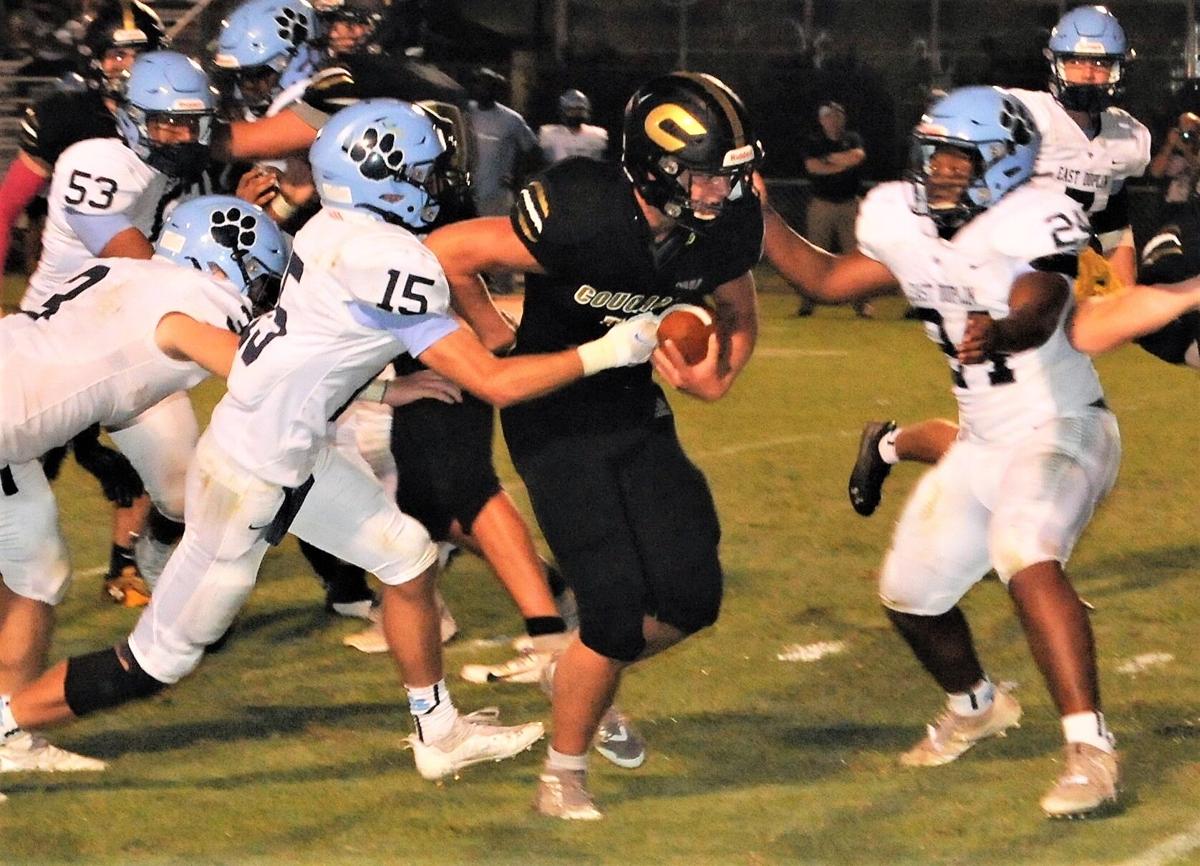 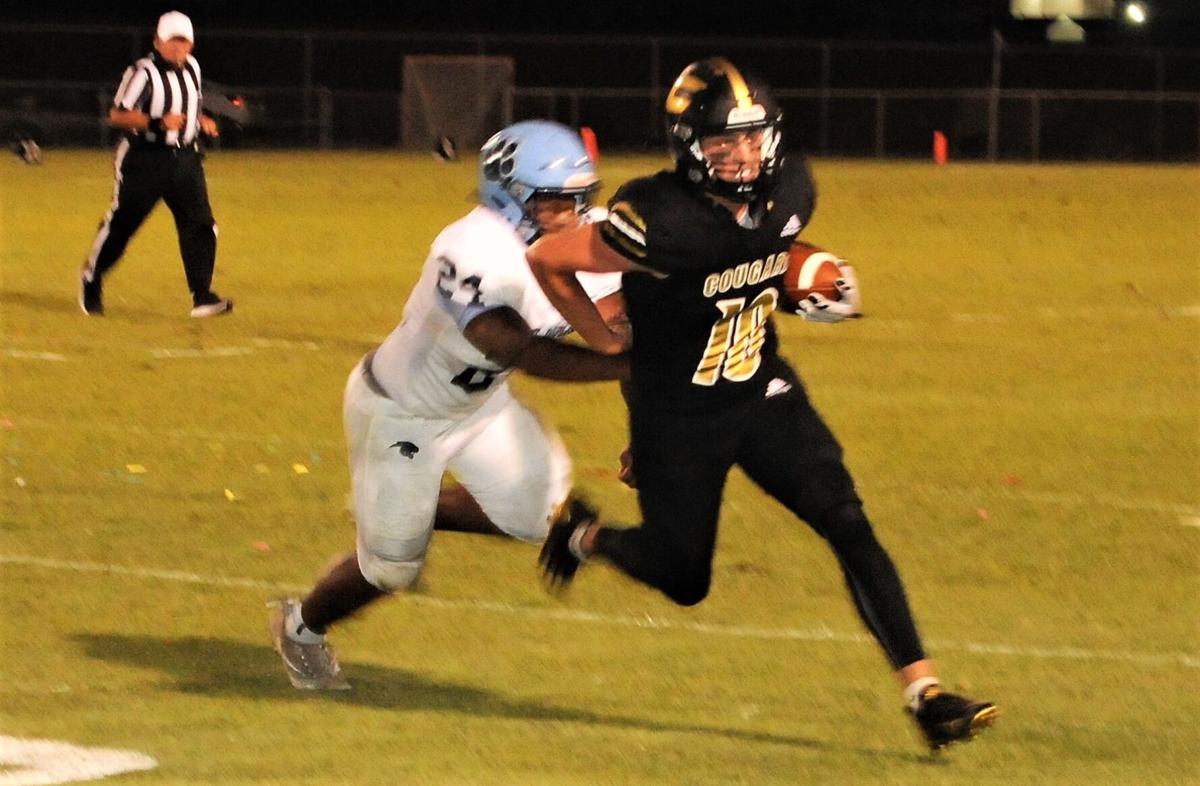 Croatan’s Evan King runs away from an East Duplin defender in the 34-7 loss to the Panthers. (J.J. Smith photo) 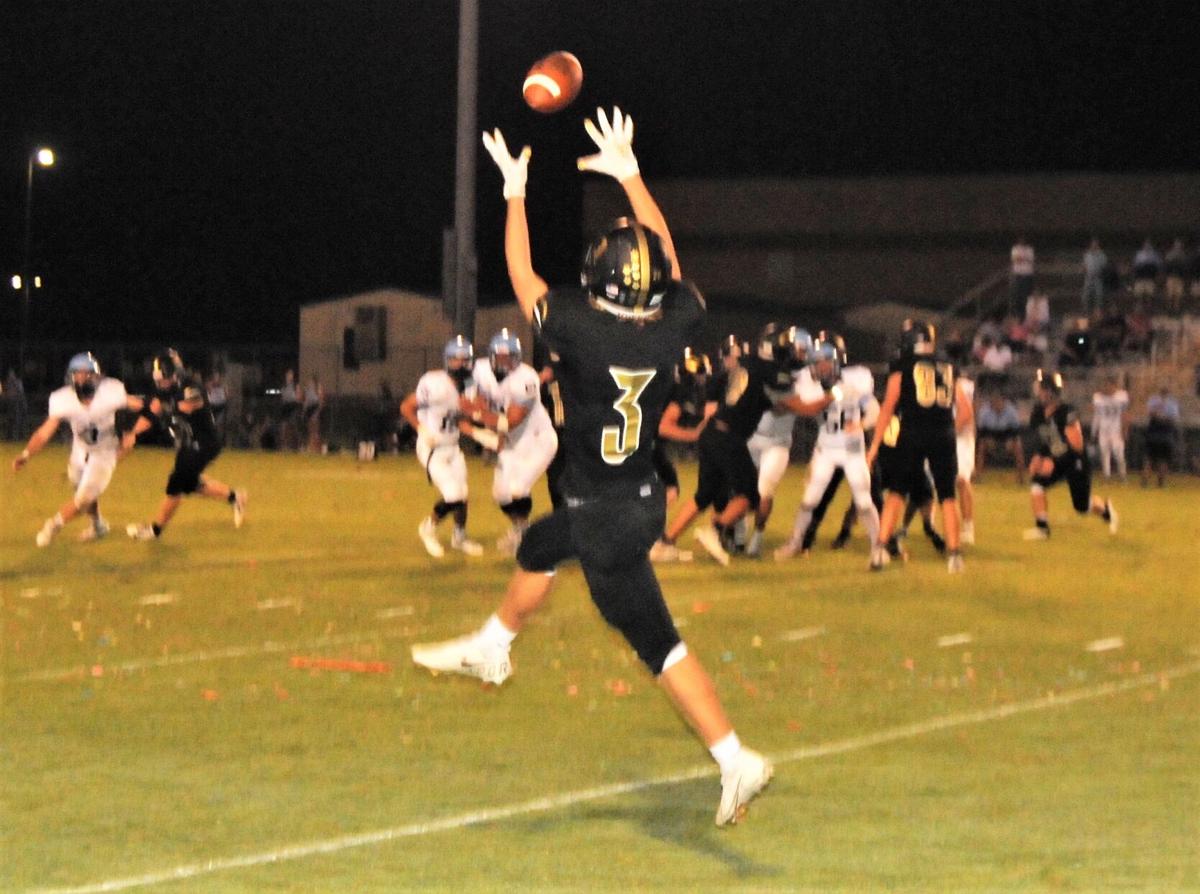 Croatan’s Easton Taylor goes up for a grab in the 34-7 loss to East Duplin. (J.J. Smith photo) 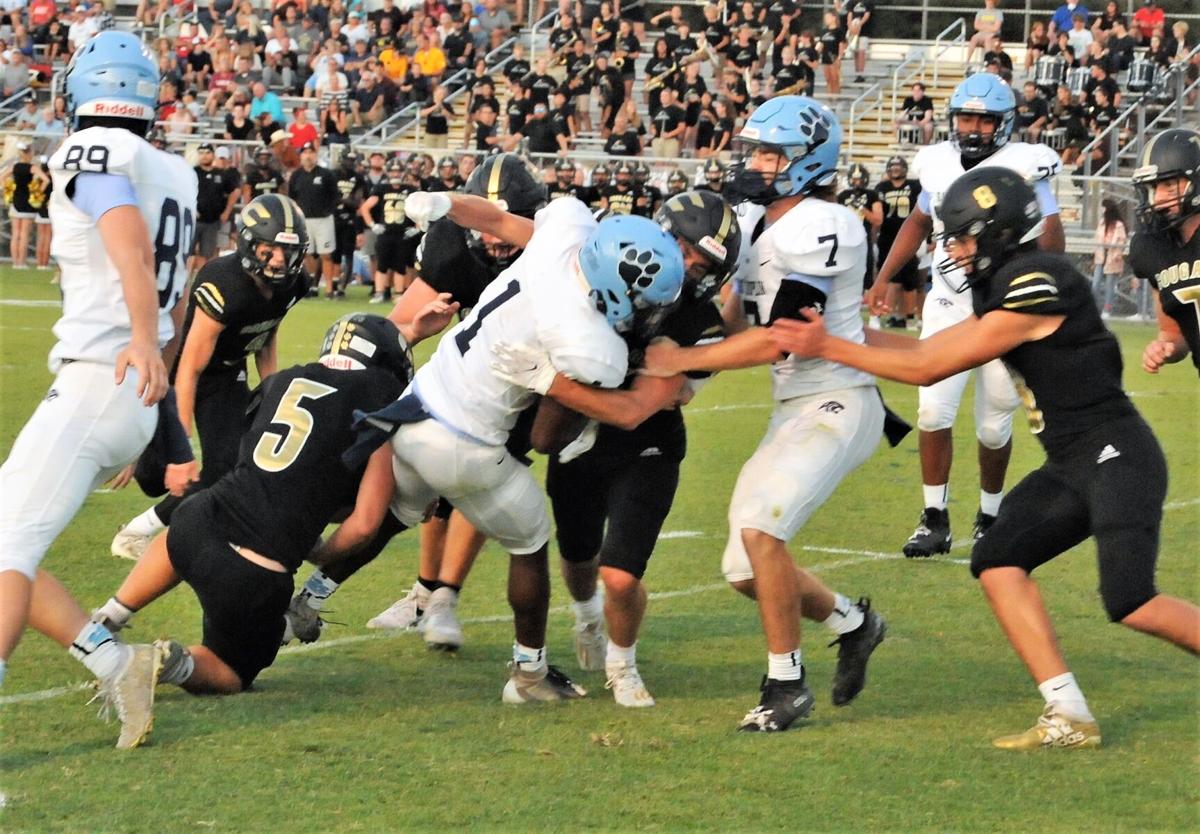 Croatan’s Evan King runs away from an East Duplin defender in the 34-7 loss to the Panthers. (J.J. Smith photo)

Croatan’s Easton Taylor goes up for a grab in the 34-7 loss to East Duplin. (J.J. Smith photo)

OCEAN — The Croatan football team had last week off after East Carteret had to enter coronavirus protocols.

The Cougars seemed under the impression they were off again this week in the first quarter against East Duplin.

The Panthers (3-1) racked up 21 points, 172 yards and six first downs on three possessions during the first eight minutes on their way to a 34-7 victory.

“I’m frustrated,” Croatan coach Andrew Gurley said. “I’m very frustrated. In the first half, I questioned our toughness. It goes back to the summer. We didn’t have our typical turnout this summer. They are stronger than us, because we averaged 16 varsity players at summer workouts. We didn’t get stronger. I told the guys to not get upset about it, because I begged and begged to get them out here this summer, but they didn’t want to be out here.”

Thankfully, for Gurley’s blood pressure, the Cougars woke up after the first quarter. They played nearly even ball with East Duplin thereafter, getting outscored 13-7 and outgained 177-110 while holding a 10-8 advantage in first downs.

And one of the Panthers’ touchdowns in the second half came after starting at the Croatan 11-yard line following a fumble.

“I did think we came out in the second half as a better team,” Gurley said. “I liked how we took control. It was a 7-7 ballgame after the first quarter before that last score. You just can’t spot a team that good 21 points.”

After producing just 20 yards of offense and punting on all six of their possessions in the first half, the Cougars punted the ball only once in the second half.

They fell just inches short of a first down on fourth-and-11 at the East Duplin 34-yard line on their second possession of the third quarter, ending at the 23-yard line to finish a 10-play, 51-yard drive.

On their next possession, they went 59 yards on 10 plays and finally got on the board with an Evan King 2-yard plunge. Nate Boal’s extra point kick made it a 28-7 contest. Brayden Stephens was the main man on the drive, carrying the ball five times for 34 yards.

Croatan forced the visitors to punt for the first time on the Panthers’ first possession of the second half. However, a fumble on the Cougars’ second play of the next drive set up East Duplin within 11 yards of paydirt. Two plays later, Avery Gaby scored from 1 yard out to give his team a 28-0 advantage.

Gaby, who came into the game with 372 yards and five touchdowns in his previous two games, went for 105 yards on 13 carries. He also caught a 17-yard touchdown pass from Nick Cavanaugh with just two seconds left in the first quarter to make it 21-0.

“We came out and played well to start with offensively and defensively, and then we just kind of hit a lull,” East Duplin coach Battle Holley said. “They did a good job of making adjustments.”

The Panthers started the game with a four-play, 45-yard drive that ended on a Cavanaugh 15-yard scoring pass to Jackson Gause. On their next drive, they went 72 yards on five plays with Drew Henderson scoring from 3 yards out at the 3:33 mark.

“We were lucky to get off to a fast start, because in the second half, it was a tight ballgame,” Holley said. “We probably relaxed too much after that fast start.”

The old league rivals played for the first time since meeting in the first round of the 2A playoffs in 2019. East Duplin won that contest 21-13.

The teams also met in the second round of the 2015 playoffs with the Panthers taking that game 34-7. The Cougars won their first league championship that season after ending conference play in a three-way tie with East Duplin and Northside-Jacksonville.

Croatan will stay in nonconference play this upcoming Friday with a trip to Wilson to take on Beddingfield (0-3).