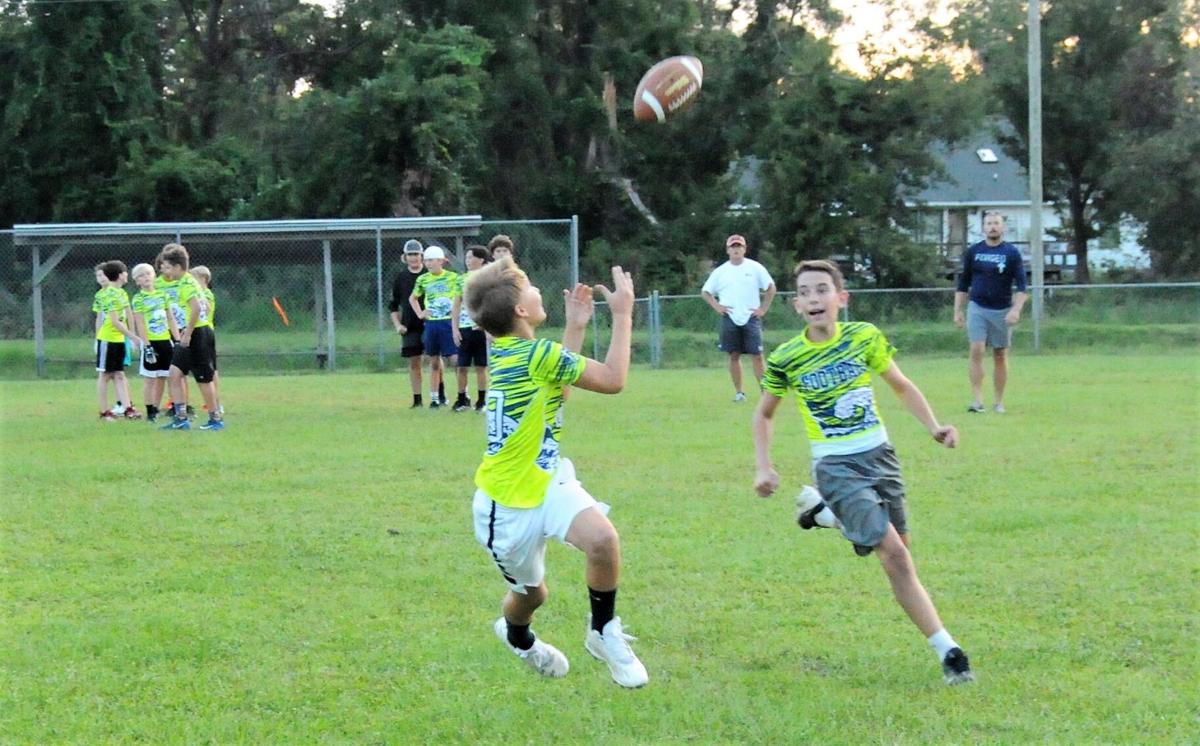 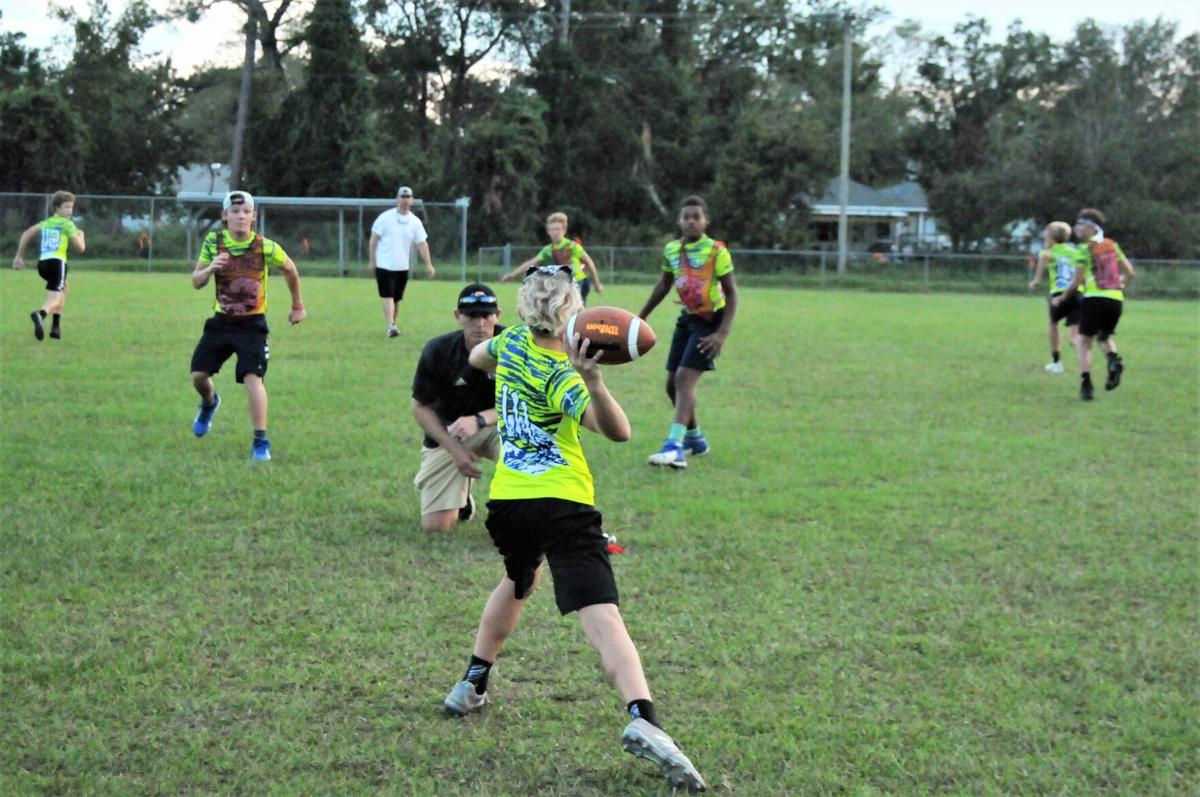 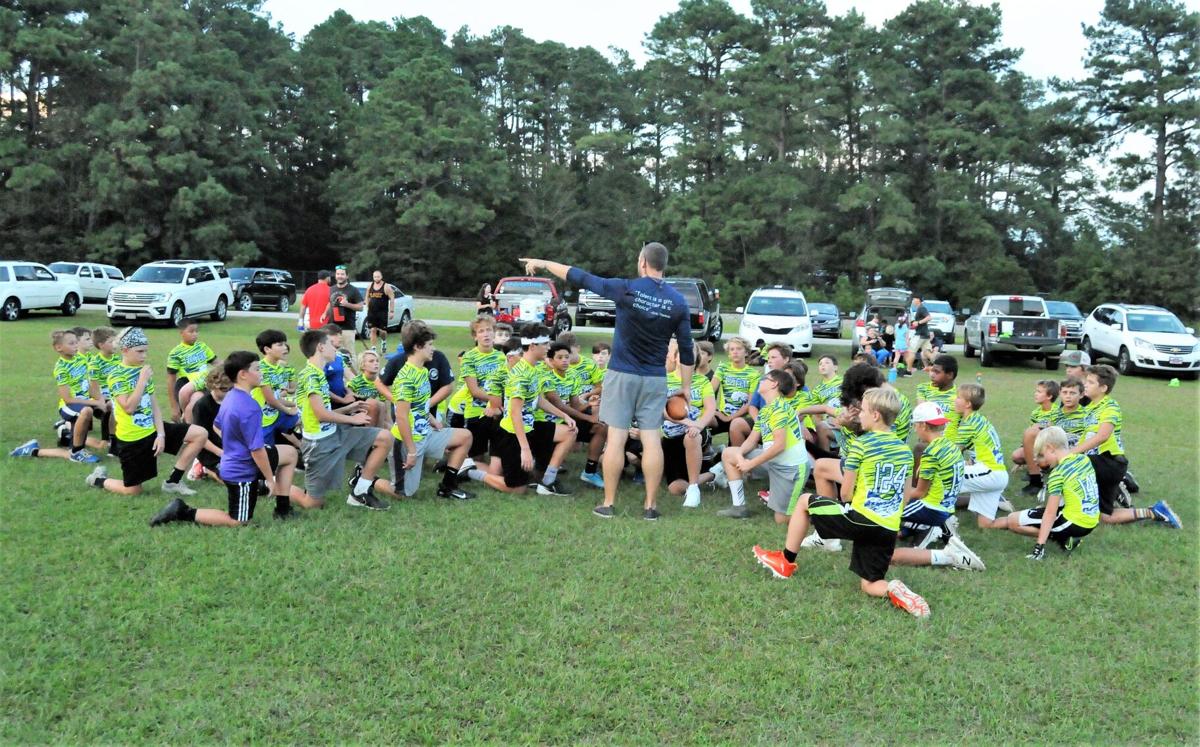 NEWPORT — The field beside the water tower in Newport has been buzzing with activity for a month.

The Crystal Coast Youth Passing League has featured 75-80 boys from the fifth to eighth grades getting their football fix on Tuesday and Thursday nights.

“I’ve been highly surprised but happy,” said league organizer Waylon Bell. “We did camps last year and had just about 20-30 kids, so we didn’t think we would have this many.”

Bell, the director of youth outreach at First United Methodist Church in Morehead City, decided to take the 7-on-7 league to a new level, along with fellow organizers Joey Greene and Rick Smith, when the coronavirus pandemic postponed school football seasons.

“The kids need something to do,” he said. “We’ve got soccer kids and kids that played other sports, and a lot of them didn’t know they liked football, and they’re starting to fall in love with it. That is what makes me happy.”

Other than parents signing a waiver, no coronavirus protocols have been instituted.

“We feel like its outdoors and so it’s pretty safe, so we don’t feel like we need to require masks,” Bell said. “

The sudden popularity of the passing league has Bell thinking bigger and better.

After speaking with representatives of Carteret County Parks and Recreation on Thursday, CCPR is interested in partnering and offering the field at Fort Benjamin Park.

“They seemed very excited,” Bell said. “We want to expand it to Freedom Park to get some Beaufort kids involved.”

The high school age group will play on Friday nights with a Sept. 18 start date, and like the other age groups, the schedule will go until the end of October.

“We’d like to do a senior night at the end,” Bell said. “There is a chance in February we don’t play (high school football), so I would love for these seniors’ parents to be able to walk to midfield with them.”

Bell said he also hopes to put on a “Halloween Bash” jamboree with leagues from other parts of the state.

Plans are to run the league June-August next year to lead into the school fall seasons.

The rules for 7-on-7 games are simple: Games are 20 minutes with seven players wearing shorts and T-shirts on each side of the ball. There is no tackling – the Newport league employs two-hand touch – and no linemen. Quarterbacks have a limited time to throw to receivers, while defenders match up with pass-catchers in coverage, putting athletes in one-on-one scenarios.

“A lot of counties and states have turned to 7-on-7 for younger ages,” Bell said. “It’s safer, parents like it, and you learn skillsets and proper form.”

The Tuesday and Thursday night competitions have brought back a sense of normalcy to the town.

“It’s nice to see Newport come alive around 6 p.m.,” Bell said. “It’s been good for families. They come and park, go walking in the neighborhood, go get a hot dog at Shortway (Brewing Co.), go to (Stable Grounds Coffee) to get a coffee or muffin while their kids are practicing. Some sit there and tailgate.”

There has been an additional spiritual aspect to the league for Bell who also serves as a Fellowship of Christian Athlete huddle leader.

“We emphasis four things ahead of football in this order: God, family, education, community,” he said. “They need to learn what it means to be a good teammate, a good person, to do community service, to be a good family member. Integrity is a big word for us.”