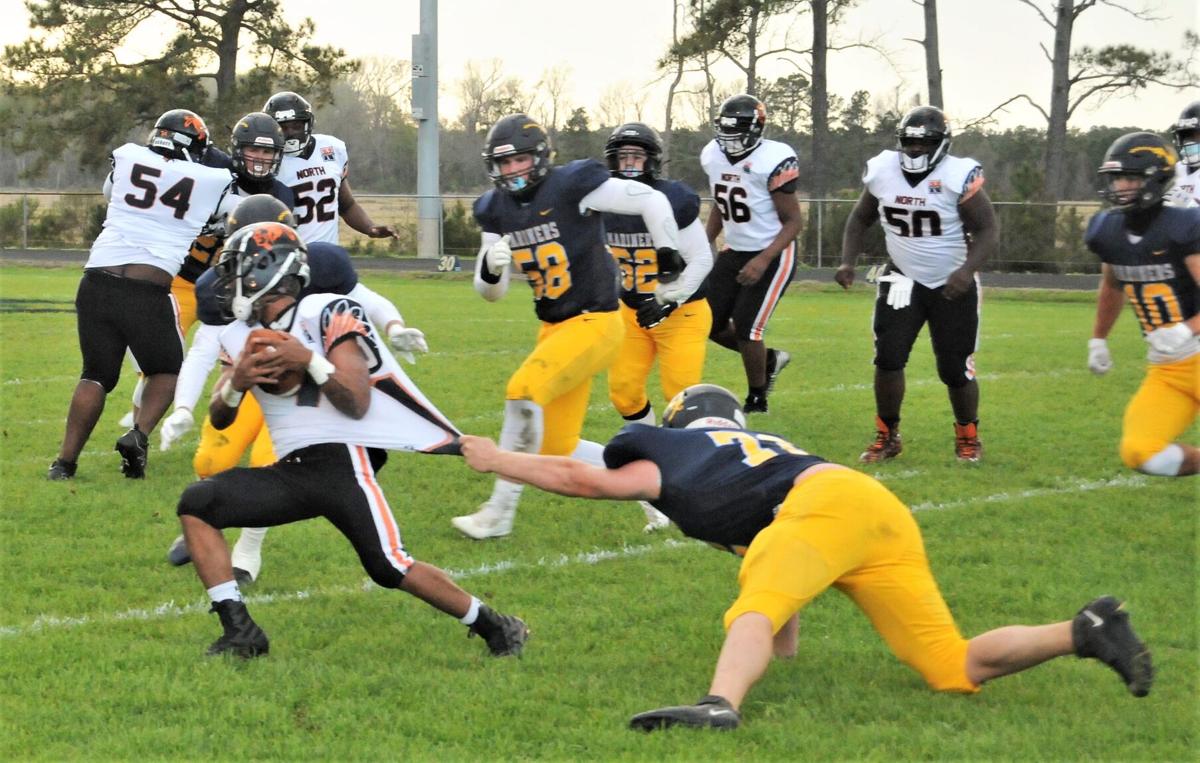 Daniel White slows up North Edgecombe’s Nijel Eatmon behind the line of scrimmage as his teammates rush in. (J.J. Smith photo) 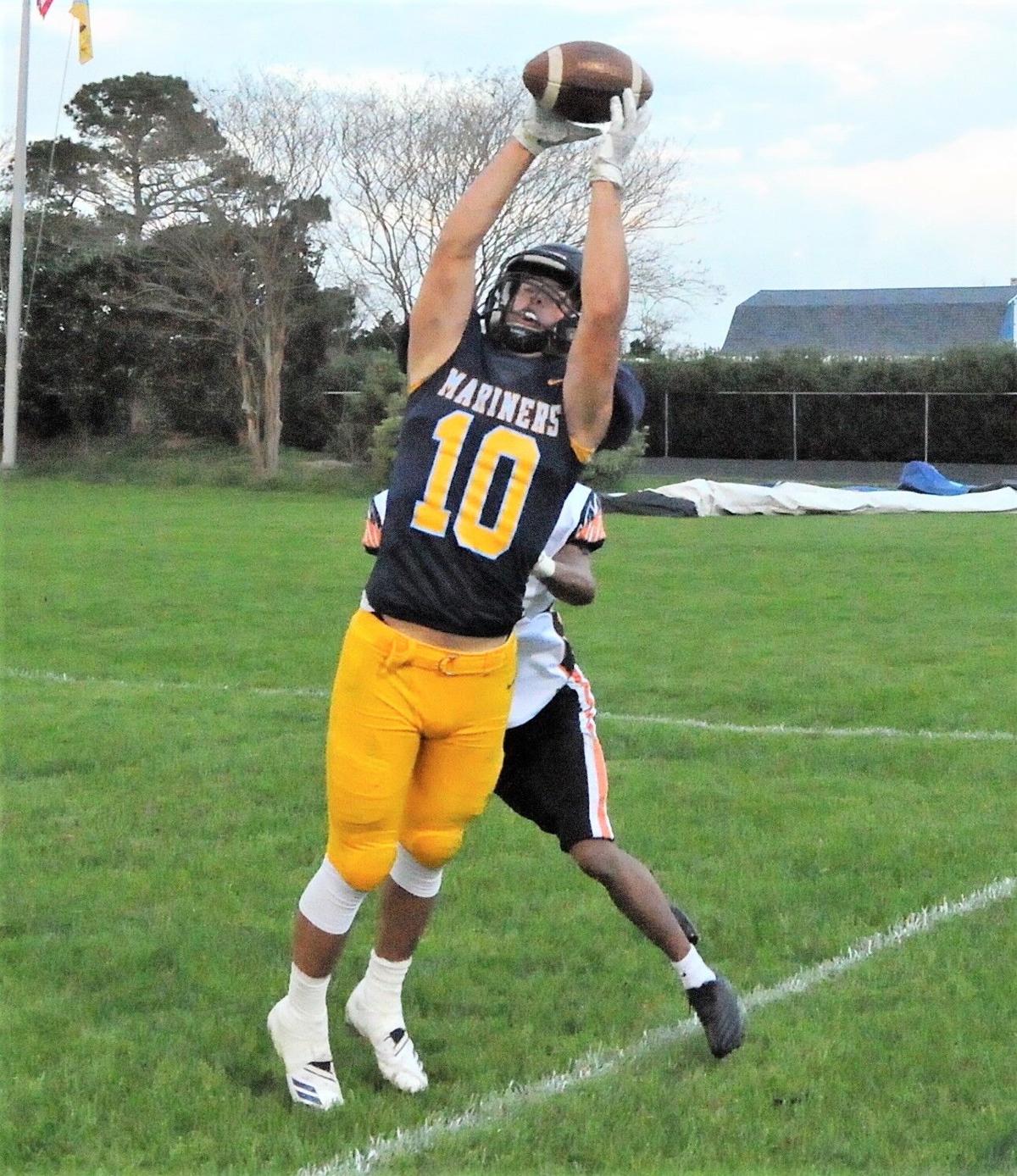 Jacob Nelson tiptoes the sideline to bring in a 28-yard touchdown catch in the second quarter. The East Carteret sophomore also had a 97-yard fumble return in the 35-14 win over North Edgecombe. (J.J. Smith photo) 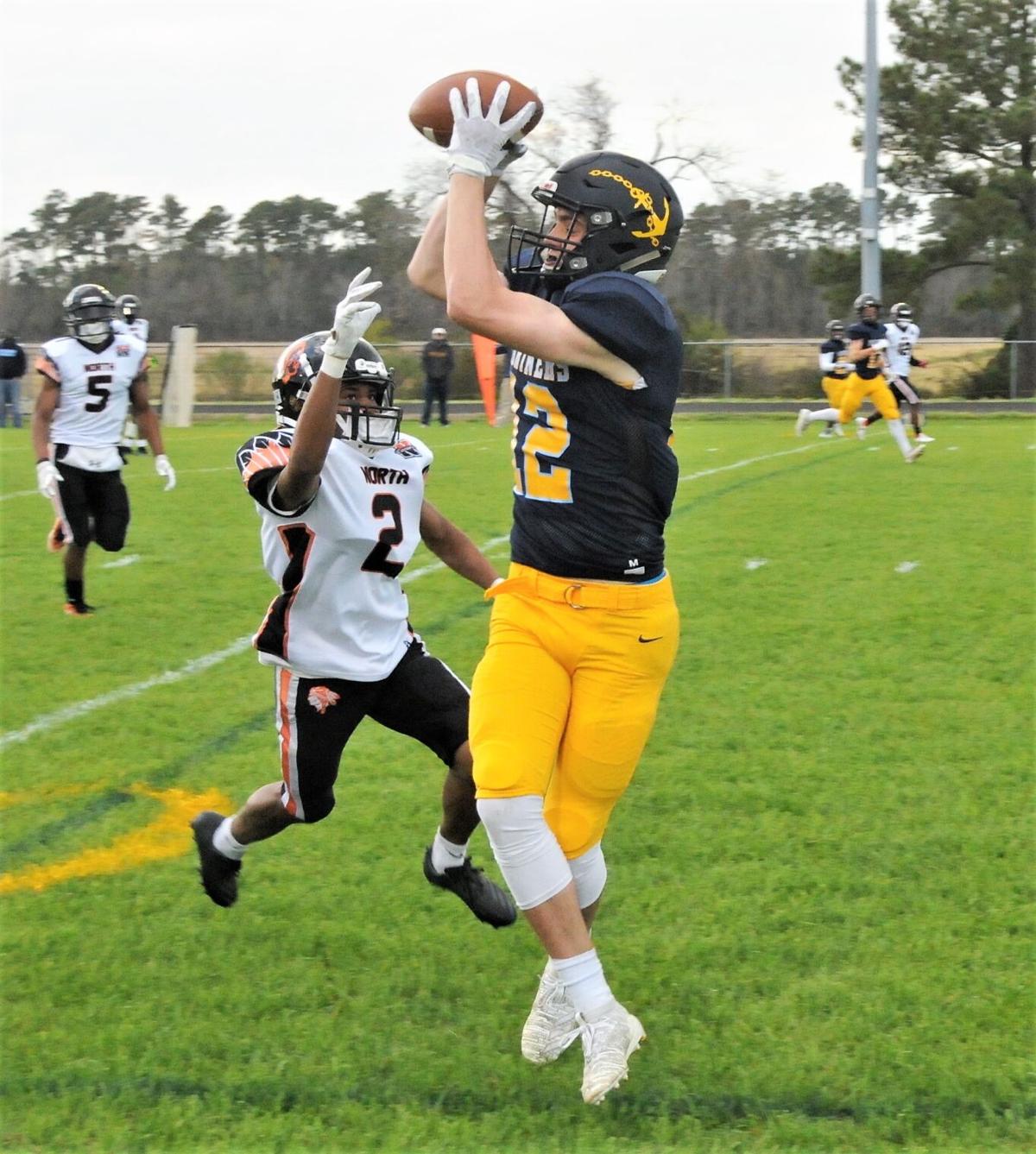 Bennie Brooks hauls in a 28-yard touchdown pass early in the second quarter in the 35-14 victory over North Edgecombe. (J.J. Smith photo) 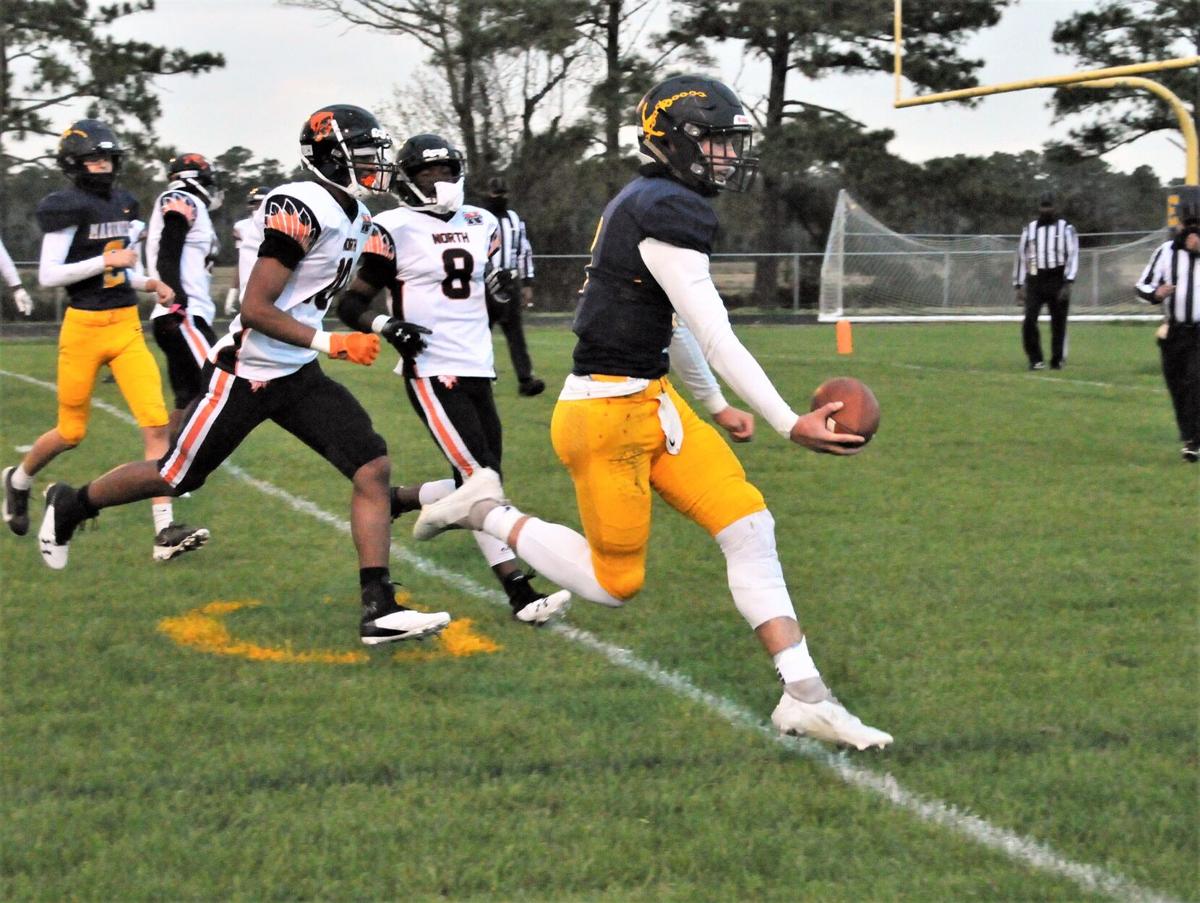 Daniel White slows up North Edgecombe’s Nijel Eatmon behind the line of scrimmage as his teammates rush in. (J.J. Smith photo)

Jacob Nelson tiptoes the sideline to bring in a 28-yard touchdown catch in the second quarter. The East Carteret sophomore also had a 97-yard fumble return in the 35-14 win over North Edgecombe. (J.J. Smith photo)

Bennie Brooks hauls in a 28-yard touchdown pass early in the second quarter in the 35-14 victory over North Edgecombe. (J.J. Smith photo)

Despite those lowly totals, the Mariners moved to 4-1 with a 35-14 victory on senior night.

“They did what anybody would do against a spread offense, they held the ball,” coach B.J. Frazier said. “They kept the ball from us.”

East benefitted from a 22-7 halftime lead and a defense that made timely plays in the fourth quarter.

Holding on to a tenuous 22-14 lead with less than five minutes to go, the defense was on its heels as North Edgecombe faced first-and-goal at the 8.

Nijel Eatmon rushed for 2 yards to make it second-and-goal at the 6. On the next play, he tried to find room on the outside, but Jacob Nelson ripped the ball away and sprinted 97 yards down the far sideline. Chris Herrera split the uprights on the PAT, and there was breathing room for the Mariners, leading 29-14 with 3:40 remaining.

“Give credit to the defensive line,” Frazier said. “Aiden (Hollingsworth) and those guys pushed it outside and funneled it to Jacob, and he created the play. I’m proud of our defense, how they stood up at the end. They came in with some athletes and size, and our guys answered the call.”

Nelson also registered the second-biggest play of the night. He tiptoed the right sideline in the end zone with 4:22 to go in the first half, and though the ball hit the grass when he fell, he was credited with a 28-yard stretching touchdown catch from Adam McIntosh.

“We got Jathan (Parker) running downhill, and we got Jacob some routes at receiver, “Frazier said. “We were able to diversify our offense.”

Parker capped the scoring with a 20-yard touchdown run with 1:24 left in the fourth quarter. He had 106 yards on just six carries with five of them going for at least 12 yards, and three going for more than 20. A 15-yard scamper midway through the second quarter resulted in a touchdown and a 14-0 lead after a McIntosh two-point run.

Nelson and Parker came up big on the Warriors’ first two drives of the game. Nelson recovered a fumble on the first possession, and Parker forced a fumble and recovered it on the second. North Edgecombe fumbled on four of its seven first half possessions.

The Warriors eventually found success around the halftime break.

Eatmon, who ran strong for 161 yards on 28 carries, scooted for a 57-yard score with just 40 seconds remaining in the second quarter to put his team on the board, trailing 22-7.

North Edgecombe looked revived on its first possession of the second half, marching 61 yards on 12 plays with Eatmon punching it in from 5 yards out to close the deficit to 22-14 at the 2:06 mark of the third quarter.

The visitors then surprised the Mariners with an onside kick and took possession and momentum with the recovery. Five plays later, the team faced fourth-and-3 at the East 33-yard line, but Cody Shepard and Parker brought the drive to a halt with a tackle of Eatmon for a 2-yard loss.

“I thought defense was the key,” Frazier said. “We struggled last week (in a 48-26 loss to Southwest Onslow), but we put more emphasis on it in the game plan this week. They still had some long runs, but I think we did pretty well.

Unfortunately for the Mariners, their next drive went three-and-out and the following one ended on the first play with a fumble. They also fumbled on their first drive of the night, and McIntosh was intercepted in the end zone on the final play of the first half.

“We had some turnovers, but we rebounded,” Frazier said. “That was a good win versus a tough, tough team. They run straight at you. We had some struggles, and we need to clean some things up, but a win is a win.”

McIntosh led the passing attack, going 8-of-16 with two touchdowns, including a 28-yard toss to Bennie Brooks early in the second quarter. McIntosh also had some big hits on defense in the second half.

The game was played Thursday in order to get all of the regular season contests in before the state-mandated end of season on April 9. The 1A/2A Coastal 8 Conference schedule has been turned on its head with Richlands (3-2) and Trask (0-4) each quarantining for two weeks earlier this season due to coronavirus exposure.

The Mariners are finishing the pandemic-shortened seven game schedule by playing six games in 22 days, with four, four, five, four and four days separating those six contests. They will next travel Monday to Trask.

“We’re embracing this challenge,” Frazier said. “It’s been fun. The kids like it. It’s less practice, more games, so this is perfect for them. We’re a little sore, but we’re in surprisingly good health.”