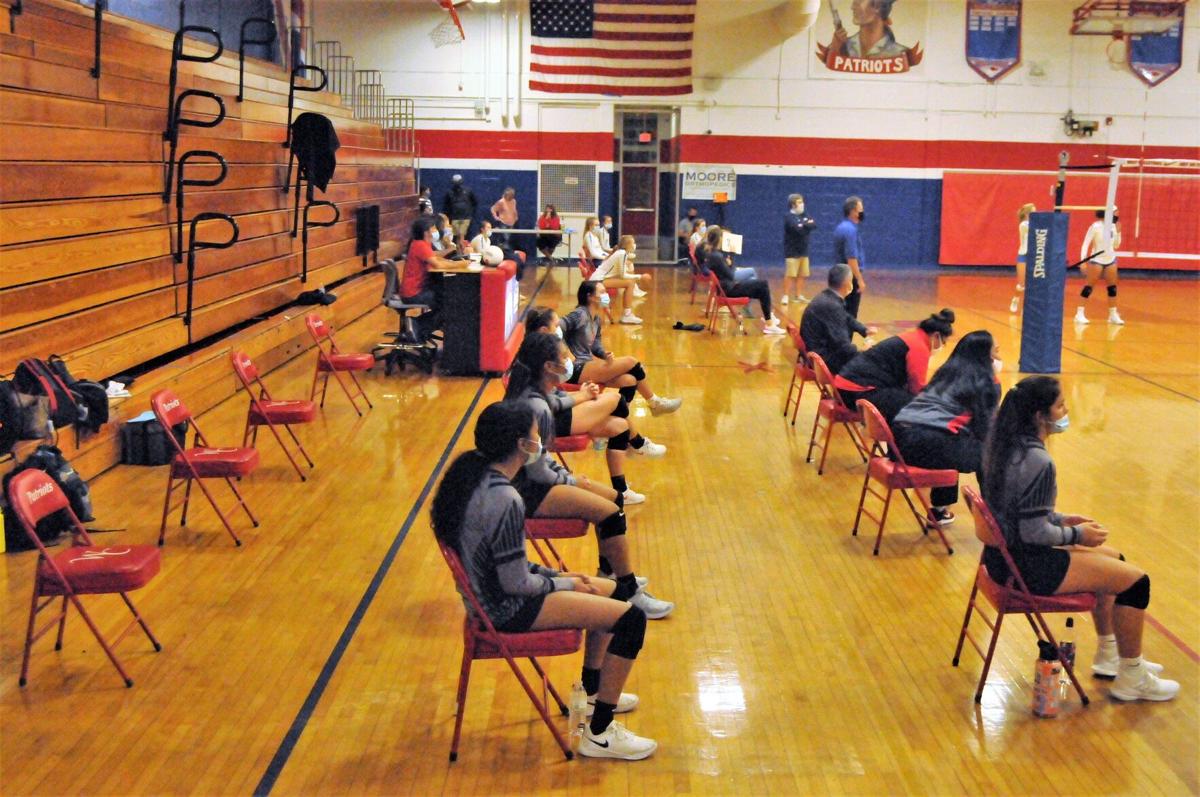 Players are separated in the bench areas this volleyball season due to coronavirus protocols. (J.J. Smith photo) 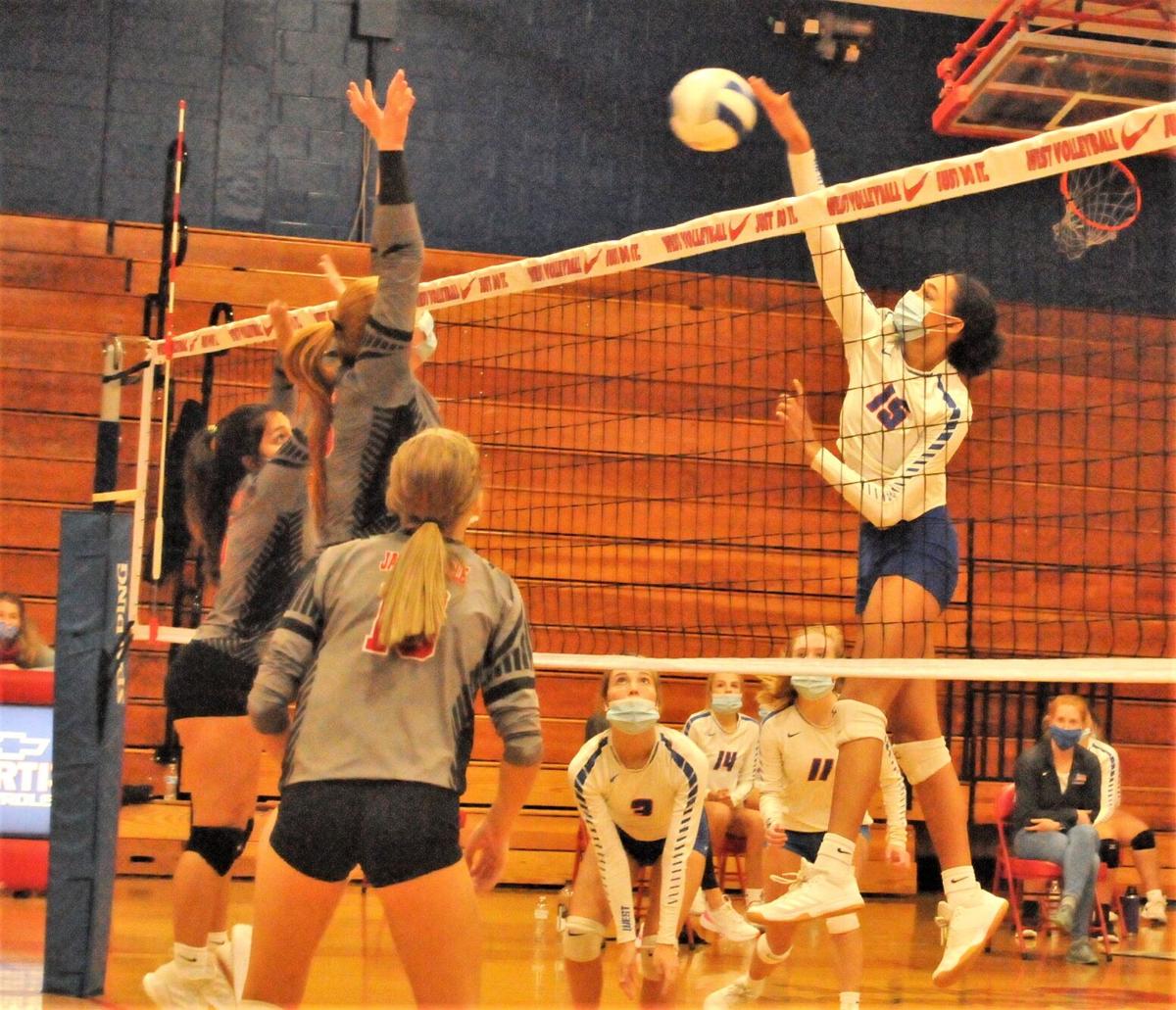 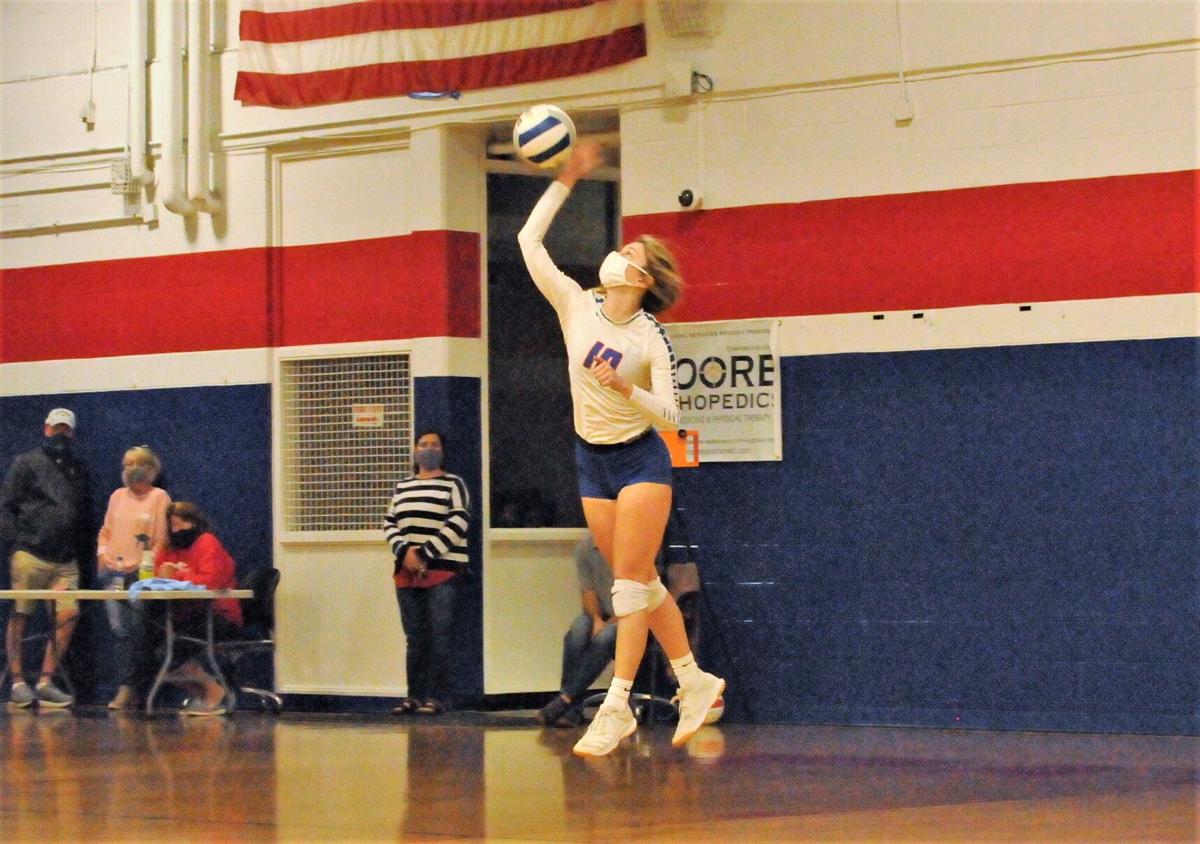 West Carteret’s Courtney Tyndall serves up one of the Patriots’ 16 aces in the four-set victory over Jacksonville. (J.J. Smith photo) 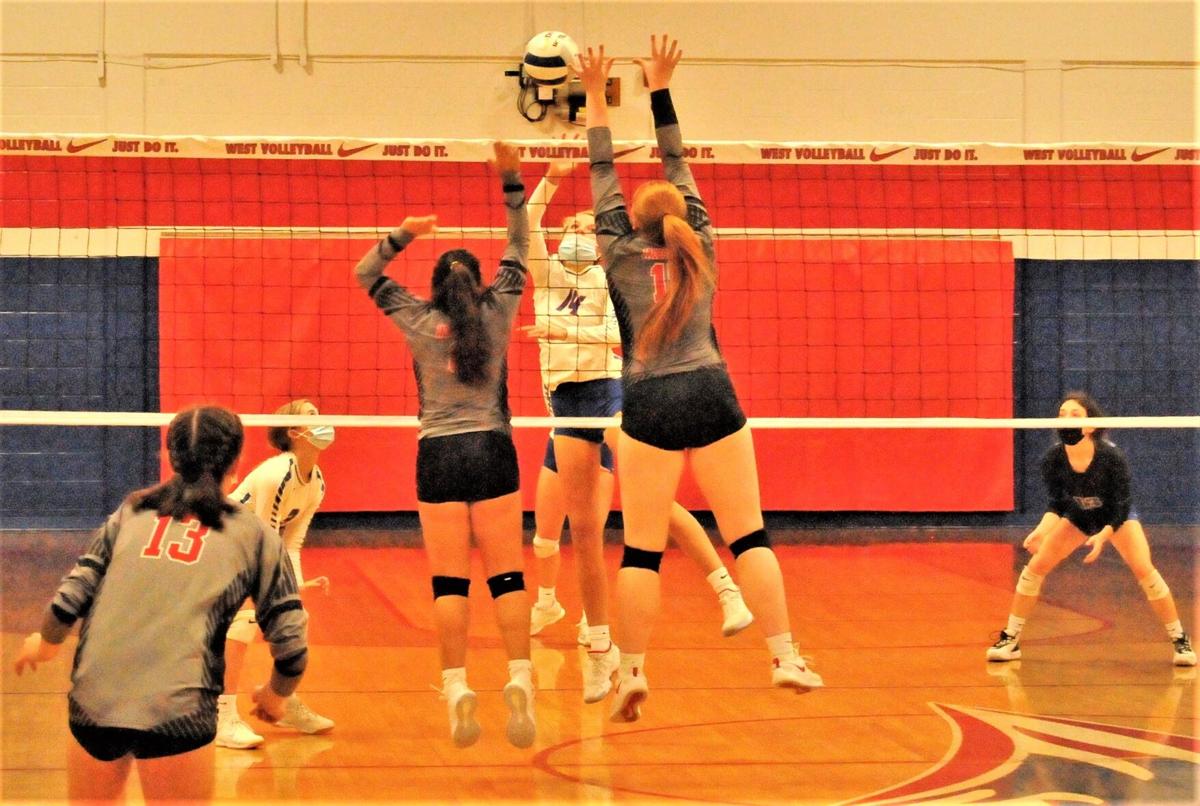 West Carteret’s Cayman Montgomery pushes a soft touch over the outstretched hands of Jacksonville blockers in the Patriots’ opening win of the season. (J.J. Smith photo)

Players are separated in the bench areas this volleyball season due to coronavirus protocols. (J.J. Smith photo)

West Carteret’s Courtney Tyndall serves up one of the Patriots’ 16 aces in the four-set victory over Jacksonville. (J.J. Smith photo)

West Carteret’s Cayman Montgomery pushes a soft touch over the outstretched hands of Jacksonville blockers in the Patriots’ opening win of the season. (J.J. Smith photo)

MOREHEAD CITY — West Carteret looked to be in trouble Tuesday night in its volleyball season opener, trailing 8-0 in the second set after dropping the first set.

The matchup has been the top rivalry in the league over the past few seasons with the teams splitting last year’s series and tying for the conference championship with identical 9-1 records.

The Cardinals snapped a four-year league championship streak for West in a 2018 season shortened by Hurricane Florence.

This season has been impacted by the coronavirus pandemic with the campaign starting two months later and shortened to a 14-match schedule. Players are required to wear masks on the court and are socially distanced in the bench areas. Volleyballs are switched out and sanitized periodically throughout the match.

“Today was the first day I’ve been nervous in a long time,” Turner said about playing a game for the first time in 386 days. “I was anxious about playing Jacksonville in the first match of the year, we’re at home, and I’ve got all these COVID responsibilities, making sure everybody is safe. And I’ve got new stuff to deal with like tickets and the camera (for live streaming), so I felt like I was pulled in a million different directions.”

Had fans been allowed – only parents are in attendance this season per protocols – they would have witnessed an impressive comeback.

Julia Quinn had two kills and an ace during the stretch, while Grayson Edwards and Courtney Tyndall posted two kills apiece.

Jacksonville took five of the next six points to jump ahead 20-18 before back-to-back kills from Quinn and Megan Kenon tied it up at 20-20. The teams battled back and forth over the next eight points until West held set-point at 25-24, and Cayman Montgomery gave her team a huge momentum shift with a touch shot over the net to knot it up at one set apiece.

“It was good,” Montgomery said. “It was really fun. I didn’t know if we would play this season. It means a lot, because it’s my senior season.”

Montgomery said wearing a mask during the game was “definitely different,” but she got used to it.

The Patriots dominated the third set with Tyndall serving her team to a healthy 6-0 lead with two aces. Two kills from Kenon and one from Quinn soon made it an 11-2 advantage.

West totaled six aces in the set – the squad had 16 in the match – with Maddie Mansfield, Emma Nicholson, Quinn and Kenon each tallying one on the way to the 14-point win.

“We scrambled maybe better than they did, and then I thought we served really, really well,” Turner said. “We hit so many zones and made Jacksonville get out of their system.”

Turner’s squad appeared well on its way to cruising to a fourth-set win with a 15-8 lead before the Cardinals’ Julianna Erickson almost single-handedly brought her team back and nearly tied the match at two sets each. She had five kills and three aces during a stretch to make it a 19-19 affair. Erickson had 15 kills, seven aces and two blocks in the match.

“She played really well all the way around,” Jacksonville coach George Folger said. “We just need to be able to pass better to get her the ball.”

The Patriots closed it out on a 6-1 run with Montgomery finding an empty spot on the other side of the net with an over-the-head backward touch shot.

“Another Jacksonville and West Carteret match,” Turner said. “Only it was four sets instead of five. I think we tried to make it five there at the end. But it was a pretty good night for the Patriots. We’ll take it.”

The teams will meet again on Dec. 3 in Jacksonville.

“We have to bounce back, get wins, beat everybody, so when we get back to West, we will have a chance (to win the league),” Folger said. “I told the kids it wasn’t make-or-break tonight. It helps to win the first one, but we learned a lot, and hopefully we will get better.”

West will hit the road for its next three matches, visiting Swansboro on Thursday, White Oak on Monday and Havelock on Tuesday.