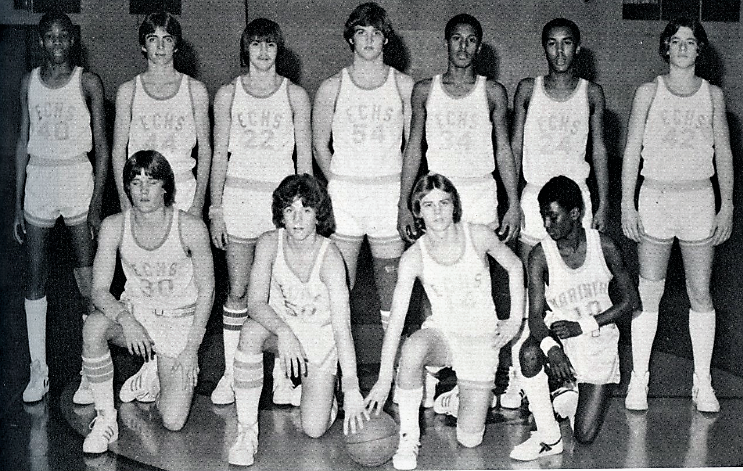 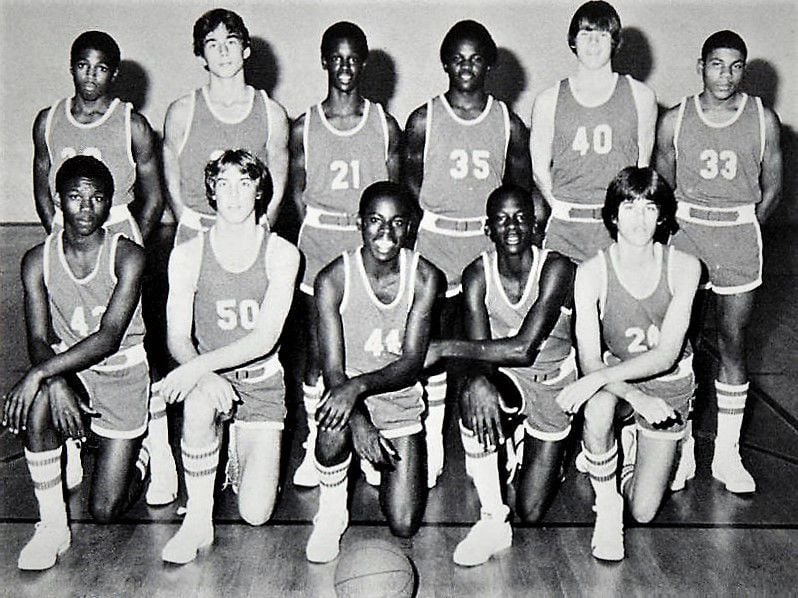 Michael Jordan, second from right on bottom row, played on the Laney junior varsity as a sophomore after he was cut from the varsity. (Spinnaker yearbook photo) 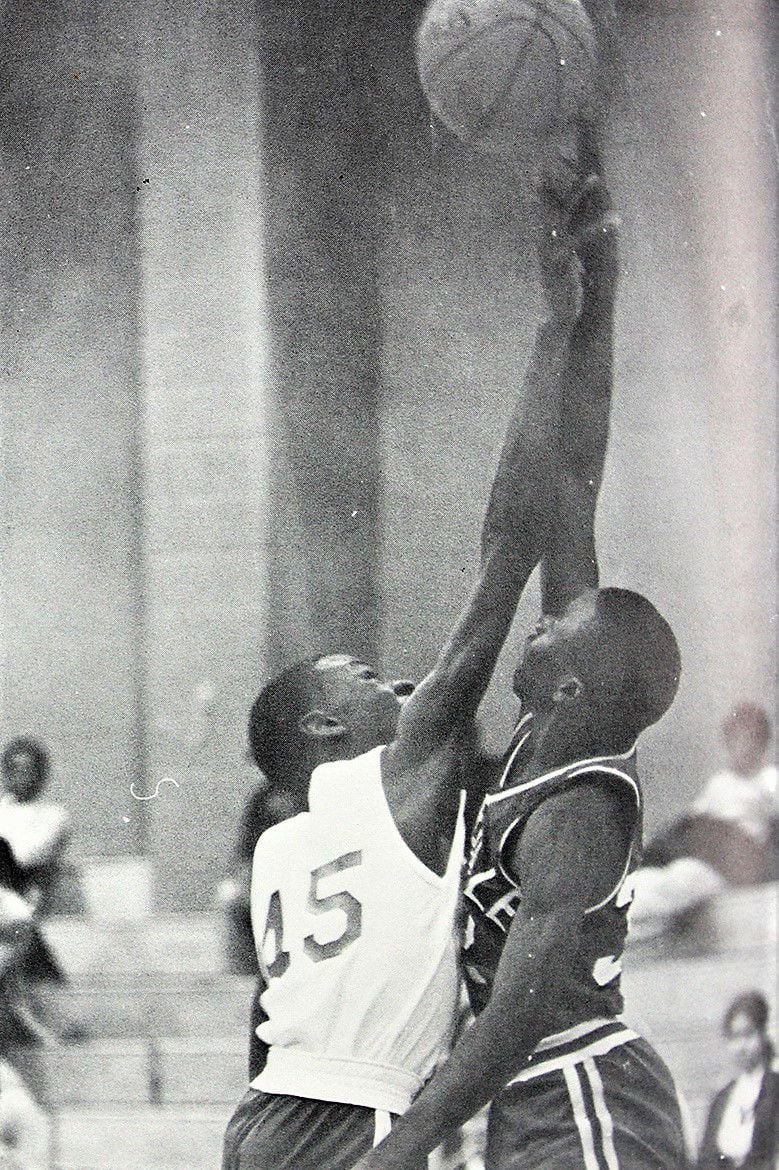 Michael Jordan, left, goes up for a jump ball as a sophomore on the Laney junior varsity team. (Spinnaker yearbook photo)

Michael Jordan, second from right on bottom row, played on the Laney junior varsity as a sophomore after he was cut from the varsity. (Spinnaker yearbook photo)

Michael Jordan, left, goes up for a jump ball as a sophomore on the Laney junior varsity team. (Spinnaker yearbook photo)

The Mariners had no idea what was in store for them.

On that Tuesday night in Beaufort, a skinny kid from Wilmington who would go on to become the GOAT (Greatest Of All Time) went off.

Michael Jordan, then a sophomore who went by Mike, scored 45 points in a 32-minute game to lead the Buccaneers to a 71-58 win.

“He shot it from everywhere,” said David Hill, who served as the junior varsity coach and varsity assistant coach at East from 1978-1986. “We had nobody that could stop him. Even our best players couldn’t do anything with him.”

According to basketball-reference.com, it was Jordan’s third game of the season after he was famously cut from the varsity. He seemed to take his frustration out on the Mariners.

“He was clearly not happy playing JV basketball,” said Tod Nelson, the East team captain on that squad. “I would have loved it if he had played later that night.”

Nelson said he didn’t remember a lot from the game – he recalled Jordan scored in the 40s. But one lasting memory stood out, a story he has shared often over the years with family and friends, a story he says gets better with age.

“My enduring memory is him on the wing going up for a jumper, and I flashed out to put a hand in his face,” he said. “And all I saw were his shoes. They were up to my waist. And coach screamed to get a hand in his face, and I said, ‘I can’t. You have seen me jump. It’s not going to happen.’”

Nelson said he thought of that moment as he watched “The Last Dance.”

The 10-part documentary has been a ratings smash for ESPN, averaging 5.6 million viewers across premiers of its first eight episodes, making it the network’s most-watched documentary series. It has averaged 57 percent more viewers than the next-closest documentary debut on ESPN (“You Don’t Know Bo” in 2012). The series has dominated the conversation on social media on Sunday nights during the past four weeks.

The documentary about Jordan and the Chicago Bulls’ journey to winning six NBA titles during the 1990s, including the last championship in 1998, premiered April 19 and wraps up tonight with its final two episodes.

Before his exploits with the Bulls, Jordan’s basketball journey began at Laney.

“Very early in that game that night, you could tell he was special,” Nelson said. “No one knew then, though, what he would become. There were no big stories of him in the newspaper. We were playing JV ball. When he went to (North) Carolina, you realized, oh, yeah, that is the guy that killed us that time.”

Nelson, who went on to play baseball and football at the U.S. Coast Guard Academy and later served as the West Carteret head football coach, recalled in those days playing great high school athletes in eastern North Carolina was nothing unusual.

“That was an incredible time,” he said. “It seemed like in every sport, there was a guy who went on to the pros. And we were all 3A schools at that point, so everybody played everybody. There was a lot of big-time talent that came through our area.”

The Mariners went up against a who’s who of powerful 3A squads.

In basketball, they played Washington, which won back-to-back 3A state championships in 1978 and 1979 while rattling off an astounding 56 straight victories.

Dominique Wilkins and Alvis Rogers led the Pam Pack. Wilkins went on to star at Georgia before putting together a Naismith Memorial Basketball Hall of Fame career in the NBA, averaging 24.8 points and 6.7 rebounds while making nine All-Star Games in a 16-year stretch.

In baseball, East played a White Oak club that won the 1978 and 1979 state championships at the 3A level, going 64-3 over a three-year period.

Louie Meadows (Houston Astros), Chuckie Canady (Texas Rangers) and Jeff Horne (Pittsburgh Pirates) were each taken in the second round of the MLB Draft. Meadows and Canaday also starred at N.C. State.

In football, East played Pamlico, which featured defensive lineman Doug Smith, who went on to shine at Auburn before playing eight years in the NFL with the Houston Oilers.

Jordan went on to make a name for himself with the Tar Heels, hitting the game-winning shot in the 1982 NCAA Championship Game. He was named ACC Freshman of the Year and was selected by consensus to the NCAA All-American team in both his sophomore and junior seasons. He won both the Naismith and Wooden College Player of the Year awards in 1984. He averaged 17.7 points and 5.0 rebounds in three seasons before declaring for the NBA Draft.

There was a time when Curtis Struyk thought he might play for the Tar Heels. He was a standout basketball and football player at East. Two years after watching Jordan go off for 45 points, Struyk was sitting next to him on a bus at a UNC basketball summer camp.

Struyk said the two ended up on the same team at the camp, and once he saw what Jordan could do, Struyk decided he was going to be a football player.

“The coaches were watching us, and they’re all paying attention to him, and I was getting no love, and my feelings were hurt,” he said. “I thought I was an OK player, but he was getting all the attention, and I still didn’t know who he was. But after playing together, I thought to myself, ‘Dean Smith made the right decision.’ And I made the right decision to choose football instead of pursuing a basketball career.”

Struyk said he’s told that story over the years more times than he can count.

“Here recently, I’ve told it a lot because of the documentary,” he said. “The thing I remember most about that game back then is that it was the first time I saw anybody on a JV team dunk a basketball in a high school game.”

He said his decision to pursue a football career was cemented at a Duke basketball summer camp where he had some success, but not enough for coach Mike Krzyzewski.

“I actually beat David Henderson in the 1-on-1 championship,” he said. “But Coach K walked me down to the football office and said, ‘Son, you have a future, but it’s not in basketball. It’s in football.’”

He grew an inch and found the weight room, putting on 50 pounds of muscle. Struyk played football at Guilford College for one year before walking on at East Carolina in 1983. He earned a scholarship and started at defensive tackle in 1984 and offensive tackle in 1985 and 1986. He tried out for the N.Y. Giants but suffered an injury in training camp.

By that time, Jordan had already established himself as one of the best players in the NBA. He was named Rookie of the Year and an All-Star in his first season, and after missing most of his second season with a broken foot, he scored a league-record 63 points in a 1986 playoff game versus the eventual NBA champion Boston Celtics.

Marion Fallin said at that time he was wearing Air Jordan sneakers to support his former on-court adversary. Fallin said he also wrote Jordan a letter during his freshman year at UNC.

“I don’t remember exactly what I wrote,” he said. “I reminded him of that game he had in our gym. He sent me a Carolina T-shirt.”

“I tell guys about it all the time,” he said. “I’ve told a lot of people. I remember he was wearing No. 45. I think it was because that was his older brother’s number, Larry’s number. He was upset because the coach wouldn’t let him play varsity, so you could see it. He was going to shoot it. He wanted to play varsity so bad, I think he had an attitude like he was going to show them.”

Fallin, whose son C.J. earned the News-Times Player of the Year in 2006 at West Carteret, said one part of the game stands out. He flashed out to block a Jordan jumper and hit him on the shoulder.

“The ball went over my head, and next thing I know, I look back, and the ball is in the net,” he said. “There were no three-pointers back then, but that would have been a three-pointer. He ended up hitting the free throw, making it a three-point play anyway.”

At the end of the night, Fallin checked the scorebook to see how many points Jordan scored, and his eyes lit up when saw a row of 2s lined up beside the Laney sophomore’s name.

The rematch was also pretty memorable. In a Buccaneers’ 69-49 win on Dec. 15, 1978, Jordan scored 24 points despite playing mostly in the second half.

Fallin said he and the rest of teammates feel special just knowing they were on the floor with Jordan at one time.

Now owner of the Charlotte Hornets, Jordan was a five-time MVP and a league-record six-time Finals MVP in the NBA.

Proving to be more than an offensive player, he was named NBA Defensive Player of the Year in 1988 and was named to the All-Defensive First-Team on nine occasions. A member of the Naismith Memorial Basketball Hall of Fame, he was named the greatest North American athlete of the 20th century by ESPN.