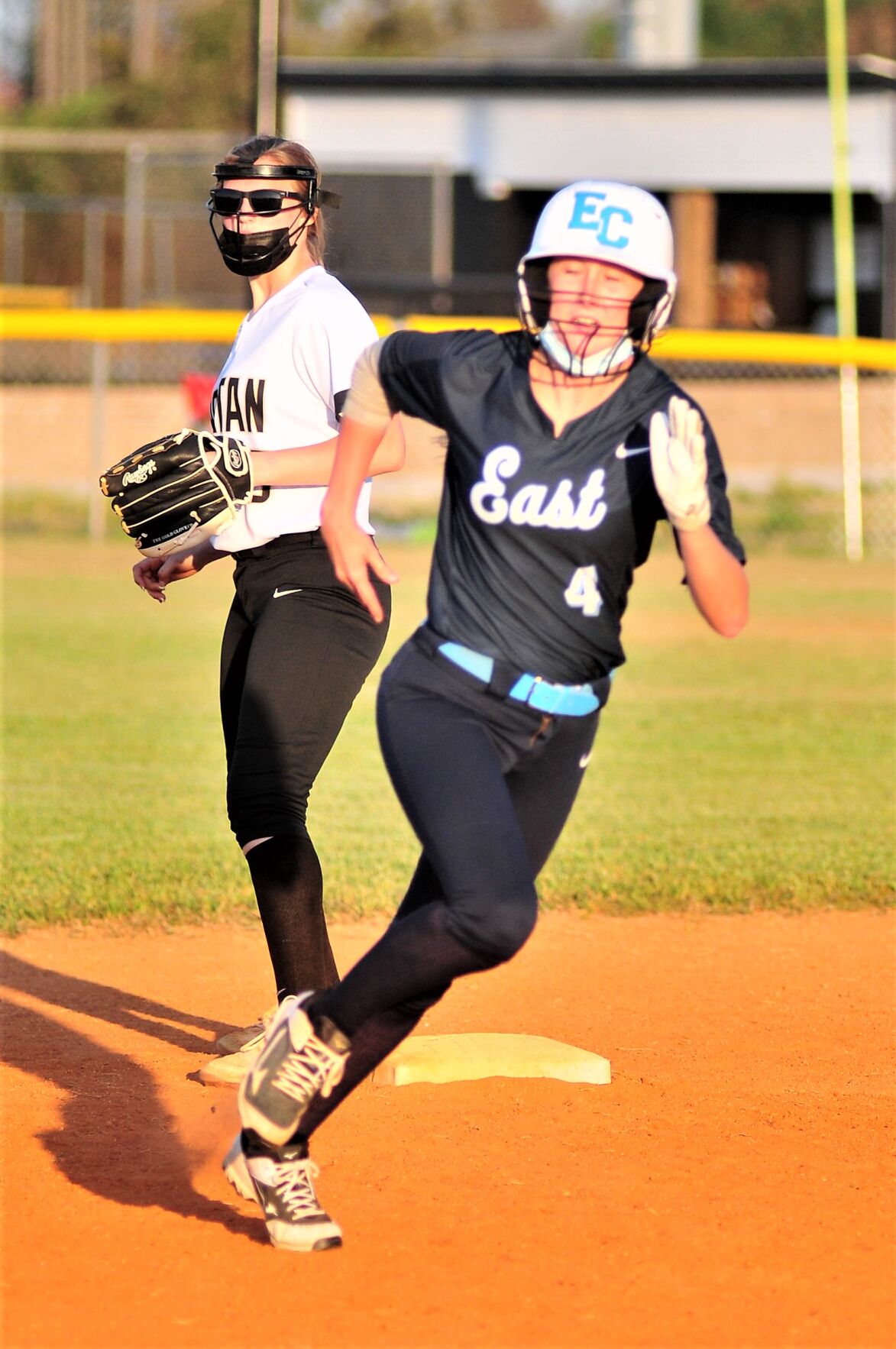 East Carteret’s Christa Golden bolts to third base Monday in the 11-1 win over Croatan. She hit 2-for-3 and scored three runs. (Zack Nally photo) 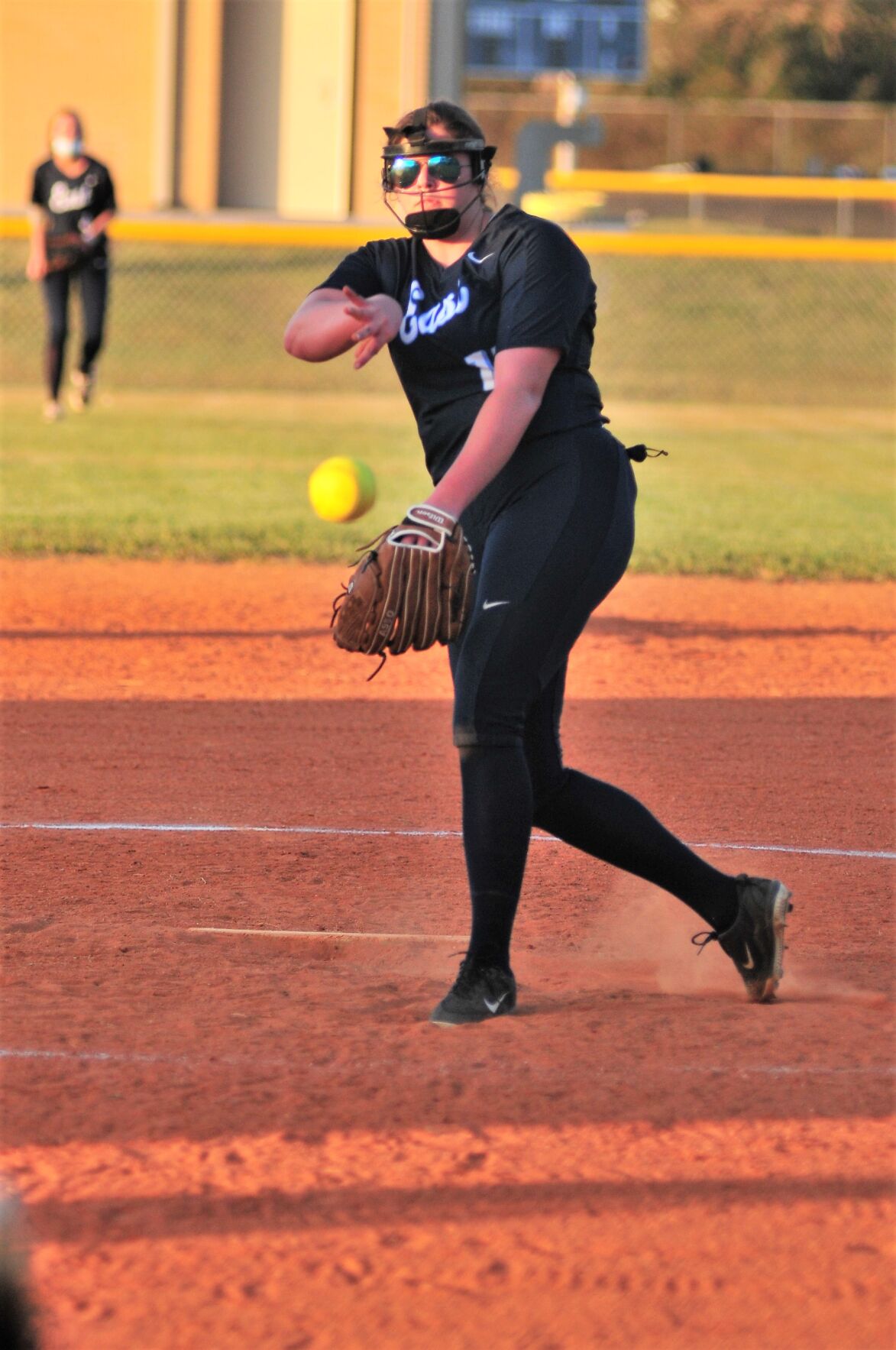 The Mariners’ Anna Gillikin strikes out 10 with one hit allowed on the mound and hit 2-for-3 with two runs and a two-RBI double. (Zack Nally photo)

East Carteret’s Christa Golden bolts to third base Monday in the 11-1 win over Croatan. She hit 2-for-3 and scored three runs. (Zack Nally photo)

The Mariners’ Anna Gillikin strikes out 10 with one hit allowed on the mound and hit 2-for-3 with two runs and a two-RBI double. (Zack Nally photo)

OCEAN — Lights-out pitching from Anna Gillikin and a cerebral night at the plate lifted East Carteret over Croatan on the road Monday.

Gillikin pitched five innings in the 11-1 mercy-rule win for the Mariners, who improved to 6-1 overall and in the 1A/2A Coastal 8 Conference. The offense also got four hits from Ashlyn Guthrie and two apiece from Christa Golden, Stella Bradford and Gillikin.

“I can’t say enough about Anna’s pitching,” East coach Doug Garner said. “She’s ‘Miss Dependable.’ She throws strikes and gets ahead in the count. You can’t ask for more than that. We got off to a good start. Our girls hit the ball early.”

The game only last five innings before East met the 10-run rule to end it early. The Mariners scored three runs in the first, second and fifth innings and two in the third.

For Garner, it was a positive sight to see during a holiday week that can often impact performance.

“You never know what to expect after a holiday,” he said. “You don’t know what team is going to show up. Today we showed up acting like we wanted to play, which is good because we have Pender coming up. We’re looking forward to getting back at them.”

East lost to Pender 5-2 in the season opener on March 15. It has since won six straight, still just a half-game shy of the Patriots (7-0) who are ranked No. 9 in the 3A classification by MaxPreps.com. With limited playoff spots, a win over Pender is the only path for East to a guaranteed playoff spot.

“I hope we keep it rolling,” Garner said. “I guess we’re at the midpoint of the season, and we’ve been hitting the ball well, so hopefully we keep it going.”

Ashlyn Guthrie was a monster at the plate for East, finishing 4-of-4 with a triple, two doubles, three RBIs and four runs. Stella Bradford hit a double and drove in three runs, Gillikin scored two runs and hit a two-run double, and Golden scored three runs.

Croatan only managed one hit in the game, struggling against Gillikin who struck out 10 and walked just one.

“We didn’t go out there ready to swing. It was very frustrating,” Croatan coach Lindsey Gurley said. “I know it’s spring break, but my mind wasn’t on that. I thought we would come in more focused.”

The one-sided loss for the Cougars followed a tight 3-2 defeat to Pender on the road March 31. Gurley was particularly disappointed after the game, noting that attitudes dictated the course of the game against East.

“We let our fears dictate what we do tonight,” she said. “It’s frustrating to see that fear and negativity when I know they are capable of more. I can’t help. It has to be them.”

Shelby Waltrip got the Cougars’ only hit in the game, a single in the third inning that helped move eventual scorer Annmarie Benson from second to third base. Benson walked to get on base.

Croatan will play at Lejeune (0-4) and East at Pender today (Wednesday).