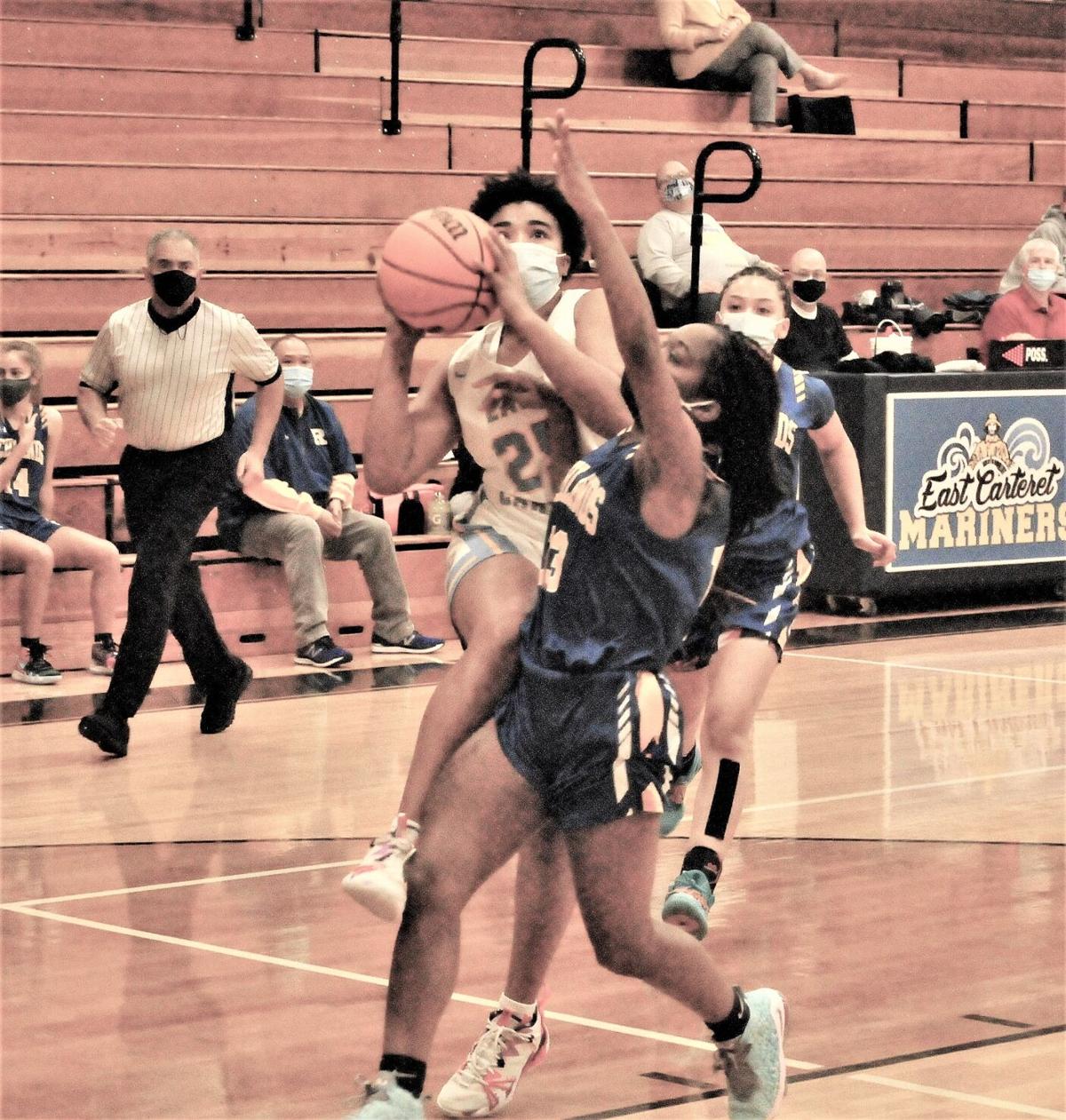 East Carteret freshman Tanzania Locklear hit the 20-point mark for the second straight game with 21 in a 49-41 victory over Richlands. (J.J. Smith photo) 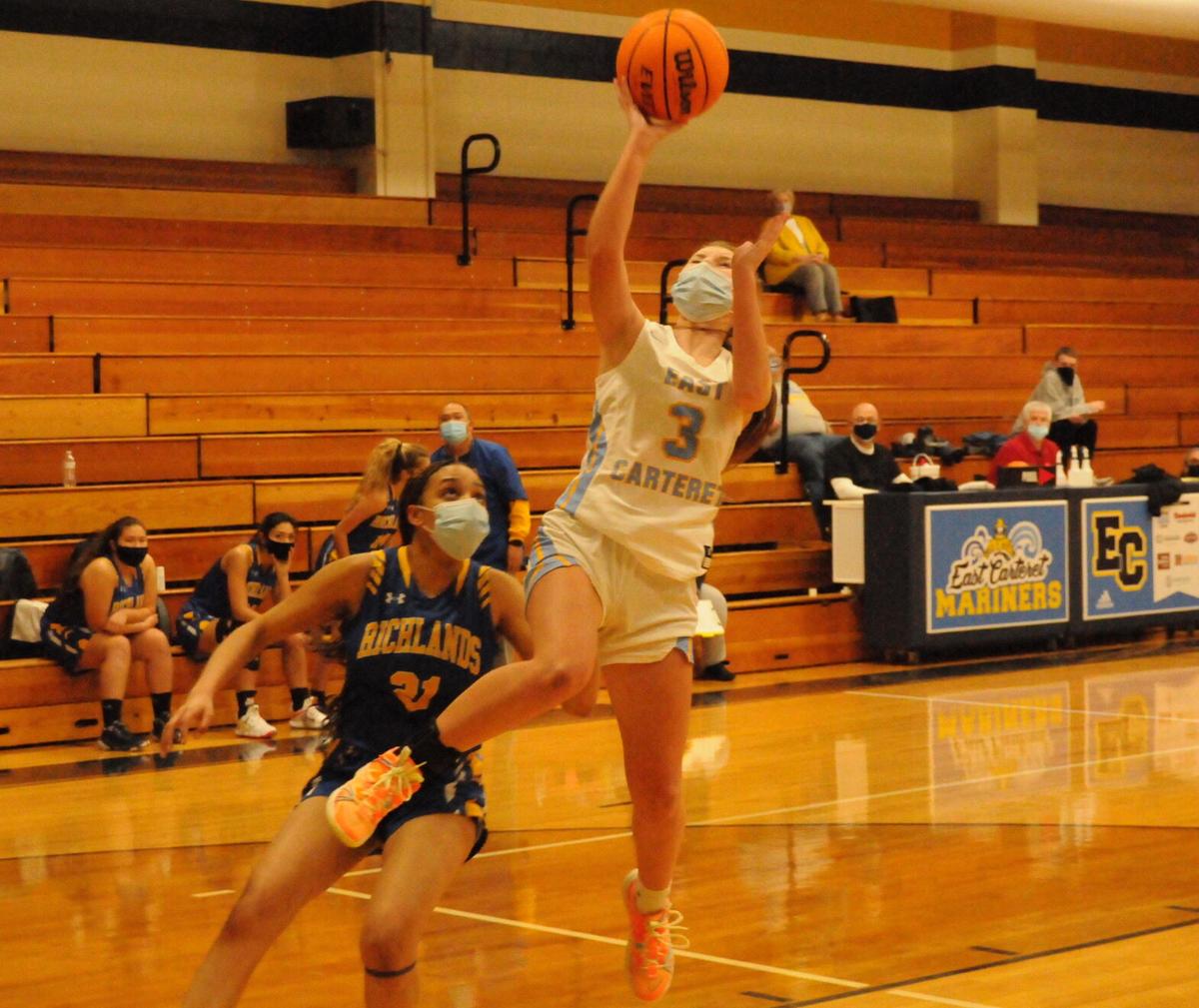 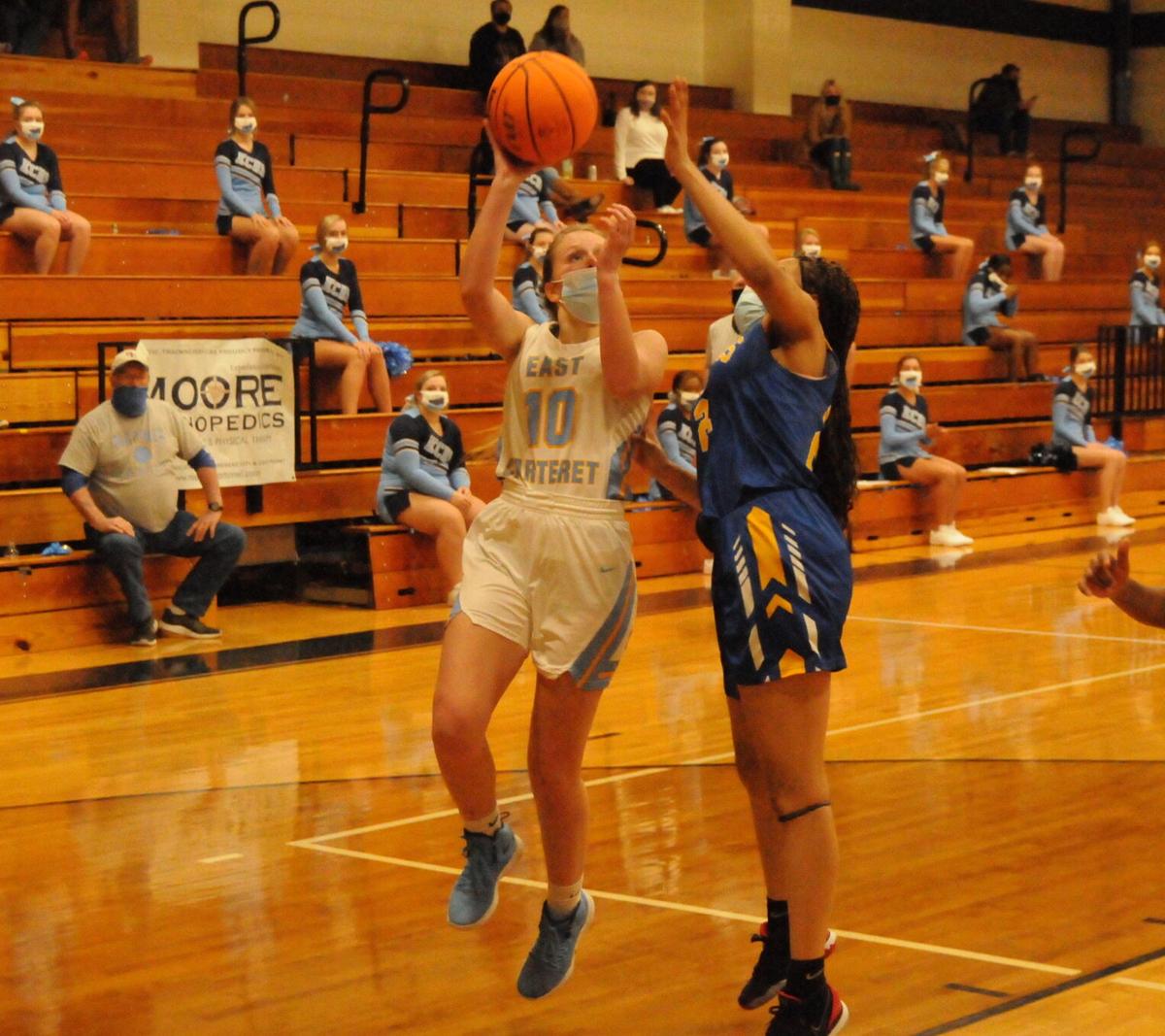 Kendalyn Dixon goes up for two of her 10 points Friday in East Carteret’s 49-41 victory over Richlands. (J.J. Smith photo) 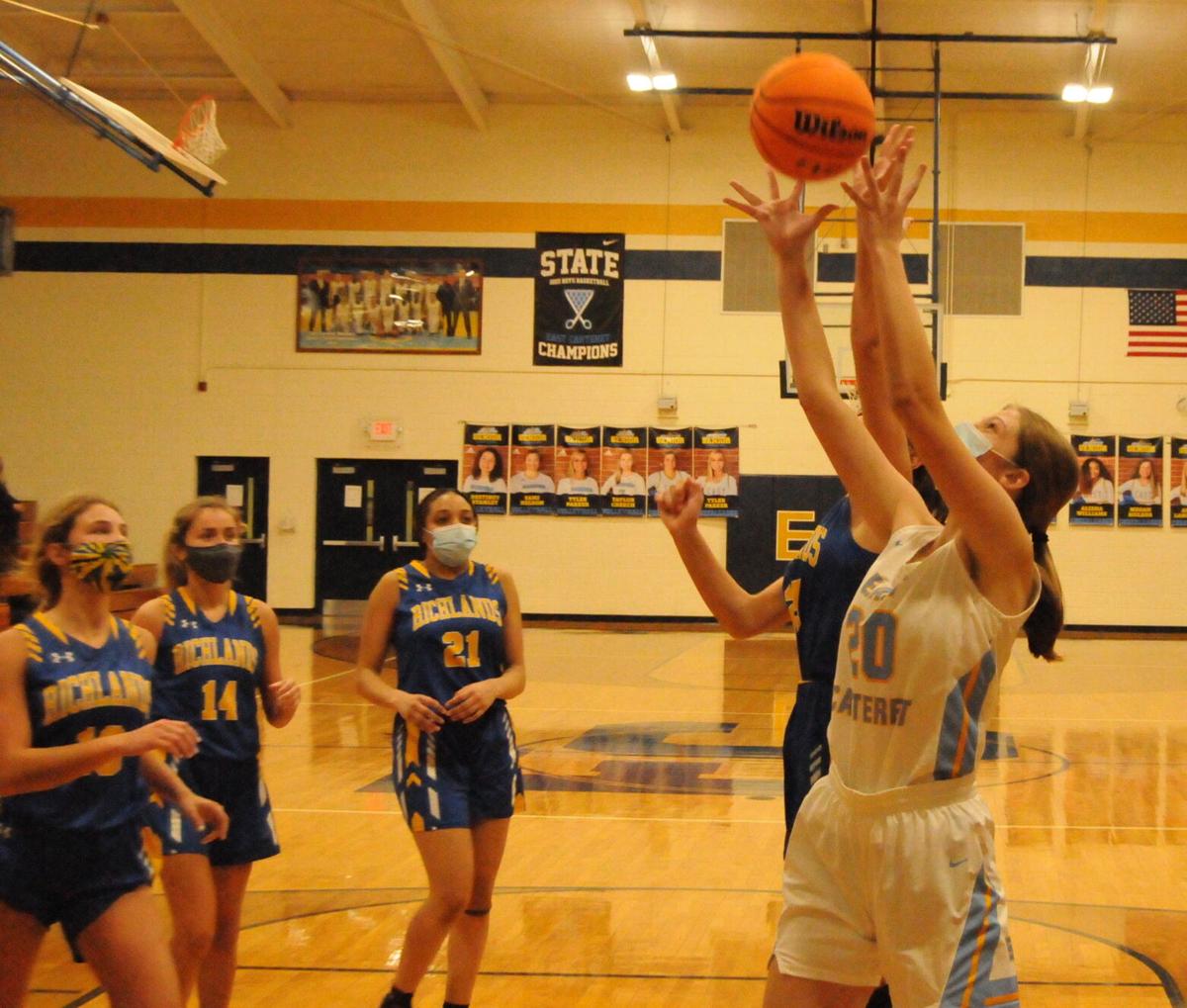 East Carteret’s Kate Guthrie stretches for a rebound in the 49-41 triumph over Richlands. (J.J. Smith photo) 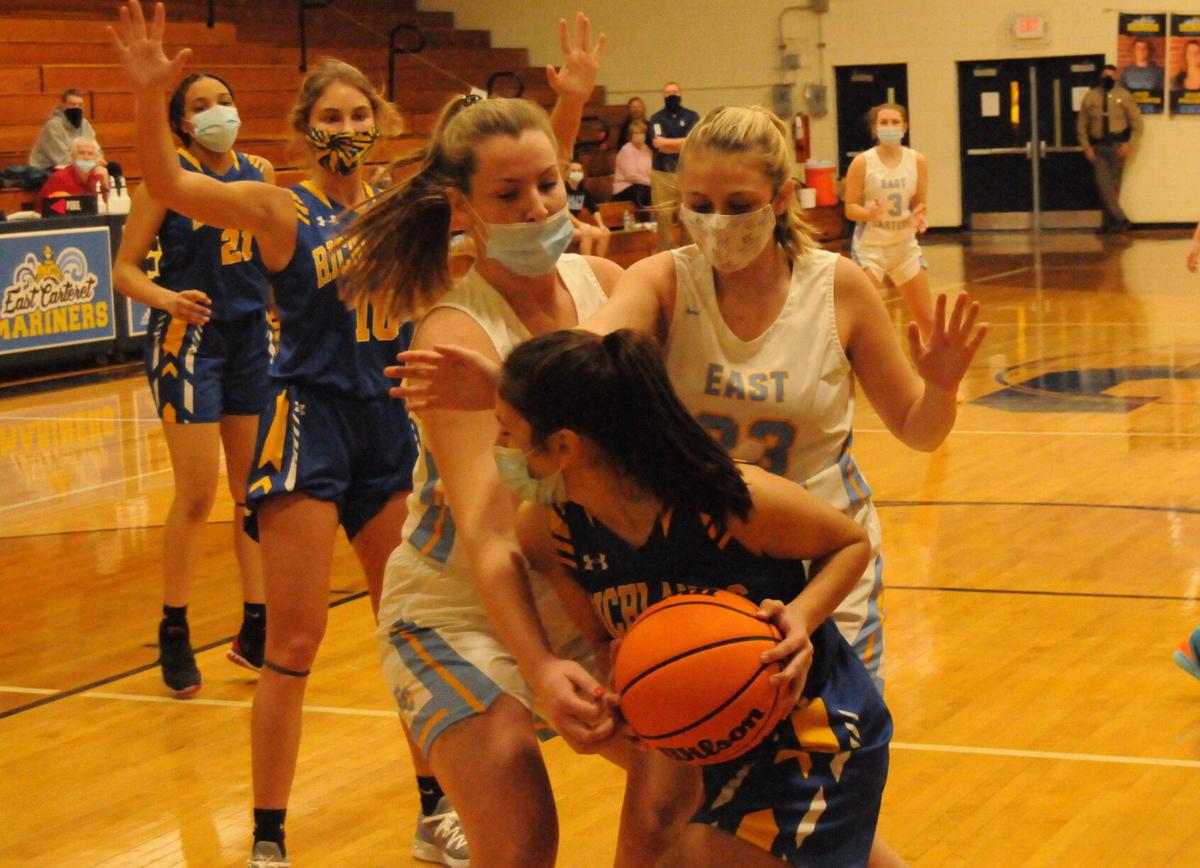 East Carteret freshman Tanzania Locklear hit the 20-point mark for the second straight game with 21 in a 49-41 victory over Richlands. (J.J. Smith photo)

Kendalyn Dixon goes up for two of her 10 points Friday in East Carteret’s 49-41 victory over Richlands. (J.J. Smith photo)

East Carteret’s Kate Guthrie stretches for a rebound in the 49-41 triumph over Richlands. (J.J. Smith photo)

No. 1: Their season opening win over Pender wasn’t a fluke.

No. 2: They’re still a work in progress.

Fresh off an impressive 62-25 victory on Wednesday, the East Carteret girls basketball team looked just as strong early against Richlands, jumping out to a 34-8 advantage with a little over five minutes left in the third quarter.

The Wildcats then outscored East 33-7 down the stretch before the Beaufort squad was able to hold on for a 49-41 triumph.

“My blood pressure is high,” East coach Keith Bernauer said. “That is a good win for us. That is a tough team. They beat us three times last year by 20 points or more. We earned every bit of that win.”

The second-year coach saw his team lead by as many as 26 in the third quarter, but that comfortable lead shrank to as few as seven late in the fourth.

“Our freshmen learned tonight what varsity basketball is all about,” Bernauer said. “It’s physical, it’s fast, it’s sloppy. They got to see it tonight.”

Freshman Tanzania Locklear hit the 20-point mark for the second straight game with 21 thanks largely to 12 first-quarter points, while fellow freshman Kenliana Dixon hit double digits for the second game in a row with 10.

The Mariners improved to 2-0 with the win.

It took them five games to reach that many victories last season when they went 4-15 overall and 3-11 in the 1A/2A Coastal 8 Conference to finish seventh. Richlands (1-1) went 15-12 overall and 11-3 in the league to place second.

“They are better than they were last year,” Wildcats coach Mike Kelly said. “They have some height, they have some really good outside shooters like (Locklear), and then they had some contributions from some other players.”

Richlands was down two starters, including Natalie Mills, who averaged 7.7 points and 8.3 rebounds as a sophomore.

East was at full strength, but this year that strength is limited with eight players on the roster, a seven-player rotation, and three freshmen on the floor at any given moment. And then throw in players wearing face masks due to the surging coronavirus pandemic.

“We got tired, and that is going to happen with seven playing a lot,” Bernauer said. “We just have to rotate better. That is on me. I have to figure out how to get them rest when we are up by 20. We got winded.”

The Mariners’ relentless 2-3 zone proved a blessing and a curse against the Wildcats, as several steals led to transition buckets, and a 17-2 lead heading into the second quarter on the way to a 29-6 lead at the break. The energy exerted to get that 23-point lead proved costly in the second half.

The Dixon sisters, including junior Kendalyn, were again spirited on the perimeter – they accounted for an eye-popping 16 steals in the previous game against Pender with Kendalyn swiping nine and Kenliana grabbing seven.

“We couldn’t get a basket in the first half,” Kelly said. “I think we rushed a little bit. East Carteret’s zone defense is very active, and they’ve got decent size and can cover a lot of territory. I don’t think we were used to that.”

Freshman Kate Guthrie, and Ellie Fulcher, the lone senior on the squad, each scored two points but made their impact on the boards and in the paint as their long arms disrupted drives to the basket. Camdyn Ensminger added four points off the bench.

The Mariners were sitting pretty at the 5:05 mark of the third quarter after a Kendalyn Dixon jumper from near the top of the key and then a three-pointer from the left elbow. Her team didn’t score again until she hit a free throw with 1:48 remaining in the frame. Like her sister, Kenliana, she finished the night with 10 points.

After putting up only six points in the first half, Richlands outscored East 15-11 in the third quarter. Aianna Hamilton scored 16 of her 18 points in the second half, while teammate Mallory Foy had 11 of her 13 in the final two quarters.

“I thought we settled down a little bit, started hitting some shots in the second half.” Kelly said. “The girls said I yelled at them at halftime, and that is why they played better.”

East players pulled at their masks time and again in the second half gasping for air as the frenetic pace and lack of depth caught up to the squad. The Wildcats took advantage by pushing out their defense, resulting in a number of steals in a 20-9 fourth quarter run to close the gap.

“The girls get down, because they don’t want to make mistakes,” Bernauer said. “They don’t want to watch that scoreboard. You just have to let them know you trust them, that they can trust each other.”

Kenliana Dixon went 2-of-4 from the foul line in the final 37 seconds to ice the game.

The Mariners were again aggressive, resulting in many trips to the free-throw stripe but weren’t as efficient as they were in the opener due to tired legs. They went 15-of-21 (71 percent) versus Pender but shot 12-of-22 (55 percent) against Richlands.

East will travel to Trask (1-1) on Tuesday for its first road game and then return home Friday to take on Dixon (0-2).