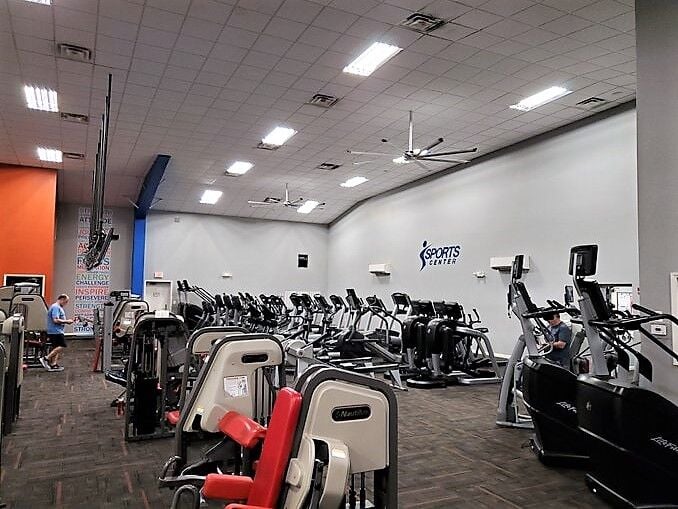 The main room of Sports Center in Morehead City sits empty, as attendance wains during uncertainty due to COVID-19. (Contributed photo) 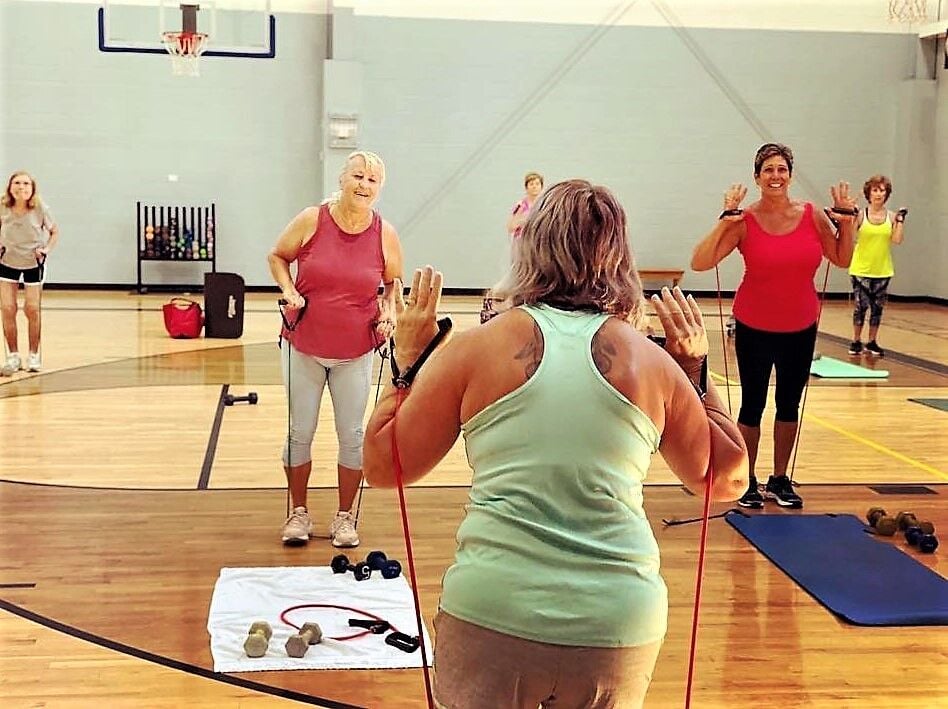 The main room of Sports Center in Morehead City sits empty, as attendance wains during uncertainty due to COVID-19. (Contributed photo)

MOREHEAD CITY — Gov. Roy Cooper announced the reopening of the state’s gyms and health clubs on Tuesday, but nothing will change for this county’s facilities.

Gyms and health clubs across the state banded together in May to reopen in the face of Cooper’s phase 2 restrictions. More joined them a few weeks ago when specific loopholes were discovered in the stipulations, such as physical therapy services and outdoor pools.

Cooper announced an adjusted phase 2.5 on Tuesday, allowing gyms, health clubs, dance studios, yoga studios and others to reopen with certain limitations. While it doesn’t affect how gyms will operate, owners are hoping it will encourage tentative members to return to the facility with full permission from the state and an updated perspective of safety standards.

“There’s definitely a hope that members will come back,” Anytime Fitness Co-Owner Jayme Limbaugh said. “We saw a huge dip in membership, but that’s to be expected. People are scared. We’re all trying to navigate what we’re seeing in the news and decipher what information is correct. We’re hopeful that as more facts come out from the CDC (Centers for Disease Control and Prevention), people will see that we’re doing everything we can to make things safe and that it is safe to be here.”

The GYM was the first in the county to reopen amid uncertainty of the duration of phase 2, but the recent announcement is still a positive one for owner Deanna McElmon.

“We’re excited,” she said. “We feel like now people know it’s OK to come in. I can reach out now to our 350-400 members that stopped because of COVID-19 and see how they feel following the governor’s announcement. We’re going to do the best job we can to keep people moving.”

The gyms and health clubs spent roughly 10 weeks behind closed doors with the phase 1 quarantine still in effect. That stoppage in operations, along with limited capacity in the three-plus months since, has severely hampered the businesses.

“We’re going to be roughly down about 15 percent on gross profitability,” Sports Center Director Paul Gillikin said. “That’s money we likely won’t recover. A health club is usually about a 10 percent business, so losing 15 percent has eked out pretty much all of our profitability for the year. We’re not dooming and glooming though. We just have to find a way to twist things to make it work. There are some big challenges ahead, but I think we’re uniquely positioned in the market to handle what comes.”

The losses have been more severe for others.

“We’re down about 45 percent,” McElmon said. “Attendance is down 60 percent. Does it hurt? Yeah. But it’s starting to go back and it’s starting to improve. It was actually higher into the end of July. Then when the governor added another five weeks to phase 2, it dropped off again.”

Summer is often a source of profit for Anytime Fitness’ flexible framework, which attracts travelers during the tourist season. Without that added revenue, the business has struggled mightily.

“Devastating is an understatement,” Limbaugh said. “When you open a business, you prepare for unforeseen circumstances – a dip in membership, a fire or a hurricane – but this is something that was not something we could prepare for. But we have good supportive members, and we’re really proud of the people who work out at our facility. We’re going to make it. We’ll be fine.”

Anytime Fitness was one of the few facilities to actually limit access to tourists, temporarily eliminating weekly passes and focusing instead on long-term members.

“That was a huge impact, but I don’t have any regrets in making that decision,” Limbaugh said. “It really wasn’t worth it. I love having the people year-round, they’re the ones who support us. You can’t track outside people or have lengthy discussions with them about that. Limiting our services like we did felt like the safest avenue.”

Sports Center and The GYM are the two biggest health club facilities in the county, featuring pools and basketball gyms, so overhead was a concern for both during the downtime. Anytime Fitness’ sister business, Crystal Coast Wellness & Performance Center, only opened last year.

“Talk about bad timing,” Limbaugh said. “But there’s never a perfect time to take a significant step in a business. We’re thankful that we’ve been able to use this time to kind of reset an regroup. Honestly, in spite of the financial devastation, we’re better than ever in terms of our services and how we program things. (the governor’s newest order) doesn’t change much, but it does allow us to go forward how we want to. We can breathe a sigh of relief and press forward.”

Attendance across the board has been way down, with Sports Center reporting its usage has cut in half, Anytime Fitness just over half and The GYM down 60 percent.

“We haven’t necessarily lost half of our membership, but people are using the facility less since COVID-19 began,” Gillikin said. “I think that’s a result of a fear of the virus and a trickle-down effect from the current school plan, which has placed a higher demand on parents and limits their open schedules. We’re optimistic going forward. I think the worst is behind us. Right now, we’re focusing on encouraging our members to utilize the facility.”

Both The GYM and Sports Center have implemented new programs directed at youth, looking to meet demands created by the hybrid public school structure, with students out of the classroom three days a week. That shift is temporary but significant in earning back some of the lost earnings from the summer.

“We’ll likely expand those programs dramatically over the last part of the year,” Gillikin said. “We’re trying to not to bite off more than we can chew right now, but there are needs that need to be met. People need an outlet right now.”

In general, more young people are at the health clubs as parents look for a safe outlet for antsy grade-schoolers.

“Now, with school having started, we’re seeing high school kids come in and they’re working out,” McElmon said. “That’s something we haven’t seen in the past. So, we’re putting together more programs for youth, such as PE programs and swim clubs. The homeschool demographic has now exploded, too, so we have groups contacting us and asking us to help facilitate a PE program. We’re looking at a lot of different things.”

The influx of young people comes at a time when the senior population still has largely not returned to the facilities. The high-risk members are still taking advantage of virtual options and open-air water aerobics, but there has been a noticeable different in clientele.

“I think over the next few years, it will be different for health clubs,” Gillikin said. “In five years, though, provided another life-altering event doesn’t occur, health clubs will see a normalizing of sorts. People are finding it difficult to replicate the same exercise regimen at home as they can at a health club. This won’t be a permanent change. We’ll have to adjust our business model for a while, but Americans are very resilient and I think it will turn.”

All of the health clubs and gyms in the county enjoyed little to no opposition from county officials over reopening in the face of the phase 2 ban. The loopholes found were legitimate, but businesses in other parts of the state have not been so fortunate.

“We could have been in a much different position financially, and I’m not sure it would have been survivable,” Gillikin said. “When you go that long with no revenue and you still have a significant outflow of expenses, the only way to make it would be to majorly increase dues and make major changes to services. But we weren’t put in that situation, and I feel like we did it the right way. The governor wants us to operate at 30 percent capacity, but this entire time, we’ve been operating at 25 percent.”

The struggling businesses have also received support from those that are flourishing and the community in general, support for which Limbaugh is very grateful.

“Some people are flourishing and some of us are having a rockier time, but the goal is to come together and support one another,” she said. “I’ve found that a lot of businesses that are flourishing because of the nature of the products they sell have been overly supportive of those of us in sticky situations. I’m really thankful of just how supportive the community has been.”