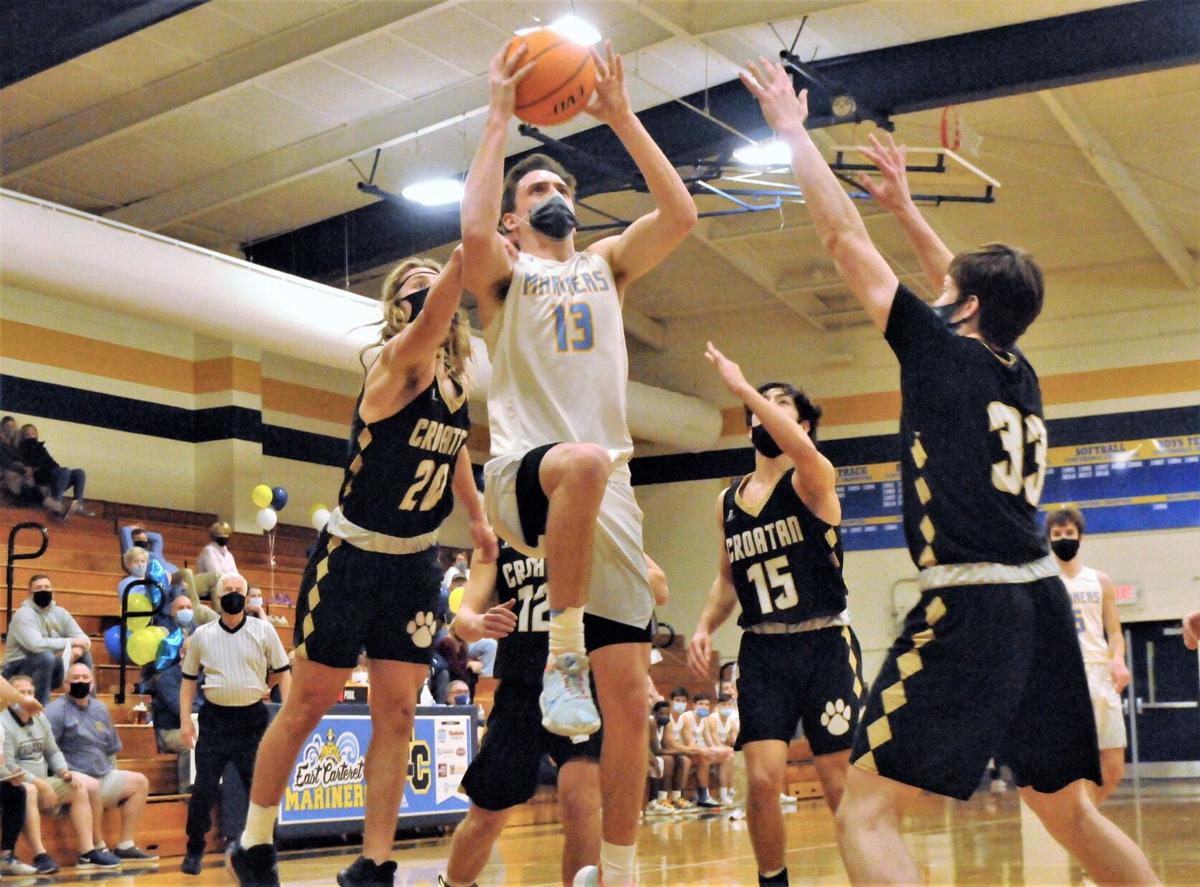 East Carteret’s Bennie Brooks goes up for two of his game-high 21 points in the 47-34 win over Croatan. (J.J. Smith photo) 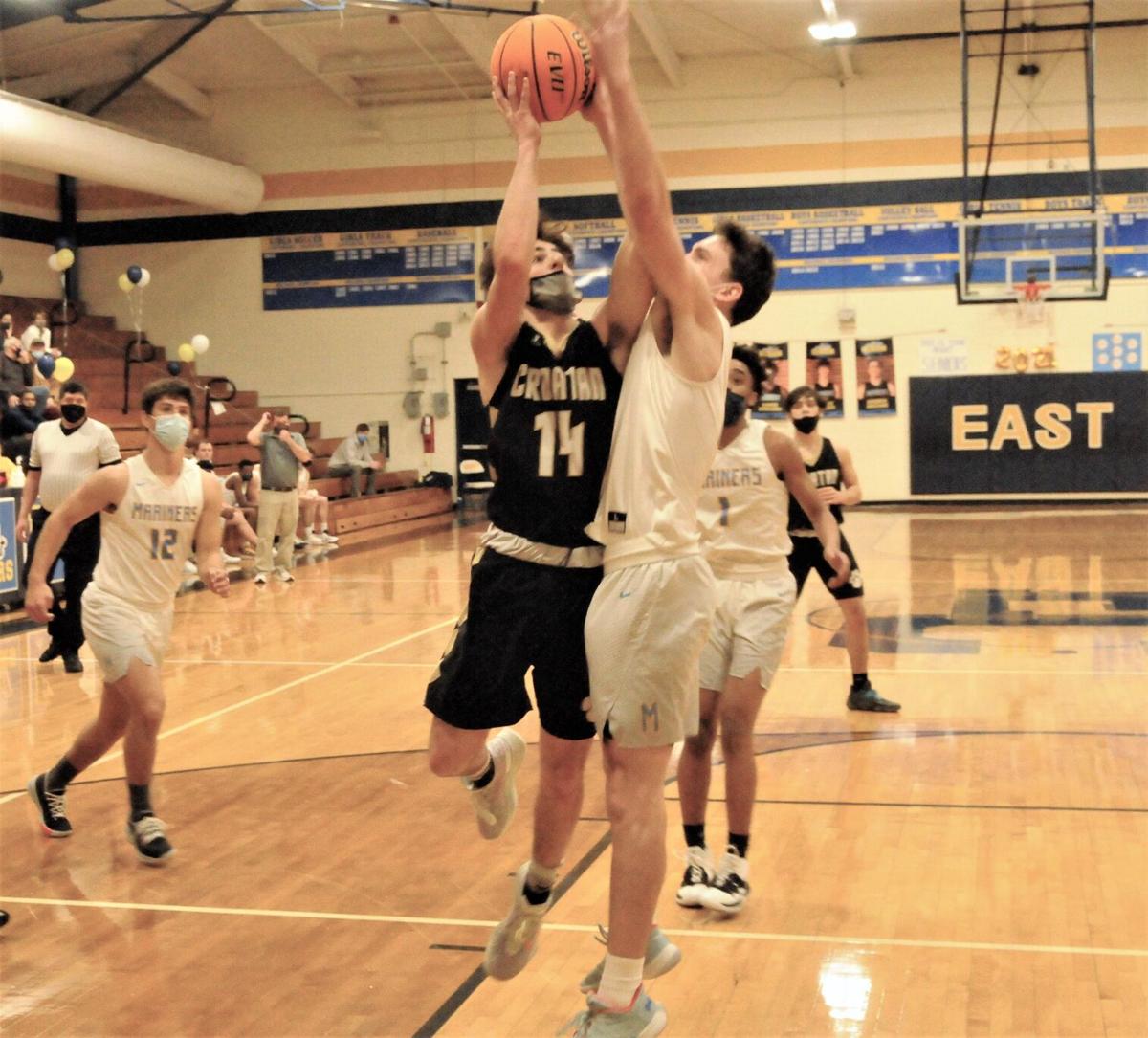 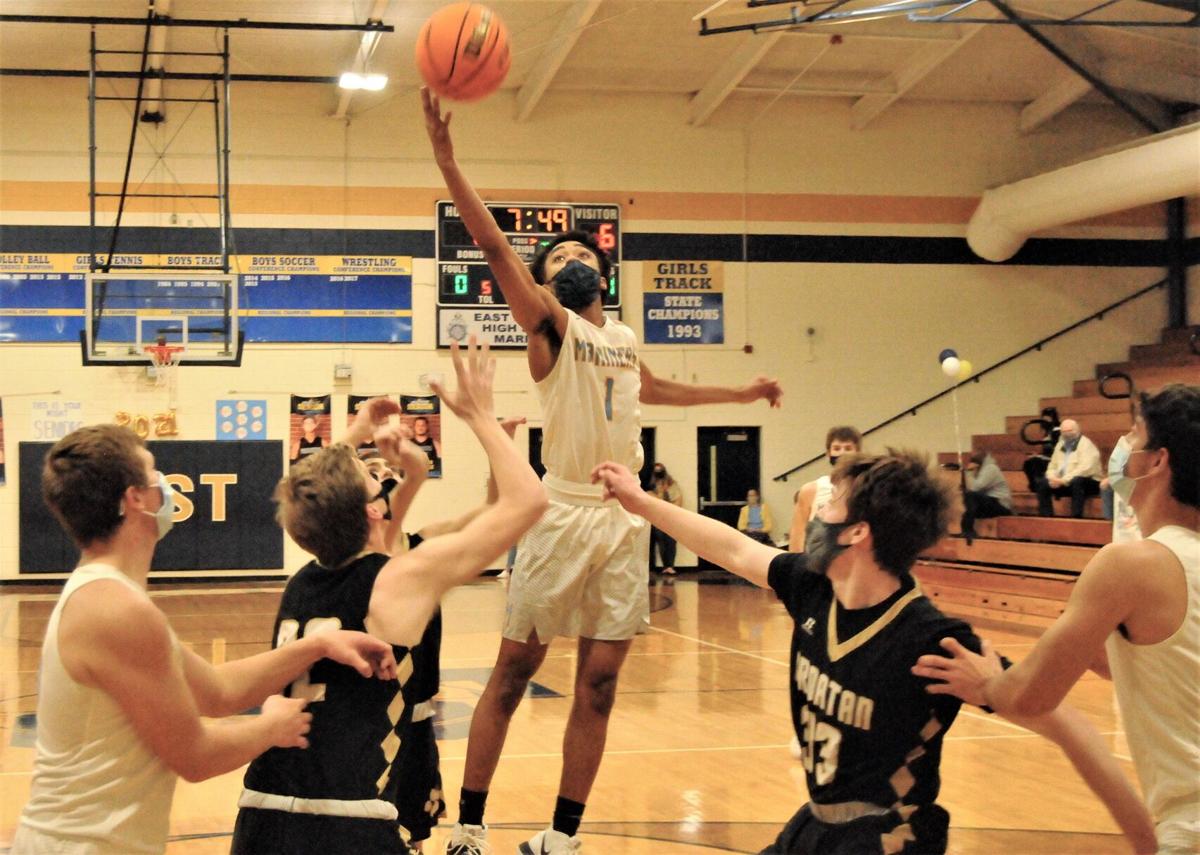 Shamel Baker stretches out for a rebound in the 47-34 win over Croatan. The East Carteret freshman scored 11 points in the contest. (J.J. Smith photo) 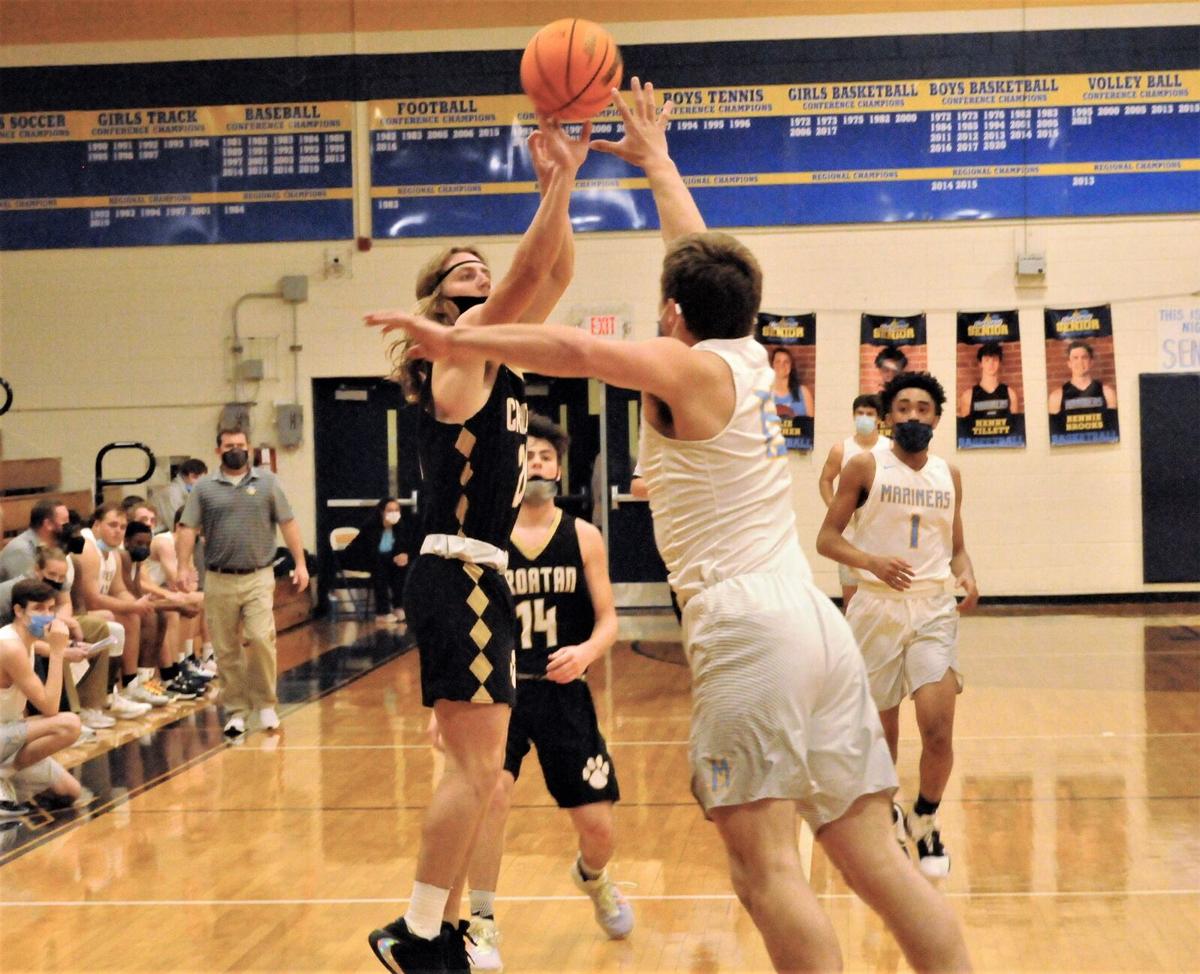 Croatan’s Dustin Hayden goes up for a jump shot in the 47-34 loss to East Carteret. (J.J. Smith photo)

East Carteret’s Bennie Brooks goes up for two of his game-high 21 points in the 47-34 win over Croatan. (J.J. Smith photo)

Shamel Baker stretches out for a rebound in the 47-34 win over Croatan. The East Carteret freshman scored 11 points in the contest. (J.J. Smith photo)

Croatan’s Dustin Hayden goes up for a jump shot in the 47-34 loss to East Carteret. (J.J. Smith photo)

The Mariners ended 10-0 to capture their second consecutive 1A/2A Coastal 8 Conference championship. They won their league games by an average of 25.3 points.

“I’m very happy,” East coach Daniel Griffee said. “It’s unexpected. I’m surprised we were able to get the whole season in. These kids are deserving of this conference championship, especially to go undefeated.”

The Mariners finish Coastal 8 play – they will go into a different conference next season with the new realignment – on a 23-game winning streak. They’ve gone 32-4 overall and 23-1 in league play since Griffee took the helm.

East has now won nine league championships in the past 11 years.

The third quarter proved to be the difference on senior night as the Mariners won their 17th straight game versus their county rival. Croatan hasn’t defeated East since Dec. 28, 2012 in a 70-60 affair.

“It was a good test for us,” Griffee said. “(Coach) Will (Sutton) has done a good job at Croatan. Hats off to him. He has turned them around and made them very competitive.”

Bennie Brooks scored eight of his team’s 13 points in the third quarter as the home team took a five-point halftime lead and pushed it to 14. Brooks finished the night with a game-high 21 points with 10 of those coming from the free-throw line.

“Bennie is an outstanding ballplayer,” Sutton said. “We held them to 47 points, and usually when you do that, you’ve got a good chance to win, but we couldn’t get anything to fall.”

The Cougars (8-5 overall, 8-4 league) scored just four points in the third period. They also put up only six in the first compared to 12 apiece in the second and fourth.

“Hats off to them and their defense,” Sutton said. “They played a heck of a game, causing turnovers.”

It was a much-anticipated game after the first matchup, a 66-47 win by East, got chippy at the end of the contest.

Cooler heads prevailed in the rematch, although the play was physical and sloppy with neither team ever getting in an offensive groove. The Mariners had scored less than 60 in a game just once before this season and entered the tilt averaging almost 70 points per game.

“We haven’t played any games in almost two weeks,” Griffee said. “You can’t replicate the intensity in practice. It was good to have a game where we struggled offensively and still came out on top.”

East last played on Feb. 9 in a 68-43 victory over Dixon. Games against Trask and West Carteret were canceled due to coronavirus concerns.

Shamel Baker was the only other East player to reach double digits in scoring, going for 11.

“We didn’t attack the basket enough,” Sutton said. “We struggled on the offensive end.”

Both teams said customary goodbyes to their seniors with both graduating big classes.

East will lose six, including stalwarts like Henry Tillett, Mason Rose and Brooks, but should bring back key players such as Jacob Nelson, Josef Lawrence, Charles Matheka, Cole Jernigan and Baker.

Croatan will hope to continue its current upswing but will have to do so with almost an entirely new roster after eight will graduate this spring, including seven of the top eight scorers.

“We’re losing a lot, the heart of team, but we have some talent coming up,” Sutton said. ‘I can’t take anything away from my kids. They played their butts off all year. I’m tickled too death for them. I just want to keep building, not settle for this, keep striving for excellence.”

The Cougars made the playoffs last year for the first time since 2013 thanks to a 6-8 league record and fifth-place finish. This season, they earned the program’s first winning record since 2013, and just the fourth overall in 23 years, with an 8-5 mark. They also matched the 2013 league finish by ending up third.

East will receive one of the top seeds in the 1A postseason when the playoff brackets are released Sunday afternoon, while Croatan can only qualify for the 2A playoffs via wild card.

Now they will likely have to play another Prep School in the playoffs.Seems unfair .