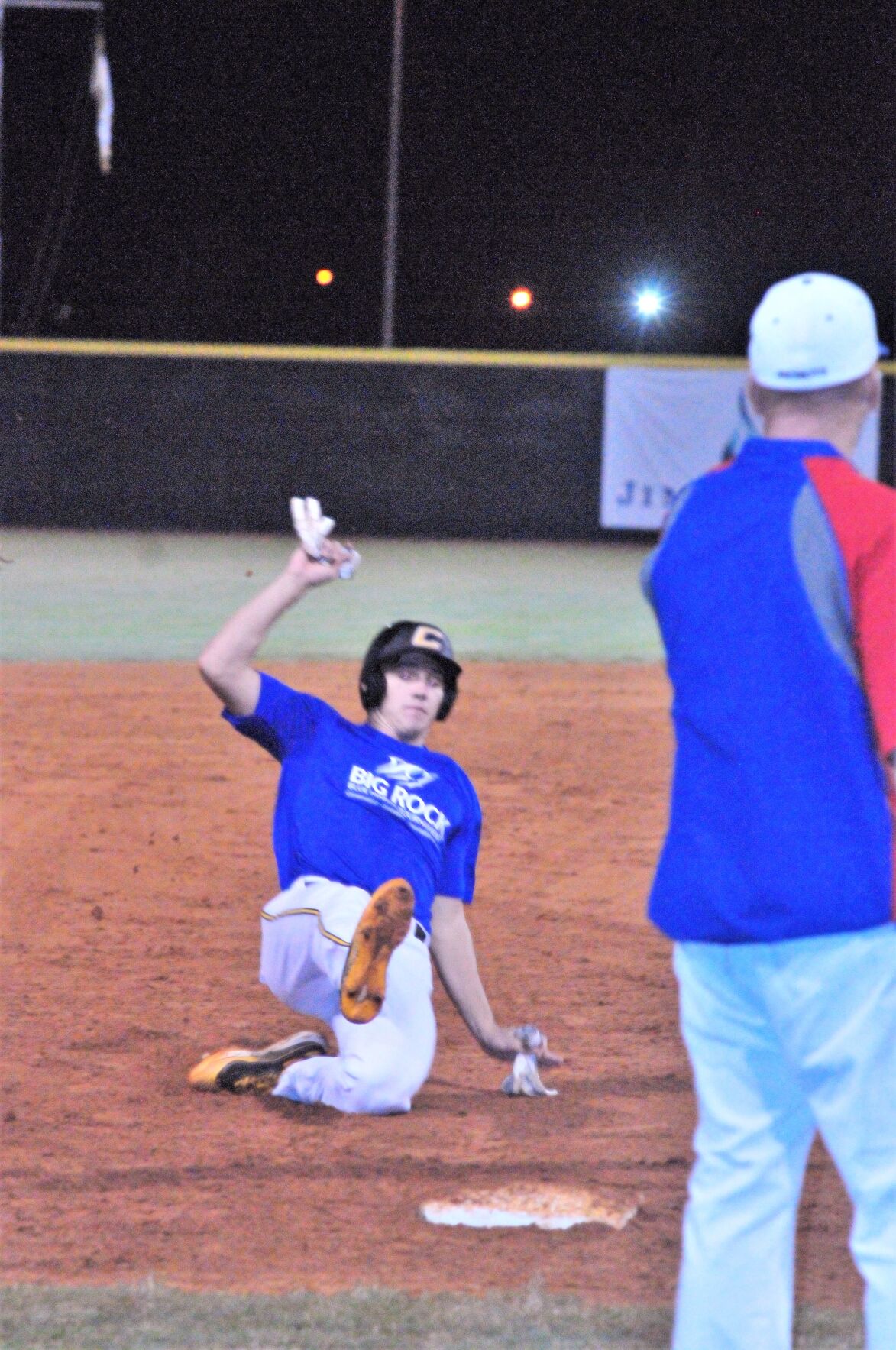 Matt Lasater of the Royal Blue team, coached by his uncle Robby Lasater, slides safely into third base Wednesday in the 6-1 win over the Orange team. (Zack Nally photo) 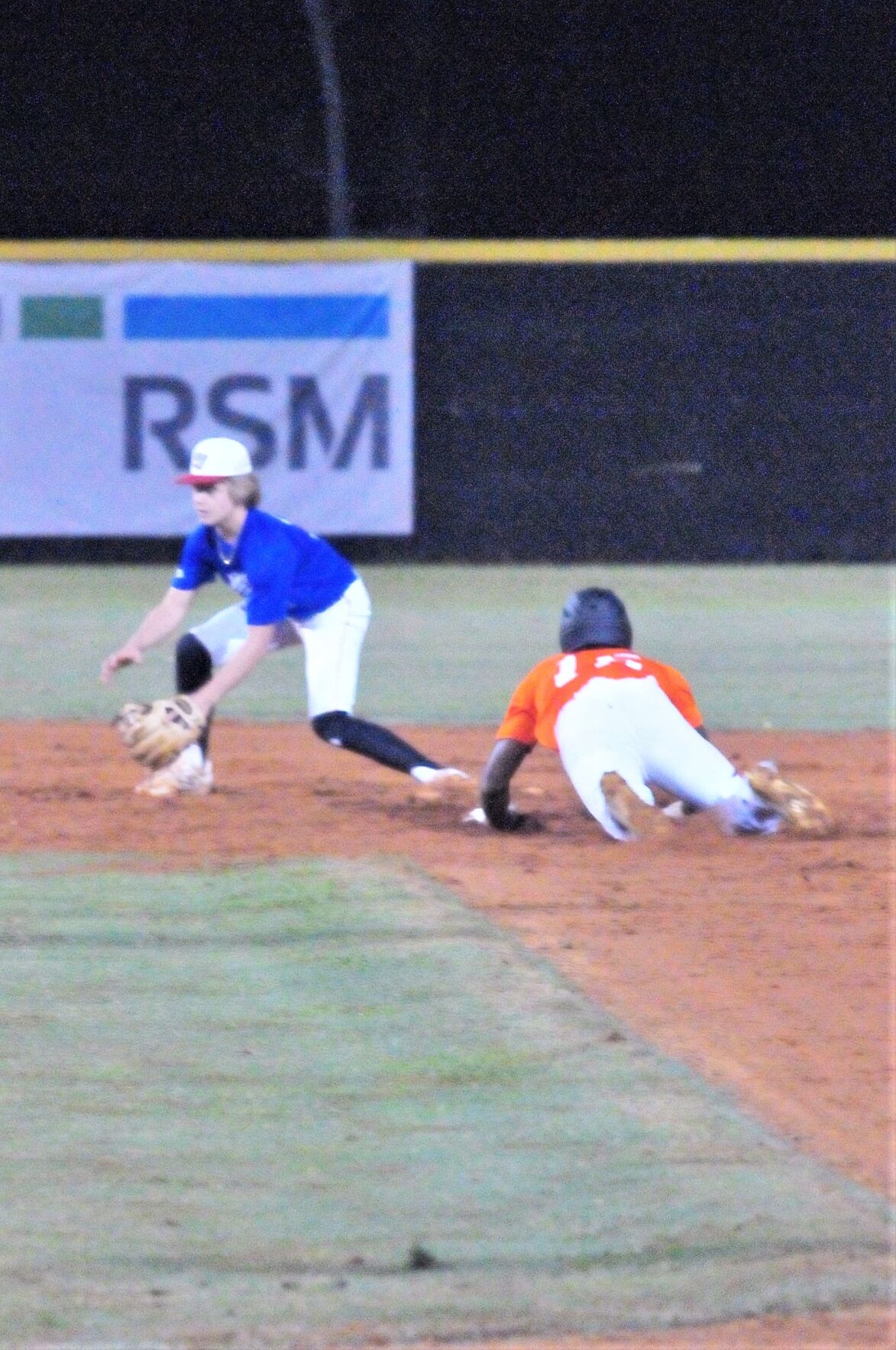 Andrew Frazier of the Orange team slides into second base Wednesday. He hit 1-for-1 in the game and scored his team’s lone run. (Zack Nally photo)

Matt Lasater of the Royal Blue team, coached by his uncle Robby Lasater, slides safely into third base Wednesday in the 6-1 win over the Orange team. (Zack Nally photo)

Andrew Frazier of the Orange team slides into second base Wednesday. He hit 1-for-1 in the game and scored his team’s lone run. (Zack Nally photo)

In the second of two shortened games that evening at Big Rock Stadium, the Royal Blue team scored three runs to take a 5-1 lead into the bottom of the third and eventually win 6-1. A double from Adam McIntosh and a string of five walks helped deliver the first win of the seven-week season for the Robby Lasater-coached squad.

“We did better, but (Orange) was wore out,” Lasater said. “The doubleheader is a tough thing to contend with. Whoever has that second game is going to struggle. There aren’t a lot of pitchers to go around, so you have the potential to run out pretty quickly.”

The Royal Blues moved to 1-1 while Orange fell to 0-2 after losing to Red 7-4 in the first game of a doubleheader.

In order to prevent an eighth week of the season, all teams will rotate a doubleheader night. With roughly 75 kids divided between five teams, however, pitchers are in short supply and even shorter supply for doubleheaders.

Time was also a factor on Wednesday, with the first game getting cut off at two hours and the second game around 90 minutes.

“We knew around two hours, we were going to cut it,” Orange coach Ryan McLendon said. “This was our first and second game, so we didn’t want to burn out our pitchers. It’s the first time these kids have played in a year, so there was some obvious rust. But I was happy with how they were swinging the bat. They faced some challenges.”

McLendon is a 2015 Riverside High School alum, and Lasater was a longtime head coach at West Carteret until 2017.

“They don’t know anybody, and neither do I,” Lasater said. “A couple of the guys from West Carteret, I remember them when they were freshmen. But they’re seniors now, and then it’s a whole new group of kids. So right now, it’s about getting to know the team and getting the kids to shake the rust off.”

The spring prep baseball season was canceled in March two weeks in due to COVID-19, leaving most student-athletes few options to play baseball until school sports resume next month. That gap in play showed itself across all three teams, with Orange taking on Red in the first game.

“(COVID) probably has a lot to do with it,” Lasater said. “One of the players on the team, he was pitching, and I asked him when the last time he pitched. He said March. That’s a long time to go without throwing a real pitch. So, I get it.”

As a fall baseball coach, Lasater is also getting the chance to do something he’s never done before – coach his nephew, Matt Lasater, a senior for Croatan. The younger Lasater pitched a solid two innings for the Royal Blue team, striking out six batters and allowing no runs or hits.

“He’s wanted to pitch for a while, and I’m glad he’s getting the opportunity,” Lasater said. “He’s gotten better every year he’s played, and he’s turned out to be a pretty good ballplayer.”

Like most, Matt Lasater has been off the baseball diamond for most of the six months since the high school season was canceled.

“It feels really good,” he said. “Last week, I played a little showcase ball, but this is different. COVID messed everything up, and so much has been canceled. But now it feels good to finally be back on the field. I’ve never been able to play for (Robby). He’s always been on the opposite team where I have to play against him.”

More than just playing for a coach you already know, the senior is playing with other players from the county, some he was already teammates with and some who he played against for three years.

“It’s fun getting to know them,” Matt Lasater said. “I have some people to play against and hang out with for a minute after the game. It’s being part of a team again, even if it’s not the usual guys.”

Matt Lasater scored the first run of the night for the Royal Blue team, walking to reach, advancing to second on an overthrow, stealing third and scoring on a pop fly to right field from Bryson Willis. In the second inning, Cody Shepard walked, and pinch-runner Holden Hamlin scored on a single from his brother, Sam Hamlin.

McIntosh laid down a double, his second hit of the night, to open the third inning for the Royal Blue team. He stole third and wound up scoring on an overthrow to second in an attempt to have Willis tagged out. McIntosh scored on an overthrow, and Willis scored on a sacrifice fly from Conner Arbegast.

Cody Shepard was the third of six batters walked in the frame, allowing pinch-runner Brayden Turner to score on a wild pitch. The team’s last run came in the fourth inning, with McIntosh laying down a single to get on base and scoring on a wild pitch.

The Orange team’s lone run came in the third inning, part of a string of four singles. Andrew Frazier led the action with a single to reach, followed by a Brandon Conway grounder to score him. Bryan Garner and Jacob Montayne also hit singles in the frame.

The best pitching of the night for Orange came at the end of the second game with Damon McAnallen striking out five and allowing just one hit and an earned run from McIntosh. He produced one of only three scoreless innings between both games for Orange.

“Damon did a really good job,” McLendon said. “Jacob (Nelson) started off strong and we wanted to stretch him out. I’m proud of the pitching tonight. They threw a lot of strikes.”

The winning pitcher for the Royal Blue team was Sam Hamlin.

The next game for the Royal Blue team is on Monday at 5:45 p.m. against Red.

Next up for the Orange team is a matchup with Marlin Blue on Monday at 8 p.m.

All games will take place at Big Rock Stadium in Morehead City.