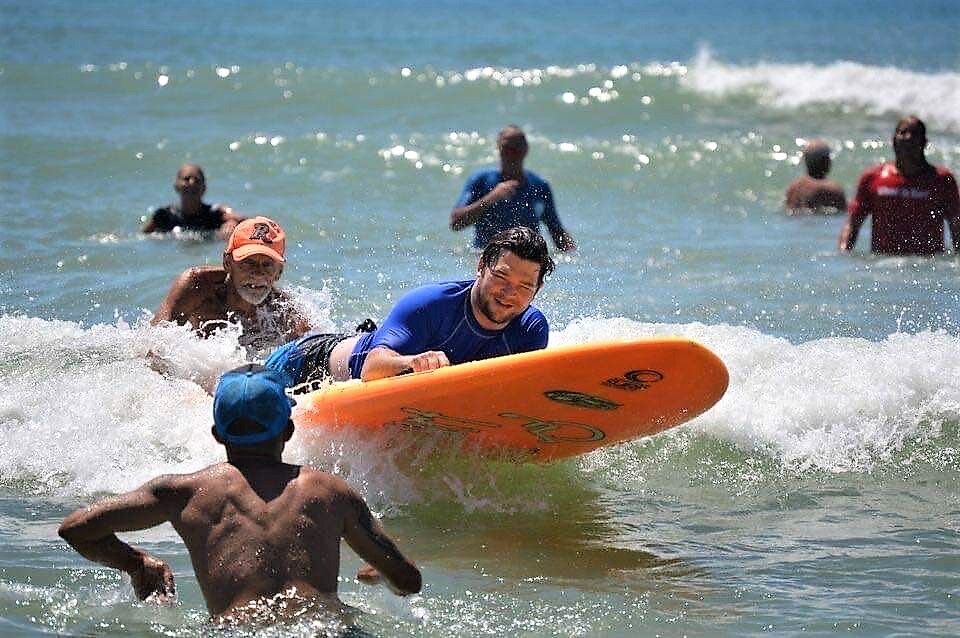 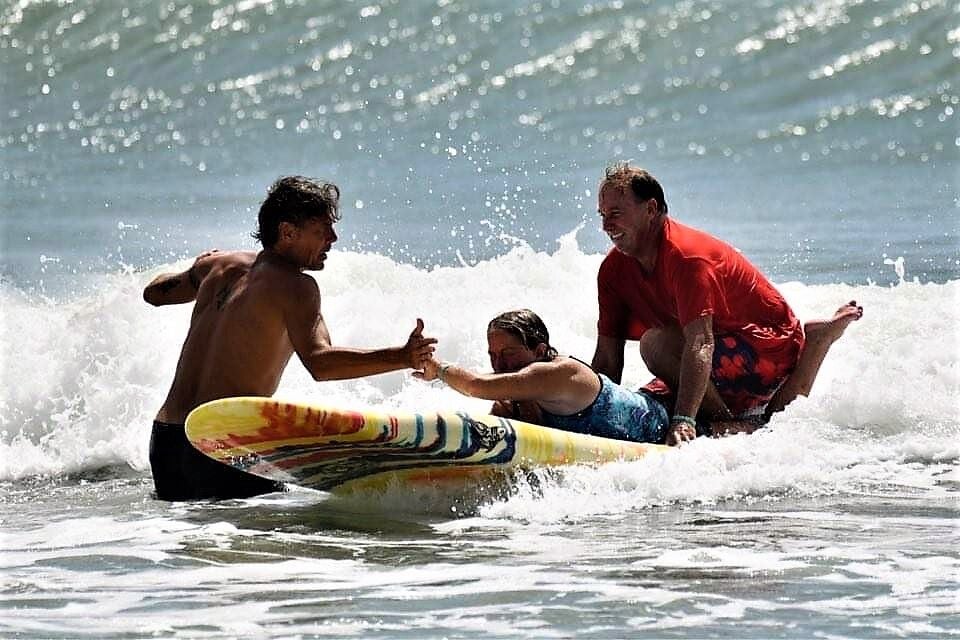 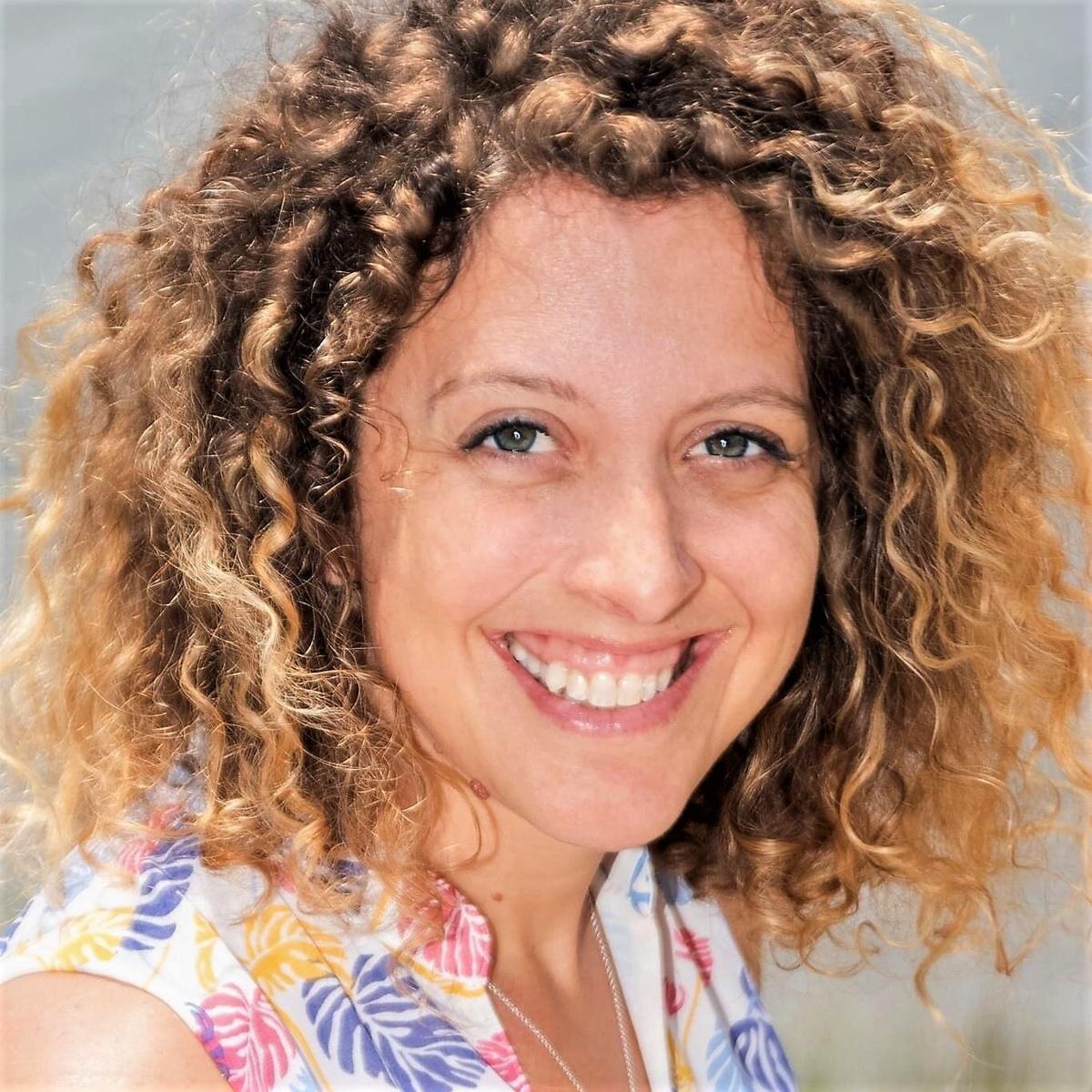 Christine Chadwick founded the Adaptive Surfing Project-North Carolina after growing up with a brother who was paralyzed from a dirt bike accident. (Contributed photo)

Christine Chadwick founded the Adaptive Surfing Project-North Carolina after growing up with a brother who was paralyzed from a dirt bike accident. (Contributed photo)

ATLANTIC BEACH — Christine Chadwick is working to break down barriers for those living with disabilities.

The founder of the Adaptive Surf Project-North Carolina provides that community with new possibilities three times a year with a day at the beach.

“It’s really cool,” she said. “Some are hesitant to come out, but usually once they’re out there, they are hooked. Even if they are not interested in getting in the water, they like just hanging out on the beach, talking to people.”

The goal of ASP-NC is to share the love of the ocean and surfing with everyone. Whether one can surf on his or her own, or he or she needs a tandem buddy, the goal is to show those with disabilities that nothing is impossible.

“It’s nice for them to see that they can do these things,” said Chadwick, a native of the Charlotte and Concord areas. “With a little extra help, they can do a lot of the same things as everybody else. It’s so cool. I can’t say enough about it. I love it.”

Now in its fifth year, the organization, like others, has been impacted by the coronavirus pandemic. Instead of its normal three days of adaptive surfing, the group has been relegated to limited outings with the most recent one coming on the final weekend of September.

“We thought we were going to cancel everything, but we kept getting messages, calls, saying they still wanted to surf,” Chadwick said. “It’s been especially tough with the quarantine. If you’re able-bodied, you can go to the beach. These folks already have it a little bit tougher, and then it’s hard to not be able to get out much at all and do anything, so if we could give them just a couple of hours, we couldn’t not do it.”

Chadwick was inspired to get into such work after her brother Donald was paralyzed at age 16 in a dirt bike accident. Living with someone who was a quadriplegic adapting to life in a wheelchair changed her. Donald died in 2008 at age 29.

“My whole life revolved around it as a kid, and to not have it anymore, it was strange,” she said. “When I used to date guys, I would tell them, ‘Donny is coming with us.’ He was going to be a part of my life. Then all of a sudden, that is gone, and I felt lost. I didn’t know what direction to go in anymore. It was such a big part of my life, I couldn’t walk away from it.”

Chadwick looked around for ways to get engaged and was especially interested in something involving the water – she and her husband Will surf – and six months after her brother’s death, she found Life Rolls On at Wrightsville Beach.

Established in 2001, the California-based outfit helps people living with disabilities catch a wave and drop into the bowl at the skate park, allowing them to live dreams once seemed impossible.

“I thought it wouldn’t have been possible that you could take someone like my brother surfing, but we went anyway,” she said. “Man, my mind was blown. I cried. It was beautiful.”

After 10 years of volunteering, she soon began thinking about bringing something similar to Carteret County.

“I realized more people from Carteret County were going down there for that event, and I asked them if this was something they would like to have back home, and they said they would love it,” Chadwick said. “We thought it would be cool to bring something like that to Carteret County.”

She went about the arduous work of setting up a 501(c)(3) nonprofit organization and soon discovered the Adaptive Surf Project out of North Myrtle Beach, S.C. After volunteering with that group for a year and a half, she learned it would be easier to become a chapter of ASP instead of starting from scratch.

“It just got us expedited through the system, because to get equipment and gear, adaptive boards, wheelchairs, it’s kind of expensive, so they helped us set everything up,” Chadwick said. “They are a really cool organization.”

She hoped she would have at least Gillikin and Kelly at the first ASP-NC event in October 2016, but Kelly died in 2015 at the age of 45, and the day was held in his honor. Lauren Goodwin and Gillikin, who is an ASP-NC board member, showed up for the first event at the bathhouse beach access at Fort Macon State Park with nearly a dozen volunteers on hand.

“It was a smaller event, but it was perfect,” Chadwick said. “We had the best time.”

“I had no idea we had such a disabled community here,” Chadwick said. “I figured those with major injuries would be closer to major hospitals, but Josh is a paraplegic, and he’s perfectly capable of living here. All of a sudden, I’m becoming aware of this community. There is not much for them to do, so you don’t see them. They’ve never been able to go to the beach, but they are here.”

Chadwick said it’s just not a day at the beach, but more so, a sense of community that is created by these events. Gillikin and Goodwin have developed a friendship, as have many of the volunteers.

“Lauren says nobody teaches you how to be handicap, so it’s nice to have someone help you learn things,” Chadwick said. “They help each other out, and it’s neat to see. And I’ve met volunteers of all ages and from all walks of life, people I might have never met. Some of them have been through their own tough times, and it helps them to give back, be a part of something bigger than them. Stuff like this brings out the best in everyone.”

To learn more about the Adaptive Surf Project-North Carolina, visit adaptivesurfprojectnc.com or contact Chadwick at 252-205-5026 or cchadwick.aspnc@gmail.com.

Kudos to the volunteer instructors . Everyone needs a little sunshine in their lives , everyone . A shame it can’t be more often but I’ll take it . Thank you all .

A small portion of the money used to subsidize wealthy ocean front property owners (beach nourishment) could go to helping elderly and disabled gain beach access. Wouldn't that be nice ?