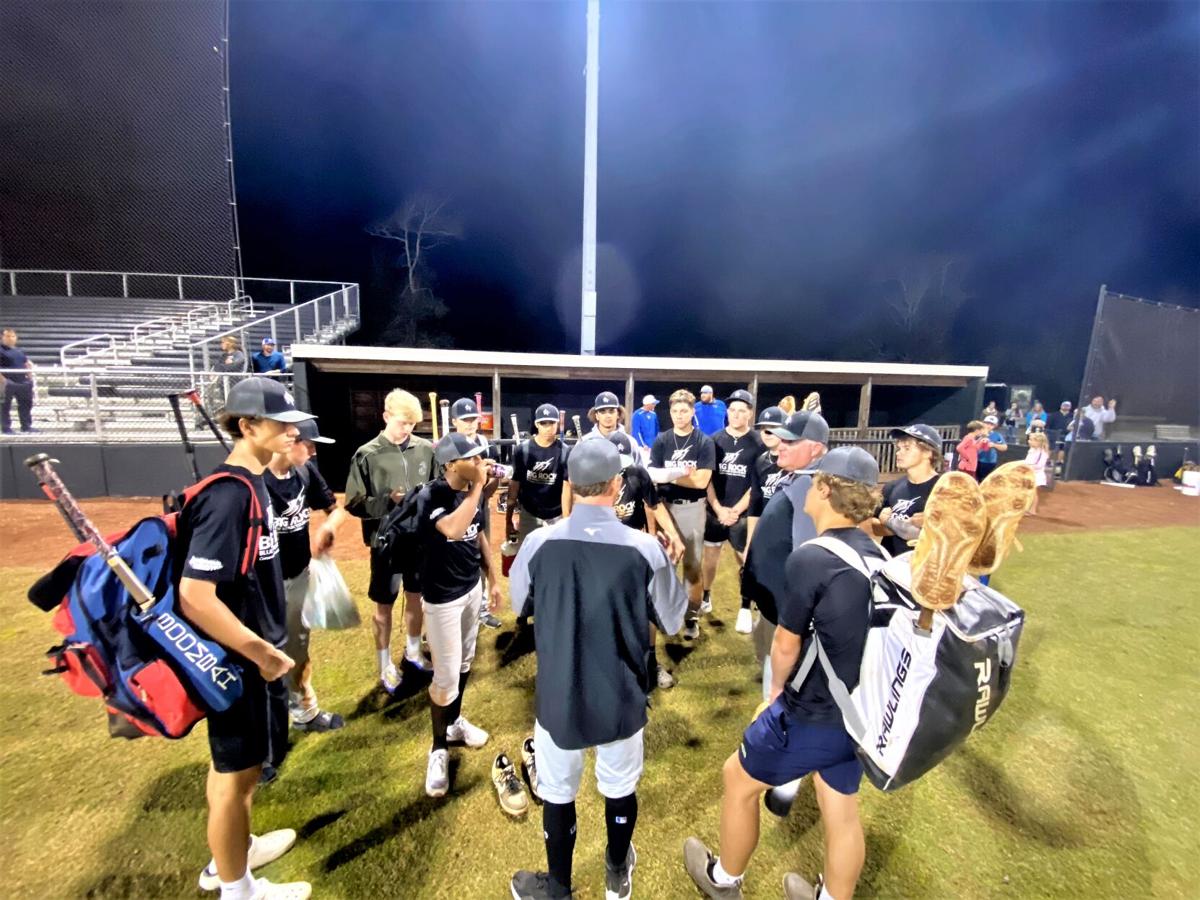 The Black team finishes as the second-best team in the Big Rock Fall Baseball League at 5-3 with a 4-2 win over Orange on Tuesday. (Zack Nally photo) 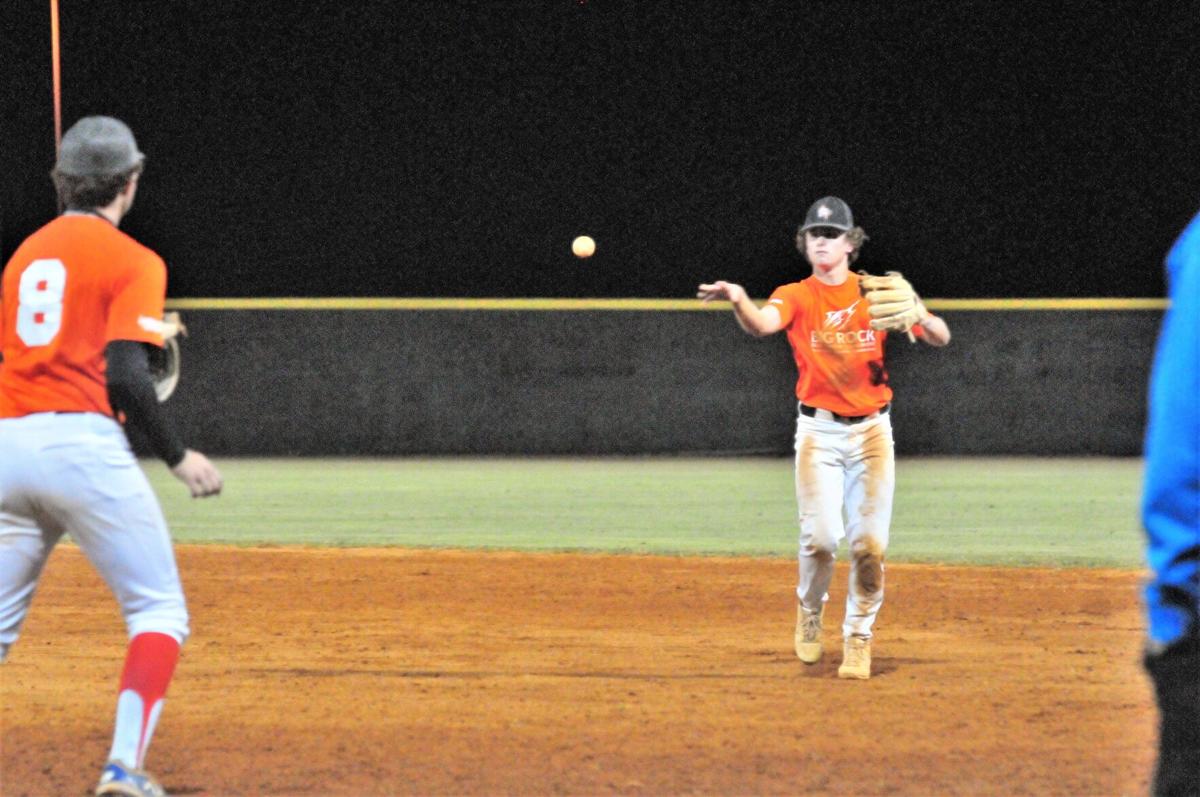 Bryan Garner of the Orange team looks for the putout with a throw to first on Tuesday in the 4-2 loss to Black. Garner struck out nine and allowed two earned runs in five innings on the mound. (Zack Nally photo)

The Black team finishes as the second-best team in the Big Rock Fall Baseball League at 5-3 with a 4-2 win over Orange on Tuesday. (Zack Nally photo)

Bryan Garner of the Orange team looks for the putout with a throw to first on Tuesday in the 4-2 loss to Black. Garner struck out nine and allowed two earned runs in five innings on the mound. (Zack Nally photo)

Black’s 4-2 victory served as the first in a doubleheader to end the season and improved it to 5-3 overall under head coach Jimmy Paylor. The game was moved up to Tuesday due to expected rain on Wednesday and Thursday.

“Not a pretty baseball game, but we hung in there and made the plays,” Paylor said. “If your pitchers throw strikes and you make the simple plays, you’re going to be in the baseball game.”

Paylor, who led the Black team to a 5-3 record, was one of the first people contacted about the new league when it came to fruition in September. It was created to help offset time lost on the diamond this spring due to COVID-19.

Orange coach Ryan McClendon is still fairly new to the county, but he was pleased with the impromptu league’s results.

“I want to thank Buddy Bengel for setting this all up for the guys,” McClendon said. “Things are wild right now, and to have some normalcy by coming out to a baseball game twice a week really helped them and helped us. I hope they do it again next year.”

McClendon helped turn around a squad that started season 0-6 and finished 4-7.

“They went from 0-6 to being able to compete and fight with anyone in this league,” he said. “That’s what we wanted, for them to feel like they could step on any field and fit in.”

Orange scored the first runs of the night against Black. Damon McAnallen walked to reach and scored on an error. He was almost tagged out in a pickle between third base and home, but he dove safely back to third, only to have Hunter Sinsel behind him get tagged out when he tried to advance to third at the same time. Sinsel was pinch-running for catch C.J. Garner who laid down a single to reach.

The second run for Orange came from Bailey Finn who hit a single to get on base and scored on another error. Finn’s hit was the second and last one for Orange all night.

In the bottom of the fourth inning, Ryan Bellamy and Owen Bellamy both hit singles to get on base for Black. Nate Michalowicz pinch-ran for Ryan and scored on a passed ball. After Austin Odom hit a single to join Owen’s pinch-runner Lamar Teel on base, both scored on a single from Ethan McLaughlin.

McLaughlin scored on a passed ball to make it a 4-2 game, taking a shot in the jaw from the throw home in the process. The West Carteret senior walked back to the dugout on his own power, but light medical attention was needed.

It was the second medical scare of the night, following a second-inning pitch that hit Orange’s Rhys Zahnd in the head. The hit prompted a call to an ambulance, but Zahnd was able to get up and walk back to the dugout.

Black made a pitching change after the hit, switching from Owen Bellamy to Ryan Bellamn, with Owen taking his normal spot behind the dish. Ryan pitched the rest of the game, striking out three and leading the defense to three straight outs in the third, fifth, sixth and seventh innings.

“He came in to relieve his brother and shut the door,” Paylor said. “He had command of his fast ball and his curve all night.”

Ryan Bellamy, who hit 1-of-2 on the night, had a bizarre start to his night.

“I got a flat tire on the way here, so it was kind of crazy getting here right when the game started,” he said. “The coach said I was hitting right away, so I kind of had to shake it off and get focused.”

Orange didn’t register a hit over its final three at-bats but not for a lack of trying.

“Black played fantastic defense,” McClendon said. “We hit the ball hard. Nine of our last 11 outs were hard groundballs. That’s what we want them to do, but (Black) made some great plays in the field.”

“Bryan had a fantastic night,” McClendon said. “He had nine strikeouts in five innings. He threw a couple that got lost, but that’s OK. His brother, C.J., did a great job behind the plate too. We fought hard, they fought hard. It was a great game.”