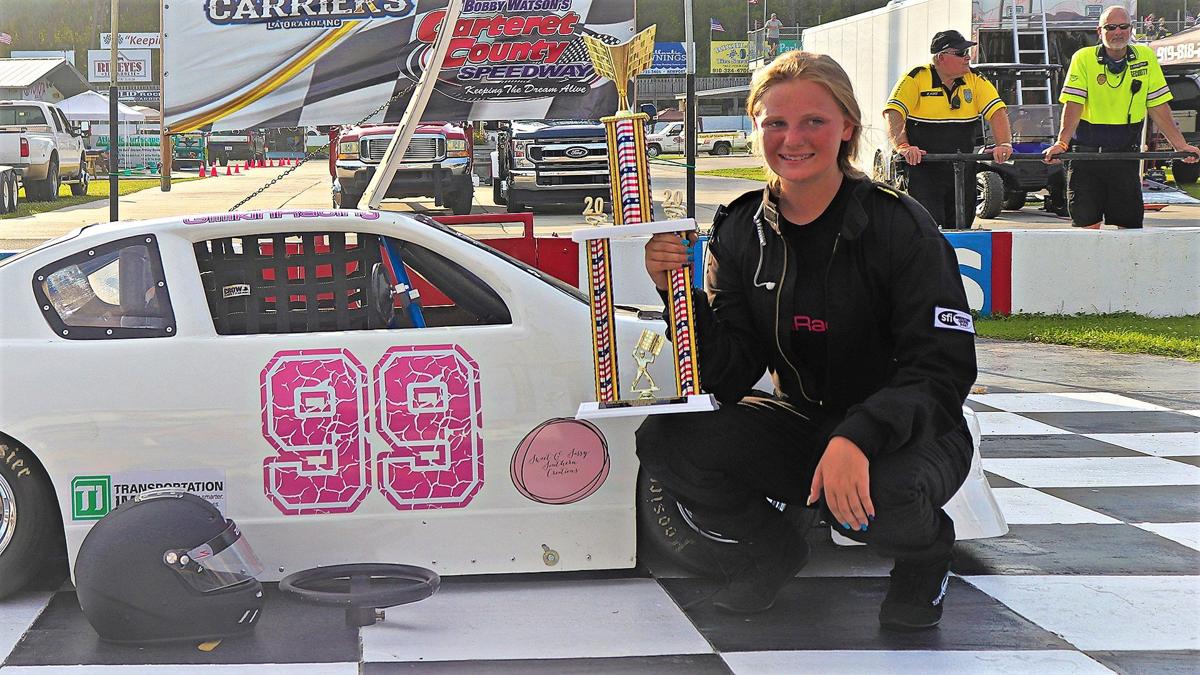 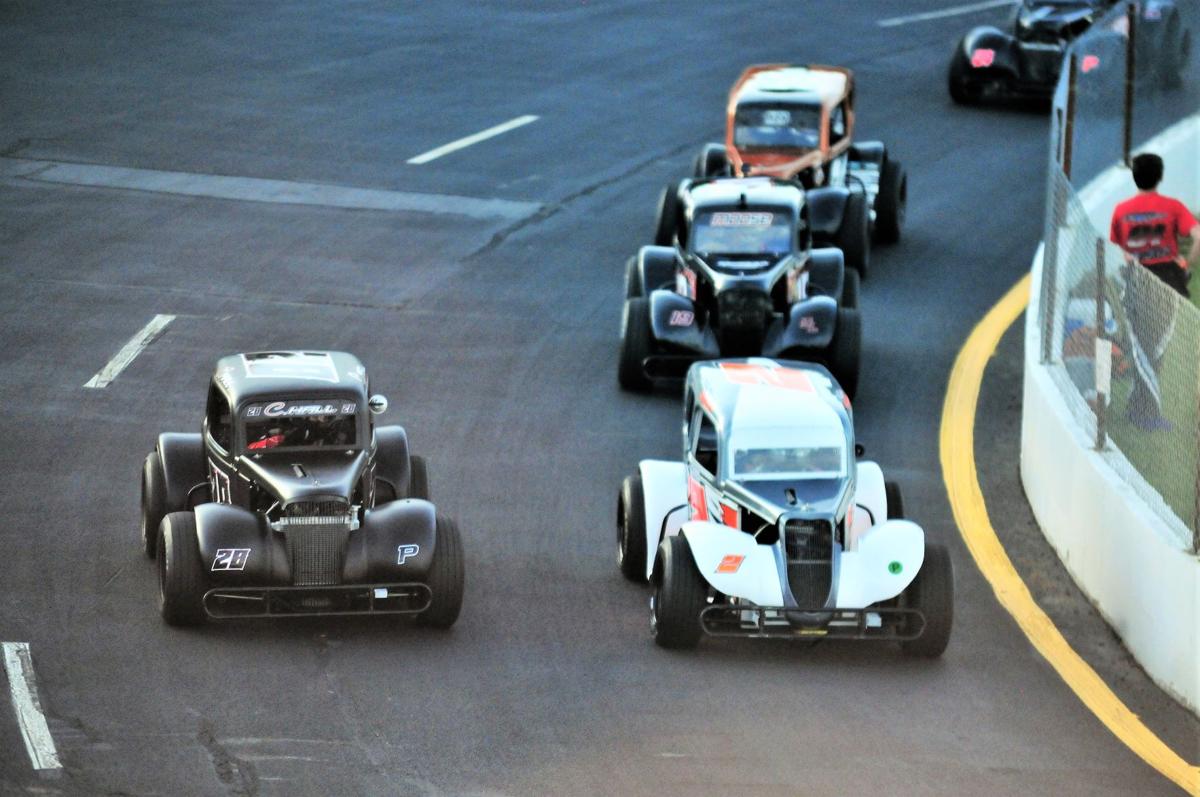 Cody Hall, left, and Austin Thompson battle for the top spot in the first of the Legends doubleheader races on Saturday, June 27. Thompson won but was later disqualified to give Hall the victory. (Zack Nally photo) 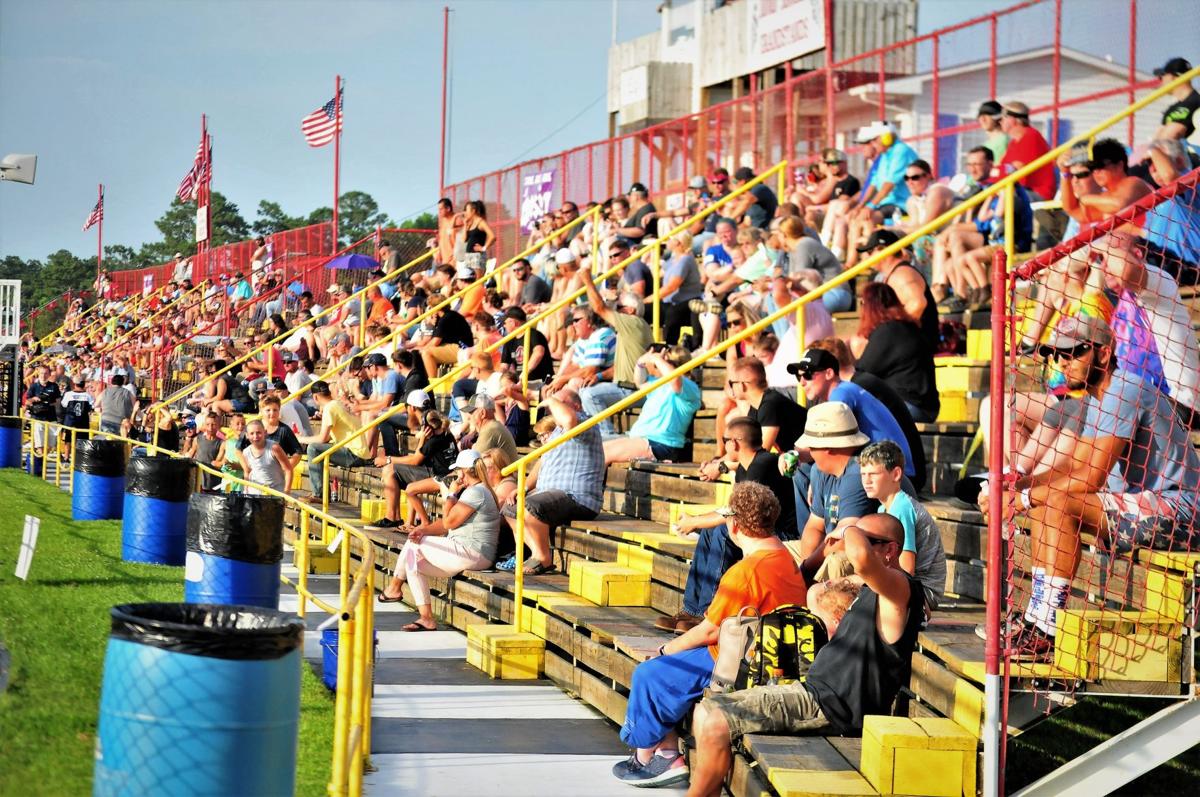 Cody Hall, left, and Austin Thompson battle for the top spot in the first of the Legends doubleheader races on Saturday, June 27. Thompson won but was later disqualified to give Hall the victory. (Zack Nally photo)

Fans lined the fence and filled the stands in a socially distanced manner as Mini Cups, Legends, East Coast Flathead Fords and Bombers took to the short track for an evening of sensational driving and thrilling finishes.

“We created a lot of memories Saturday (June 27), memories that won’t get taken away,” track owner Bob Lowery said. “We’ve had people call up and thank us for going forward with the season. We feel like it’s an unforgettable experience, and we’re proud to provide memories that last a lifetime, especially in times like these.”

With outdoor venues under fire for overcrowding amid COVID-19 concerns, Lowery was adamant about keeping people appropriately spaced out on race day. In addition to the bleachers being marked, concessions lines were marked 6 feet apart and masks were encouraged, so much so the track held a “Best Mask” contest with a cash prize.

“We were serious about it,” Lowery said. “We not only run a business here, but we also live in Carteret County. So, we have a vested interest in providing a safe environment for everyone that attends. We kept an eye on areas that are prone to crowding. People tend to gather at the front of the bleachers, so we pushed the crowd to the back catwalk and the other areas. We invited people to bring lawn chairs so they could spread out. People were appreciative of the precautions. People felt comfortable wearing masks without getting shunned for it.”

The opening night had plenty of feel-good and thrilling moments, including the first race between Jr. Mini Cup competitors. Fourteen-year-old Carsyn Gillikin of Newport, who also sang the National Anthem before the race, captured a victory in her first-ever official race.

“It’s definitely not what you picture when you’re off the track and looking down on it,” Gillikin said. “It’s totally different when get in the car. It’s honestly not even scary. Your adrenaline is going, and you’re having a lot of fun. You’re just trying to catch people the best you can. It’s just a lot of fun to be out here.”

Jr. Mini Cup cars average top speeds of 45 mph, but Gillikin has reached a peak of 62.

“When you’re going that fast and you’re only an inch off the ground, it feels like you’re going 100,” she said.

Gillikin spent most of the race chasing Scotty Benford, 15, of Swansboro before her cousin, 10-year-old Mylah Provos of Swansboro, spun out and prompted a caution flag. When the race resumed, Gillikin made her move on the outside and passed Benford for the lead and the win.

“To be completely real, I don’t think I would have thought of that plan without the caution,” Gillikin said. “That few minutes of sitting there, I kind of envisioned the track and my head and thought about what I could do. This kid was killing me on the straightaways, but during the turns, I was on him.”

After the race, Gillikin emerged from a hot, enclosed driver’s seat smiling ear to ear. One of the first there to congratulate her was her 17-year-old brother, Gavin, a basketball standout at West Carteret High School.

“I don’t think he really got the gist of it until today when he saw me warming up,” the younger Gillikin said. “It felt a lot different to be the one in the winner’s circle versus looking down at it. Different, but a good different. It’s a little overwhelming, and it feels big.”

After the race, the Jr. Mini Cup drivers gathered in the Moonshiner’z Café in the middle of the track to hang out with each other, including Caleb Braswell, 11, of Newport, Alexis Stefan, 13, of Swansboro, Provost, Gillikin and Benford.

“There’s no hard feelings,” Gillikin said. “It’s just to see who can do their best. No one’s out there purposely trying to wreck anyone. It’s just driving in the moment.”

Benford finished second in the race, while Braswell came in third.

While Gillikin was just getting her feet wet on the track in her first-ever race, East Coast Flathead Ford winner Johnny Johnson had seen a race or two. The Winston-Salem resident turned 80 years old the following day, June 28.

Johnson dedicated his win to neighbor Jerry Stroud, who lives right next to the track and is also 80 years old. Wayne Lawson, 64, of Willis placed second and Dennis Andrews, 63, of Siler City was third.

In the Mini Cup division, 16-year-old Aiden Hetu, son of driver Kris Hetu, overcame a long second-place position with a pass of 15-year-old Joseph Bryant of Winnabow in the final lap to secure the victory. Hetu was visibly exhausted after the race but had enough breath to dedicate his win to his grandfather, Ronnie, who is battling stage IV cancer and was present at the track for the victory.

“I just want to dedicate this win to my grandpa,” Hetu said. “He’s been going through some hard times, and I just wanted to win this race for him because he means the world to me.”

Bryant placed second in the Mini Cup race, and Dominic Chisholm, 13, of Hampstead was third.

The Legends doubleheader underwent some controversy as Austin Thompson, 23, of High Point initially swept both races but was later disqualified after reviews of the finish and a postrace technical inspection.

The disqualification led to Cody Hall, 19, of Griffin, Ga. winning the first Legends race and Jaiden Reyna, 13, of Cornelius picking up victory in the second.

As the opening night was winding down, Lowery was still making his rounds, getting to know track regulars and newcomers.

“We had people come out who didn’t care a thing about racing, but they just wanted to get outside with some other people,” Lowery said. “Now that they came, though, they had the best time. The action and the camaraderie make them want to come back.”