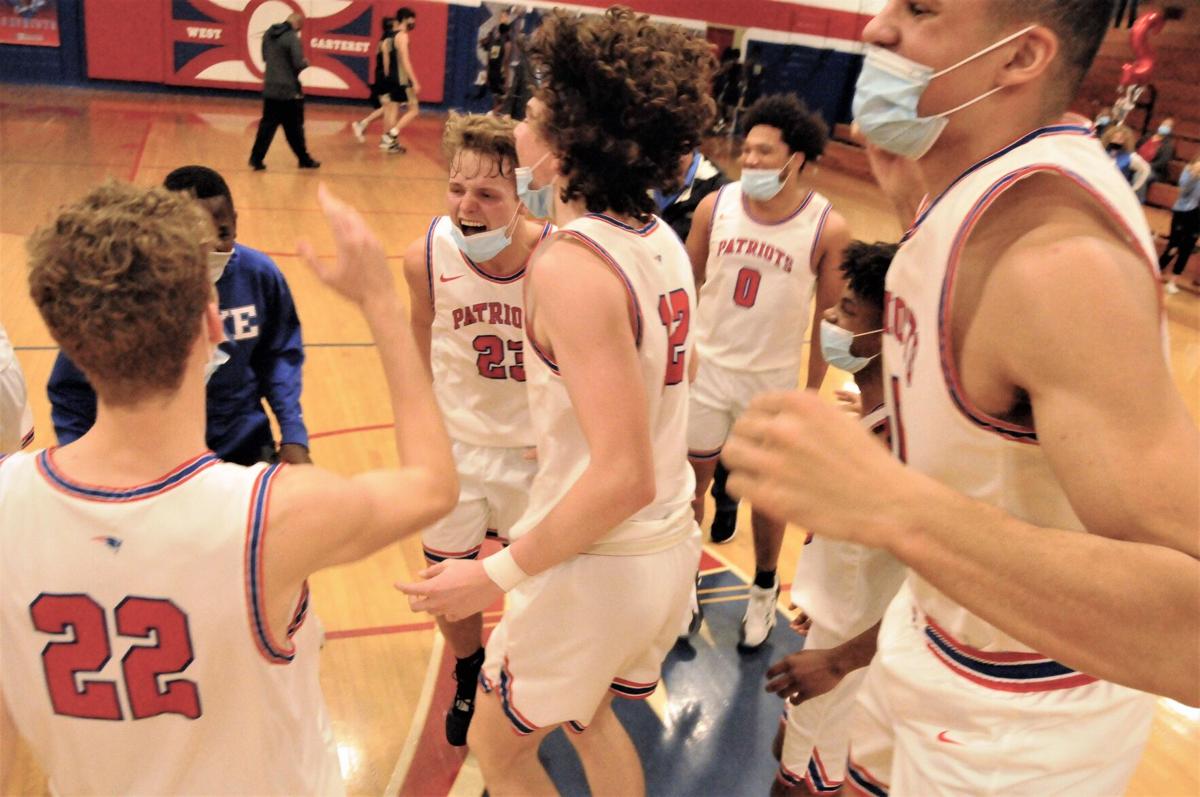 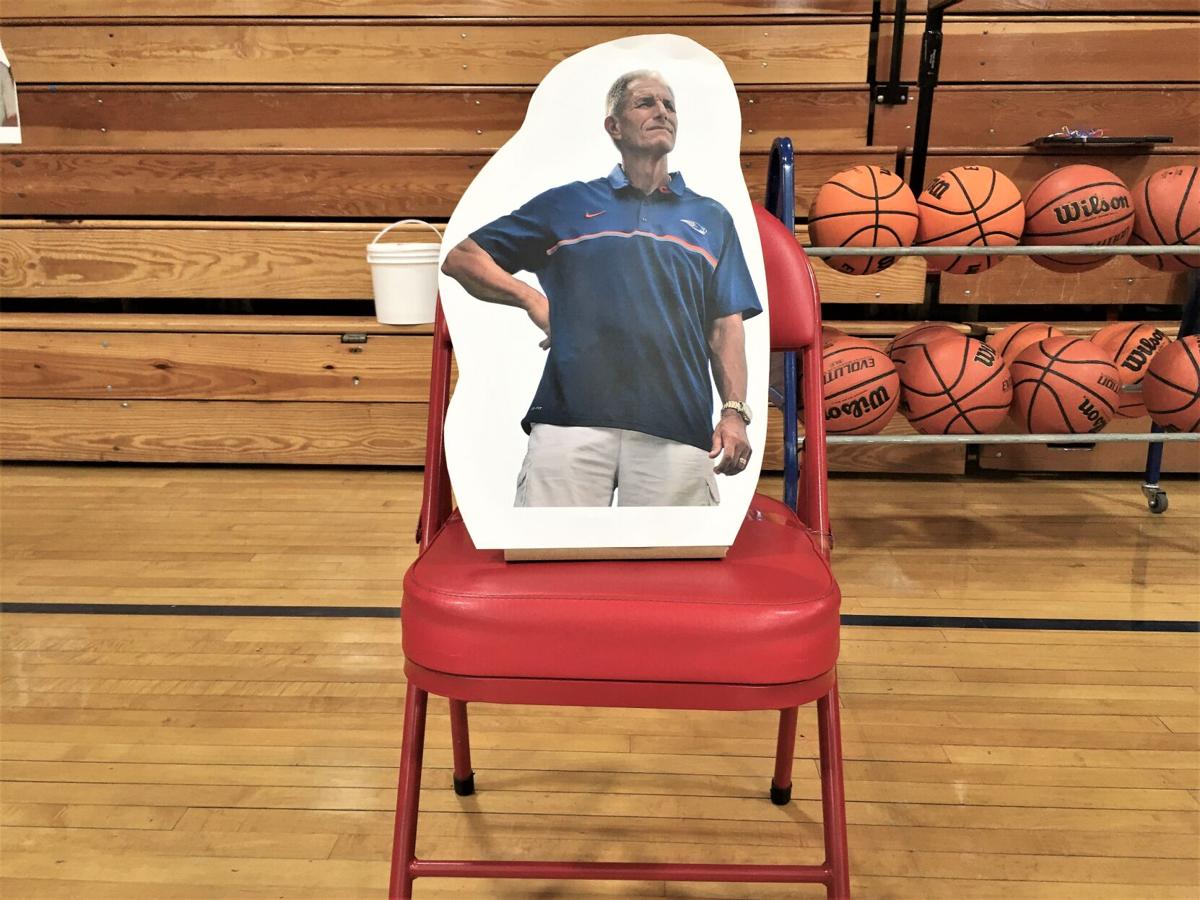 The Patriots place a cutout photo of their late coach Craig McClanahan on the bench for the 65-44 win over Northside that clinched a third consecutive conference crown. (J.J. Smith photo) 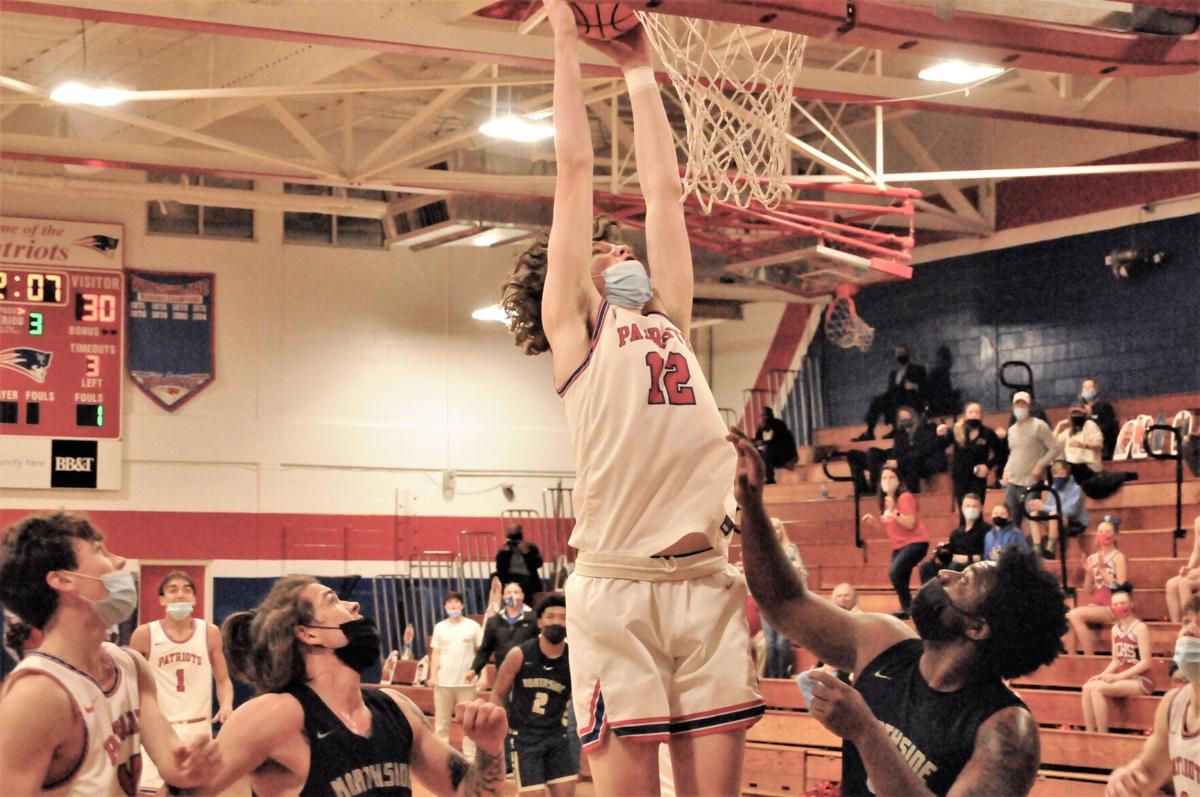 Jaxon Ellingsworth goes up for one of his four dunks Thursday in the 65-44 win over Northside. Ellingsworth finished with a game-high 26 points. (J.J. Smith photo) 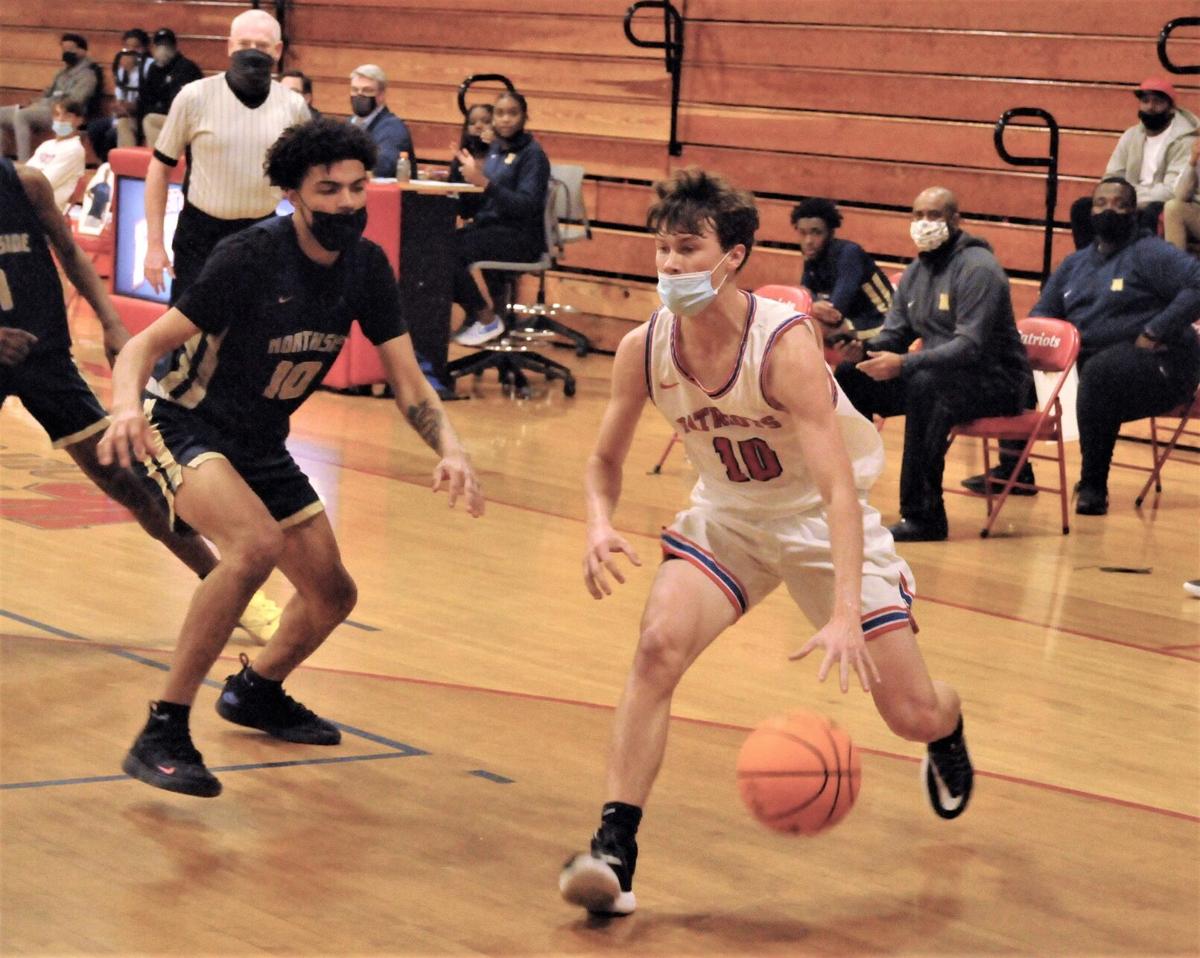 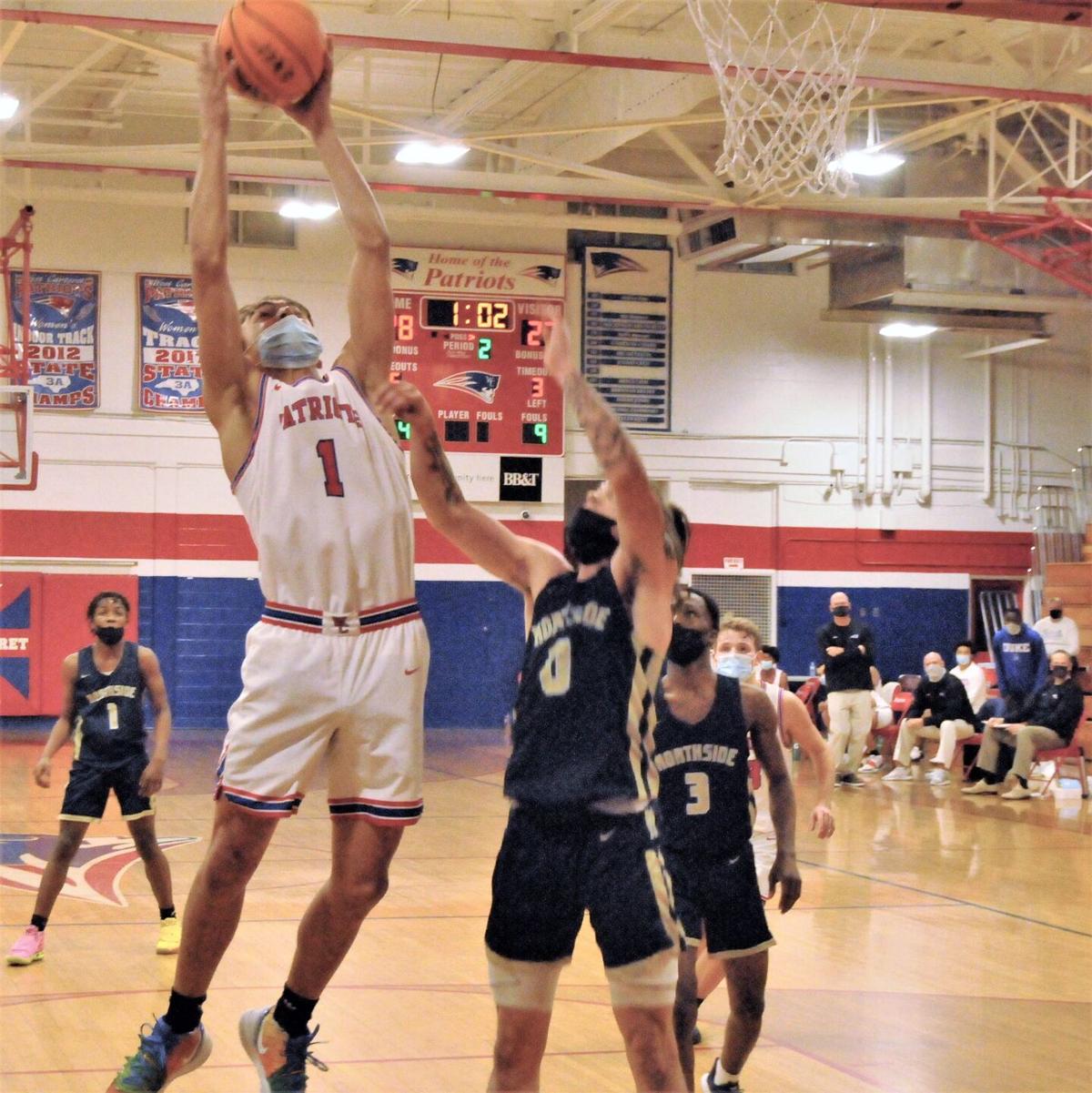 The Patriots place a cutout photo of their late coach Craig McClanahan on the bench for the 65-44 win over Northside that clinched a third consecutive conference crown. (J.J. Smith photo)

Jaxon Ellingsworth goes up for one of his four dunks Thursday in the 65-44 win over Northside. Ellingsworth finished with a game-high 26 points. (J.J. Smith photo)

MOREHEAD CITY — The West Carteret boys basketball team accomplished something Thursday that had been done just once in the program’s 57-year history.

The Patriots won their third consecutive league championship with a 65-44 victory over Northside-Jacksonville in their 3A Coastal Conference finale.

“This means a lot,” West coach Mark Mansfield said. “Coach (Billy) Widgeon did it, and now we’ve done it.”

Mansfield was a part of the last three-peat as he starred on the 1985 and 1986 league champions. The 1985 team went on to win the 3A state title. West earlier won the 1986 conference crown.

Mansfield took over the program last season after Craig McClanahan retired in 2019 following a 21-year run as the head coach. McClanahan died last June from cancer at age 59.

“We had a picture of Craig with us tonight,” Mansfield said. “He led this program for a long time. He’s still very much remembered, very much missed. We did it for him.”

The Patriots entered the tilt with a four-game winning streak and 7-2 league mark while Northside was 6-2. The teams were nearly in the same situation last season when West entered the finale 9-0 and the Monarchs were 8-1. The Patriots won that matchup 56-51.

This year’s finale looked headed for a comparable finish with West holding a 35-30 lead with 4:37 to go in the third quarter. The home team then scored the next nine points and ended the frame on a 13-2 run to take a 48-32 advantage into the fourth.

Jaxon Ellingsworth led the charge with six points, followed by Rob Cummings with three and Gavin Gillikin and Shane Graves with two apiece.

“Sometimes we have a tendency to want to do it on our own, one-on-one,” Mansfield said. “It’s a team sport. We played better as a team during that stretch, and that made the difference.”

Ellingsworth scored a game-high 26 points, netting seven in the first quarter, nine in the second and 10 in the third. He ended the night with four dunks.

Cummings added 16, and Gillikin went for 15.

James Kenon and Gillikin, who were celebrated on senior night, became the first West players in school history to win three conference championships. There were no sophomores on the 1984 squad that went on to win three in a row.

“It’s a little bit of history for those guys, so that’s pretty awesome,” Mansfield said.

Ethan McLaughlin didn’t score, but Mansfield credited his defense and rebounding in the second half as a reason for the improved play.

“He brought a spark,” he said. “His energy level and intensity was big.”

The Patriots led by as many as 22 in the final period after starting the quarter on a 11-5 run, thanks to back-to-back buckets from Cummings and then consecutive buckets from Gillikin. Graves capped the stretch with a three-pointer.

Neither team led by more than four points in the first half.

Trailing 27-25 with 2:02 remaining in the second quarter, Gillikin hit a trey, Cummings found two points on a strong drive in the paint, and Dylan McBride hit one of two free throws after getting fouled while hustling to the rim as the final seconds ticked off the clock, giving West breathing room at 31-27.

“It was a little worrisome there in the first half,” Mansfield said. “They came out shooting the ball well, and we were not responding well to adversity. But we turned it around, started to rebound better, started to share the ball.”

Northside’s Ronnie Thompson scored 10 of his team-high 20 points in the second quarter. No other Monarch reached double digits.

“You hate to win that way, but we played three games without James Kenon and Jake Bradley,” Mansfield said. “You want to beat people at their best, but we beat them with him last time. We were fortunate. We got them in foul trouble in the first half, and they weren’t able to be as aggressive in the second half. They’re a good team.”

West went 7-of-11 from the foul line in the first half while Northside shot 1-of-2. In the second half, the Patriots shot 6-of-8 while the Monarchs went 8-of-14.

West will end the regular season at home Wednesday with a county clash against East Carteret (9-0).