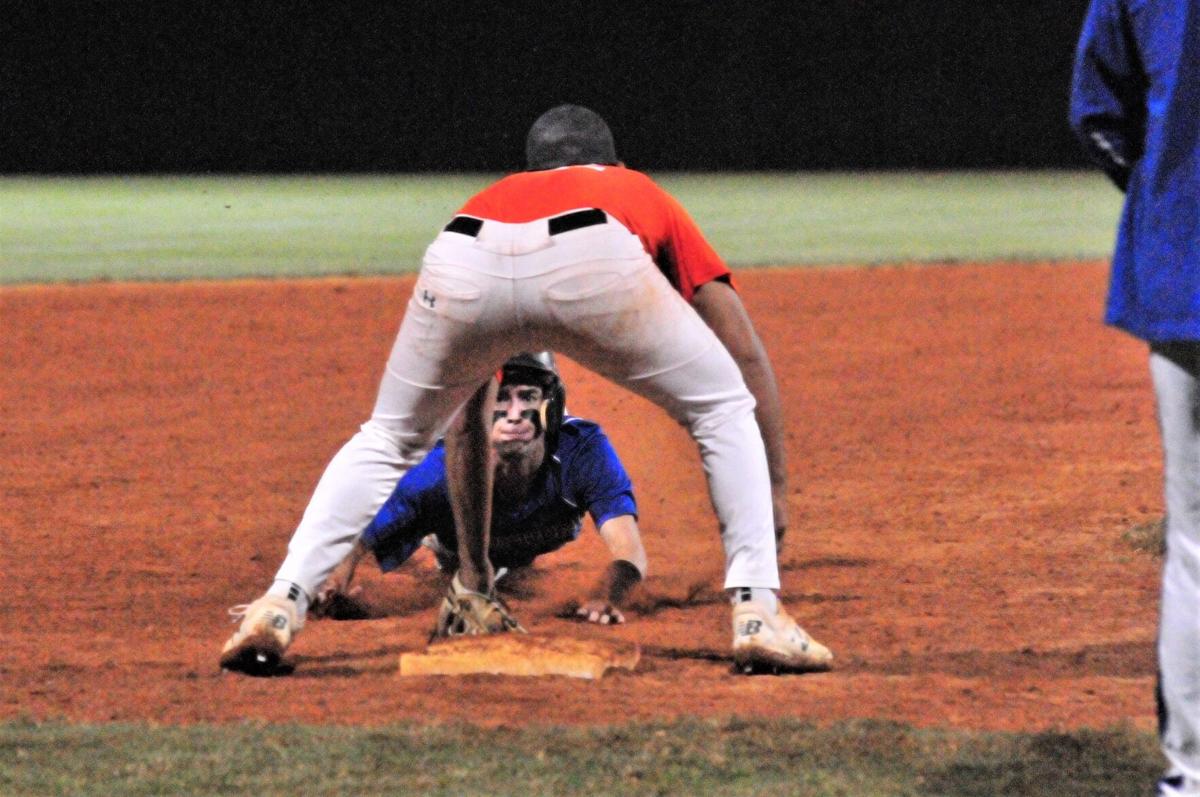 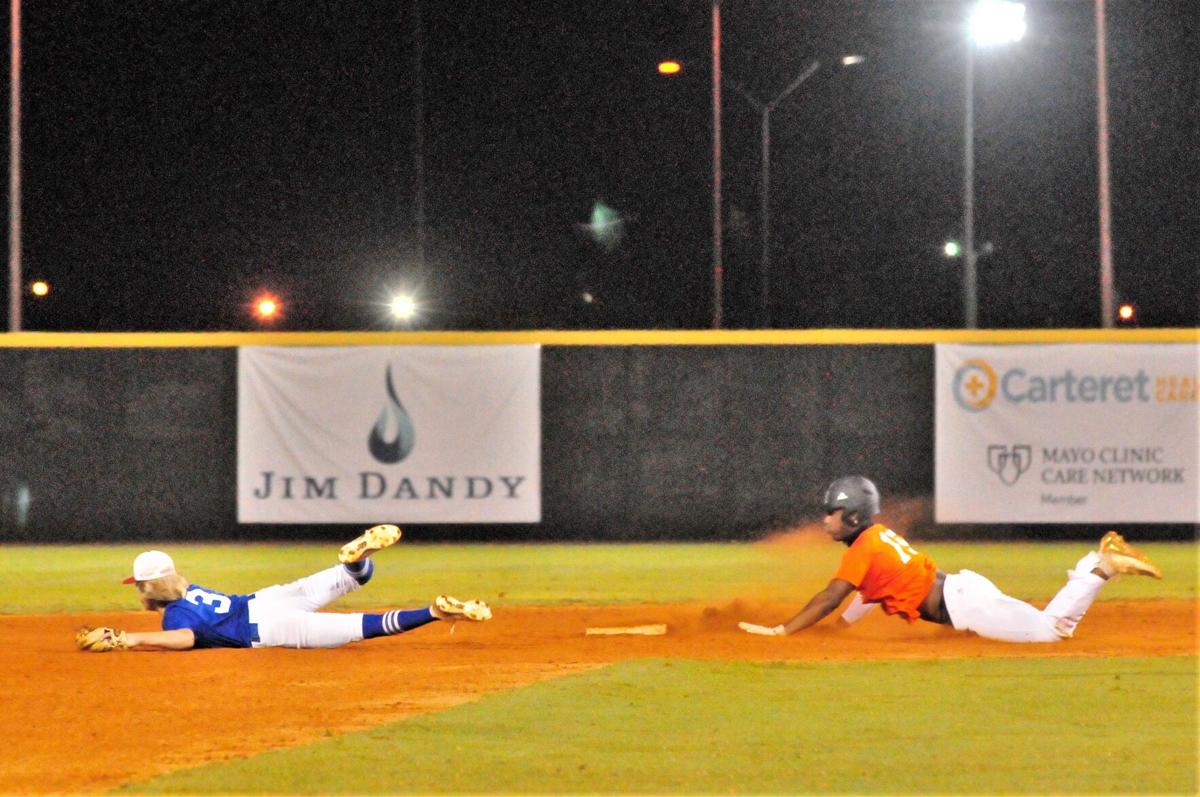 Andrew Frazier of Orange slides safely into second base Wednesday in the 13-10 loss to Royal Blue. Frazier hit 1-for-1 with two runs scored. (Zack Nally photo)

Andrew Frazier of Orange slides safely into second base Wednesday in the 13-10 loss to Royal Blue. Frazier hit 1-for-1 with two runs scored. (Zack Nally photo)

MOREHEAD CITY — The Royal Blue survived a late run from Orange on Wednesday to move to 4-2 in the Big Rock Fall Baseball season.

The visiting team at Big Rock Stadium held a 13-10 advantage after clearing bases in the name of sportsmanship in the top of the fourth inning. Orange clawed back to within three runs before falling short in the sixth inning.

“I thought we played well. We kept our head in the game for the most part,” Royal Blue coach Robby Lasater said.

Orange dropped to 0-4 with the loss. The team has only played two doubleheaders in the first three weeks of the season, playing Red first and Royal Blue second on both occasions. The team lost to Red 12-6 in the first game on Wednesday. Orange head coach Ryan McLendon was unavailable for comment after the game.

The Royal Blue offense got off to a hot start with five runs in the second inning. Brandon Conway and Gage Bohmuler were both hit by pitches to get the inning going, with pinch-runner Josh Mason scoring first on a Sam Hamlin single. Bohmuller scored on a double from Holden Hamlin that also scored his brother, Sam.

Holden Hamlin waited at the hot corner and Matt Lasater at first after getting hit by a pitch until Adam McIntosh roped a ball to left field and reached third on an error to score both runners and give his team a 5-1 lead.

Mason scored four runs for Royal Blue and stole six bases. The sophomore was expected to play a big role for his team, but he sustained an arm injury during football practice and is now limited in how he can contribute.

“It’s hard, but as long as I can help my team on the bases, I’m good,” Mason said. “I’m able to pitch sometimes too. It was a good night. We just need more groundballs and less errors. We’re going to have to straighten that up against the (undefeated) Black team.”

Royal Blue only led 6-4 going into the fourth inning. Then a series of three straight walks, a single from Holden Hamlin and a double from Bryson Willis brought four runners across the plate. Both coaches agreed to clear the bases and award three more runs to keep the pace of the game moving forward and preserve a sense of sportsmanship.

Down 13-4, Orange fought back in the bottom of the inning with four runs, also fueled by an abundance of walks. Three loaded the bases and a fourth scored leadoff hitter Chase Locklear. Bailey Finn scored on a wild pitch, and a Jacob Nelson triple scored Jaxon Lawrence and Hunter Mason.

Orange wasn’t able to close the three-run gap in the final at-bat in the bottom of the sixth inning, but it earned the chance to do that with an impressive defensive stand in the top of the frame.

McAnallen loaded the bases with walks, but he buckled down with two strikeouts and a short grounder allowed that he fielded and tossed it to catcher Hunter Sinsel for the out at the plate. The runner, however, Holden Hamlin, plowed through Sinsel, sending the catcher to the ground and stopping play.

After the game, player safety was emphasized by both coaches in their team huddles.