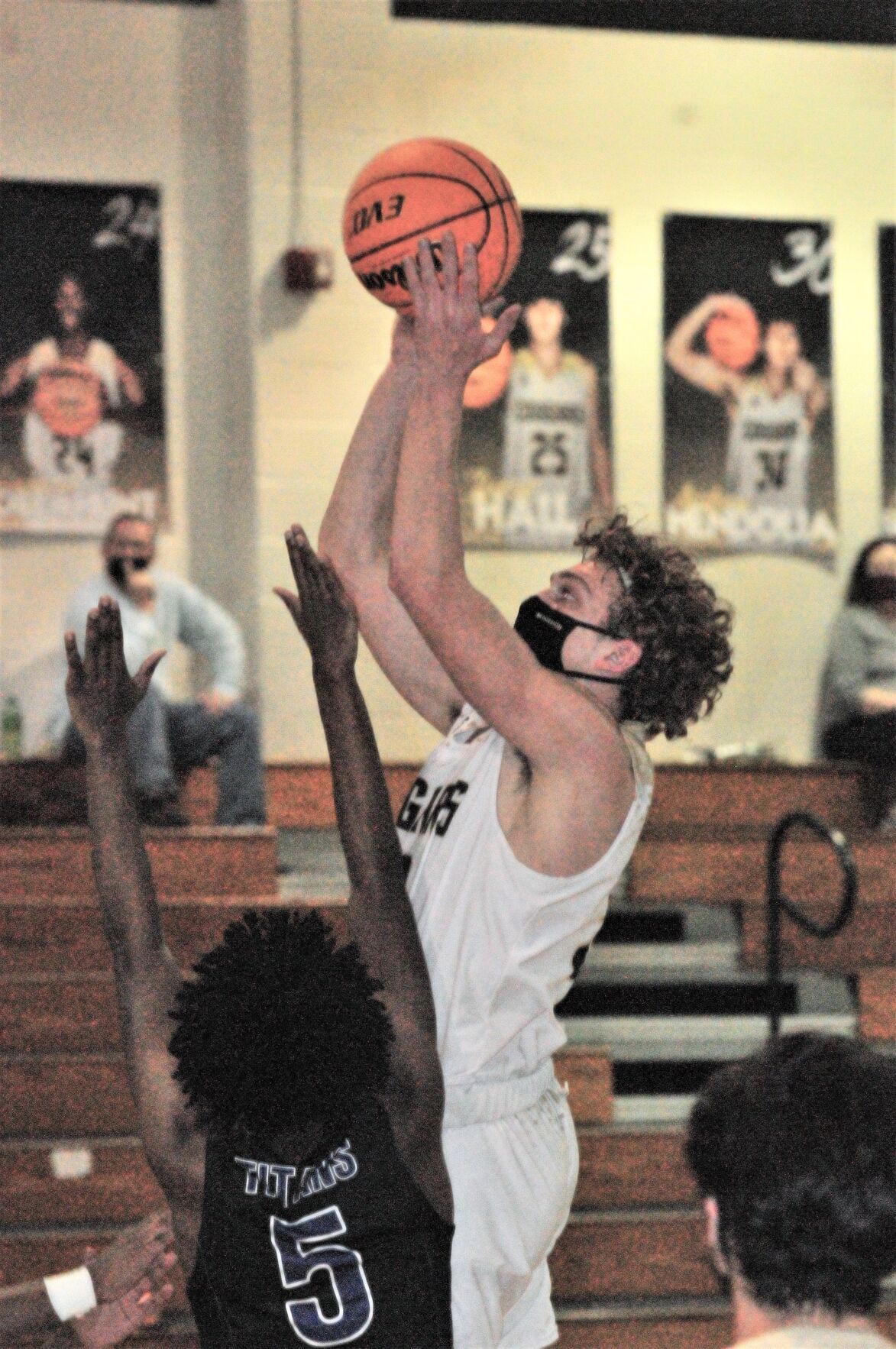 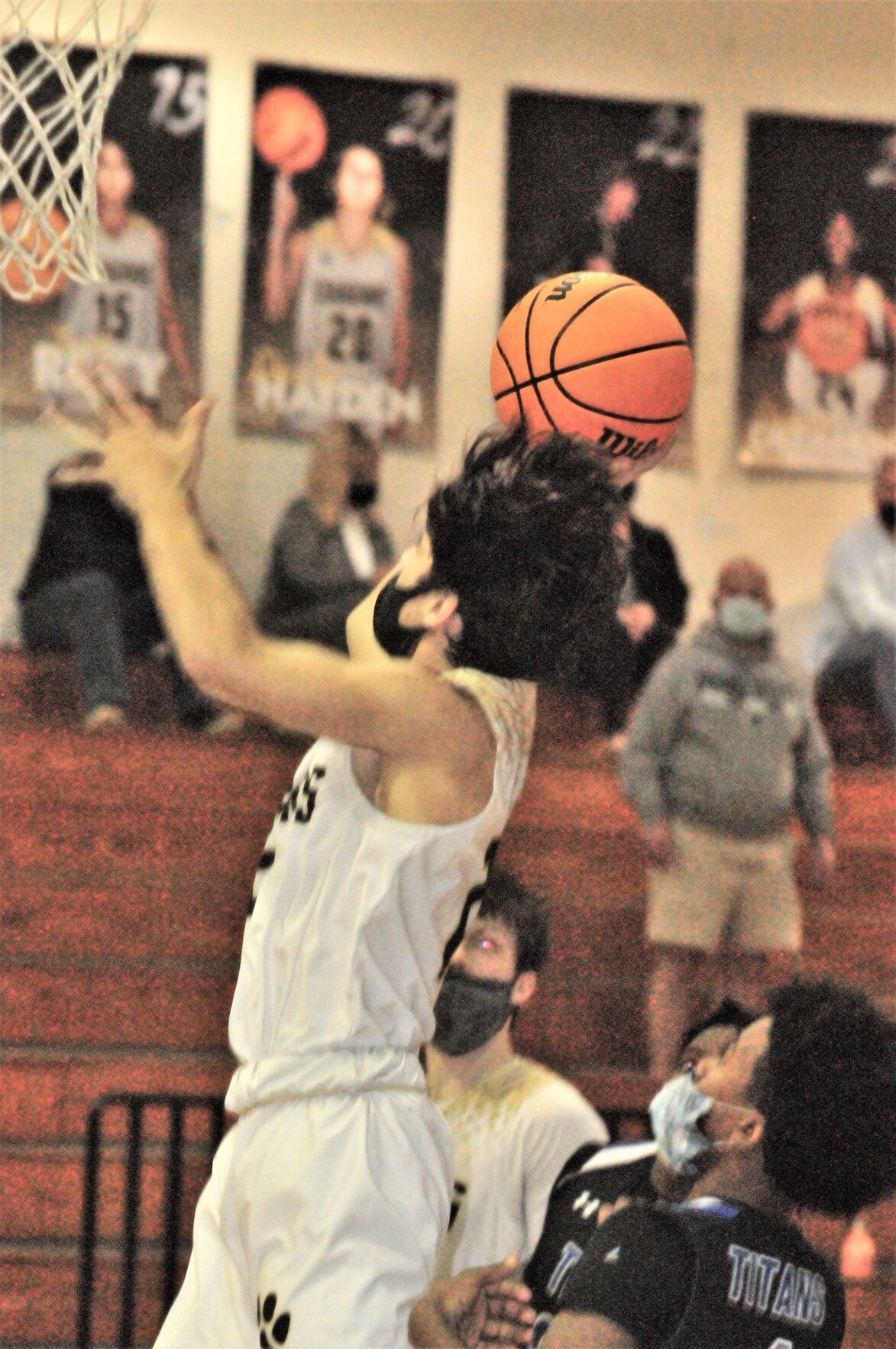 The Cougars’ Jack Riley flies to the basket for two of his seven points Thursday in the win over Heide Trask. (Zack Nally photo)

The Cougars’ Jack Riley flies to the basket for two of his seven points Thursday in the win over Heide Trask. (Zack Nally photo)

OCEAN — Croatan hustled out a 56-49 win over Heide Trask Thursday to keep its 2A state playoffs hopes alive.

The win gave Croatan (6-3 overall, 6-2 conference) an edge over Trask (4-2) in the 1A/2A Coastal 8 Conference standings and set up a pivotal game at Pender on Tuesday.

“We’re fighting for that 2A spot in the conference, so every win counts big,” Croatan coach Will Sutton said. “(Pender) is a huge game, and it’s on the road. We still have to get past Richlands (on Friday), which is no guarantee. It’s a fight every night. You have to bring your best game every night.”

East Carteret owns first place in the league at 9-0, but it is a 1A program, opening the door for Croatan to get the top 2A seed for the playoffs. The Cougars haven’t been in a position to reach the playoffs since the 2012-2013 season when they reached the third round.

“It feels great,” Croatan forward Andrew Mendolia said. “There’s nothing like winning. It’s all the fun in the world, especially in your senior year. I’ve been playing basketball with these guys for six or seven years. They’re my brothers.”

Mendolia was one of eight seniors honored during a senior night celebration before the boys game. He also topped his team’s scoresheet with 13 points, utilizing his strength around the rim and speed on the baseline to skillfully carve up Trask’s defense.

“I felt pretty good about the game,” he said. “We were motivated to not go into this game like we did against Southwest (Onslow), where we thought we were guaranteed a win. No wins are guaranteed in this conference. Everyone is pretty neck and neck. We came out and left everything on the floor with senior night. You never know when your last game is with COVID and stuff going on, so it’s now or never.”

The Cougars led in double figures throughout most of the fourth quarter until Trask turned to the deep ball and started launching three-point attempts. Some of them landed, leading to a manageable 50-45 deficit with less than a minute to play.

Turning to fouls, Trask tried to trim the lead even more, but Croatan went 10-of-15 from the charity stripe in the final period.

“They played better than we did tonight,” Trask coach Rodney Orr said. “They had a good game plan, and they played well. Hats off to them, they played hard. We didn’t stop fighting. It was a 13-point game at one point, and then it was down to five. That’s all you can ask for.”

The Titans went into quarantine for two weeks after a game with Dixon. They exited it earlier this week, forced to play back-to-back games with a four-point win over Richlands on Wednesday. Still, the Croatan victory was an impressive one considering Trask’s 76-54 victory over the Cougars in their first meeting on Jan. 15.

“It was tough that first game,” Mendolia said. “We had 30-plus turnovers, so we knew we had to clean it up. We had nothing but practice the last week and a half, so we put a lot of work in. Coach Sutton did a good job preparing us.”

The Cougars had 10 players on the scoresheet by the game’s end, with Eric Nutz tallying nine points, Brent Eilertson and Jack Riley scoring seven apiece and Dustin Hayden and Daquan Dillahunt getting six apiece.

The real difference in the game was hustle, an area Croatan dominated, between chasing down loose balls, banging the boards for defensive rebounds and forcing steals in the half-court defense.

“They played about as hard as they could,” Sutton said. “They played with a lot of heart and a lot of brains, I can’t ask for more. This group is a joy to coach, and they love this game of basketball. Sometimes we don’t shoot the ball well tonight, but if you can hustle like they did tonight, you have a great chance of winning the game even when those shots don’t fall.”