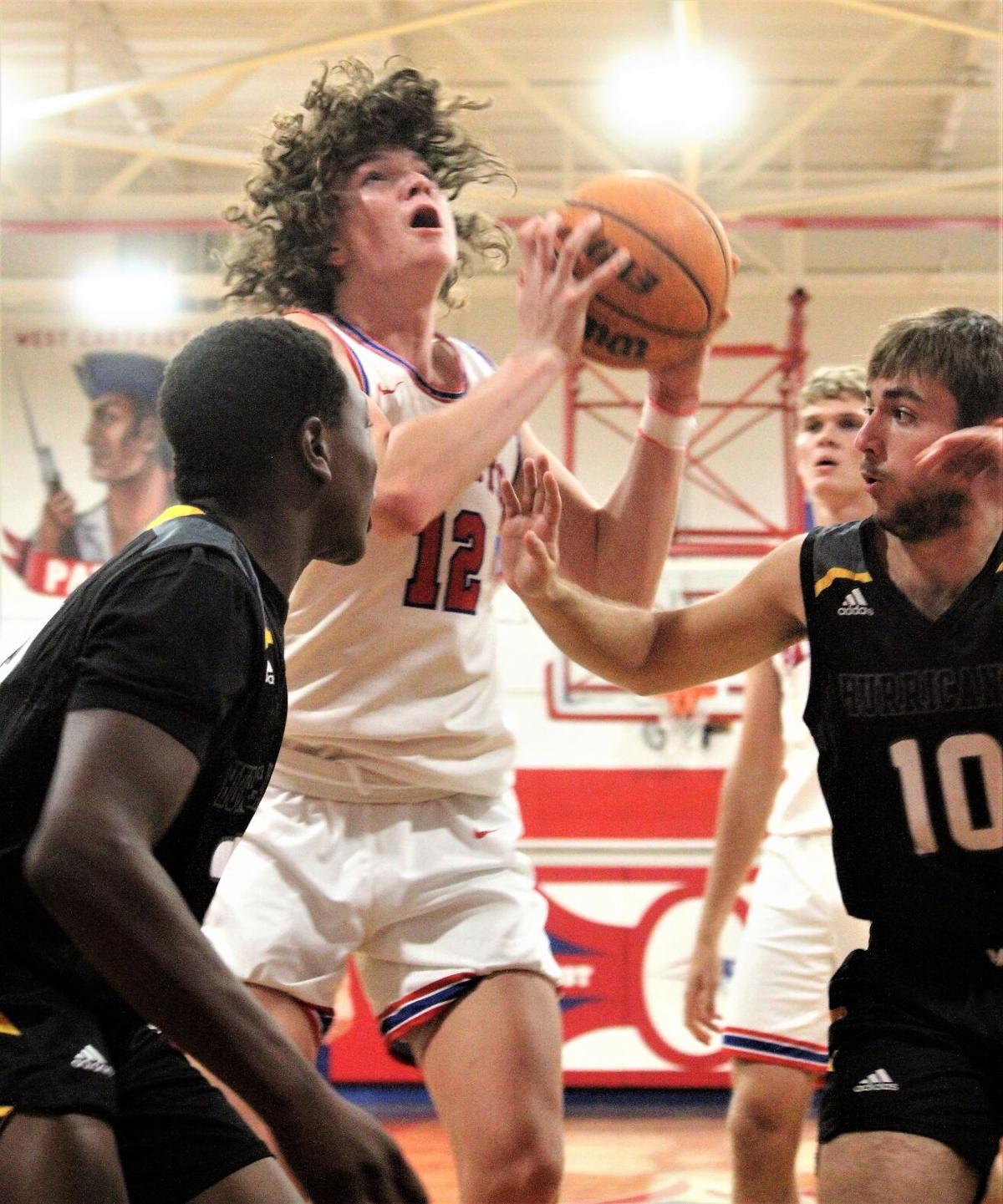 West Carteret senior Jaxon Ellingsworth has a chance to be the third Patriot ever to win three conference championships with the varsity team. The Patriots are also gunning for a program-first fourth straight league title. (Zack Nally photo) 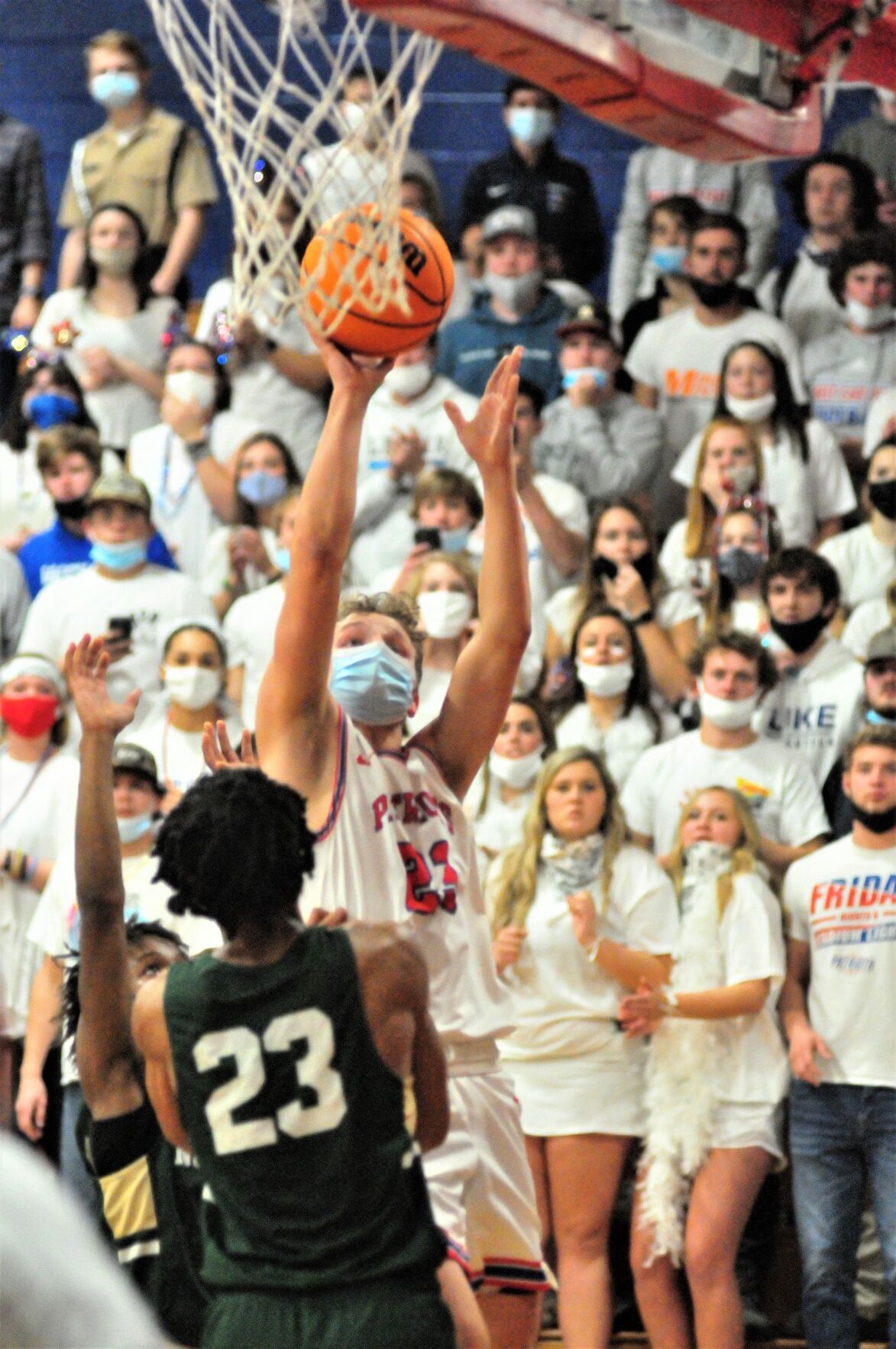 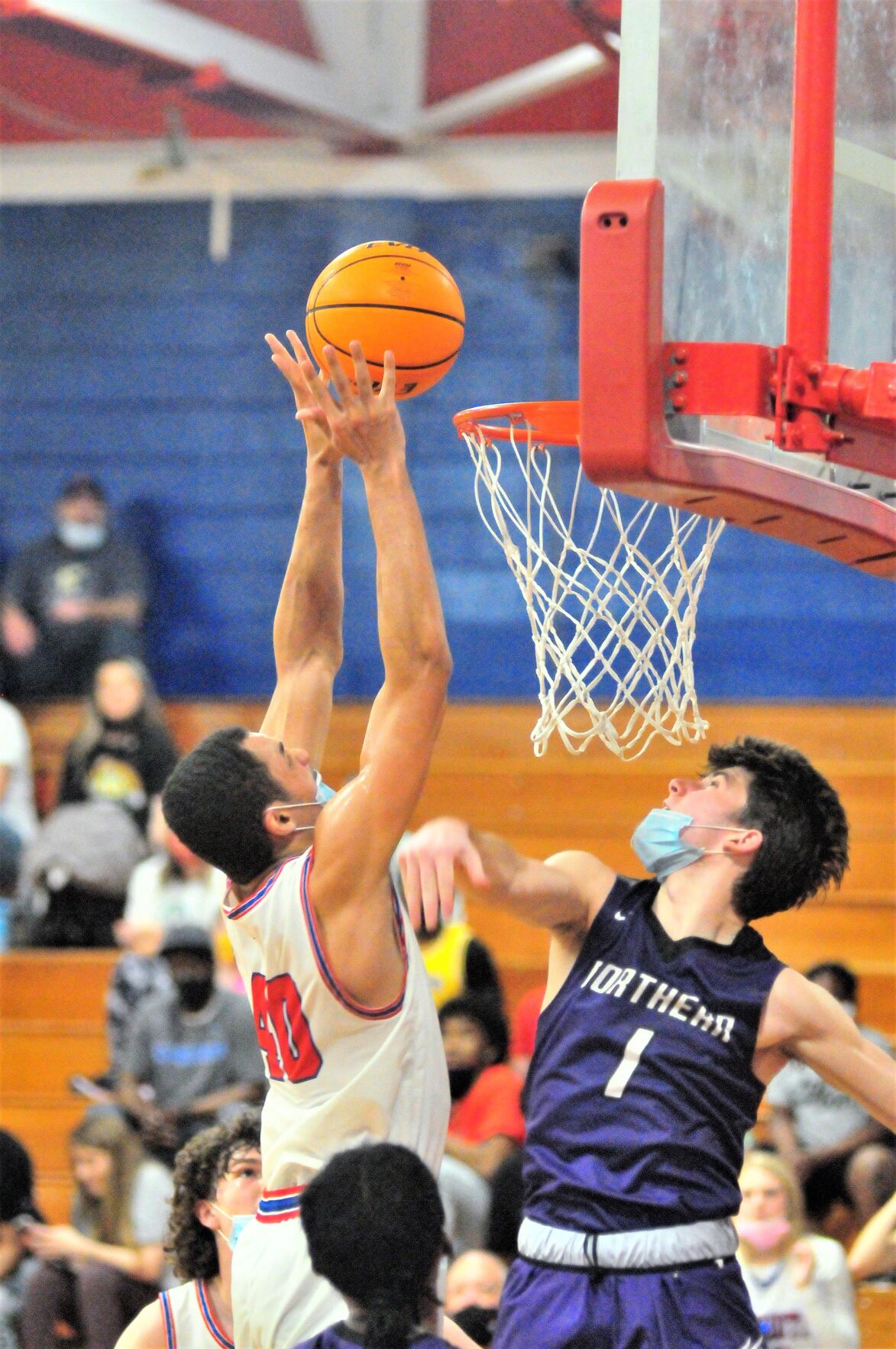 West Carteret alum James Kenon is a three-time conference champion for the Patriots, one of just two ever. He helped the program reach the regional finals as a senior last year. (Zack Nally photo)

West Carteret senior Jaxon Ellingsworth has a chance to be the third Patriot ever to win three conference championships with the varsity team. The Patriots are also gunning for a program-first fourth straight league title. (Zack Nally photo)

West Carteret alum James Kenon is a three-time conference champion for the Patriots, one of just two ever. He helped the program reach the regional finals as a senior last year. (Zack Nally photo)

MOREHEAD CITY — A state championship is on the top of the West Carteret boys basketball team’s list, but there is another distinction that could be in play this season.

If the Patriots win the 3A Coastal Conference championship this season, it will be the first time in school history the program has won four straight league titles.

“It has been a really special time the last three years,” Mansfield said. “We have gotten better each year, too. This year we were able to start the season knowing we could realistically win a state championship. The program is clicking right now.”

West won the first championship of this run in 2018-2019 under the late head coach Craig McClanahan. Since then, the team has won two more in a row, going 10-0 each of the last two seasons.

Realignment in the offseason shuffled a few teams around. Jacksonville, Havelock and Northside-Jacksonville are out, and in their place are Richlands, Dixon and Croatan. White Oak and Swansboro remained in the conference.

With so much change, Mansfield isn’t making any assurances for a fourth title.

“I’m optimistic, but there are no guarantees,” he said. “Anyone can be beat on any night. We’ve been there the last three years, but now we have realignment, so it’s anyone’s guess.”

The focal point of the team’s push for a fourth straight championship is Jaxon Ellingsworth, a 6-8 senior leading the team in scoring and rebounds for the second straight season.

He was there last year to help the team outscore its conference opponents by double digits night in and night out. West averaged a 66-54 advantage over 10 league games.

This season, seeing perennial powerhouses like Northside and Jacksonville leave the conference has him and his teammates feeling self-assured.

“I think our locker room is pretty confident right now,” Ellingsworth said. “Realignment made things a little easier, to be honest. I haven’t seen every team, so I’m not positive, but I believe in this team’s ability to get another (conference title).”

Ellingsworth has a chance to do something notable himself. He could become the third Patriot ever to win three conference championships as a varsity player. He would join 2021 graduates Gavin Gillikin and James Kenon.

“It’s pretty crazy,” Ellingsworth said. “There have been a lot of good teams and players to come through the school. I just feel lucky. The conferences back then were a little stronger, but we’ve played strong too.”

Ellingsworth has only held a starring role the last two seasons. He was on the jayvee team as a freshman and played limited minutes as a sophomore during West’s second straight conference title.

He averaged 21.1 points, 10.1 rebounds and 2.1 blocks per game as a junior, earning conference Player of the Year and Carteret County News-Times Player of the Year. As a sophomore, he averaged 3.8 points and 2.7 boards per game. So far this season, the forward has put up half a dozen games with 30-plus points.

“I didn’t get a ton of time on the court as a sophomore, but last year was a breakout season, and I’m hoping this year will be the best one,” Ellingsworth said. “Like all my teammates, I want to win a state championship. That’s the big goal.”

The Patriots started their run toward a fourth straight conference title on Friday at Croatan. This edition was published before results were in. They’ll host Swansboro (13-0) on Tuesday in a game with serious implications.

“This is a really talented team,” Ellingsworth said. “And when we play as a team, it’s really special. That’s why last year’s team went so far, because we played unselfish, team ball. We just have to keep doing that this year and we’re going to have success.”

Five years ago, the idea that West could win four straight conference championships was kind of laughable. The program hadn’t won a title in 33 years heading into the 2018-2019 season.

Kenon and Gillikin were sophomores then on the varsity team but only playing limited minutes. That didn’t take away from the significance of the moment. The Patriots cemented their title that season with a 51-50 tilt at home against Northside-Jacksonville.

“It’s not something you really forget,” Gillikin said. “James and I didn’t play much that season, but you still saw how much it meant to McClanahan and the fans. It was an incredible night.”

That 2018-2019 West team finished 8-2 in the conference and 19-6 overall. It lost in the final of the conference tournament and bowed out of the playoffs in the first round.

The Patriots ranked No. 43 in the 3A by MaxPreps.com that year. They beat out No. 45 White Oak (21-6 overall) and No. 54 Northside-Jacksonville (15-8) for the conference win. The Monarchs were coming off a 29-1 season and their fourth straight league title.

That season, Gillikin averaged 6.1 points and 2.0 rebounds per game. As a junior the next year, he averaged 8.0 points and 2.5 rebounds. The Patriots, under Mansfield as their new head coach, finished 21-5 overall and 10-0 in the conference. They reached the second round of the state tournament, as well.

After the team graduated all three of its top scorers, Gillikin remembers the perspective the rest of the conference had of West.

“There were a lot of people that thought we wouldn’t be able to do the same thing without J.J. (Williams) and a few of the other guys who graduated,” he said. “They really looked down on us. I’m glad we had a chance to prove them wrong.”

The Patriots finished last season ranked No. 2 in the 3A and reached the regional finals of a shortened postseason, losing to Northwood 72-69 in overtime.

“It’s a season I’ll never forget,” Gillikin said. “I still think about it all the time. I’m just grateful that I still get to be around the game.”

Gillikin is the assistant boys basketball coach at Morehead City Middle School. He tries to attend as many West games as he can, like Kenon, who was at the West gym on Tuesday when the Patriots beat Havelock 52-40. He knows conference titles are old hat now, but he’s hoping for a fourth one like everyone else.

“I feel like we’re all really used to it by now, but it’s still cool to see them keep winning,” he said. “I still have my trophy in my case at home. It means a lot.”

Kenon hasn’t played as often as he’d like since graduating, but he’s enjoying being part of the alumni that attend the games, still getting love for the recent seasons passed.

“I don’t recognize everyone out here, but I’m still rooting for them all the way,” Kenon said. “I’m a fan for life.”