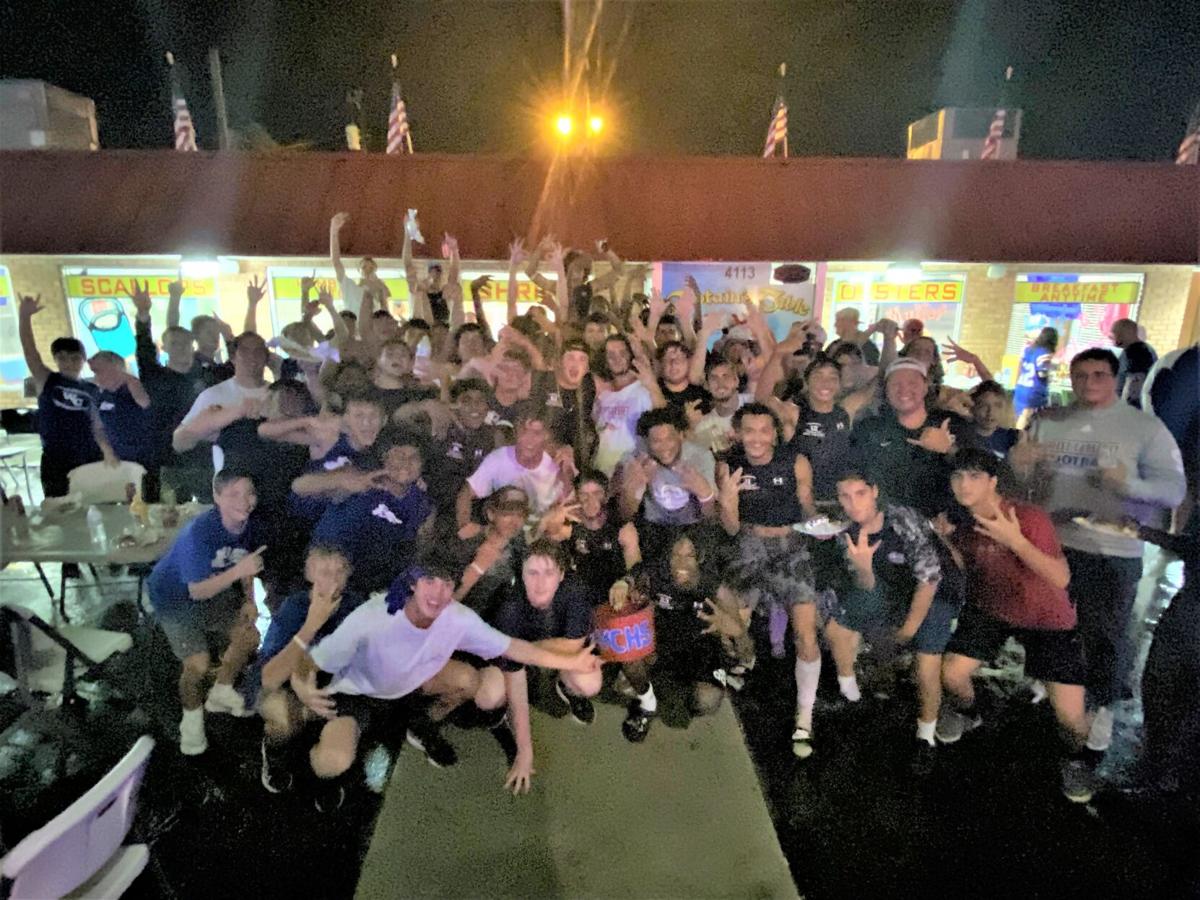 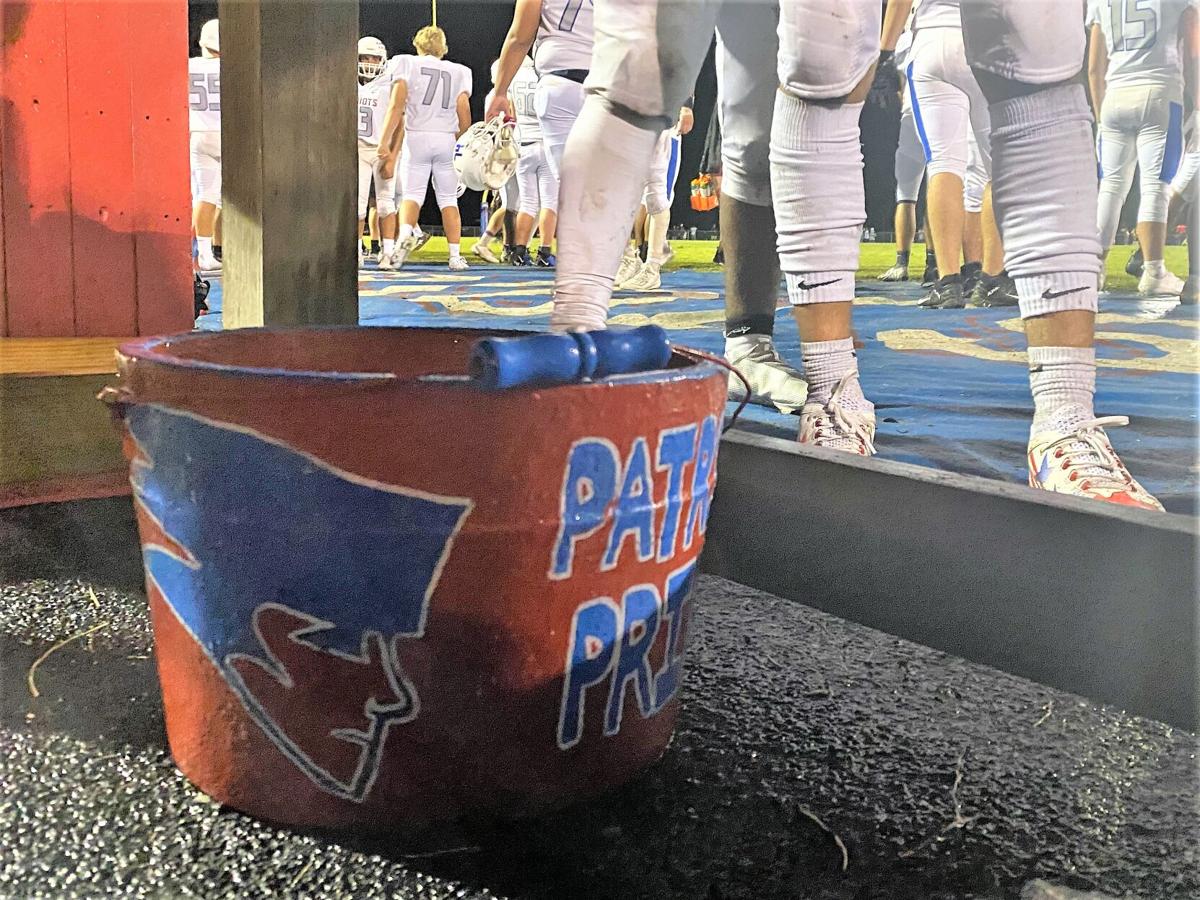 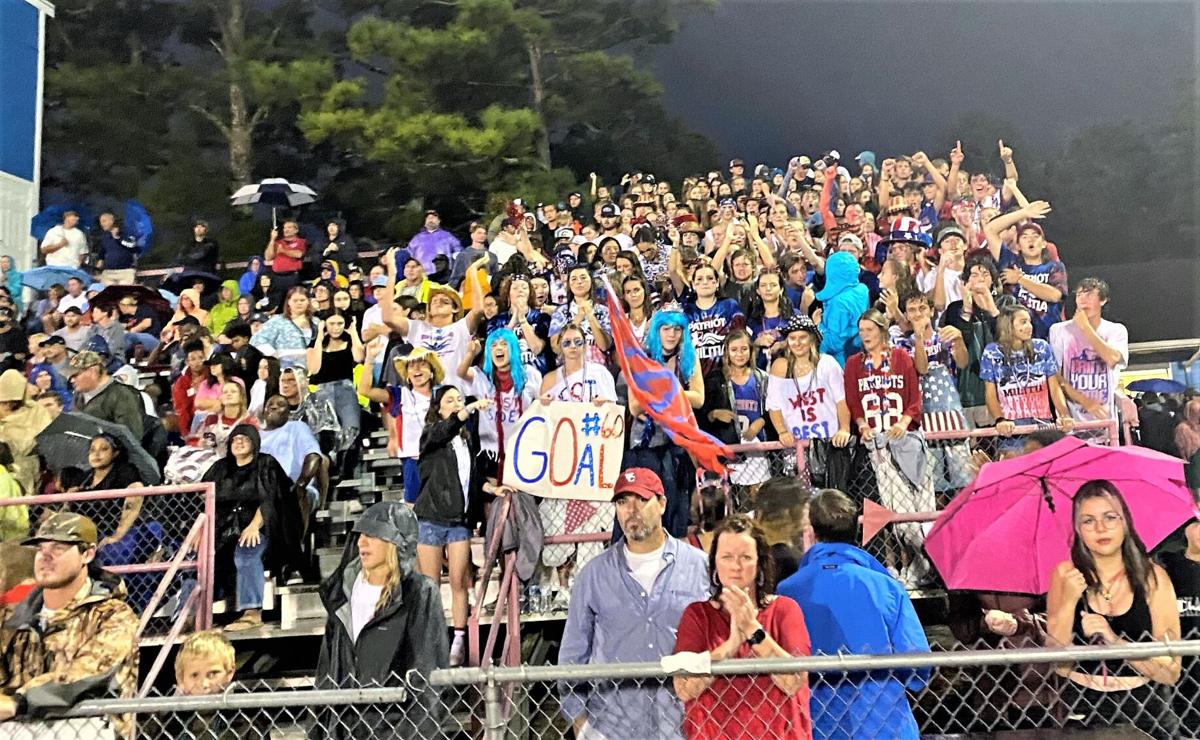 The Patriot Militia was loud on Friday in support of West’s 33-0 win over East. (Zack Nally photo) 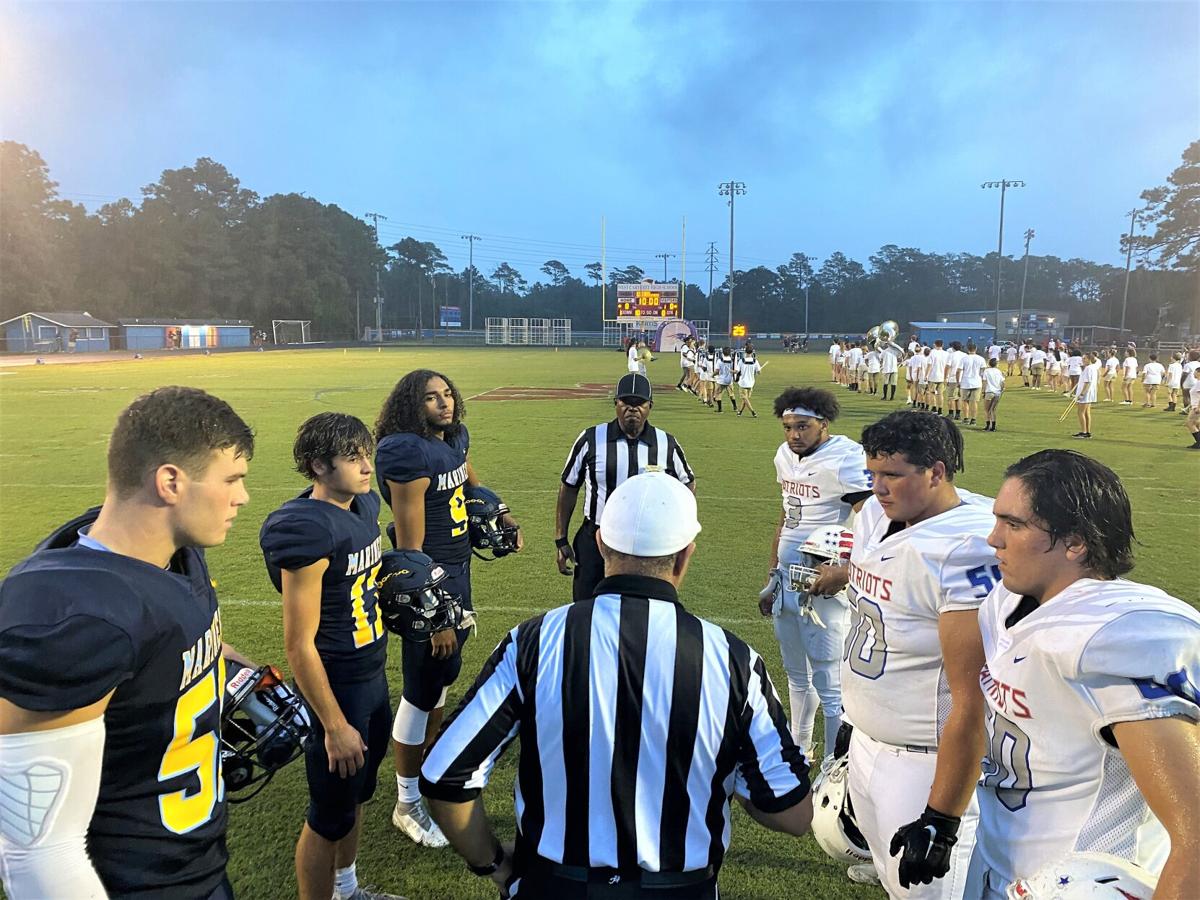 The team captains for West and East meet at midfield before the 56th annual Mullet Bucket on Friday. Those in the photo are, left to right, East’s Aiden Hollingsworth, Cameron Eakes and Miguel Bassotto, and West’s Shayne Hester, Dalton Ovando and Al Morris. Not shown is West captain Jamarion Montford. (Zack Nally photo) 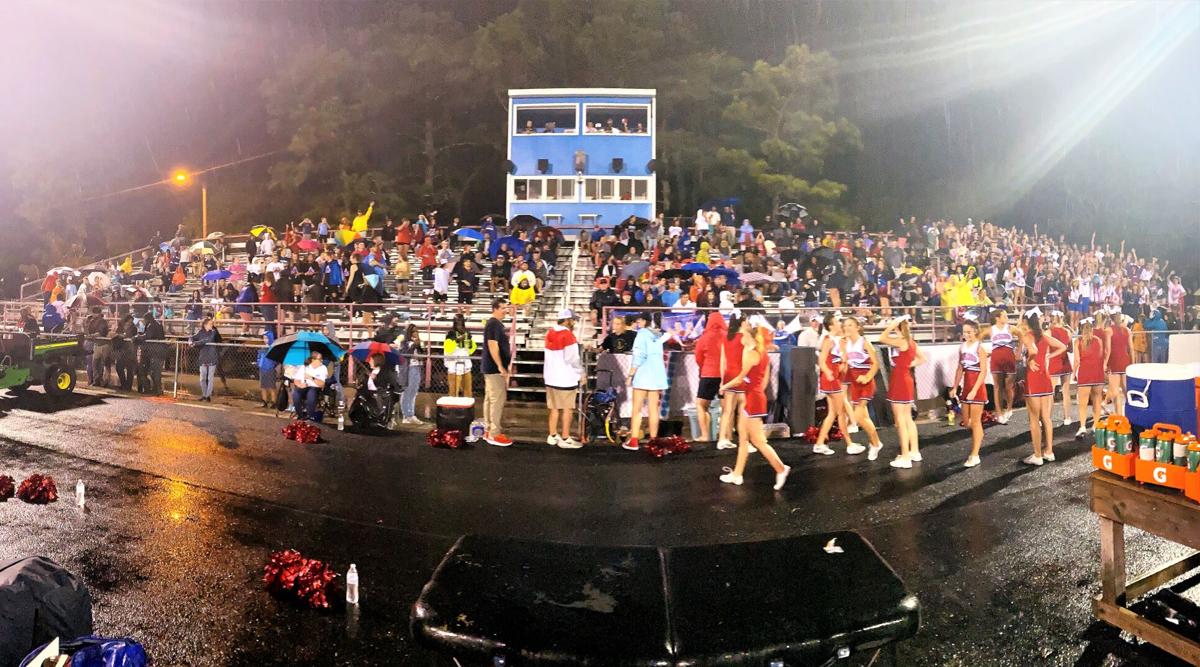 The crowd on the West side of the 56th Mullet Bucket used umbrellas and raincoats to fend off rainy conditions all night on Friday. (Zack Nally photo) 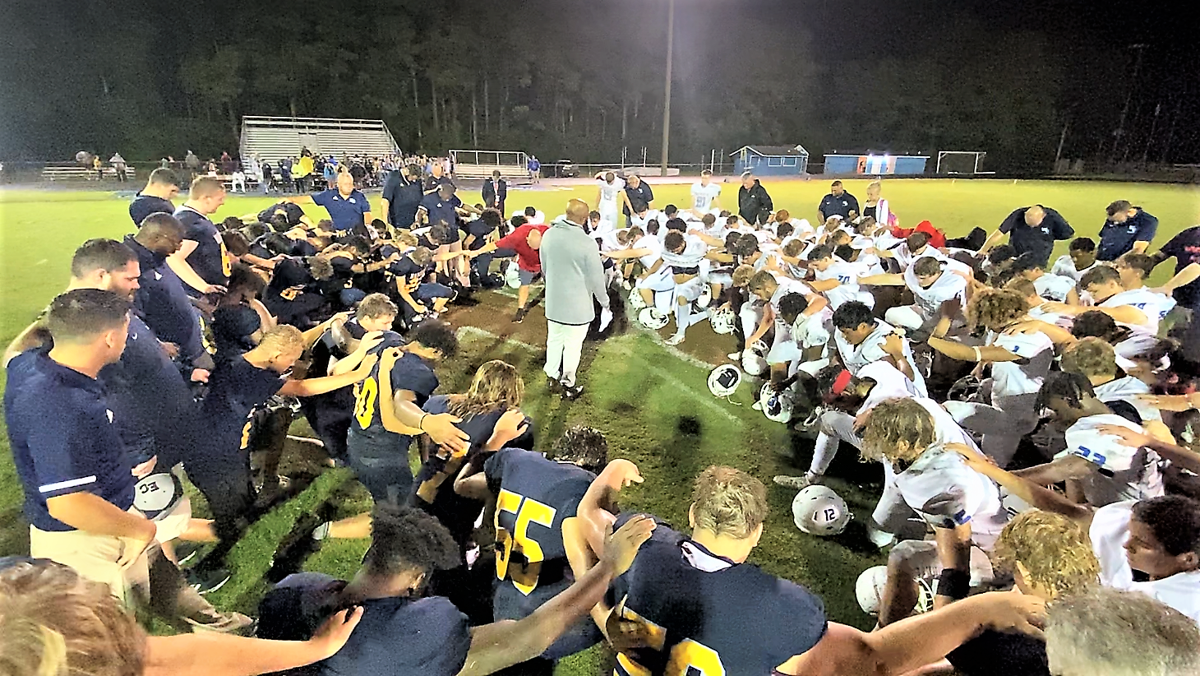 The players for East and West bow their heads in a prayer led by Lee Stiles. The after-game prayer was organized by Waylon Bell. (Zack Nally photo) 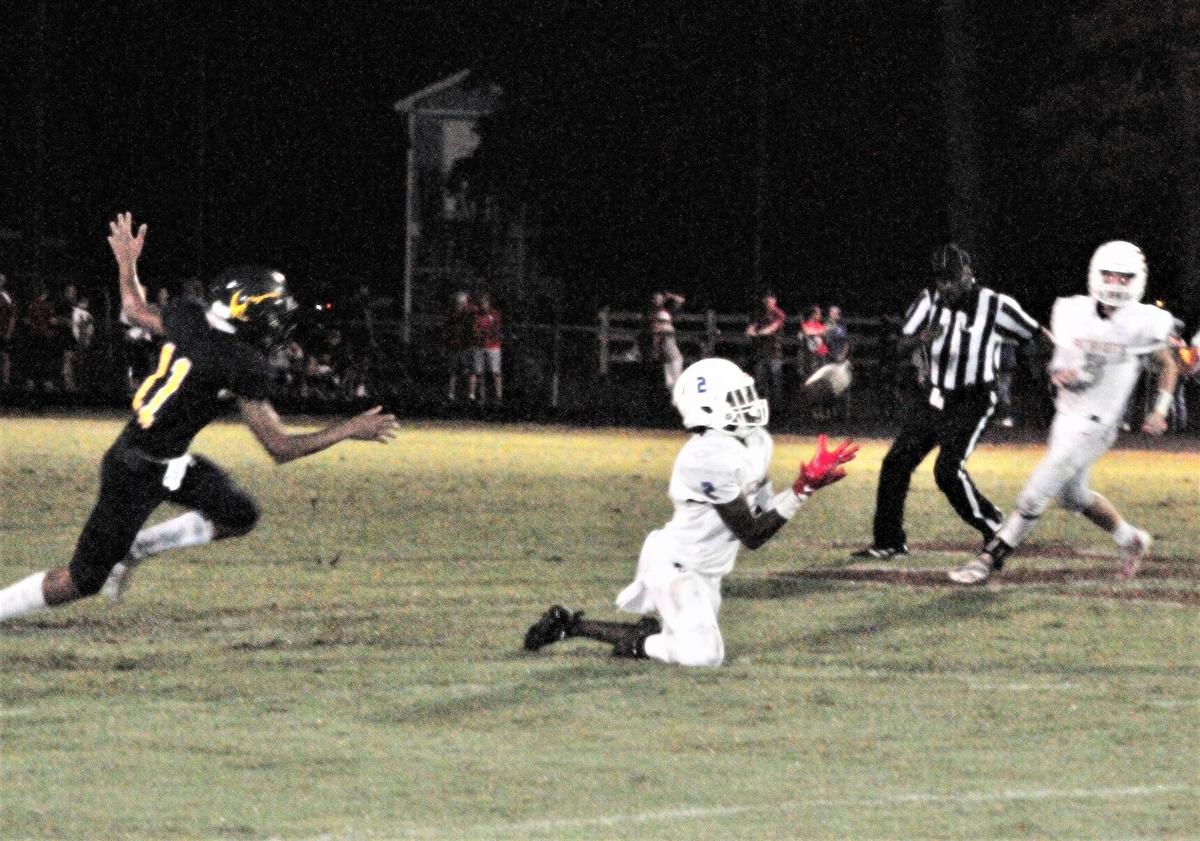 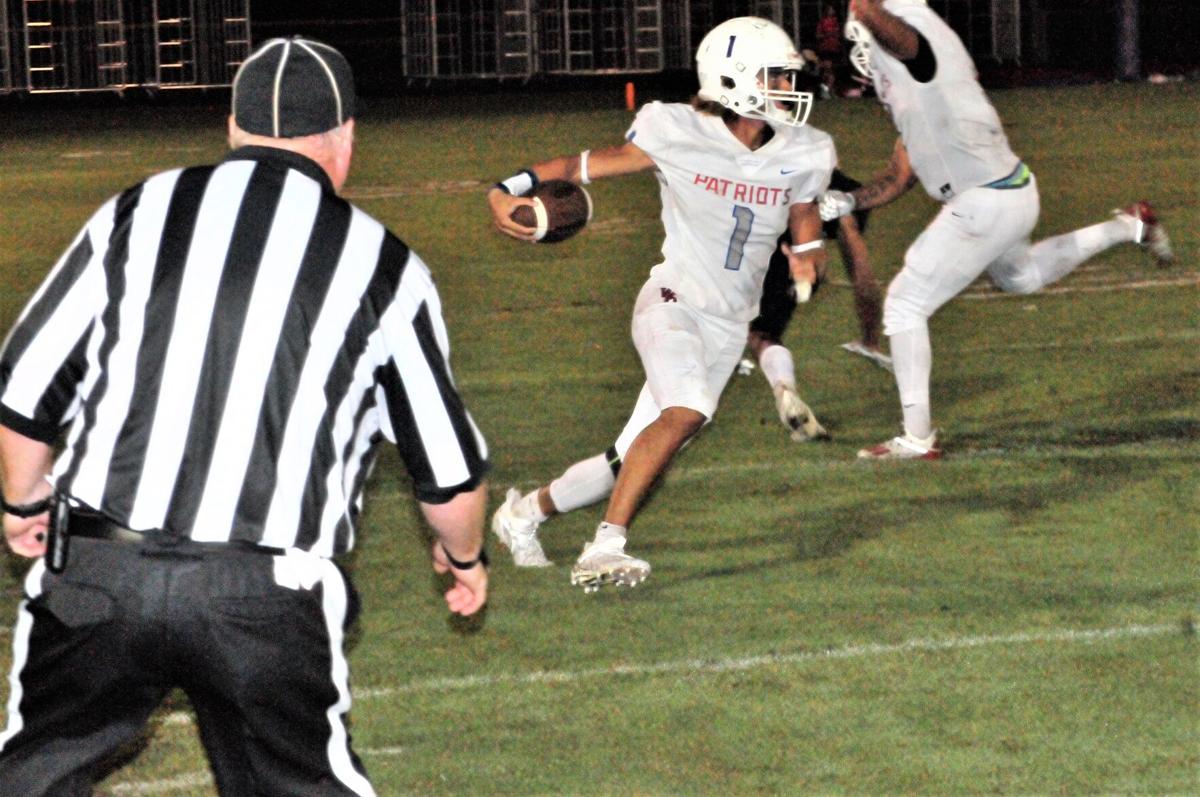 The Patriots’ Lamar Teel rips off a 28-yard run Friday in the win over the Mariners. (Zack Nally photo)

The Patriot Militia was loud on Friday in support of West’s 33-0 win over East. (Zack Nally photo)

The team captains for West and East meet at midfield before the 56th annual Mullet Bucket on Friday. Those in the photo are, left to right, East’s Aiden Hollingsworth, Cameron Eakes and Miguel Bassotto, and West’s Shayne Hester, Dalton Ovando and Al Morris. Not shown is West captain Jamarion Montford. (Zack Nally photo)

The crowd on the West side of the 56th Mullet Bucket used umbrellas and raincoats to fend off rainy conditions all night on Friday. (Zack Nally photo)

The players for East and West bow their heads in a prayer led by Lee Stiles. The after-game prayer was organized by Waylon Bell. (Zack Nally photo)

The Patriots’ Lamar Teel rips off a 28-yard run Friday in the win over the Mariners. (Zack Nally photo)

The bucket is repainted every time it changes hands, but for the first time since 2017, the rivalry icon started and ended game day on the western side of the high-rise bridge.

After the game, West coach Daniel Barrow carried the bucket into a raucous waiting crowd of players and diehard members of the “Patriot Militia” student fan section. It was a vivid image of a football season reveling in normalcy after the game didn’t take place last season.

“This matters so much,” he said. “It’s not just a game. It’s so important to everyone. Our student section realizes the valuable part they play. They worked for this win, too.”

The 56th meeting between the two high schools was wet, sloppy and riddled with mistakes. Offense was nearly nonexistent for both sides save for a handful of splash plays from Patriot playmakers.

Seven runners combined finished with negative yardage, and the two teams fumbled 11 total times. West didn’t produce a first down until the 4:50 mark of the first quarter and East didn’t until 4:36 left in the second.

“I’m happy to get the win,” West coach Daniel Barrow said, “especially in a game like this, but it was a sloppy night for both teams. I know I wasn’t extremely happy with our offensive execution, I’m sure coach (B.J.) Frazier won’t be happy with his team’s either. I think weather played a role for sure.”

Rain pelted the field from the opening kickoff until the final whistle. Bad snaps hit the grass over and over, runners couldn’t get a foothold, and receivers couldn’t hold on to catches. The first half was particularly bad with the Patriots only producing 156 yards of offense – 81 of which came on two plays – and the Mariners 58.

“We couldn’t get anything going on offense,” East coach B.J. Frazier said. “We couldn’t find any rhythm. We’re running a new two-quarterback system, and we’re still adjusting to life without Adam McIntosh in the backfield.”

The Mariners certainly looked rudderless without their senior quarterback taking snaps. McIntosh tore his ACL and his MCL three weeks before this game, giving East little time to plug in a replacement and find a new offensive strategy.

On the other end of the field, West quarterback Jamarion Montford got the lion’s share of his 242 total yards of offense on the ground. He carried the ball eight times for 176 yards and scored the final touchdown of the game, a 99-yarder that took everyone in the stadium by surprise.

The score came after West was leading 26-0, prompting Barrow to sub in his jayvee offense, which hadn’t played the night before due to East no longer having enough healthy players to field a jayvee team.

The younger Patriot unit responded horribly, going 30 yards in the wrong direction before the head coach put his varsity starters back in facing a third-and-40 on West’s own 1-yard line.

Barrow called a quarterback sneak for Montford, and the signal-caller found a seam down the left side and took it all the way to the house with six minutes and change left in the fourth quarter.

“I was hoping just to get a few yards to punt,” Barrow said. “I really didn’t want to score there. We ran a quarterback sneak from our own 1-yard line. But it is what it is.”

The Patriots finished with 299 rushing yards, including 112 yards on 11 carries from Josh Mason who opened the game with an electrifying 53-yard touchdown run. His score was set up by a Patriot kickoff recovery.

“That was a back-breaker,” Frazier said. “We worked this week on stopping that counter play, and we just didn’t execute.”

Mason scored again in the third quarter on an 11-yard run set up by an Xavier Jones fumble recovery.

Javaris Miller caught a 28-yard touchdown pass from Montford in the second quarter on the first play of a drive set up by a short punt from East. Other big plays in the game were a 29-yard throw from Montford to Justice Dadeel, a 28-yard run from Lamar Teel and a 13-yard touchdown run from Spencer Maxwell at the start of the fourth quarter.

Maxwell also had a stellar 40-yard touchdown catch in the first quarter that got negated by an illegal man downfield penalty.

“We had contributions from everyone tonight,” Barrow said. “I have to give a big shoutout to our offensive line, too. They really paved the way. I thought they had their best game.”

The Mariners turned to Miguel Bassotto to carry the offensive load for most of the game. The senior running back faced an uphill task with West able to key in on a mostly one-dimensional offensive strategy. Bassotto took direct snaps from under center and lined up behind backup quarterback Darren Piner to finish with 21 carries for 73 yards.

Backup quarterback turned starter Darren Piner had an up-and-down night with two completions and two interceptions. He was hounded all night by the Patriot defense and struggled to get a good grip on the ball in the wet conditions.

“It was his first varsity game as a starting quarterback,” Frazier said. “West was bringing a lot of pressure, and the ball was slippery. It was a tough assignment for him. (West’s) defense did a good job game planning against us.”

Piner’s best pass of the night was a 34-yarder to Cody Shepard in the first quarter. That set up East’s best scoring opportunity of the game and a chance to tie the game. The Mariners actually fumbled twice on the seven-play drive, but recovered both to reach all the way to the Patriot 1-yard line. The second fumble backed the offense up to the 3, and the offensive line couldn’t create a hole for Bassotto to reach the end zone.

“I think if we had scored on that drive, that would have helped a lot,” Frazier said. “Darren had a good pass, but we just couldn’t finish.”

The Patriot passing offense was not very productive either, with Montford throwing for just 66 yards on eight passes and tossing an interception hauled in by East’s Shaun Gagnon.

“The defense actually played pretty good at times,” Frazier said. “I was impressed with some of the plays in the first half. Obviously, there is still a lot of work to do.”

After the game, the Patriots traveled to the Captain’s Table in Morehead City for celebratory burgers and fries. The after-game tradition is held at a nearby restaurant every year for the winning team.

East’s next game will be at home against Croatan on Friday.

West is currently scheduled to take a bye week on Friday.