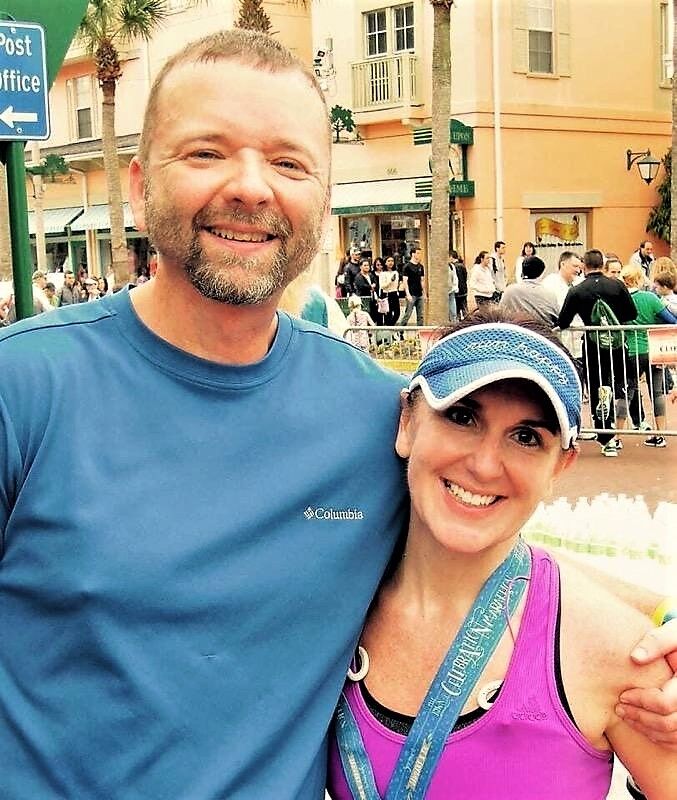 Duran Smith, left, and Kimberly Hollifield-Smith, married since 2011, have battled together since Duran suffered a massive stroke last year. The ultra-running pair are poised to return to their adventurous ways. (Contributed photo) 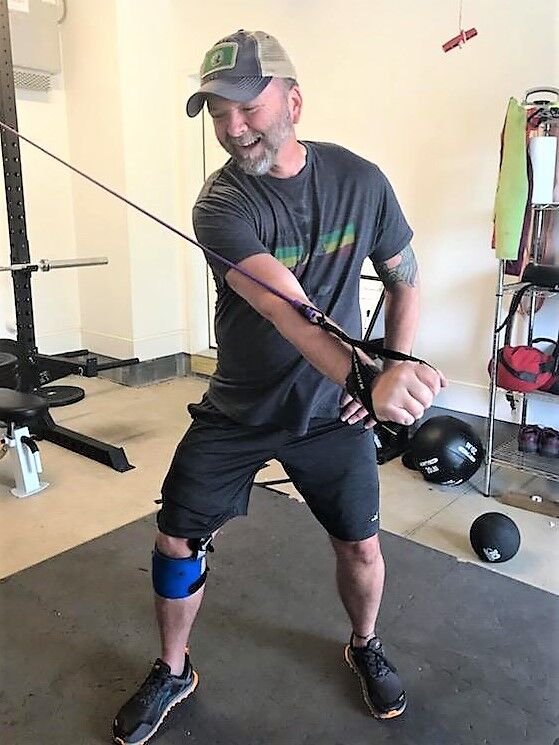 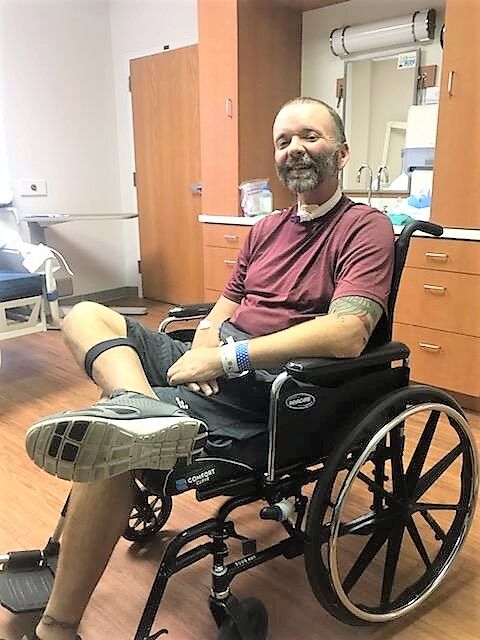 Duran Smith of Newport leaves the hospital in a wheelchair after his stroke last year. At the one-year mark, Smith is walking without a cane and inching his way back to an ultra-running lifestyle. (Contributed photo)

Duran Smith, left, and Kimberly Hollifield-Smith, married since 2011, have battled together since Duran suffered a massive stroke last year. The ultra-running pair are poised to return to their adventurous ways. (Contributed photo)

Duran Smith of Newport leaves the hospital in a wheelchair after his stroke last year. At the one-year mark, Smith is walking without a cane and inching his way back to an ultra-running lifestyle. (Contributed photo)

NEWPORT — One year ago, Duran Smith and Kimberly Hollifield-Smith’s lives changed in an instant.

One minute, the married pair from Newport was preparing for a five-stage trek across Canada in the TranSeilkirks Run. The next, Smith had a massive stroke that left the entire right side of his body paralyzed.

The pair were healthy and in shape for ultra-marathons and beyond. Strokes are less common in those with active lifestyles and even less common for those under 50. Smith is 47 and Hollifield-Smith 41.

“It was crazy, and of course us being young, we didn’t know the signs to look for,” Hollifield-Smith said. “Really, his only symptom was his speech became impaired. He didn’t have the typical drooped face or the arm dropping. It was just his speech. By the time we got him to a doctor, his blood pressure was 220 over 116.”

Smith was airlifted to Vidant Medical Center in Greenville, setting up a nightmare of a medical stay in which he spent 12 days on a ventilator, 26 days in the intensive care unit and three weeks at a rehabilitation hospital. The stroke left him with partial paralysis, aphasia and apraxia. The source of the stroke is believed to be hardening of radiation in Smith’s arteries from chemotherapy sustained in an earlier fight with cancer.

“He’s such a trooper,” Hollifield-Smith said. “Through all that, he was so positive. He is a fighter. And for me, he has been such an encourager. I want to make excuses, but it’s hard to do that when you see someone who is overcoming something like that.”

The aphasia has left Smith with limited verbal skills, but that has only strengthened the couple’s nonverbal communication.

“We’ve joked that we’d be the best charades players in the world,” Hollifield-Smith said, “because over the last year, I’ve learned exactly what he’s going to say before he says it.”

Smith’s positivity has been a strength of his, but not a constant in the face of a challenge that has threatened every facet of everyday life.

“There have been really difficult days behind closed doors with just he and I,” Hollifield-Smith said. “There are definitely sad days. It’s a lot to overcome. It’s not just the physical aspect of relearning how to walk and how to use his hands, but it’s also relearning how to speak, how to read and write.”

There was a particularly triumphant moment in Smith’s recovery when he was still battling paralysis and looking for spiritual strength. Doctors would ask him to wiggle his toes or check for feeling on his right side, but to no avail. Then something monumental happened for Smith, the full story of which he was only just recently able to relay to his wife.

“Some good friends of ours brought him back a cross made with wood from the Holy Land,” Hollifield-Smith said. “Duran began holding that cross in his bed, and he remembers one day holding it and looking at his hand, and his hand had a very slight amount of movement. He said that was the defining moment for him. He told himself that day, he was going to work hard and tirelessly to get back his movement. He’s done just that. I’ve seen him work until he almost falls out. He’s been so determined to get back what the stroke stole from him.”

The transition from being in tip-top shape to physical therapy has been a difficult one for Smith who has enjoyed ultra-running and adventure racing with Hollifield-Smith since they were married in 2011.

“That’s the hardest thing for him, comparing what he used to be able to do to what he can do now,” Hollifield-Smith said. “He is extremely grateful for his current physical state, but it is hard.”

Smith came home in a wheelchair, but in one year, he has graduated to walking with a cane and now completely independently. He had a goal to race in a 5K by his one-year anniversary, a goal he met virtually with the “Moving for Mutts” 5K that ran between May 9 and June 30. Smith undergoes professional physical therapy two days a week, plus four more days a week with his wife.

During Smith’s recovery, Hollifield-Smith took on The Great Virtual Race Across Tennessee 1,000K. Typically done in the state of Tennessee over a week or longer depending on the participants’ speed, The Great Run Across Tennessee took on a virtual look this summer in the wake of the COVID-19 pandemic. More than 19,000 people from across the globe took part in the event, running the 1,000 kilometers on their own neighborhood streets, trails and sidewalks. The race took place between May and August, giving runners a challenge of running an average of five miles per day over fourth months. The event wraps up Monday.

“It’s pretty cool that (Gary “Lazarus Lake” Cantrell) designed this virtual race during a time like this,” Hollifield-Smith said. “A lot of us are missing that feeling of showing up to a live race and challenge ourselves physically and mentally. With so many people having signed up, it really became a family. Everyone was sharing their stories, their triumphs and their challenges. Even though we’ve finished, we’re still online checking on those that haven’t, monitoring their progress and encouraging them.”

Smith was unable to participate in the 1,000K, but the retired Air Force airman was still able to join his wife in spirit.

“I carried his dog tags the entire 1,000K,” Hollifield-Smith said. “He was always with me even though he wasn’t out there.”

The next adventure for the couple is the Circumpolar Race Around the World, beginning Tuesday. The relay race for a team of 10 members consists of 30,167 miles that virtually sends runners across the globe through 12 regions. Smith and Hollifield-Smith both plan to participate, along with eight of their friends.

Smith’s recovery is well underway, but he wants to use his journey as a message of resilience and solidarity for others facing a similar challenge.

“We wanted to use his story to help out someone else who is going through the same thing or something similar,” Hollifield-Smith said. “I feel like he’s still here for a purpose. Duran wants people to know, ‘If something like this happens, don’t give up and keep fighting. You can overcome.’”

The acronym to recognize signs of a stroke is BEFAST – balance, eyes, face, arm and speech test. Recognizing the early signs of a stroke and seeking immediate medical help can reduce the chance of brain damage.