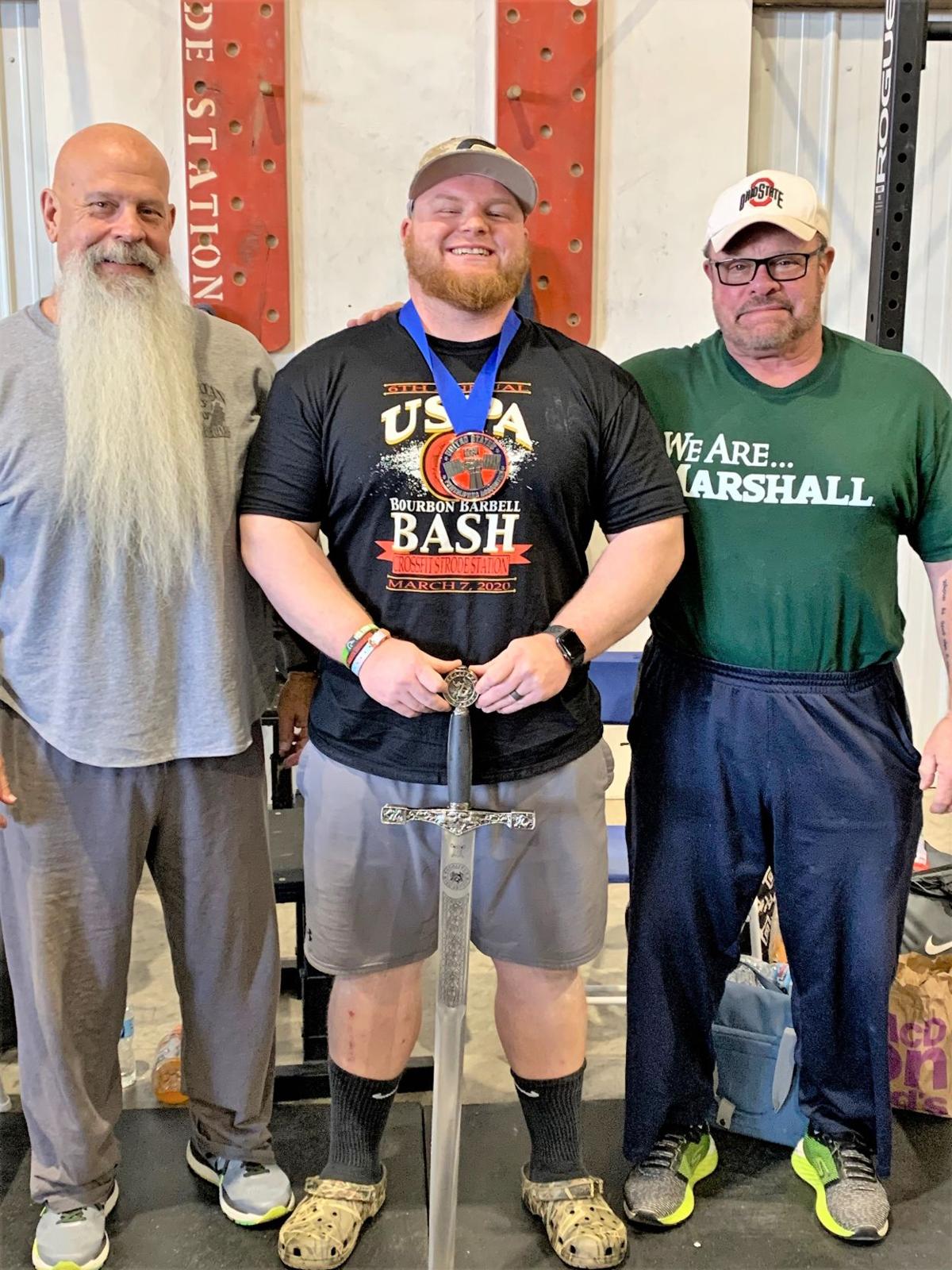 OCEAN — If Croatan student-athletes need to find inspiration in the weight room, they need look no further than their teacher.

Not only is Johnathon “Bean” Rigsby’s name still on the walls there, he continues to win competitions today.

The 2013 grad captured a weight-class victory and an overall powerlifter award March 7 at the sixth annual Bourbon Barbell Bash in Winchester, Ky.

“I think it’s one of the best things in the world, competing,” he said. “That drive is in me. It was instilled in me here in wrestling and football, especially in wrestling. I want to be the best, want to be on top. I try to get my kids to love it too.”

The 25-year-old squatted 705 pounds, benched 474, and deadlifted 655 for a total of 1,834 pounds at the United States Powerlifting Association (USPA) event. Davie Miles also totaled 1,834 pounds, but Rigsby won the 308-pound weight class because he weighed in at a lower weight of 290.

“I was surprised,” he said. “Typically, big guys don’t get the overall lifter award. It’s usually someone who does a crazy amount over their body weight, who pulls something ridiculous.”

Rigsby was joined at the event by his former weightlifting teacher and assistant football coach Terry Lewis and Rick Cornett, a world-record holder powerlifter. Each of them has family in nearby Ashland, Ky.

“They’re both gurus,” Rigsby said. “I’ve got some really good people on my side.”

After four years playing football at Methodist University, he returned to his alma mater to teach physical and health education and strength training and conditioning. He is also an assistant coach in football, wrestling and track and field.

He took the role of Lewis who retired in 2017. Lewis, a longtime powerlifter, has played an important part in his former student’s life.

“One hundred percent,” Rigsby said. “Not only in weightlifting, but the career I picked for myself altogether.”

Rigsby set the school record for bench press (450) and squat (615) in his time at Croatan, records that still stand to this day.

‘They are there to be broken,” he said. “My mentality was different when I was in there. I wanted to go as hard as I could every single day.”

He began committing himself to the weight room after lacerating his liver as a freshman. He suffered the injury as a result of a diving accident in a pool.

His strength proved to pay off on both the football field and wrestling mat.

He helped the football team reach its first winning season in school history with a 6-5 mark as a senior working as both a center and nose guard. On defense, he tallied 36 tackles, registering six tackles for loss, one sack and one fumble recovery.

He won an East Central Conference 285-pound title as a wrestler, finished second at the 2A east regional and helped his team capture an individual tournament state championship while sporting a 46-13 record.

He continued to bench press and squat while playing football but didn’t deadlift.

“We did quick-speed movements like power cleans instead,” he said. “Then after college, I took a year off because my body was hurt.”

In October 2018, Croatan agricultural teacher Will Sutton was planning to attend the Revolution PowerliftingSyndicate (RPS) Braggin’ Rights meet in Greenville and encouraged Rigsby to join him.

After training for two weeks, he took part in the 275-pound raw (little to no additional equipment like knee wraps) classic division and won it with a 600-pound squat, 407-pound bench press and 551-pound deadlift.

Four months later, he won the 275-pound class at the RPS Own the Day in Greenville with a 617-pound squat, 457-pound bench press and 611-pound deadlift.

He goes to bed at 8:30 p.m. and wakes up three to four times a week at 4 a.m. to train for two and a half hours before teaching during the day and coaching in the afternoon and getting home around 6 p.m.

“I get up early because it’s something I like to do, and I want to be good at, so I get up and find time to do it,” he said. “I don’t have time to train in the afternoon, because by then, I’m tired. Plus, I have a wife I’m trying to spend time with.”

Rigsby earned the nickname “Butterbean” from a coach while playing midget football at Western Park in Cedar Point. It eventually transitioned to “Bean.”

He only hears “Johnathon” on rare occasions.

“My wife, when she is mad at me,” he said with a laugh. “That is the only time my name gets called.”

Is wife Brooke, an East Carteret grad, works on MCAS Cherry Point and thankfully keeps a similar schedule as her husband. She previously woke up at 3:30 a.m. for an early shift job but now gets up at 5 a.m.

“She’s played a huge role,” Rigsby said. “She allows me the time to do it. We only get to see each other for about two and a half hours in the evening when I get home from practice.

“And there’s the money. It’s not necessarily cheap to powerlift, from the weight belts and wrist wraps and knee wraps and singlets, protein powder, the supplements, the travel.”

Plenty goes into Rigsby’s training, including proper nutrition, and though he’s 5-9, 275 pounds, he doesn’t eat as much as you would think.

“Powerlifters get a bad rep,” he said. “People think all we do is eat all day and lift heavy weight. You have to worry about what you put in your body, your sleep, your training. I eat three meals, with a snack in between breakfast and lunch. I don’t gorge myself, and I don’t eat after 8 p.m.”

The sport is also more technical than many novices would understand.

“One little technique slip, and you can hurt yourself,” he said. “If you rush yourself, don’t follow your technique, if you rush your setup, you won’t get the weight up.”

As much as he enjoys the competitions, Rigsby reported he gets a lot out of the training as well.

“I have a lot of fun doing it,” he said. “I love the preparation, because I know if I don’t work hard, I won’t be successful. I love challenging myself each and every day.”

He trains at Croatan, as well as the Sports Center in Morehead City and Cape Carteret Aquatic & Wellness Center.  He trains by himself mostly, because not many people are similarly lifting huge amounts of weight.

“I just ask random people for spots,” he said. “I scope out people I think can help. It’s comforting to have that person behind me. It just makes you feel better.”

And besides, the training is more relaxing than the events.

“Your nerves are all out of whack at the competitions,” he said. “That first squat, all eyes are on you. It’s nerve wracking. That first squat is the toughest.”

After winning each of the three competitions he’s entered, he’ll next look to go 4-for-4 when he takes part in the North American Championship at Hickory in October.

Rigsby is aiming to make this a lifetime sport.

“Until my body tells me I can’t do it anymore,” he said.