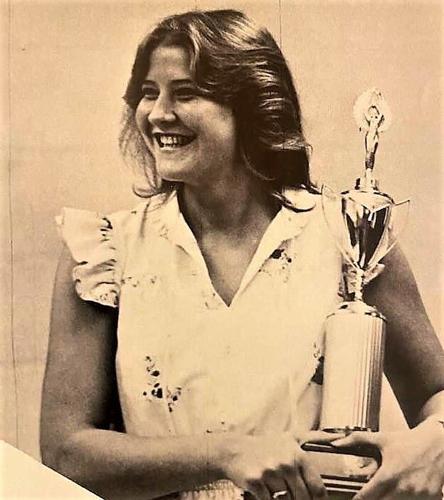 Penny Boudreaux earns the Mariner Award as both a junior and senior at East Carteret. (Contributed photo) 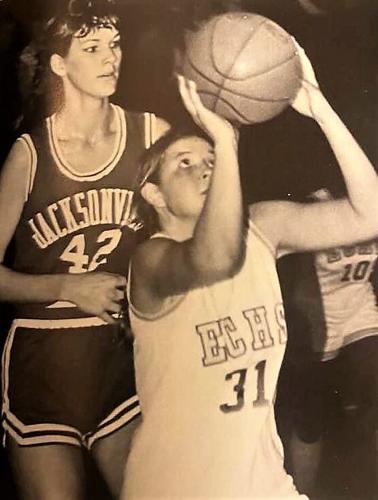 Penny Boudreaux stars on the best girls basketball team in East Carteret history up to that point in 1981-1982 as the Mariners made a trip to the regional final. (Contributed photo) 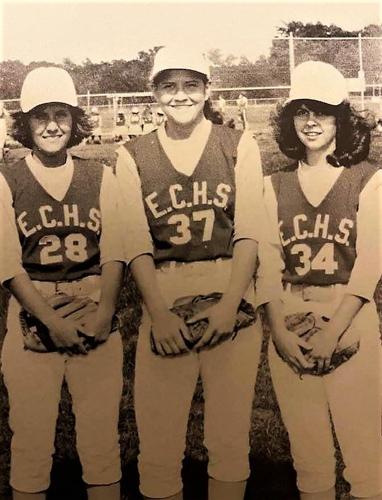 Penny Boudreaux, center, shined in softball as well as basketball and volleyball in her time at East Carteret. (Contributed photo) 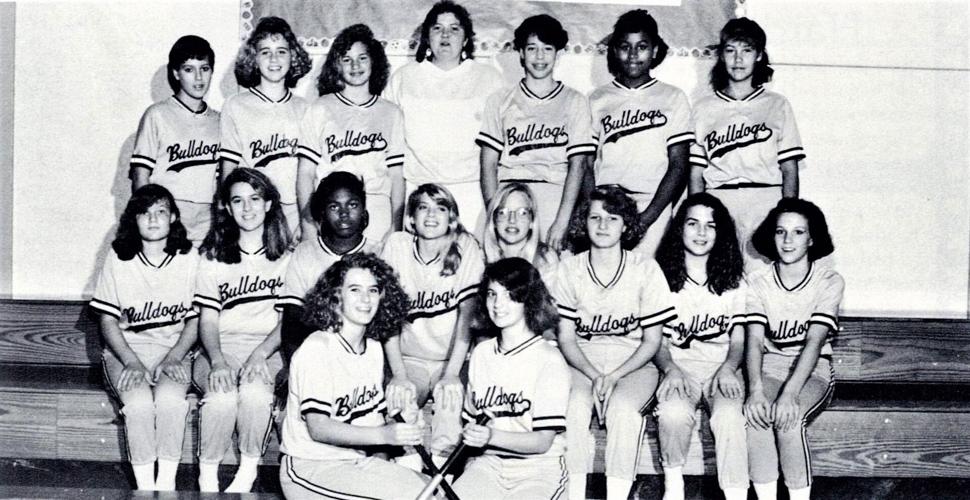 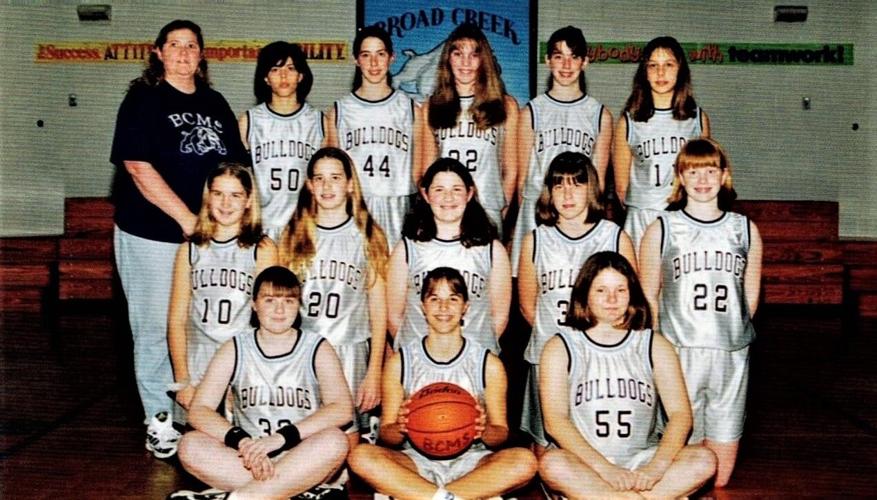 Penny Boudreaux earns the Mariner Award as both a junior and senior at East Carteret. (Contributed photo)

Penny Boudreaux stars on the best girls basketball team in East Carteret history up to that point in 1981-1982 as the Mariners made a trip to the regional final. (Contributed photo)

Penny Boudreaux, center, shined in softball as well as basketball and volleyball in her time at East Carteret. (Contributed photo)

BEAUFORT — Penny Boudreaux used athletics to make a lasting impact on the county rivaled by few others.

A three-sport star at East Carteret, she went on to spend 34 years coaching and teaching at six area schools.

Boudreaux died late last month after a sudden illness. She was 58.

“That really came as a shock,” said Doug Garner, who graduated from East with Boudreaux in 1982 and taught alongside her at three schools. “I knew she was in the hospital, but I didn’t think it was anything that serious. I was crushed. She is definitely going to be missed.”

Garner and Boudreaux each began their teaching careers in the fall of 1987 at White Oak Elementary School before moving over to the new Broad Creek Middle School the following fall.

“I couldn’t believe it when I saw her name on my daughter’s schedule, but there is only one Penny Boudreaux in Carteret County,” Rock said. “I couldn’t believe she was still teaching, because I don’t think I really realized that was her first year teaching when I had her. I was so excited I went to the school so I could see her. She told me my daughter was so much like me.”

“The older we get, the more we experience death, but this one hit me very differently,” she said. “I mean, she was my coach, and she was my first coach. She was so supportive. I loved volleyball, but I really loved Ms. Boudreaux. She taught us the game.”

As she would throughout her career, Boudreaux led Broad Creek to a conference championship in Rock’s eighth-grade year. The team went undefeated.

“She was so proud and so encouraging,” Rock said.

It wasn’t the wins and losses that Rock remembered, however, but the little things.

She recalled Boudreaux cramming nearly the entire volleyball team into her red two-door Honda hatchback and driving the players over to White Oak Elementary to practice because the Broad Creek gym wasn’t yet complete.

“I don’t know how she did it,” Rock said. “It probably wasn’t the whole team, but it felt like it. There was not a lot of breathing room, that is for sure.”

Rock went on to graduate from West Carteret in 1994.

Boudreaux also matriculated over to West at that time to serve as an assistant girls basketball coach during the most successful run in school history.

“She was a player’s coach,” said Phyllis Willis, the head coach of those teams and a member of the West Carteret Athletics Hall of Fame. “She loved the kids. Now she was tough on them, but she loved the kids with a passion and they loved her completely, and they would do anything for her. They would run through a brick wall for her.”

Willis said the bus rides during those days are among her favorite memories with Boudreaux telling stories and making players and coaches laugh so hard they could hardly breath.

Willis nearly had her son, C.N., on a bus ride home from Hoggard during the 1994-1995 season, causing Boudreaux to panic, thinking she was going to have to deliver a baby.

Always a character, Boudreaux soon took C.N. under her wing.

“He would be with us at practice a lot, and she would feed him things that no child should have at that age,” Willis said. “She would bite the ends off of French fries so that he could suck out the insides. That was at 6 months old. And at a year old, she was teaching him how to eat corn nuts. He’s 28 now, and he still likes corn nuts.”

Willis and Boudreaux drew closer in the past eight months, speaking on the phone several times a week as they started to enjoy retired life and bird watching.

“It was a surprise,” she said. “She had knee replacement surgery years ago and needed another one. I had offered for her to come and stay with me here in New Bern and I would take care of her in her recovery, but we didn’t get there. I wish we would have.”

The two first met in the fall of 1988 when Willis took the job at West Carteret and Boudreaux was coaching at Broad Creek. Their first interaction came in a pickup basketball game that Willis called physical and competitive.

Boudreaux’s reputation for competitiveness began in high school as a three-sport star at East. She was a team captain and all-conference performer in basketball, volleyball and softball, and pulled off the rare feat of receiving the Mariner Award as both a junior and senior.

“She was always very competitive,” said Rolanda Lewis Golden, a teammate of Boudreaux’s in basketball and softball. “She wanted to win, was always a fighter. She was a very good defensive player. She would scrap and fight. She hustled. If the ball was on the floor, she was after it. And in softball, it was the same thing, she was good on defense. She always gave it her all. She was all out all the time. She liked to have fun, but she wanted to win.”

Boudreaux and Golden were on the best girls basketball team up to that point in school history during the 1981-1982 season. The Mariners won both the regular season and conference tournament titles on their way to a district championship and a trip to the regional final.

The two later worked together at Down East Middle School where Golden currently serves as principal.

Golden said Boudreaux’s competitiveness carried over to the classroom as she strived to win homeroom competitions.

The two also played in the Carteret County Women’s Softball League. Boudreaux coached and played in the league for more than 20 years.

Her determination, hustle, grit and effort didn’t wane in the laid-back competition, according to Garner.

“A lot of those women were going out there to relax and have a good time, but she didn’t look at it that way,” he said. “She was looking for that W. She would take no less. She would get on the women out there as much as she would the middle school kids for not giving enough effort.”

Garner said he remembers student-faculty basketball games at Broad Creek when Boudreaux was out for blood despite the good-natured environment.

“She was serious about ball,” he said. “That is how she was when she played. She was very serious about it, and she wanted everyone else to be as serious as her, and it showed up in all her teams. Her girls won a bunch of championships in all three sports in middle school. She was an excellent coach and stayed on the girls and expected a lot out of them, and she got a lot out of them. She would fuss them out but then give them a hug.”

You are missed everyday.

You are missed every day.