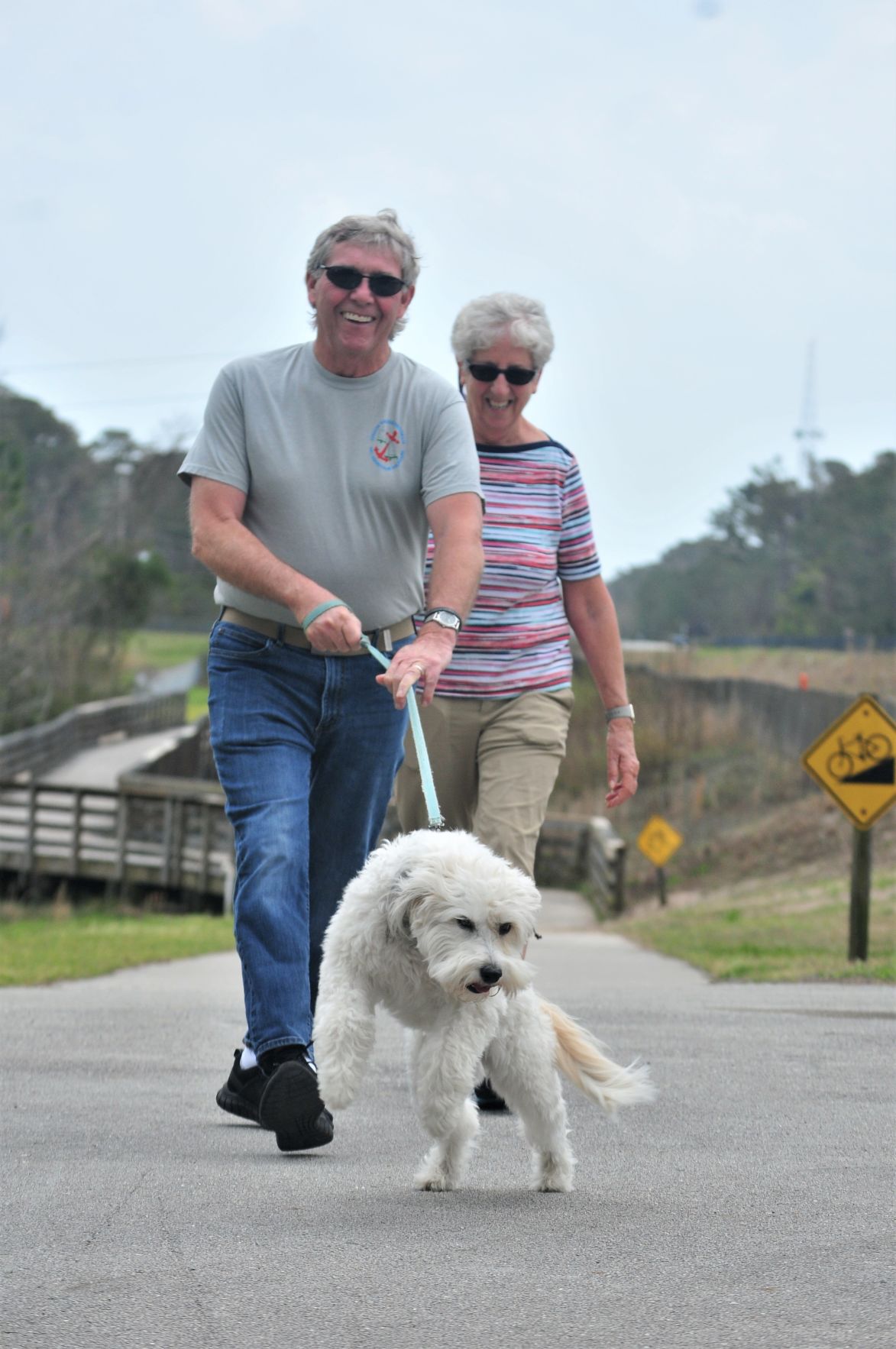 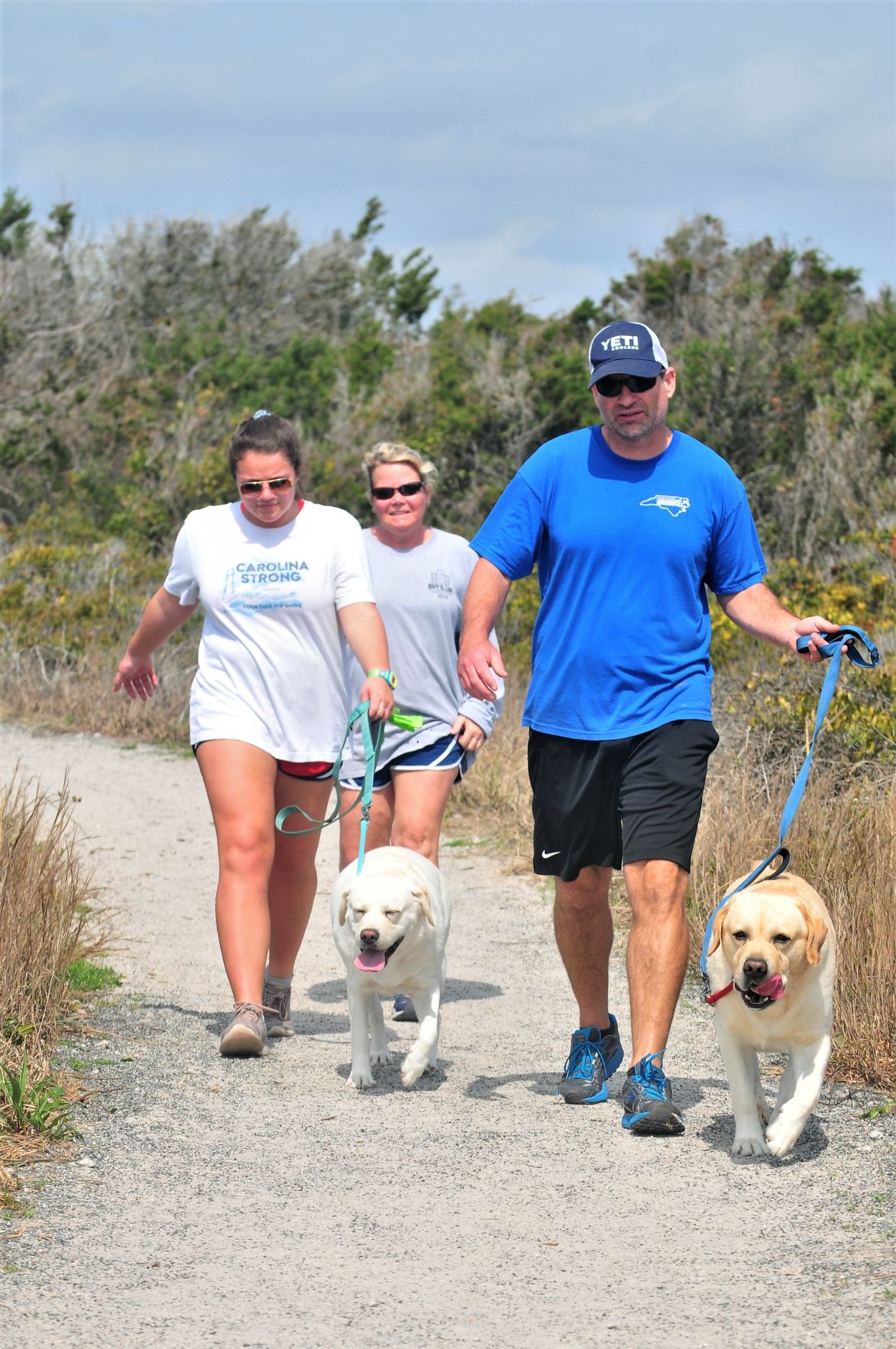 (Note: This is the first of a three-part series that will be available on the web today starting at 9 a.m., then at 10 a.m. and noon.

Material and photos for this story were gathered before further shutdowns stemming from the COVID-19 outbreak, most notably here in reference to Fort Macon State Park and its Elliott Coues Trail.)

ATLANTIC BEACH — Activities and venues are closing down left and right, but county runners, walkers and dog walkers are still pounding the pavement and woodsy trails.

The effects of the COVID-19 pandemic have been felt at every turn. Large gatherings are a no-no, but with spring officially sprung, more people than ever are getting out to enjoy the best weather the Crystal Coast has to offer.

“Our exercise routines have actually gotten better,” Paul Sproul of Morehead City said. “We haven’t seen this many people on the trail in a long time. We’ve been getting the dogs out and getting extra quality time with our kids. It has been nice.”

The Newport Middle School P.E. teacher was out with his wife, Pamela, and daughter, Abigail, walking their dogs Bogue and Baylee, on Saturday, March 21 during a busy afternoon on the Elliott Coues Nature Trail at Fort Macon State Park in Atlantic Beach. Since then, however, the trail and park have been closed to visitors.

“I’m an on-again, off-again exerciser, so this is good motivation to get outside and enjoy the day,” Pamela Sproul said. “We love this trail, too, just for walking the dogs and stretching our legs. The bathrooms are closed, which I feel like makes it safer.”

Most of the country is currently in isolation as “social distancing” becomes the norm for many people, but that hasn’t restricted daily exercisers from getting in their daily routines as they venture out in groups of one, two or three.

“We’ve been very blessed,” Catherine Pitt said. “We come to Fort Macon every weekend, and we feel so fortunate that it’s still open. We usually walk the ocean at low tide before we hop on the loop.”

Pitt and her husband, Lewis, own a home in Indian Beach and utilize the nature trail as often as they can.

“The rest of the beach accesses have closed, so we’re glad this is still open,” Lewis Pitt said. “Everyone on the trail has been very mindful of keeping a distance. We’re very outdoorsy, and it would be very hard for us if we couldn’t get out.”

Taking Back the Road

With fewer cars on the road and fewer people leaving the house for work, there has never been a better time to hit the road or nature trail for a walk, a jog or a bike ride.

“I was on the Atlantic Beach bridge this morning, and it was incredible how many people were out there running,” Heidi Tucker of Morehead City said. “It’s a great time to be out and about running. The bridge has a lane closed for construction. so it’s a little safer and there are much fewer cars out driving right now.”

Tucker, a multiple race winner in the county and an avid marathon runner, has had more time to devote to running and exercise with the coronavirus closures and stoppage in group activities.

“I’ve been running more since the break because I have a little more time,” she said. “It’s been nice to run more during the light of the day because I don’t have to squeeze a session into my schedule at 5 a.m. It’s really something to embrace right now. There are so many things that we feel like we’re restricted with or that we can’t do, and running is the complete opposite. We can be consistent there.”

With the weather turning warm and breezy – it was 74 degrees on Saturday, March 21 with partly cloudy skies and light winds wavering between 5-10 mph – it’s no wonder that people are getting outdoors more.

“We’ve been working out in the neighborhood,” Paul Kelly of Beaufort said. Kelly, who is paralyzed, is an avid participant in hand-crank wheelchair events, many of them being marathons.

“I don’t know if the increased activity I’ve seen is a result of cabin fever or the nice weather that’s come in,” he continued. “Usually you see an uptick in people getting their outdoor exercise. More and more day-to-day activities are getting interrupted, but the current situation hasn’t had much impact on my workouts. You can still maintain your healthfulness and maintain a social distance.”

People looking for fitness are turning to outdoor activities more in the wake of health club closures across the state. Kara Blount and Sonja Hood, who both own homes on the island, only just discovered the nature trail this weekend.

“We just came here yesterday for the first time, and we love it,” Blount said. “It’s beautiful. You don’t even feel like you’re in the same state.”

Hood added, “We are turning to outside exercise more now that the gyms and fitness centers are closed down. Today, there are a lot of people out here, so I think everyone else has the same idea.”

The decrease in other activities, plus the favorable weather, have led to an increase in trail-goers at Fort Macon.

“I come every weekend,” said Shawn Murphy of Newport. “Last weekend, there weren’t many people, but there has been a lot of people here today. I think that might also be because of the nice weather. I really enjoy being out here and I enjoy being outside, so this place is perfect.”

Even Cary resident Tyler Pake, a native of Beaufort, still makes it out to the Elliott Coues Trail most weekends on his visits home.

“I still get out and run with a few friends, usually there or the beach at low tide,” Pake said. “I was just there a few days ago. I don’t know if we were exactly staying six feet apart, but we’re outside and we’re running. We’re lucky here, too, because we have great places to run and great weather. We live in a great place for fresh-air outlets.”

“We live in crazy times,” he said. “I don’t think anyone expected it to get to this level, and running is something you can control still. With everything uncertain, running can be a solo time outside and get free of the distractions. You just need clothes, shoes and space.”

According to the U.S. National Library of Medicine, running, even 5-10 minutes per day and at slow speeds, is associated with markedly reduced risks of death from all causes and cardiovascular disease.

“I hear a lot of people say, ‘I would love to run, but I just can’t,’” Tucker said. “Obviously, there are people with physical limitations, but a lot of time that ‘can’t’ is a mental can’t. They think they don’t like it, but the idea of it sounds nice. I’d suggest they start with a walk, transition into nine minutes of walking and one minute of running and then keep shifting it towards running until you meet whatever goal you’re trying to reach.”

“Even if you don’t run, you can go out and walk right now,” Pake said. “If you want to start running, there’s great free programs online right now that you can take advantage of. It’s a chance to get outside, and we live in a beautiful county.”

Tucker also offered advice to squeeze in a little entertainment during a walk or a run an added incentive for those looking to get off the couch and into their sneakers.

“Getting out the door is always the hardest part for me, but you always feel better than you did at the end,” Tucker said. “I’ve found some great podcasts or books on tape and save those for my run. It helps me get through it while I’m learning something or being entertained. I can check out and vibe in nature while still maintaining that social distance.”

The county offers plenty of places to get in a run, a walk or a jog, not including the miles of paved roads and standard sidewalks.

For those looking for an added element to their run, such as scenery or bike-friendly paths, the top spot on everyone’s list is the Elliott Coues Trail, which will certainly be visited by runners and walkers after coronavirus restrictions are lifted.

“You get off the pavement, and you get a nice mix of sunny and shady,” Pake said. “It’s also really hilly for Carteret County standards. That makes for stronger runners.”

Tucker added, “Fort Macon’s trail is for sure one of my favorites. You get a variety of terrain, and you’re off the road and out in nature. There are dunes, sand, a great view of the ocean and shaded areas. You can do it out and back or the full 3.3-mile loop, both of which are really doable.”

Other hotspots are Front Street in Beaufort, the 11-mile Emerald Path and the Emerald Isle Woods Park in Emerald Isle, Theodore Roosevelt Nature Trail in Pine Knoll Shores, the walk/bike sidewalk that runs the length of Bridges St. Ext. alongside Swinson Park in Morehead City, Rotary Park in Morehead City, the Patsy Pond Nature Trail in Newport and the Neusiok Trail in Newport.