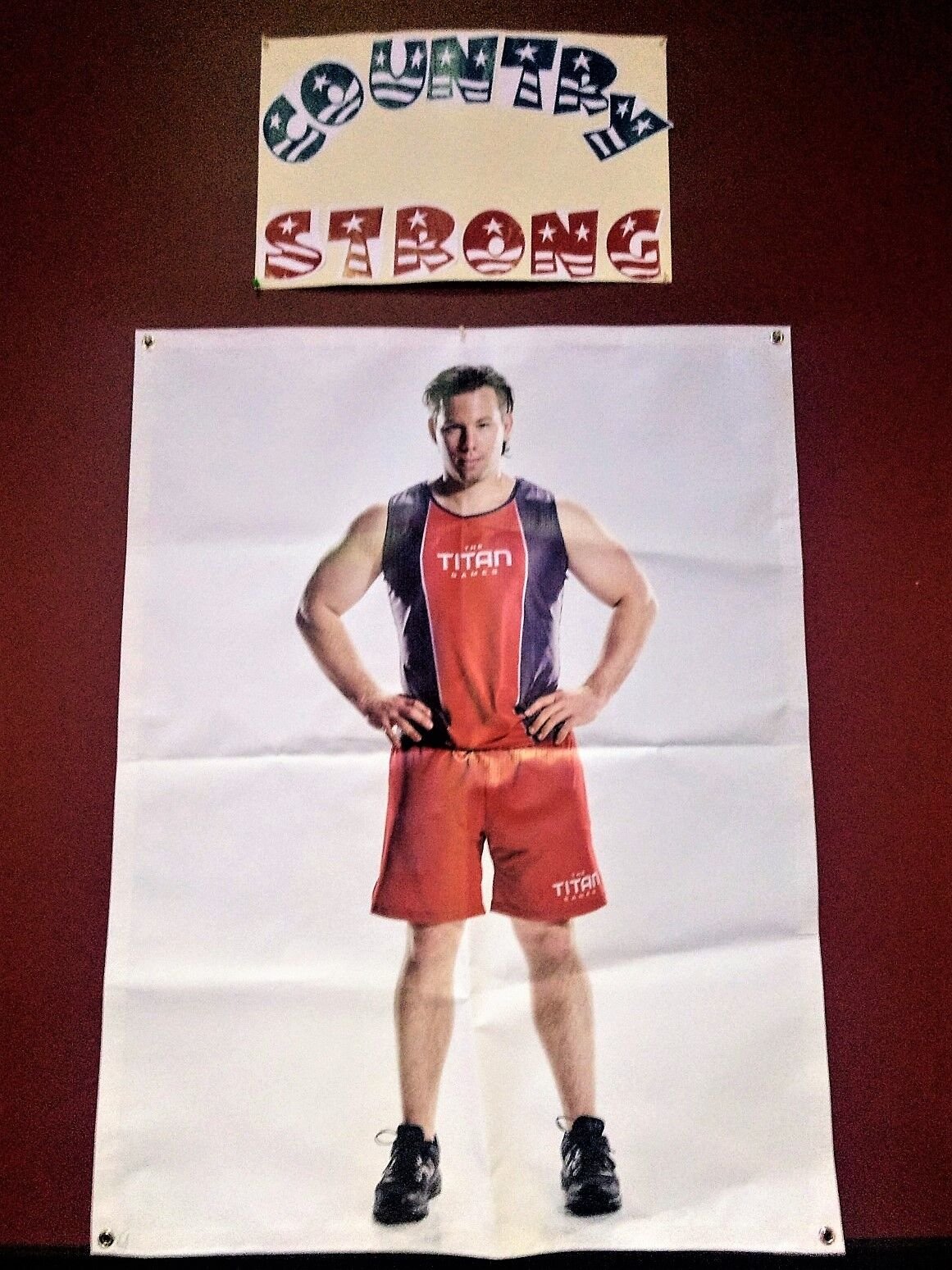 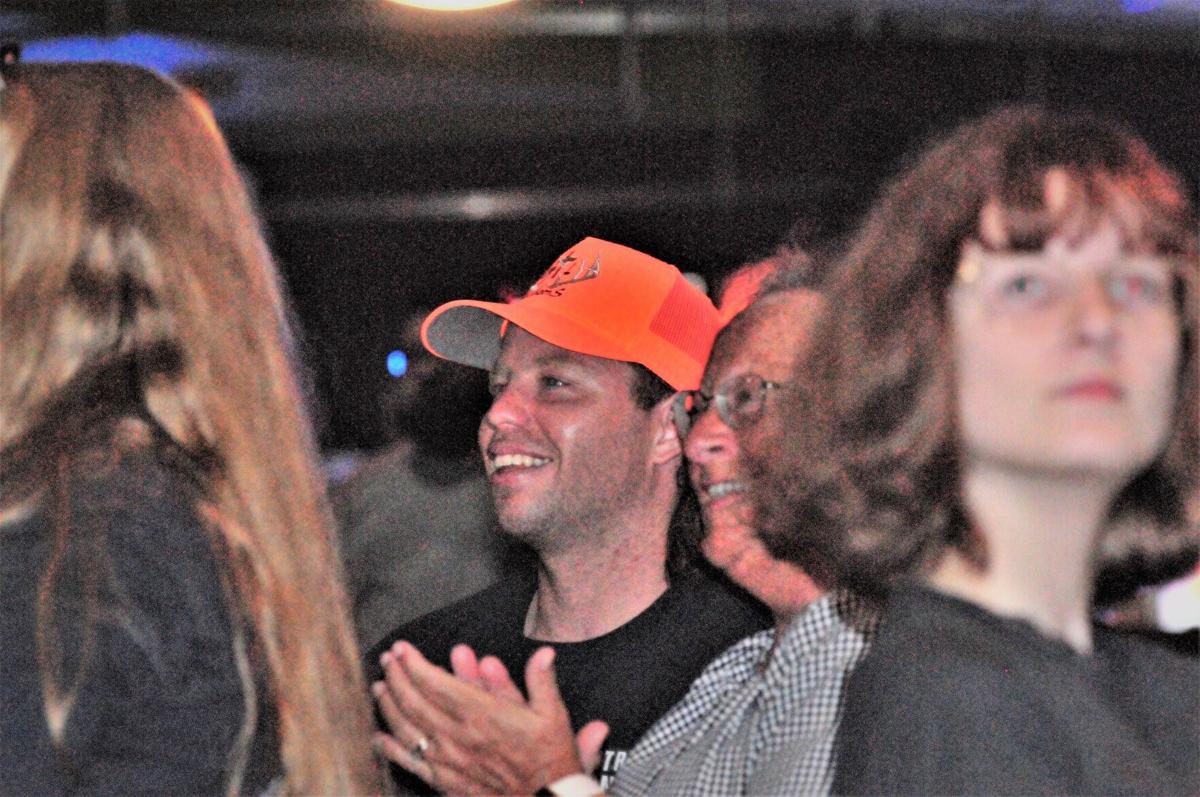 Croatan jayvee basketball coach Will Sutton watches himself defend his Mount Olympus title on NBC’s The Titan Games next to family and friends on Monday at Mac Daddy’s in Cape Carteret. (Zack Nally photo) 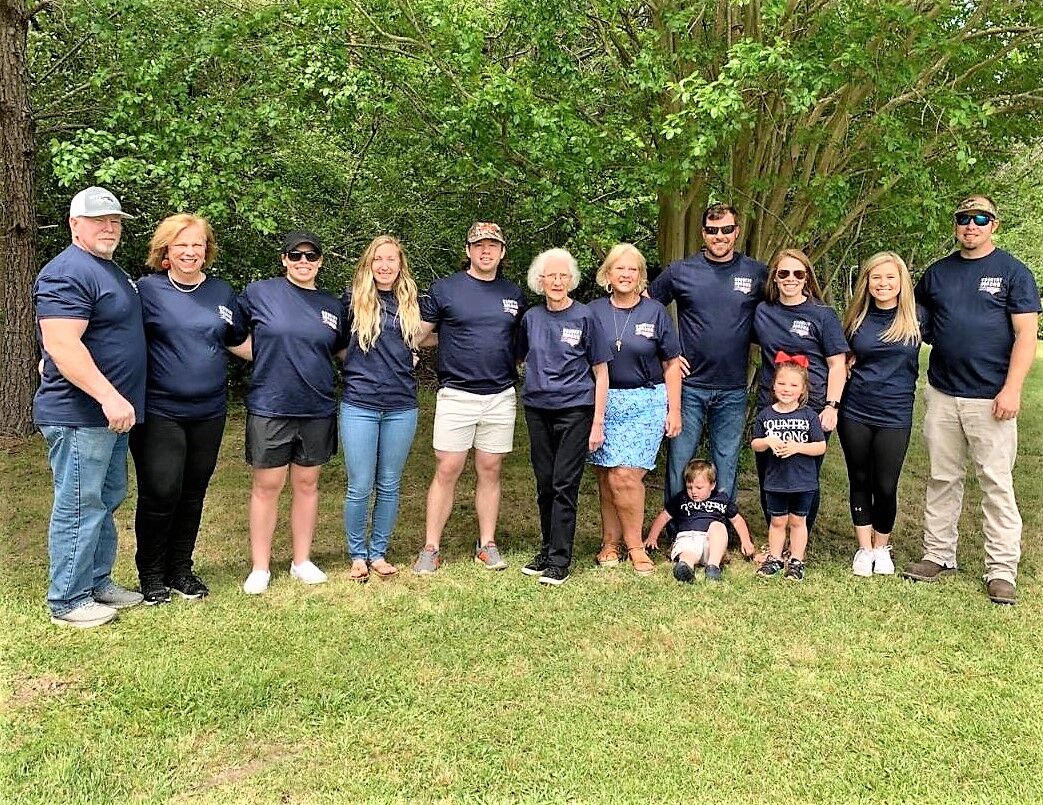 Trenton resident Will Sutton, center with hat, poses at Mac Daddy’s in Cape Carteret with his family wearing “Country Strong” T-shirts in honor of the 26-year-old’s run on NBC’s The Titan Games. (Zack Nally photo) 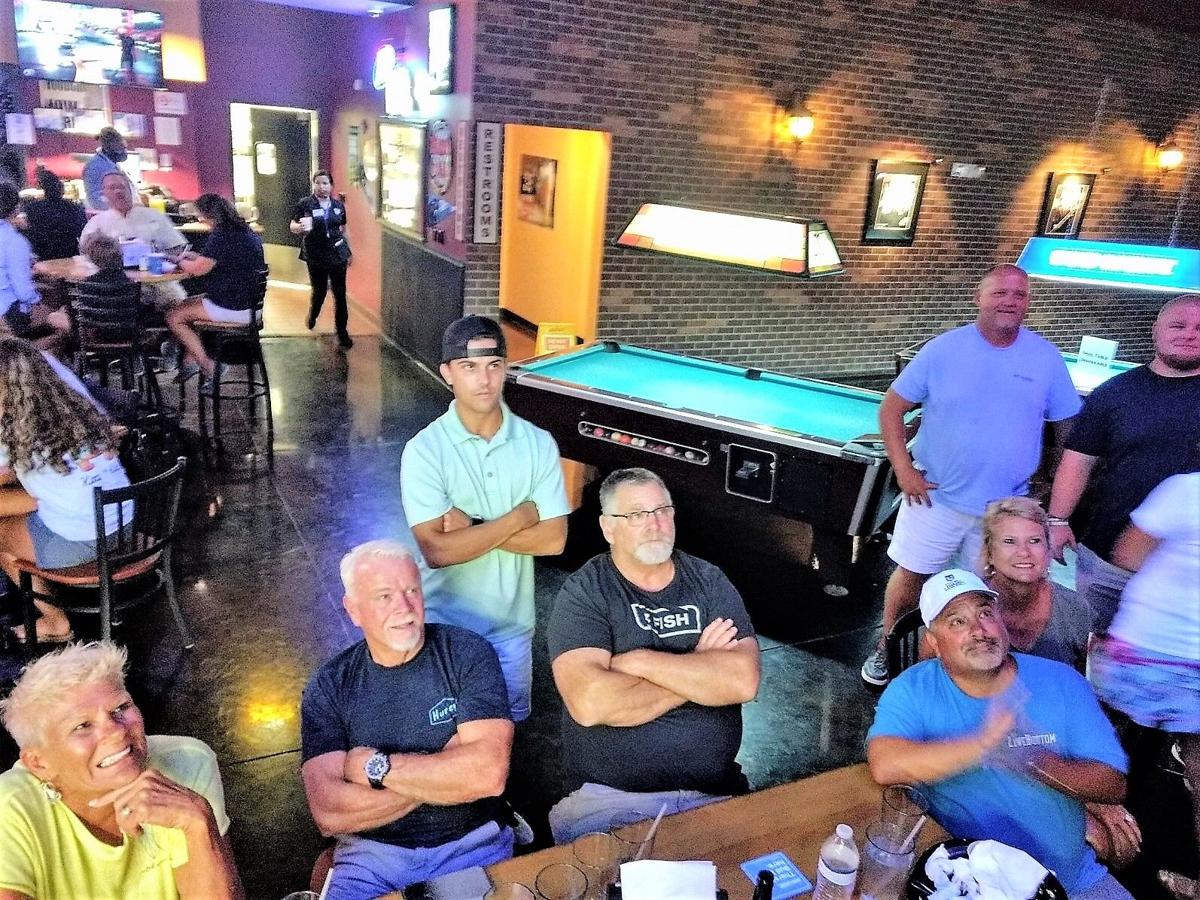 A table of Croatan coaches and administrators gather at Mac Daddy’s in Cape Carteret to watch agriculture teacher Will Sutton defend his title on Mount Olympus. (Zack Nally photo)

Croatan jayvee basketball coach Will Sutton watches himself defend his Mount Olympus title on NBC’s The Titan Games next to family and friends on Monday at Mac Daddy’s in Cape Carteret. (Zack Nally photo)

Trenton resident Will Sutton, center with hat, poses at Mac Daddy’s in Cape Carteret with his family wearing “Country Strong” T-shirts in honor of the 26-year-old’s run on NBC’s The Titan Games. (Zack Nally photo)

A table of Croatan coaches and administrators gather at Mac Daddy’s in Cape Carteret to watch agriculture teacher Will Sutton defend his title on Mount Olympus. (Zack Nally photo)

CAPE CARTERET — Will Sutton’s friends and family are getting used to seeing the 26-year-old dominate in NBC’s The Titan Games.

They did it together at Mac Daddy’s in Cape Carteret on Monday, assembling for a viewing party to cheer on the Trenton resident and Croatan jayvee basketball coach. When Sutton prevailed again in defense of his Mount Olympus title, the room broke out in cheers while the humble agriculture teacher flashed a quick grin.

“It was awesome to have the whole community coming out and watching us tonight,” Sutton said. “It was a really great atmosphere. I’d like to thank Mac Daddy’s for hosting this party and providing awesome hospitality.”

If Sutton remains the champion next week, he’ll earn an automatic spot on Mount Olympus for the Eastern Region final, looking to join Western Region champion Noah Palicia and Central Region champion Matt Chan. The male and female winners of each region will face off against each other for the right to win $100,000 as this year’s Titan.

Sutton’s hook each episode has been the phrase, “Country Strong,” emblematic of his farm-raised childhood in Trenton. He wants people to know that not having typical “gym strength” isn’t a hindrance to meeting the kind of physical and mental demands of a contest like this one.

“That’s what (host) Dwayne ‘The Rock’ Johnson wanted,” he said, “to show what everyday people were capable of with the right attitude and a hard work ethic. You can go a long way in life with those things. People who are raised in rural America, they get underestimated sometimes. They don’t go to the expensive camps and expensive showcase tournaments, but they’re strong. They’re out there working every day, working on family farms and building muscles.”

The Mount Olympus course is no joke, something Sutton’s competitor learned Monday. Steenberg, a world-ranked professional long drive golfer, was already trailing the defending champion when he popped a bicep during the section of the course that sees competitors lift themselves up an incline using two reverse-locking grips. The region’s weightiest contestant at 250 pounds (Sutton is 180), Steenberg fell partway up the incline and then indicated he was tapping out.

“You never want to win like that,” Sutton said. “You like to give fans a good show at the end. But you know, it’s sports. A win’s a win. I was just happy to defend my spot n Mt. Olympus. I hope Ryan’s OK and recovering from his injury.”

“No, it wasn’t easier,” he said. “It’s still really terrible. It’s so physical and mental, it’s unbelievable. You can’t go in there expecting to beat whoever’s beside you. You just worry about doing it to the best of your ability and focus on your own performance. It’s a best in of itself. You have to respect the mountain.”

Johnson and the studio crowd were impressed by Sutton’s second epic display of strength and athleticism, as was the crowd at Mac Daddy’s. Sutton doesn’t brag about himself, but he couldn’t help being pleased with how he looked in the defending champion’s all-black uniform, as opposed to the blue he wore as the challenger last week.

“It’s a muscle color, you know?” Sutton said. “I thought I looked pretty good up there. I hope to stay in that uniform for as long as possible, rocking the whole look with the mullet.”

For Sutton, his victories came months ago when the episodes were filmed before COVID-19 pandemic early this year, and by mid-March, caused school and business closings nationwide. He still has to keep his eventual finish a secret, for now just thankful he got the opportunity to compete after a power-lifting resurgence.

“All those long training and lift sessions paid off,” Sutton said. “When I was doing them, I was just doing them for myself, to better myself, and then out of the blue, I get this tremendous opportunity. All that hard work was for something, even if I didn’t know what it was for. Sometimes being ready for that opportunity is all that matters.”

We are so very proud of our Croatan High School teacher!! Way to make those heavy obstacle and arduous courses make look so easy!! You are an amazing role model for CHS students and local fans!