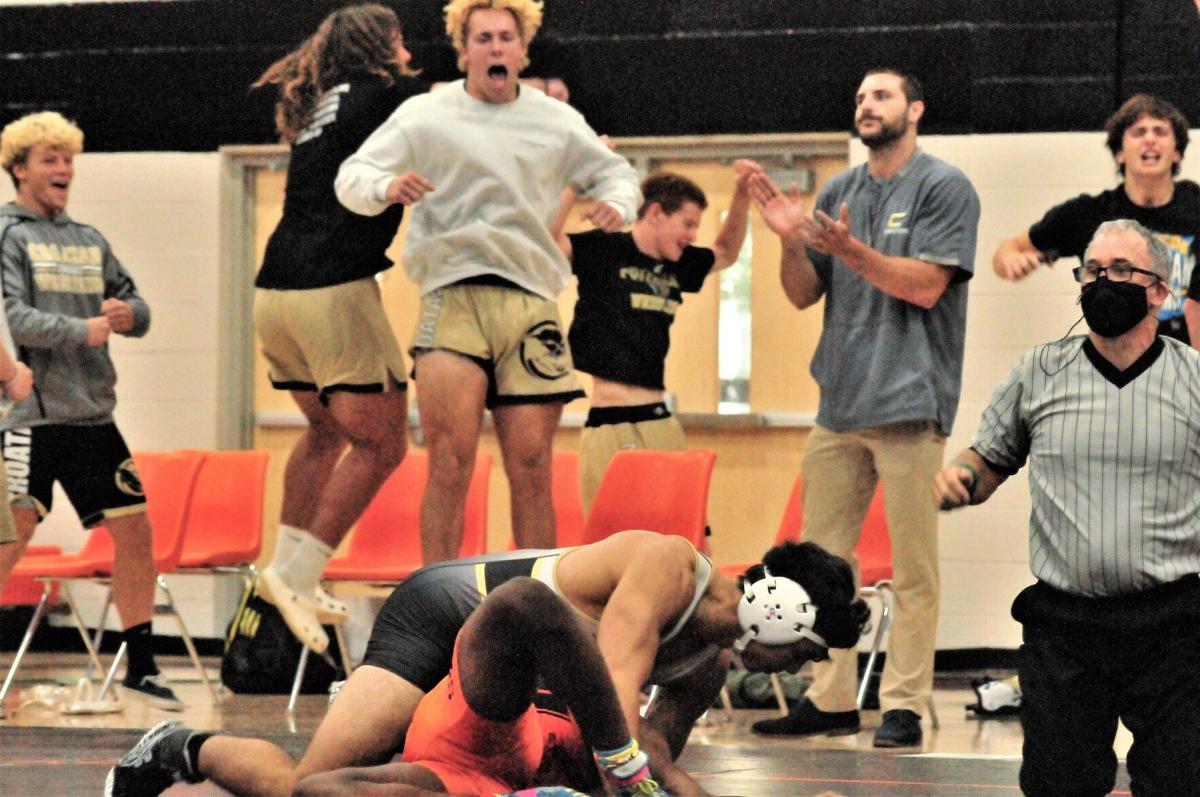 The Croatan bench erupts in cheers when Anthony Marello pins his 152-pound opponent to deliver the Cougars to a 37-34 win over Southwest Onslow and a piece of the Coastal 8 championship. (Zack Nally photo) 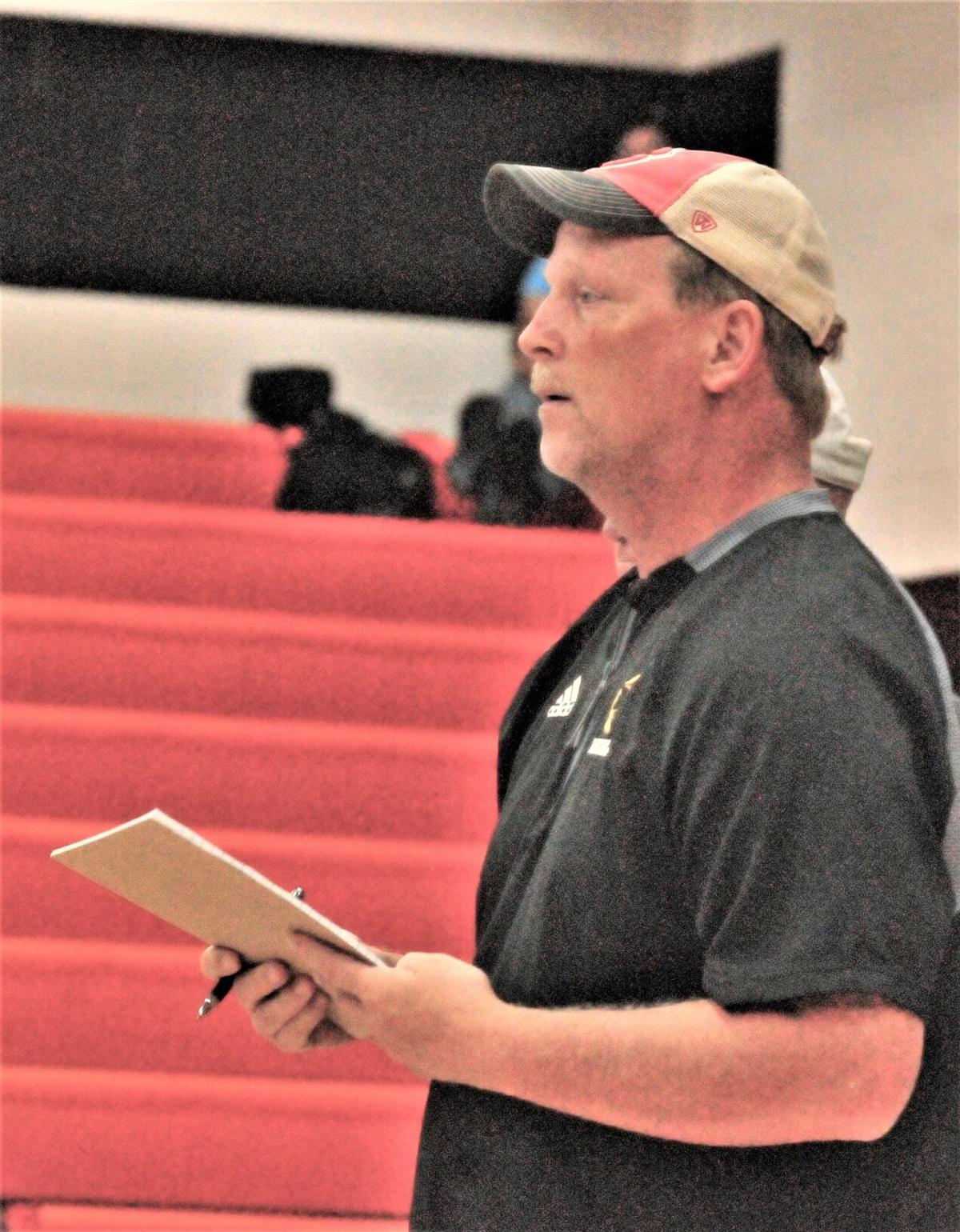 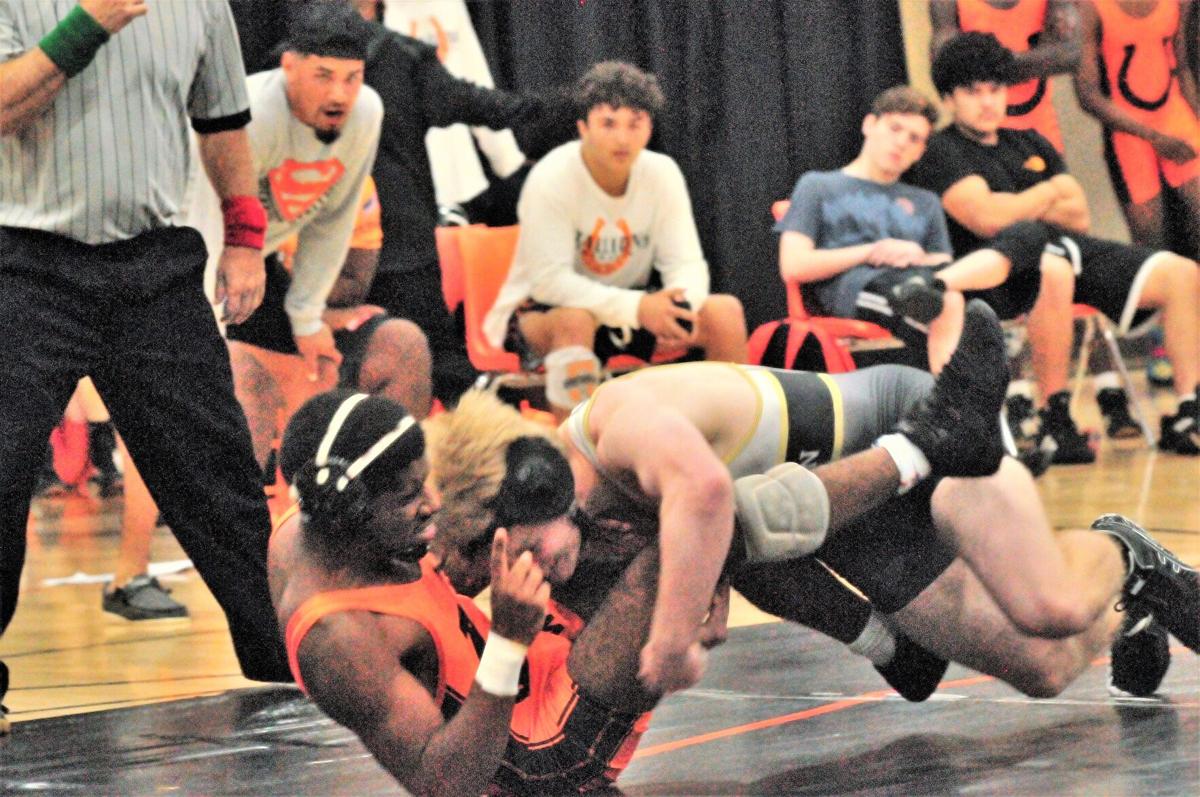 The Cougars’ Cody Raymond gets takedown points against his 145-pound opponent on Wednesday for a pivotal bout in the match with Southwest Onslow. (Zack Nally photo)

The Croatan bench erupts in cheers when Anthony Marello pins his 152-pound opponent to deliver the Cougars to a 37-34 win over Southwest Onslow and a piece of the Coastal 8 championship. (Zack Nally photo)

The Cougars’ Cody Raymond gets takedown points against his 145-pound opponent on Wednesday for a pivotal bout in the match with Southwest Onslow. (Zack Nally photo)

JACKSONVILLE — The Croatan wrestling team needed a good night on the mat, and a little luck, at Southwest Onslow on Wednesday.

It went into a tri-meet with Southwest and Dixon needing a win over the Stallions and a Bulldogs loss. It got both, and for it a three-way tie for first place in the 1A/2A Coastal 8 Conference.

“It’s nice for the seniors because they get to put another number on the banner,” Croatan coach David Perry said. “Knowing we didn’t wrestle our best against Dixon, this means a lot to them.”

In their only match of the tri-meet, the Cougars defeated Southwest 37-34 for the Stallions’ only conference loss. Dixon had already defeated Croatan 42-31 on June 2, but the Stallions’ 35-27 win over the Bulldogs on Wednesday gave each team one loss.

Anthony Marello (14-4) put a stamp on the win with a pin over Jeremiah Jones at 152 pounds. If the pin hadn’t come in the third period, the Cougars would have tied the Stallions 34-34, leading to a criteria win with eight weight class wins.

“It definitely made for an exciting end,” Perry said. “I thought we wrestled really well tonight overall. It was one of our best matches of the season.”

“Those were good wins,” Perry said. “We kind of finished at a place where I thought we’d win if they wrestled well. It’s a good place to end, a strong place in our lineup.”

Croatan started in a 10-0 hole before Landon Gray (15-3) put it on the board with a tiebreaker criteria decision over Anthony Lowe at 182 pounds. Dakota Gray (13-1) cut the lead to one with a pin of Jacob Reyes at 195.

“Landon’s win was big,” Perry noted. “He got the ultimate tiebreaker that, if he’d lost it, would have resulted in a tie or a loss for us.”

“I think they just didn’t have anybody that could compete with them,” Perry said. “The kids they did have, I think they were saving them for Dixon because Dixon isn’t very strong there.”

Croatan got another win from Colton Lieske (10-6) at 106 pounds. The first-year wrestler posted a 12-6 decision over Carter Duhon.

“Colton, that’s the first time he’s gotten down to that weight,” Perry said. “That was a big win for him. It was a tossup match.”

The Cougars will host the 2A east regional tournament on Tuesday.

Here are results of the dual: