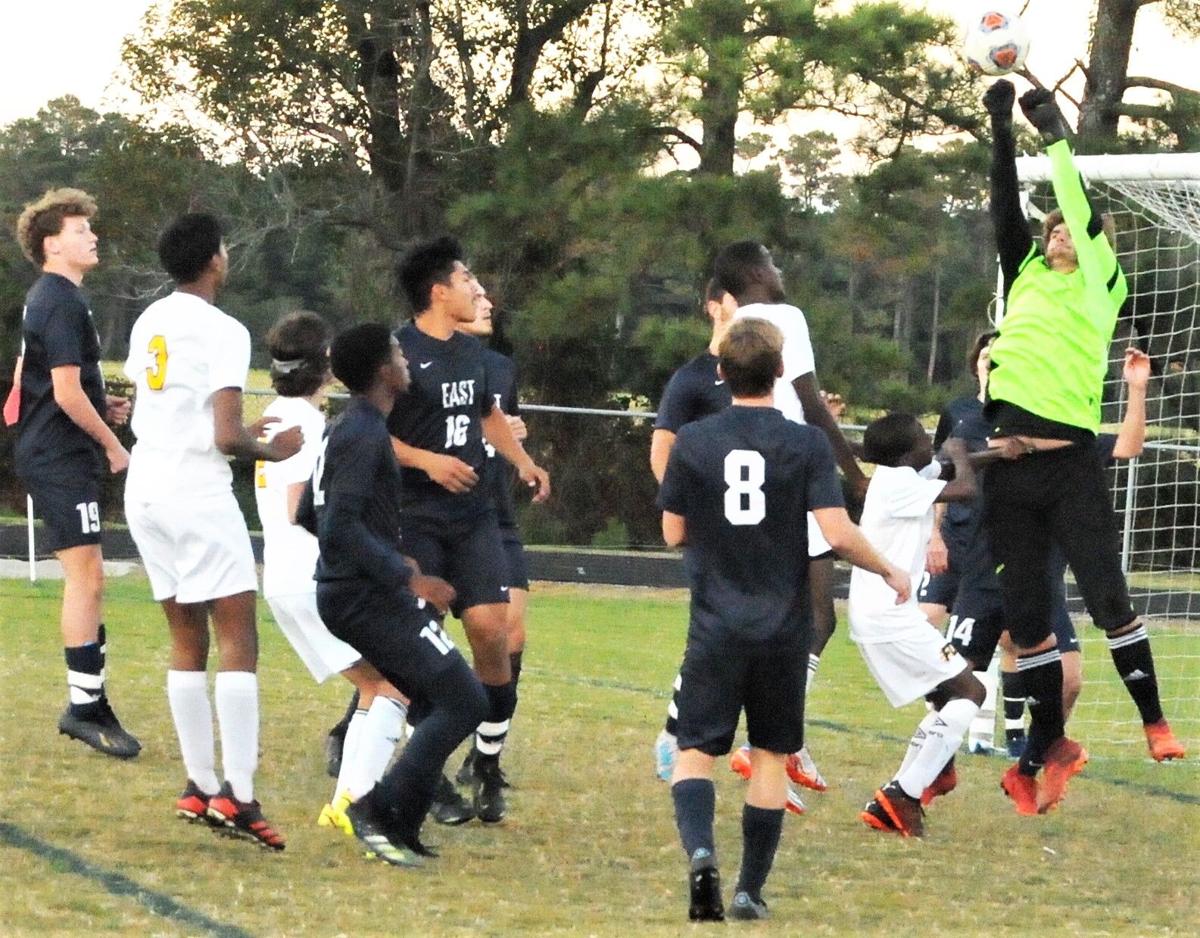 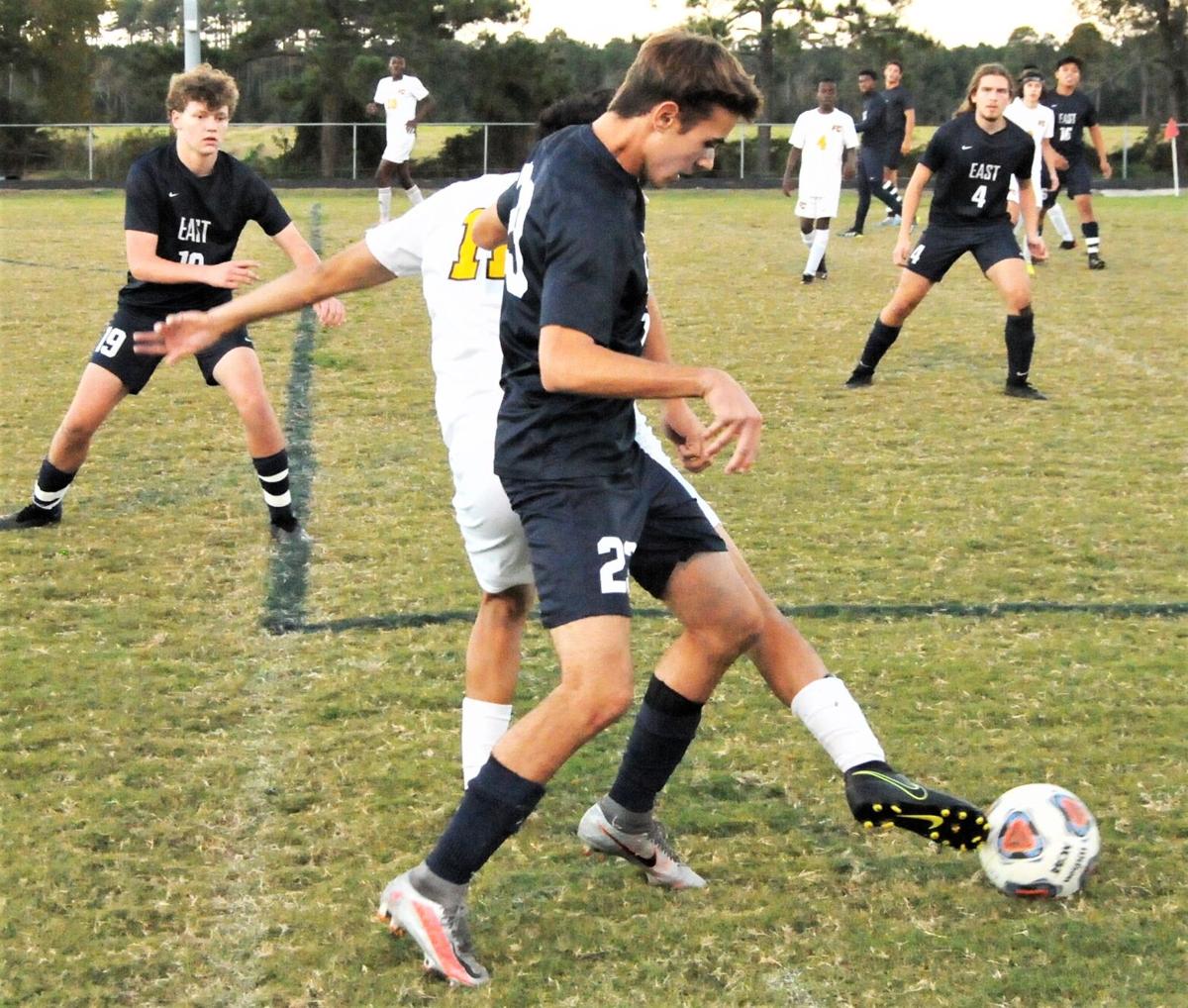 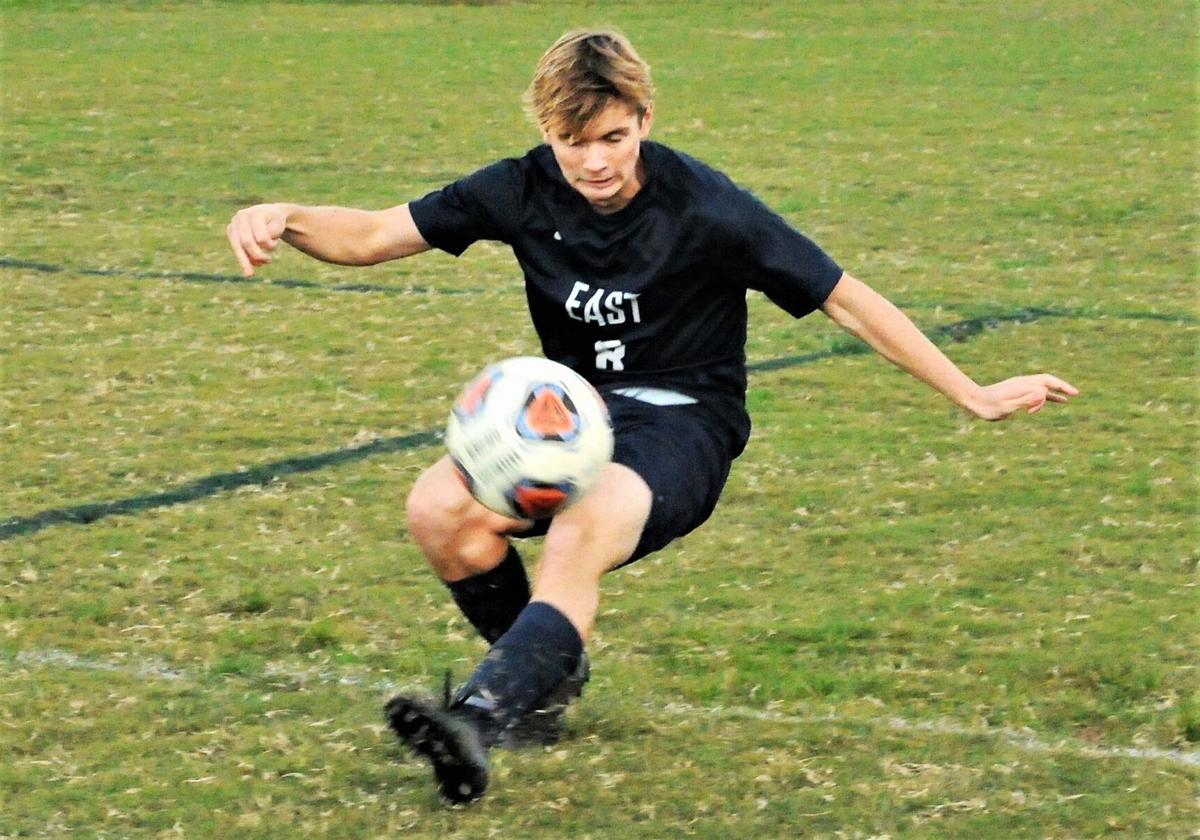 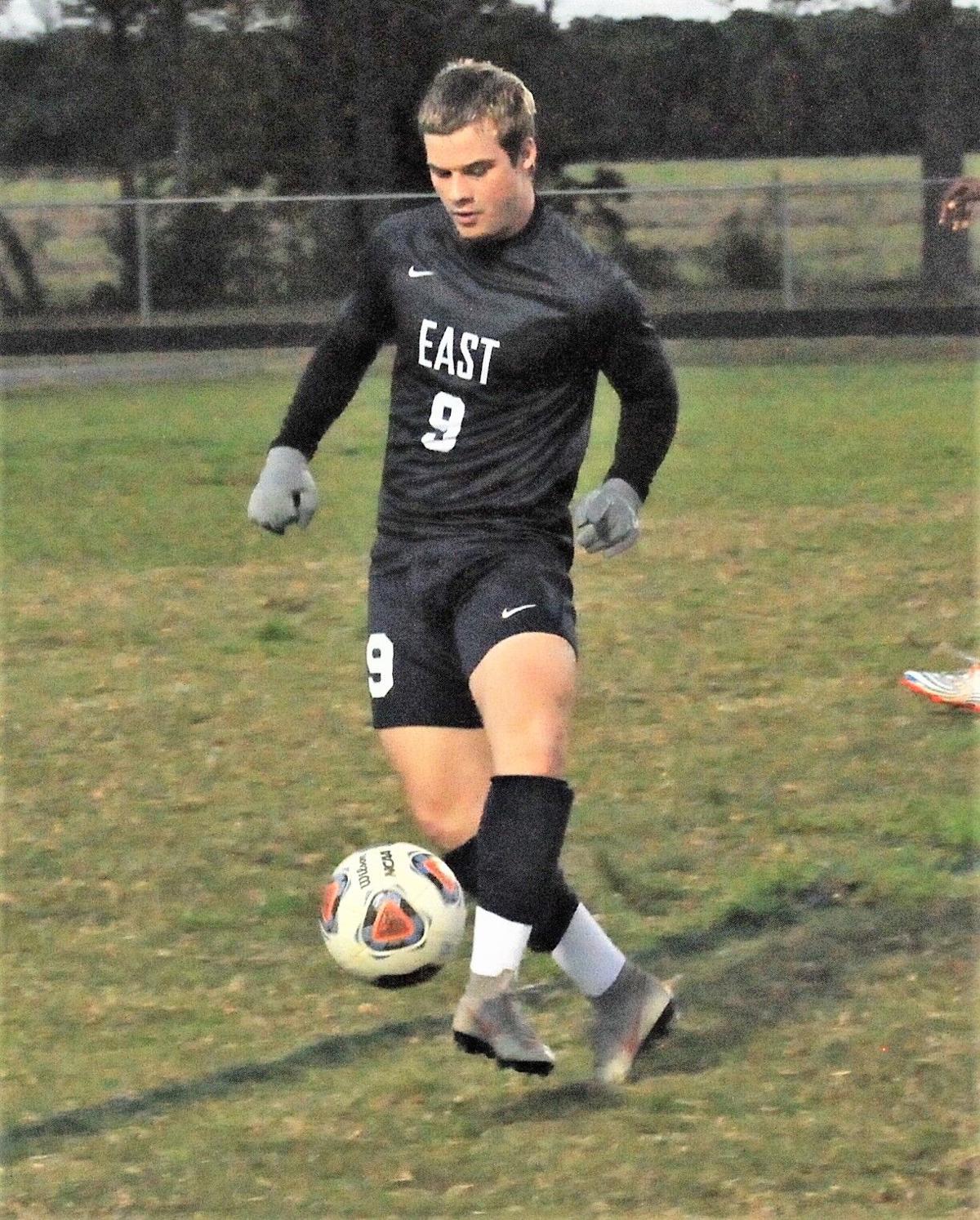 East Carteret’s Jacob Mackey has an assist in the 3-2 win over Farmville Central. (J.J. Smith photo)

East Carteret’s Jacob Mackey has an assist in the 3-2 win over Farmville Central. (J.J. Smith photo)

BEAUFORT — The Mariners went 2-8-1 in the regular season with both victories coming over a winless Lejeune squad.

They didn’t look like a team with that résumé in the 2A first-round boys soccer matchup with Farmville Central.

No. 10 seed East Carteret (now 3-8-1) overcame a 1-0 halftime deficit with three goals in a five-minute span to advance to the second round. The Mariners entered the game ranked 42nd out of 50 teams in the N.C. High School Athletic Association 2A RPI while the Jaguars were 21st.

“I think we have exceeded expectations,” coach Antonio Diaz said with a laugh. “Games like tonight is why you coach. Tonight, finally, we clicked.”

The Mariners won their first playoff game since 2016, and the magnitude of the moment was not lost on some.

“All I can say is right now I have two four-year captains crying tears of joy,” Diaz said. “I’m so happy for them.”

Evan Fullwood and Logan Pilcher have been contributors since the first game of their freshman year. Coming into the first-round playoff contest, East had gone 8-39-2 in their four years.

The Mariners haven’t finished above .500 since 2016 and hadn’t won more than five games in a season in the final five campaigns.

“I told the kids this was an opportunity, and we had to take it,” Diaz said.

No. 23 seed Farmville Central (7-8-1) can sympathize with East’s struggle.

The Jaguars were in the playoffs for just the second time in program history and the first time since 2009. Coming into this season, they had finished .500 just once in the previous eight seasons, going 32-98-5 over that span.

“We came in really not expecting what was going to happen,” assistant coach Adrian Atkins said in place of head coach Ron Denham. “I thought the guys played a good game, played a good team. We wish them well in the next round.”

Farmville Central looked in the first half like it might be the team moving on to the next round after holding a 7-0 advantage in corner kicks and a 7-5 edge in shots on goal. The Jaguars controlled possession and scored with five minutes left in the half when Juilian Argomaniz found Jimmy Garcia in front of the net on a cross.

“We started really shaky,” Diaz said. “Those first 20 minutes, they had so many corner kicks. I was a little concerned.”

East junior keeper Wyatt Nowacek bailed out his team time and again, coming up with five saves in the first 26 minutes of play. Junior defender Chris Herrera and freshman defender Liam Harding also stood out on the backline.

Despite the lopsided possession, East had a few long runs and chances to find the back of the net with Jacob Nelson scoring before getting called offside and the ball bouncing off the post following a save attempt on a Pilcher shot.

“We could have scored, and at halftime. it could have been any score,” Diaz said. “We were finding the channels, the spaces to pass the ball, and we knew it was going to happen.”

The second half was a much different game with East outshooting the visitors 4-2 over the final 40 minutes.

“Little by little, we found our place on the field,” Diaz said. “We started making the right passes to our runners. It always helps when you have very physical and aggressive guys like Charles (Matheka) and Jacob. They have a drive to win and helped us tremendously.”

Matheka hit the equalizer 10 minutes into the second frame, and Nelson scored in the same minute on an assist from Jacob Mackey. Nelson then scored five minutes later, and it was suddenly 3-1.

“We started off strong, but we got a little bit confused at the end, a little mixed up,” Atkins said. “We have seven freshmen on the team, so we have a lot to grow with. I think it was nerves and inexperienced players. And sometimes I think the intimidation factor got in there. They were a much bigger team with juniors and seniors. We’ll learn from it, get better.”

The Mariners controlled possession in the second half until a late push from the Jaguars gave them three corner kicks in the final 21 minutes and a goal from Nick Reida with 46 seconds left on the clock.

The Mariners have played Spring Creek three times in the past seven years, falling 5-2 in both 2019 and 2015 in regular season play. They got past the Gators 2-0 in the third round of the playoffs in 2014.

“At least we know their style,” Diaz said. “They are good. They’re predominantly a Latino team, so they always have good footwork.”