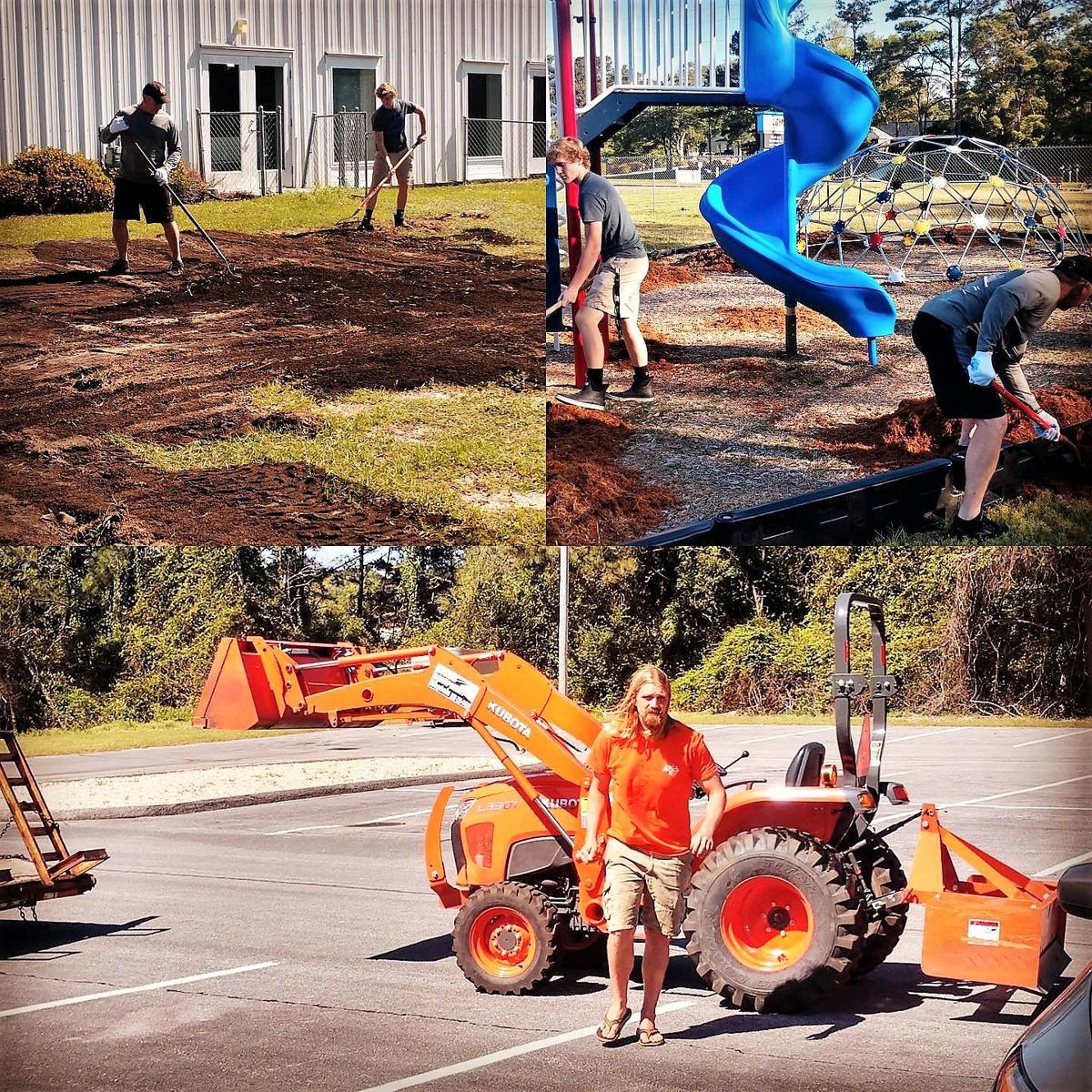 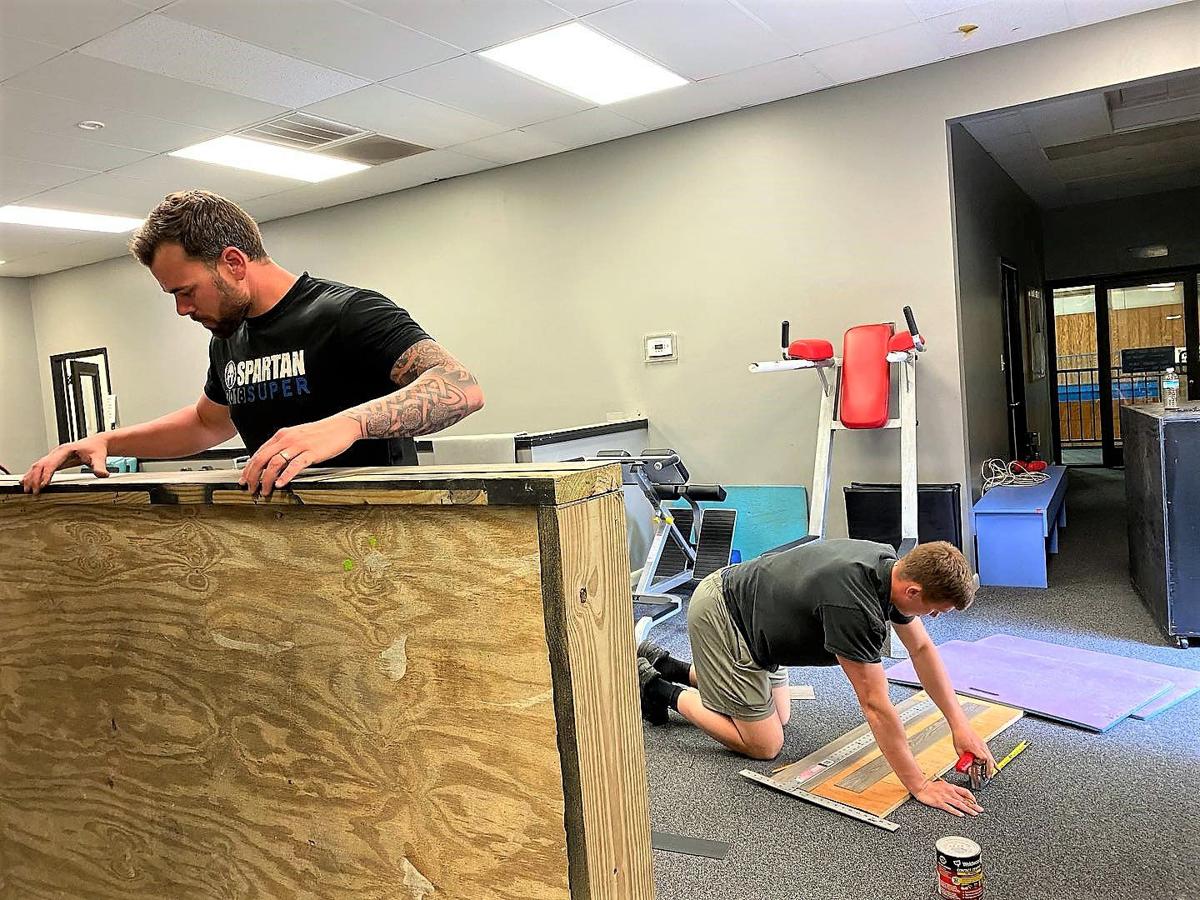 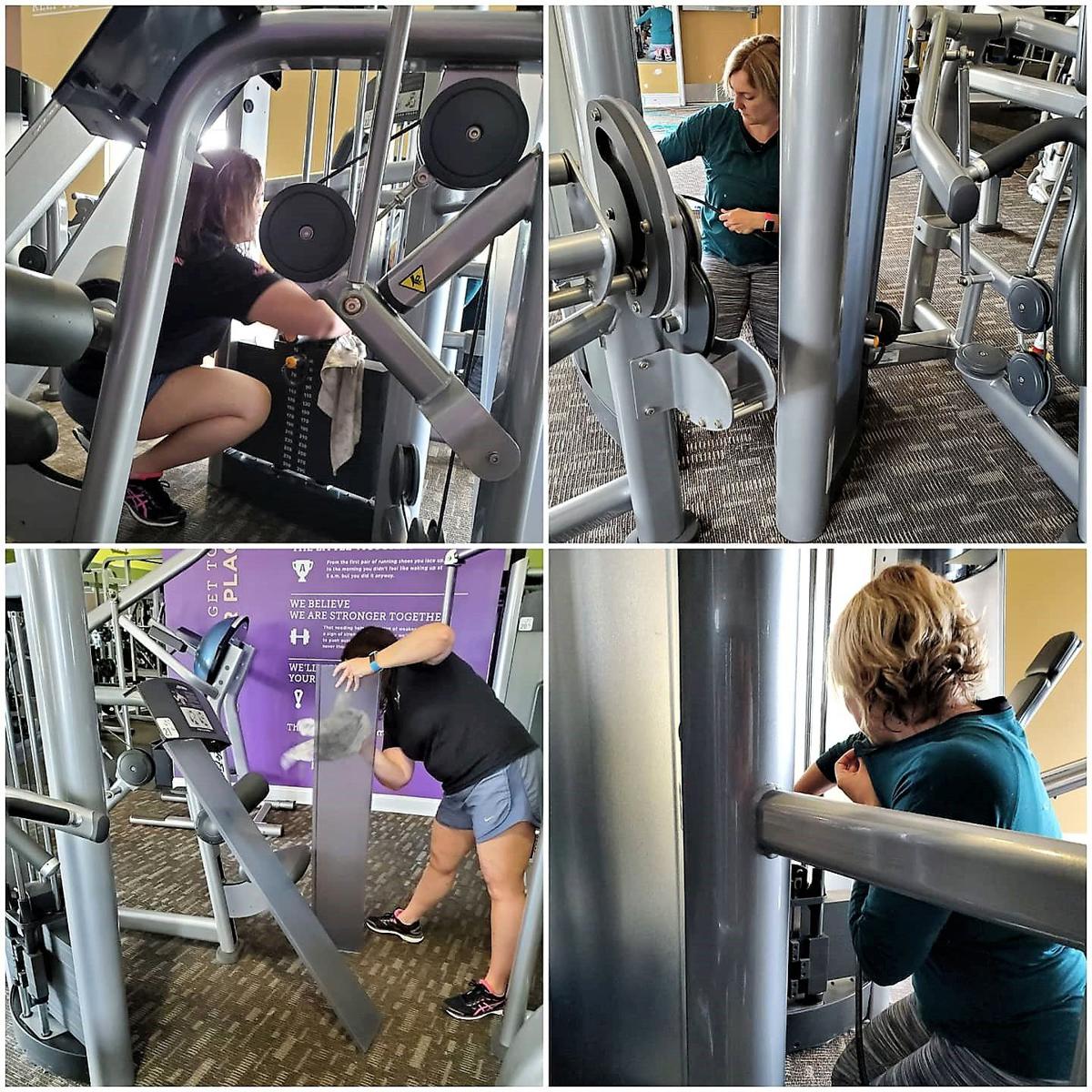 Employees of Anytime Fitness in Morehead City give their facility’s equipment a deep cleaning during downtime from COVID-19. (Contributed photo)

Employees of Anytime Fitness in Morehead City give their facility’s equipment a deep cleaning during downtime from COVID-19. (Contributed photo)

MOREHEAD CITY — Phase 2 of N.C. Gov. Roy Cooper’s coronavirus restrictions easing is calling to keep the state’s gyms closed, despite extensive preparations for the opposite.

Owners and operators of Sports Center of Morehead City, Anytime Fitness of Morehead City and The GYM at Cape Carteret Aquatic Center were all anticipating opening Friday when the next phase of re-openings was slated to take effect.

There was unmistakable dissatisfaction by the businesses and their patrons Wednesday when a press release from the governor’s office precluded the opening of the state’s health clubs and gyms during Phase 2, expected to last at least five weeks.

“I am very disappointed in the decision,” Sports Center Director Paul Gillikin said. “We feel that the health benefits of regular exercise far outweigh any potential risk. In addition, we feel that the risk of coming in the Sports Center is no more than going to your local market or home improvement store. We can’t understand the governor’s position on this.”

Fitness centers, gyms and health clubs have already seen a total loss in revenue for the month of April and majority of May, a period of time that could now stretch through June, but The GYM owner Deanna McElmon says the statewide demand to open these facilities isn’t about the revenue.

“I have to open,” she said Wednesday prior to the announcement. “It’s time. I’ve got people who are hurting both physically and mentally. We are doing the online stuff and people are still bonding, but they want to be back in the building. There are people who are still uncomfortable, and until they are comfortable going out in public and separating fear from fiction, they’re not going to be here. And we want them to feel comfortable and come when they’re ready.”

Per the press release, restaurants, personal care businesses (such as salons and barbers), pools, childcare facilities and retail businesses were green-lit to fully open at 50 percent capacity, while gyms were ordered to remain closed, along with bars and nightclubs, playgrounds, movie theaters and bowling alleys.

McElmon, however, has found a loophole.

“I’m opening,” she said. “But I can do that because I have an indoor pool. So, I’m open for business.”

On social media, people, including gym members, expressed disappointment in the governor’s decision. Overnight, the Facebook page “Reopen NC’s Health Clubs” ballooned to over 1,000 members including more than 150 gym owners as of Thursday afternoon, with the group looking to confront the governor of the decision and seeking legal representation for a class-action lawsuit.

One of the people spearheading that movement is Todd Dini, owner of Swansboro Health & Fitness.

“Everyone was planning on opening Friday, so it was pretty upsetting to find out the opposite two days before,” he said. “We’re talking to some lawyers and trying to figure out a way to get open. Five weeks is a long time to have to wait."

Phase 1 of the three-phase plan began May 8 and ran for two weeks. Now that Phase 2 is in place, Phase 3 is not expected to begin for at least five weeks.

There has also been a discussion about the differing sizes of gyms and fitness centers, with smaller facilities stressing their ability to more easily cater to social distancing. Anytime Fitness owner Jayme Limbaugh is one of those gym owners, frustrated that her business, which serves a smaller clientele base than others, was lumped in with all the rest.

“It’s disappointing,” she said, “that we smaller-footprint gyms, which can easily practice safe distancing and offer wellness services such as physical therapy and rehab training, are put in the same category.”

There was a general shock when the announcement was made Wednesday, with all owners and operators feeling certain that the wave of re-openings would include their businesses. McElmon even held an open house Wednesday to show her members the cleanliness and distancing precautions already put into place.

“We had people come in and look at the gym so they feel comfortable,” she said. “We did tutorials on social distancing and disinfecting things, answering questions and addressing any concerns. We would never do anything to jeopardize our health or the health of our members. We all have families and people we care about. But I think we all also recognize that it’s time to live.”

All of the facilities have seen a slight drop in clientele as people weigh their own comfort levels in reentering non-essential public spaces. The quarantine period has had a universal effect on fitness routines, while the comforts of remaining home and snacking during that time have also raised interest in health club membership.

“We’ve been fielding lots of calls of people who want to join,” McElmon said, “those who have seen our classes online and like what we do and have that ‘quarantine fifteen.’”

At Anytime Fitness, weekly passes for vacationers and business travelers is a common occurrence, but that will change at the outset of the business’ reopening as a safeguard.

“I do think we’re going to have an influx of local people, but I also think we’re going to see a lot of out-of-towners,” Limbaugh said. “So, for the time being, we’re not offering weekly passes. We’re offering month passes, in hopes that people just passing through aren’t coming in without knowing how their health has been affected. It’s just not worth it to put our regular members at risk for week-long passes.”

Most fitness facilities, the three here included, have spent the last two months deep-cleaning equipment and implementing measures to assist their member base with a socially-distanced style of exercising.

“During the downtime, we actually took apart and cleaned every single piece of equipment in the gym,” Limbaugh said. “I can’t wait for everyone to see it and come back and feel safe. We’ve also upgraded all of our spray bottles to medical grade, and there is a spray bottle at every piece of workout equipment throughout the room.”

At The GYM, every other piece of cardio equipment has been disconnected and the odd one out used as a cleaning station. Members will be required to use the cleaning station prior to and after each use of its adjacent piece of equipment. Aerobic classes will be held on the basketball court, with attendees accessing a separate entryway from the main gym entrance. The classes themselves have been cut 60 percent.

“For our seniors,” McElmon said, “we’re setting up all the equipment so that when they come in, everything is set up, and when they’re done, it gets put back and disinfected for the next class.”

At the Sports Center, equipment has been moved around to create 6 feet of separation, while spaces that could not accommodate that are also seeing every other piece of equipment disconnected. Like the other two facilities, it will utilize yellow tape on the floor and signage instructing members on staying appropriately apart.

“There hasn’t been a lot of guidance from the state on what are the expectations,” Gillikin said. “We’re so big square-footage wise, and we don’t know what the capacity allowed will be. On a normal day, we probably don’t go over 50 percent at any point, so I’m not worried about that. I think the biggest thing that will affect us is people allowed per square foot. We’ll likely have signs up instructing folks on how many are allowed to a room and so forth, with staff to enforce it.”

Pools will operate as usual when they are opened to the owners’ discretions, but members can anticipate limits on the number of people allowed in adjacent facilities.

“Social distancing is pretty easy in a 3,000 square foot pool,” McElmon said. “We’re just going to turn the chlorine on. The sauna and steam room, however, are both closet-sized, so it didn’t make sense for us to open that up.”

When it opens, Sports Center will allow only one member at a time in the sauna and the steam room, while two apiece will be allowed in the hot tub and the spa.

All three facilities will promote alternation of the individual pieces of equipment, but members can expect trainers to be in short supply.

“We have a lot more people interested in personal training because they feel more comfortable going one-on-one rather than train in a group,” McElmon said. “Plus, our trainers have been able to connect with new people virtually so that they are comfortable with them before they come in.”

In addition to cleaning and moving equipment, the businesses have used the downtime to spruce up their existing facilities and make simple renovations such as painting and re-lighting. The GYM put in a new outdoor playground, while the Sports Center rebuilt its popular Performance Zone.

“There was a window that was starting to crack, so this was a good excuse to kind of rebuild the entire thing,” Gillikin said. “I think people will be pleased with the aesthetic changes we’ve made. We wanted the place to look fresh when we come back.”

Both the Sports Center and The GYM also hosted blood drives during the downtime.

Each phase of the governor’s plan to reopen the state’s businesses and facilities has been purposeful flexible, leaving the three owners, along with many others, in a state of uncertainty. The phone at all three businesses has been ringing off the hook, and that will likely continue as members push to recontinue their routines.

“They’re stoked to come back,” Limbaugh said. “Our clientele is wonderful, and we’re confident they will all be happy with the changes we’ve had to make. We’ve been doing online virtual classes, which have been really popular, but everyone has been pressing to find out when exactly we’re opening the physical facility.”