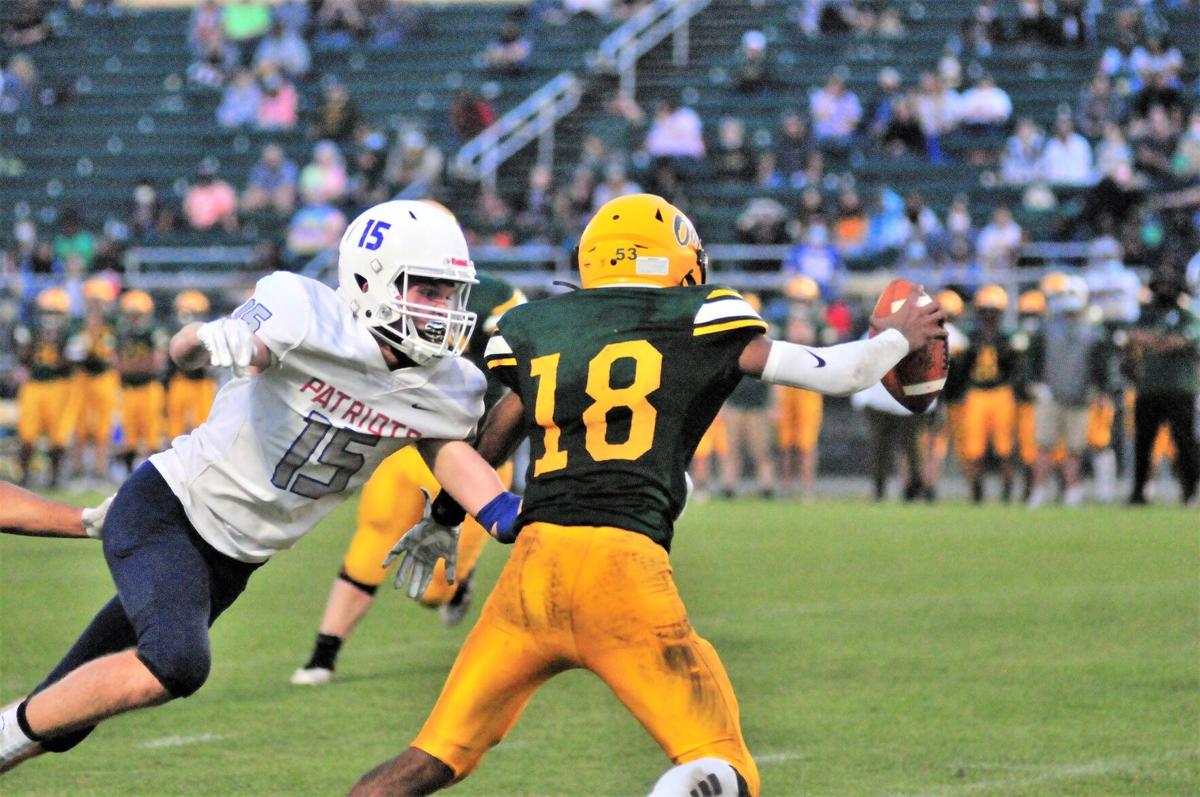 West Carteret’s Shane Graves puts pressure on White Oak quarterback Sydney Lee Friday in the win over the Vikings. Graves played both defense and offense, racking up three tackles and three catches for 77 yards and a score. (Zack Nally photo) 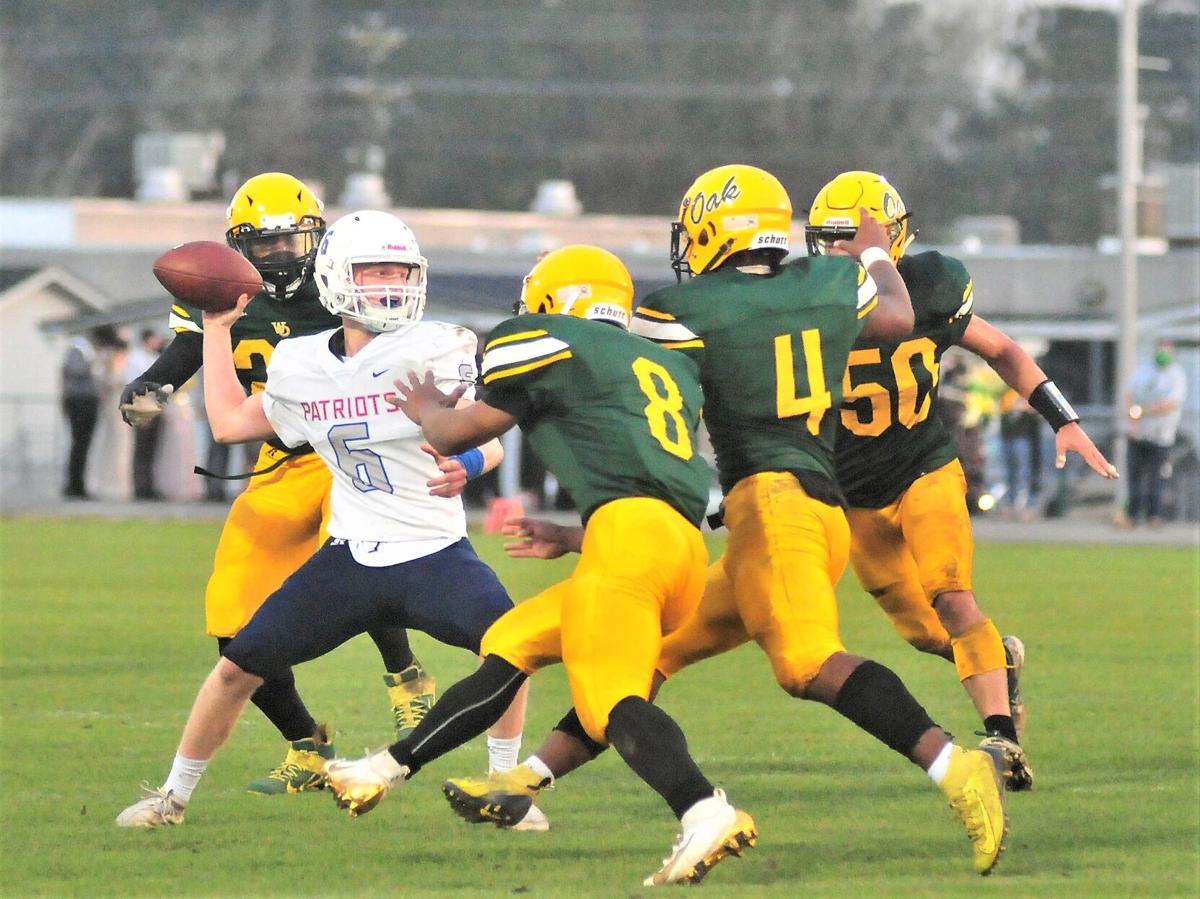 Patriot quarterback Jaiden Rittenhouse stands strong under pressure Friday in the win over the Vikings. He completed 4 of his 7 passes for 98 yards and a touchdown and ran twice for 28 yards. (Zack Nally photo) 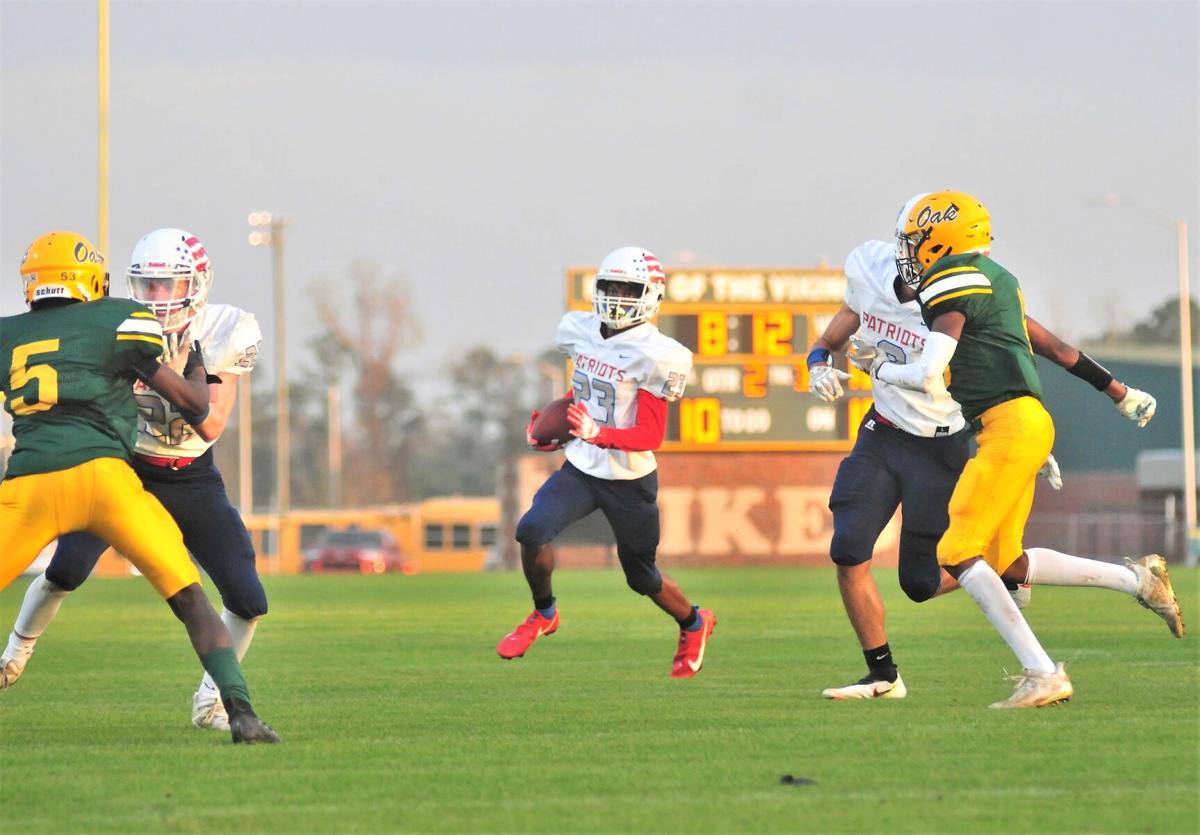 West Carteret’s J.J. Montford runs through a gap for one of his three runs for 23 yards. He also caught a 4-yard touchdown and anchored the secondary to shut down White Oak’s passing game. (Zack Nally photo)

West Carteret’s Shane Graves puts pressure on White Oak quarterback Sydney Lee Friday in the win over the Vikings. Graves played both defense and offense, racking up three tackles and three catches for 77 yards and a score. (Zack Nally photo)

Patriot quarterback Jaiden Rittenhouse stands strong under pressure Friday in the win over the Vikings. He completed 4 of his 7 passes for 98 yards and a touchdown and ran twice for 28 yards. (Zack Nally photo)

West Carteret’s J.J. Montford runs through a gap for one of his three runs for 23 yards. He also caught a 4-yard touchdown and anchored the secondary to shut down White Oak’s passing game. (Zack Nally photo)

MOREHEAD CITY — A balanced offense and a shutdown defense paved the way for West Carteret’s 36-0 victory at White Oak on Friday.

The Patriots rushed for 162 yards, passed for 153 and held the Vikings to 155 total yards for their first shutout of the season. The goose egg was impressive, too, considering White Oak came into the game averaging more than four touchdowns an outing.

The win moved West to 3-2 overall and 3-1 in the 3A Coastal Conference. The Patriots, who are favored over end-of-regular-season opponents Northside-Jacksonville and Swansboro, look primed to win out, finish 5-1 in the conference and snag one of the handful of wild-card spots in the state playoffs.

“We still have a long way to go, we’re not thinking about playoffs yet,” Barrow said. “It’s something we want to get to, but we’re just focused on Northside right now.”

West fans got a double dose of solid quarterback play against the Vikings (0-5), with Jaiden Rittenhouse taking the lion’s share of snaps and Ethan McLaughlin stepping in the pocket sparingly as he looks to recover from a broken arm.

Rittenhouse went 4-of-7 for 98 yards and rushed twice for 28 yards. He scored the game’s first touchdown with a 31-yard scoring throw to running back C.J. Rocci.

McLaughlin, who stepped in under center every third possession, finished 5-of-7 for 55 yards and a 4-yard touchdown toss to J.J. Montford.

“You’re not usually blessed with two quarterbacks like we are,” Barrow said. “A lot of teams would kill for just one of them. They both threw the ball and ran the offense well.”

McLaughlin started at the beginning of the season and broke his arm week two against Rosewood. Rittenhouse got his first start in a 62-13 loss to Havelock before leading the Patriots to a pivotal 24-19 victory over Jacksonville on March 19.

The two are poised to continue competing for snaps, but they don’t mind the friendly rivalry.

“We’re both playing pretty good right now,” Rittenhouse said. “We both scored touchdowns tonight, which is good because we’re both pretty competitive.”

McLaughlin added, “I think it’s fun. It’s my first week back, and I liked having the rest. Ethan played well tonight, too. It’s some added competition between us, which is cool.”

With the defense keeping White Oak’s anemic offense at bay, the West offense had room to work with all night. The second possession of the night resulted in a missed 36-yard field goal attempt from Brock Tatalovich, but the third drive got points with a 1-yard run from C.J. Rocci, set up by a 43-yard pass from Rittenhouse to Spencer Maxwell.

Rocci was having a solid night in the backfield with 10 rushes for 46 yards and had an impact in the passing game with two catches for 32 yards, but he suffered a knee injury in the third quarter and sat out the rest of the game with his team already up 29-0.

“When your best player goes out, you hope you have a comfortable lead,” Barrow said. “But we got this win and now next week is the priority. We want him to come back when he’s healthy, but it’s hard because he’s a big-time player for us.”

West forced a White Oak safety on the Vikings’ next possession, and Mike Goodrick returned the ball 40 yards to set up a 5-yard rushing touchdown from Rittenhouse.

The Vikings picked off Rittenhouse on the next drive and got a good return out of it, but penalties drove the offense all the way back to the White Oak 8-yard line. The Vikings punted short, and McLaughlin made them pay with the 4-yard strike to Montford.

“Coming back in, I was just trying to get a feel for it,” McLaughlin said. “Hats off to the offensive line, too. They make it happen for us, as well as the receivers.”

Montford also ran three times for 23 yards and anchored the secondary as it limited White Oak quarterback Sidney Lee to 5-of-18 passing. Montford had three straight pass breakups during a string of six straight incompletions for Lee.

He was in on the coverage to start the second half, too, when White Oak ticked more than seven minutes off the clock with a 12-play, 31-yard drive that resulted in a turnover on downs on fourth-and-one.

Starting on their own 34-yard line, the Patriots answered with their longest drive of the night, resulting in a 29-yard pass from Rittenhouse to Shane Graves. The point-after kick gave West its final 36-0 lead.

“It was a great route from Ethan,” Rittenhouse said. “I thought we played good tonight, especially with Ethan coming back for his first week back. Scoring almost 40 points isn’t bad.”

Only 23 Patriots dressed for the game as West continues to struggle with injuries. On top of that, the jayvee team was forced to go into COVID-19 quarantine but is expected to be out of the protocol by Friday’s homecoming game against Northside.

Goodrick, who took over in the backfield after Rocci’s injury, led the ground attack with 53 yards on eight carries. Graves was the offense’s leading receiver with 77 yards on three catches.

Ethan Chambers had one sack on defense, and Graves pressured Lee into a penalty that resulted in a White Oak safety.

White Oak’s leading rusher was Lee with 11 carries for 78 yards. Lee also threw for 55 yards, and his leading receiver was Jazavian Bell with three catches for 32 yards.

The Vikings will host Jacksonville on Thursday.