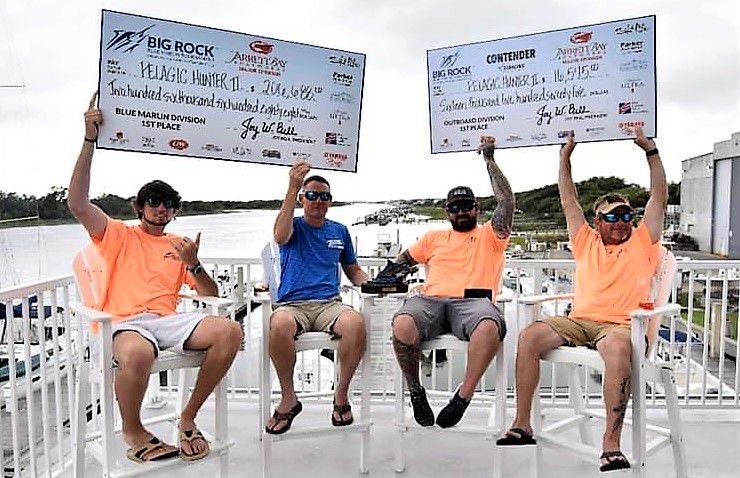 The crew of the Pelagic Hunter II, a 35-foot Contender, celebrate winning the 62nd annual Big Rock Blue Marlin Tournament with a 495.2-pound blue marlin. The fish beat out two other catches within a pound. (Contributed photo) 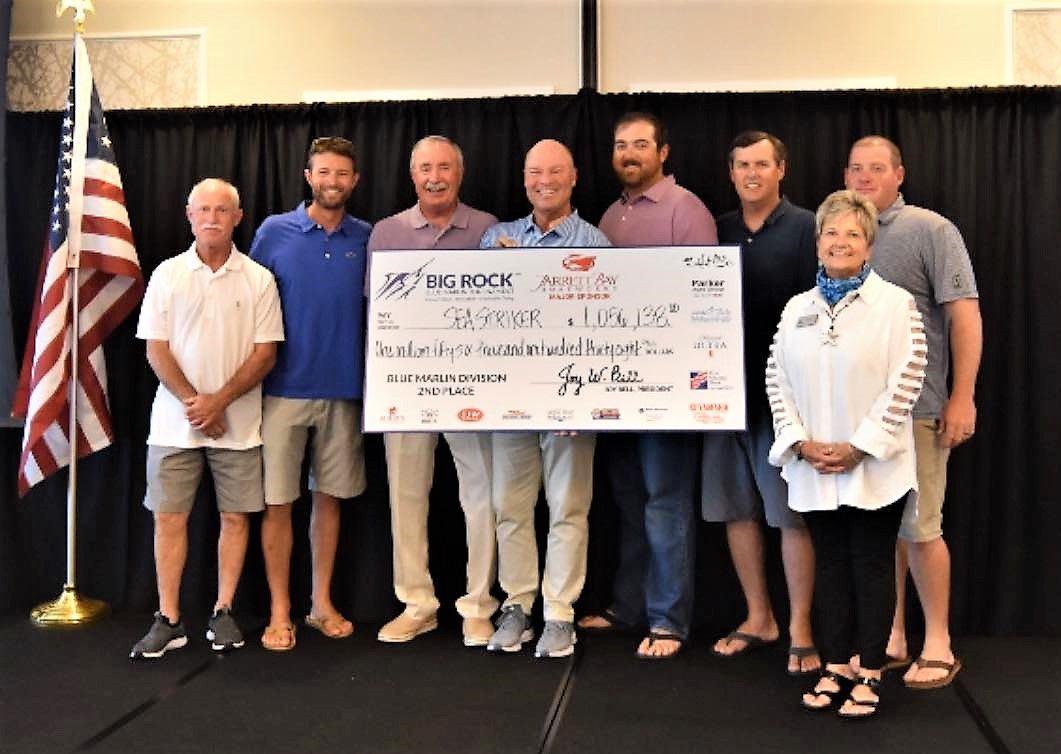 The crew of Sea Striker pose with a check for $1,056,138, the biggest payout of this year’s competition. The boat weighed a 495-pound blue marlin on the last day of the tournament, good for second place. (Contributed photo) 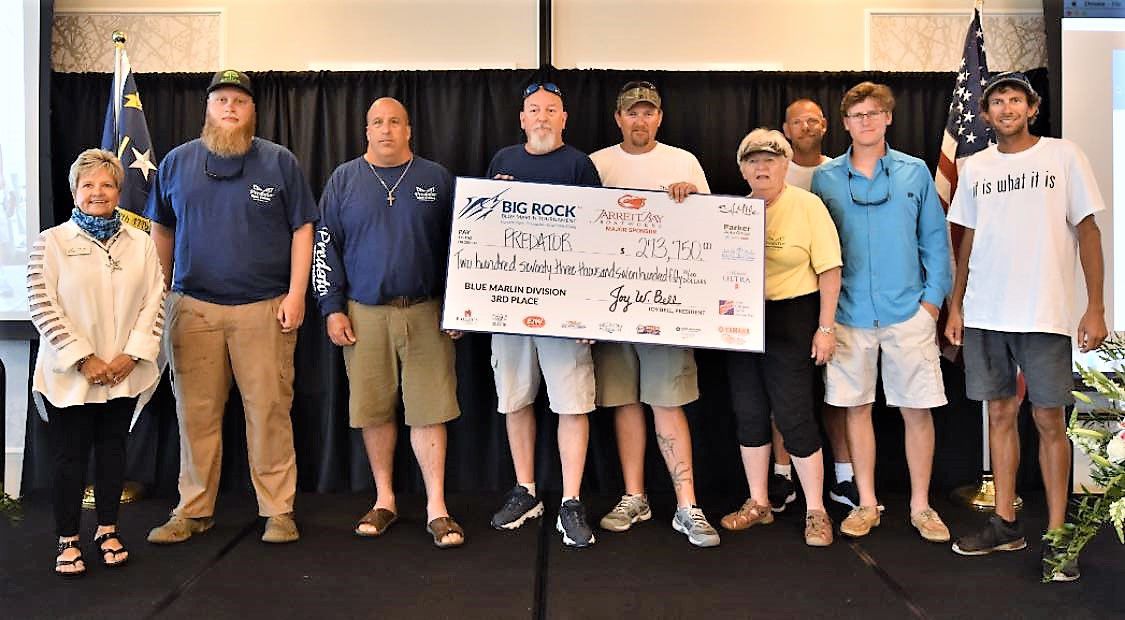 The crew of Predator pose with a check for $273,750 after placing third in this year’s competition with a 494.2-poudn blue marlin (Contributed photo)

The crew of the Pelagic Hunter II, a 35-foot Contender, celebrate winning the 62nd annual Big Rock Blue Marlin Tournament with a 495.2-pound blue marlin. The fish beat out two other catches within a pound. (Contributed photo)

The crew of Sea Striker pose with a check for $1,056,138, the biggest payout of this year’s competition. The boat weighed a 495-pound blue marlin on the last day of the tournament, good for second place. (Contributed photo)

The crew of Predator pose with a check for $273,750 after placing third in this year’s competition with a 494.2-poudn blue marlin (Contributed photo)

Capt. John Cruise III and his crew aboard the Pelagic Hunter II from Sneads Ferry rocked the weigh station on day five of the tournament with a 495.2-pound blue marlin reeled in by Riley Adkins of Wilmington.

“We’re on cloud nine,” Cruise said on the docks Friday. The News-Times spoke to Cruise on Monday after the news was official. There was no awards ceremony this year in response to concerns over the novel coronavirus.

“We’re still on cloud nine,” Cruise said. “We came back home to Sneads Ferry last night and we’re settling in now, but we’re still in shock. We’re just so happy and so fortunate. What an awesome week it was.”

Cruise captained his 35-foot Contender in the tournament, becoming one of a very small group of Big Rock winners with a center console boat. The first boat to do it was Dr. “Doc” Leroy Allen in 1962 on Sea Hag. Allen singlehandedly caught a 487-pound fish and towed it home alongside the boat to win that year’s competition, which was known then as the Fabulous Fisherman’s Blue Marlin Tournament.

“To be on the wall with those legends and to know all of the hard work that we put in it, it’s so awesome,” Cruise said. “We were so fortunate to be out there fishing with some of these bigger boats. To know that we’re on that list forever is amazing.”

There was initial confusion on the docks Friday when Pelagic Hunter II’s fish was weighed. There was palpable anticipation all week for the first blue marlin weighing 500 pounds or more, which would have won captain and crew the $552,500 Level V Fabulous Fisherman’s prize. When the weight was announced, audible celebration was minimal until tournament organizers announced that it was actually the current first-place fish.

“We were actually concerned it wasn’t over 400 pounds since it was under 110 inches when we measured it,” Cruise said. “We weren’t even aware who or what weight was leading at that point. It had been a really busy couple of days with virtually no sleep. So, when they told us the weight, we started celebrating because it was over the minimum weight. Then they told us it was the first-place fish and there was some shock.”

The Pelagic Hunter II beat out two other boats by no more than a pound separating the entire podium. Sea Striker of Morehead City weighed a 495-pound blue marlin on Saturday reeled in by two-time Big Rock winner Capt. Adrian Holler and angler Jon Henry. On Monday, June 8, the first day of the tournament, Predator of Hatteras grabbed an early lead with a 494.2-pound fish reeled in by Capt. Chris Barnett and angler Gene Olmo that wound up placing third.

This year’s Big Rock offered up a record $3,343,975 purse, but the payouts to podium boats differed greatly. The tournament is comprised of different levels, each with their own entry fee and payout. Level I is required, but the rest are voluntary, save for the Level IX Outboard Division which is mandatory for outboard boats.

In 2019, to enter all levels, boats paid out a whopping $27,500 in entry fees. An effort to obtain possible changes in this year’s numbers was unsuccessful.

Cruise isn’t concerned with the payday that “could have been,” and he’s still proud of his boat’s victory over other, larger vessels that are often worth more than $1 million.

“There’s a huge disadvantage to being in a center console,” Cruise said. “We can’t run nearly as many lines out, and our technology doesn’t come close to what’s on some of these multi-million-dollar boats.”

The bite all week was an active one with 14 blue marlin coming to the weigh station and a tournament-record 180 releases, eight more than the previous record of 172 set in 2007.

There was a 15th blue marlin in play when Moon Dancer boated one late Saturday, but the boat blew an oil pump on the way back to port and eventually conceded the tournament with measurements concluding its catch would very likely not make the leaderboard.

The Big Rock had a few fun family moments during the week. Hatter-Done featured a father-son pairing in Capt. Chris Daniels and his son, angler Jason Daniels. On Saturday, the weigh station got a full dose of the Henry family with two brothers – Capt. Parker Henry of Double B and Sea Striker angler Jon Henry. Father Keith Henry was also aboard Sea Striker for its catch.

The crowd at the weigh station never got its marquee Fabulous Fisherman’s moment, with the “big check” worth $552,500 ever-present at the docks. That doesn’t mean the money went unclaimed, though. Ft. Pierce, Fla.-based Lo Que Sea, the weekly release division leader with 2,250 points and captained Garrett Yarbrough, was already going to walk away with a tidy sum of $151,937 in weekly release prizes, in addition to the $47,813 it pocketed for the Tuesday daily release prize.

However, tournament rules dictate that if the Fabulous Fisherman’s prize goes unclaimed, the boat entered in the Level V division with the most release points will take home the payout. That means Lo Que Sea earned a whopping $752,250 in total prizes.

Singularis lasted the week with the winning dolphin weighing 55.2 pounds, reeled in by Zac Yarbrough on Tuesday, June 2. The hefty fish earned the boat a $395,250 payout.

C-Escape ran away with the heaviest wahoo division with a 75.2-pounder from angler Randy Britt to earn the boat $5,000 in prizes.

There were no tuna weighed throughout the week.

The second-smallest fish of the tournament produced the biggest moment when Catch 23 boated a blue marlin and arrived at the weigh station with owner and NBA legend Michael Jordan on board. The Charlotte Hornets principal owner embraced his friend, tournament official and World Golf Hall of Famer Curtis Strange and waved at the crowd before posing with his team and the blue marlin.

This year’s competition was also a strange one considering the changes due to COVID-19. The tournament made its in-person events virtual and discouraged crowding at the docks with a barrier pushed 30 yards away from the scales. Security posted at the barrier encouraged viewers to disperse after fish were weighed.

There was also a substantial police presence on the docks all week, but the Morehead City Police Department declined to clarify the reason for it.