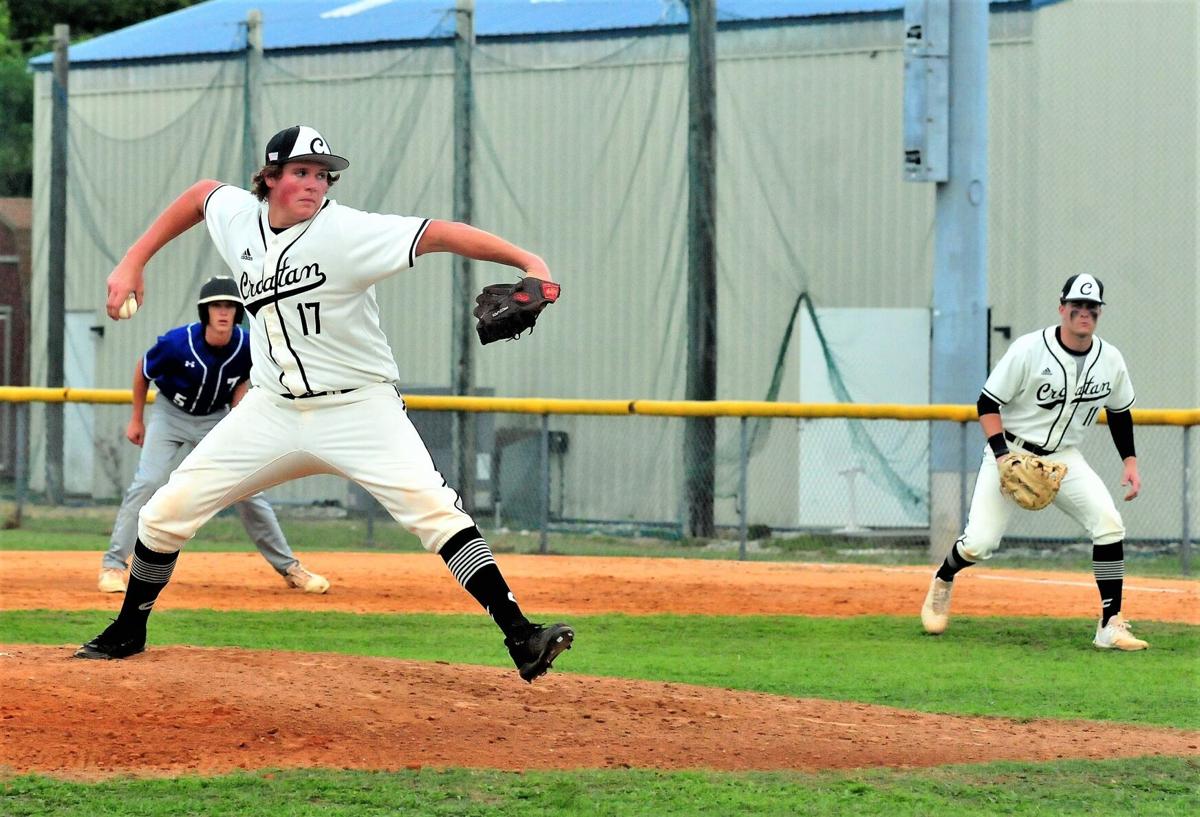 Croatan’s Sam Hoy pitches 4 2/3 innings and strikes out seven Tuesday in the 11-2 win over Heide Trask. The junior also hit 3-for-4 at the plate and scored a run. (Zack Nally photo) 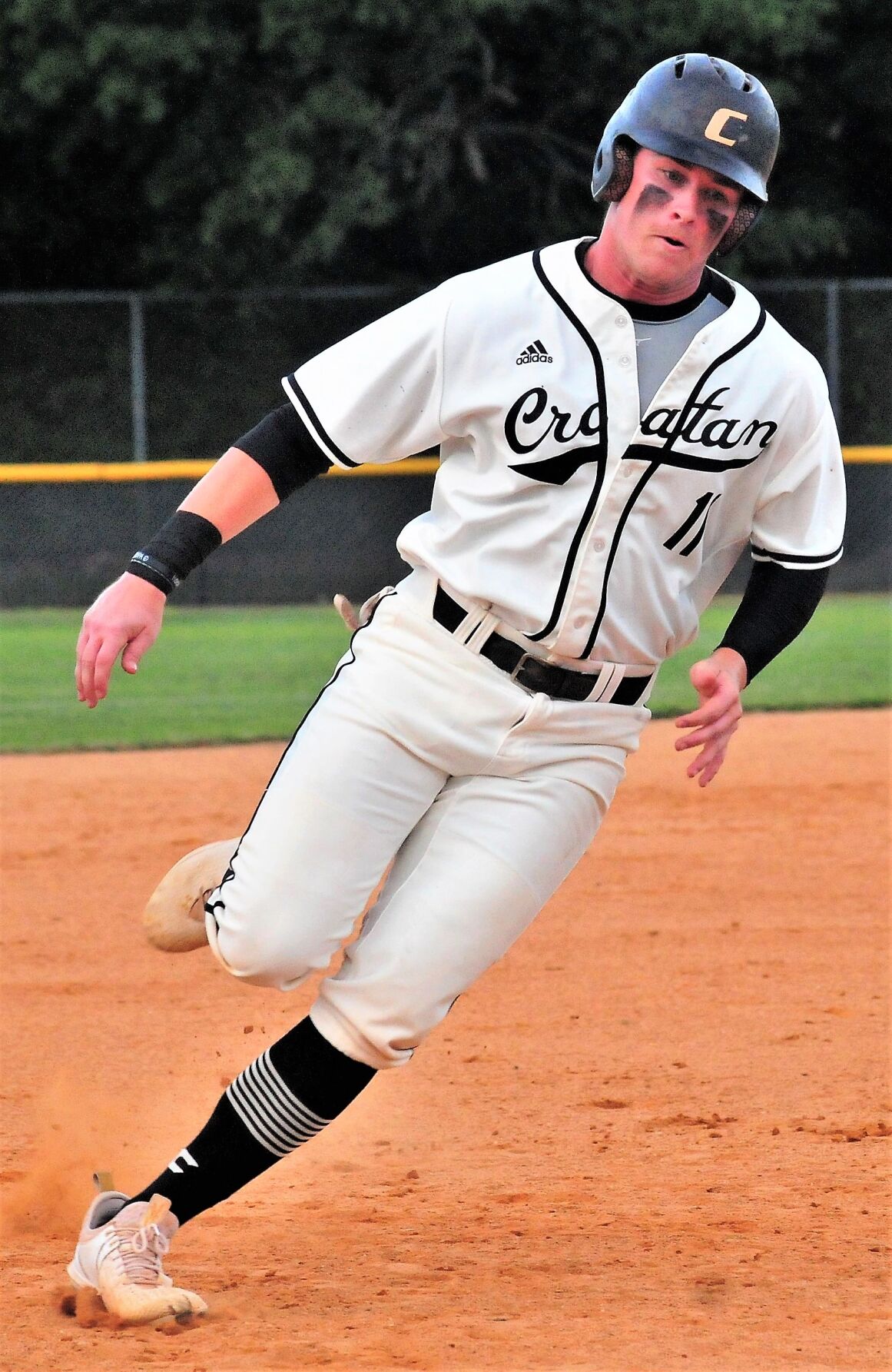 The Cougars’ Ryan Bellamy rounds third base for the last of his three runs Tuesday in the win over Heide Trask. (Zack Nally photo) 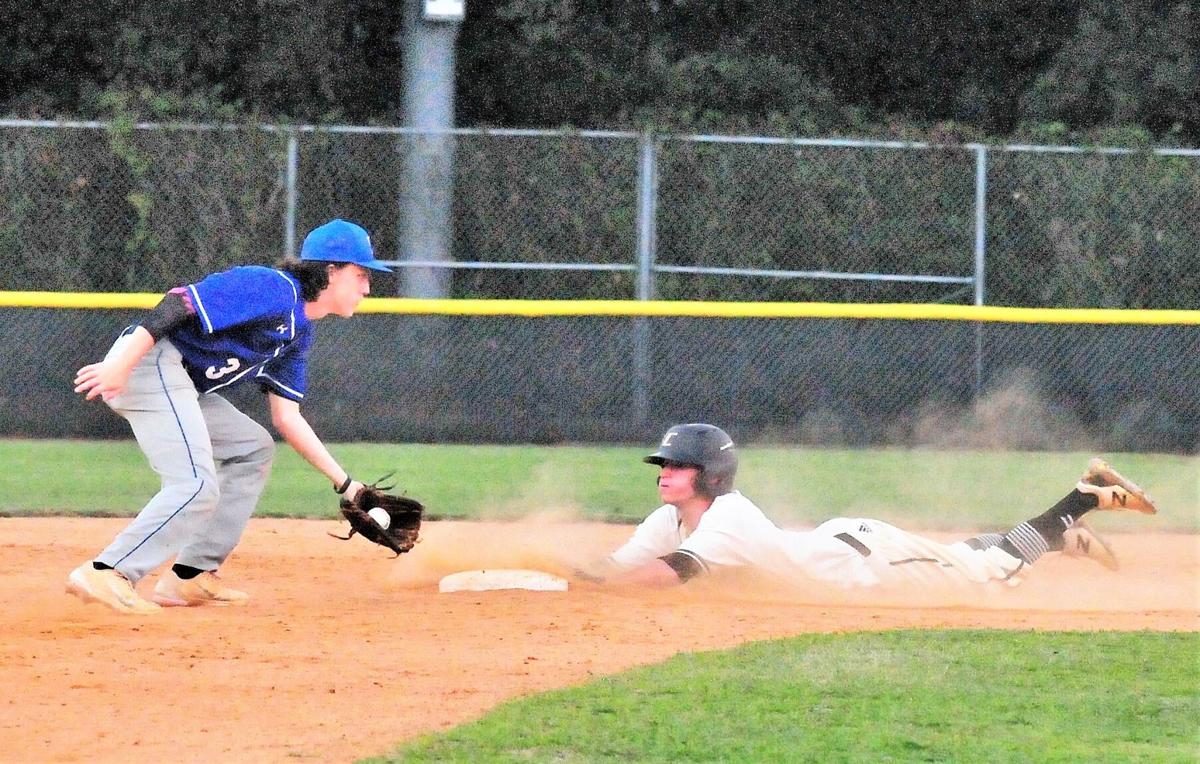 The Cougars’ Matthew McCray beats the throw to second base for the steal Tuesday in the win over Heide Trask. (Zack Nally photo)

Croatan’s Sam Hoy pitches 4 2/3 innings and strikes out seven Tuesday in the 11-2 win over Heide Trask. The junior also hit 3-for-4 at the plate and scored a run. (Zack Nally photo)

The Cougars’ Ryan Bellamy rounds third base for the last of his three runs Tuesday in the win over Heide Trask. (Zack Nally photo)

The Cougars’ Matthew McCray beats the throw to second base for the steal Tuesday in the win over Heide Trask. (Zack Nally photo)

OCEAN — Inside jokes and funny coincidences made for a relaxed evening on the diamond Tuesday in Croatan’s 11-2 win over Heide Trask.

The Cougars in the dugout yelled out “Cookie tote” when Bryce Cohen beat the tag to steal third in the sixth inning. The pinch-runner, who has a love for cookies, got to jog home on a single from Sam Hoy for his second run of the night.

Hoy gave his team the last run of the night and a good laugh in the same inning when he bolted home from third on a wild pitch. The Trask catcher recovered and flipped a throw home, but the ball landed right in Hoy’s hand as he crossed the plate. No one knew for sure where the ball was until he flipped it over to the umpire, stunned as everyone else.

The nine-run win was just another night in the office for the undefeated Cougars (10-0), who have only played seven innings six times this season. They’re ranked No. 2 in the 2A classification by MaxPreps.com. and they have a solid hold on the 1A/2A Coastal 8 Conference with wins already in the books over second-place teams Southwest Onslow (8-2) and East Carteret (8-2).

After the game, the players gathered around a football-sized aggregate rock, and Cohen took a sledgehammer to it until it was broken up into small pieces. It’s a post-game tradition reserved for wins given to a standout player.

The Cougars out-hit the Titans (6-5) by a solid 11-7, but they only had three extra-base hits, all doubles. It was their first game in three without a homer and only the second game this season with less than four extra-base hits.

“We’ve done a good job this year of hitting with guys in scoring position,” Shaffer said. “We’ve kind of planted our flag on two-strike or two-out hitting. They did really well tonight. There weren’t a ton of hard balls hit, but they had timely hits when it mattered.”

Hoy had a strong night at the plate – he finished 3-for-4 – but he also started on the mound for the Cougars and got his second win of the season with a long outing of 4 2/3 innings.

“A lot of our games have been cut short,” Shaffer said, “and we have a lot of guys who can throw, so I think Sam only had six innings on the mound before tonight. we wanted to give him an extended outing. He did a good job and he wanted to stay in.”

The junior righthander struck out seven, walked three and only gave up one earned run. He dug himself out of a hole in the third inning with two strikeouts with bases loaded. He hit a batter to give up a run, but he didn’t in the fourth when bases got loaded again, and he struck out one batter and forced a flyout for the last out.

Trask scored its last run in the sixth inning with Phil Williams getting a base hit to score Colton Taylor for his second run of the night.

The loss on the mound went to Chase Patterson, who pitched five innings and gave up seven hits and three earned runs.

Croatan will be on the road Thursday at Richlands, followed by a home game against Dixon on Monday. The regular season will wrap up next week, but not before the Cougars could potentially snag the No. 1 spot in the rankings and get a comfortable position in the 2A state playoffs.

“I still don’t think we’ve played our best game,” Shaffer said. “They know that, too. When we’re doing one thing really well in a game, we’re falling short on another. We haven’t been able to put it all together just yet, but we’ll get there. We’ll keep grinding.”