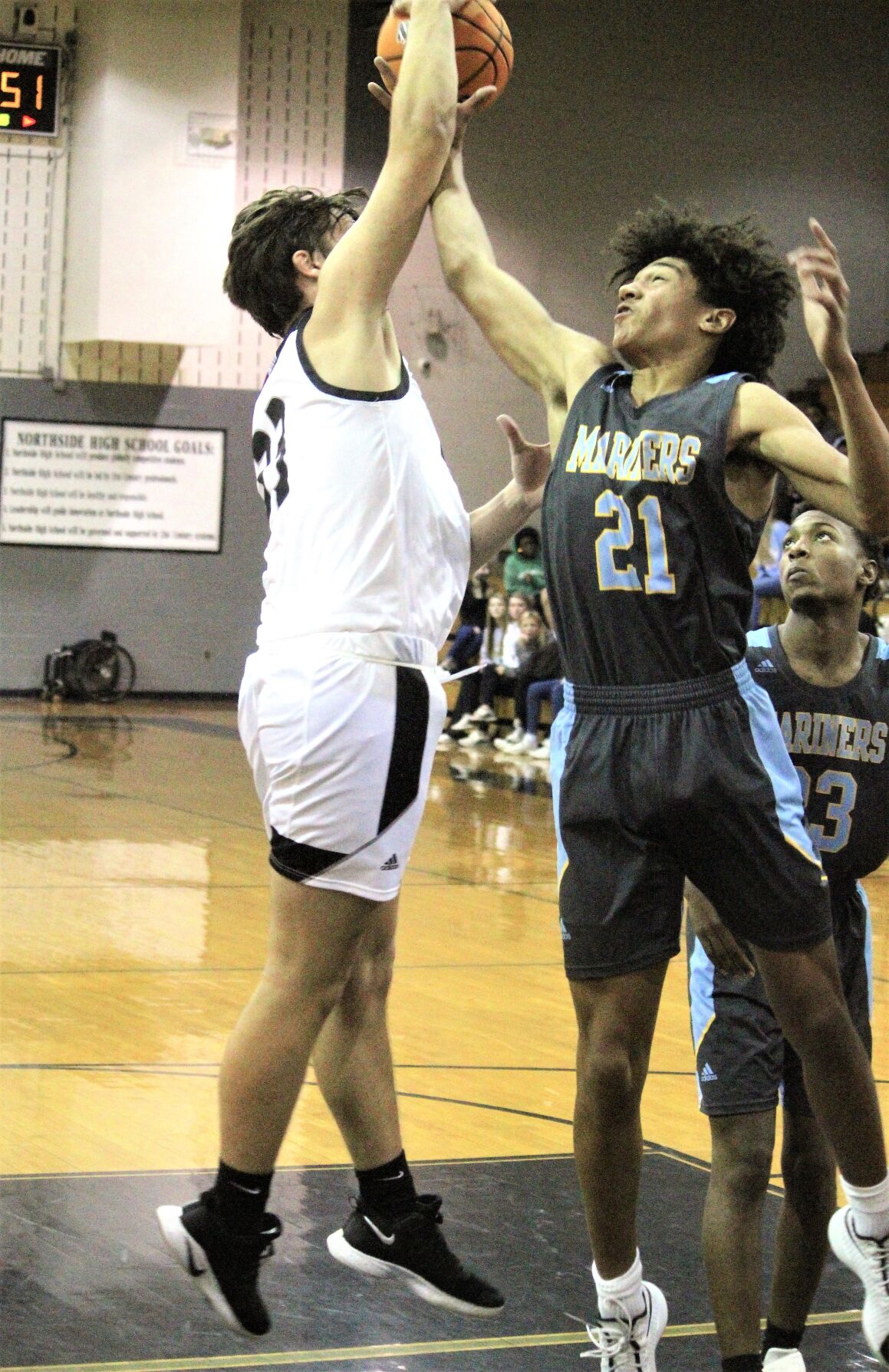 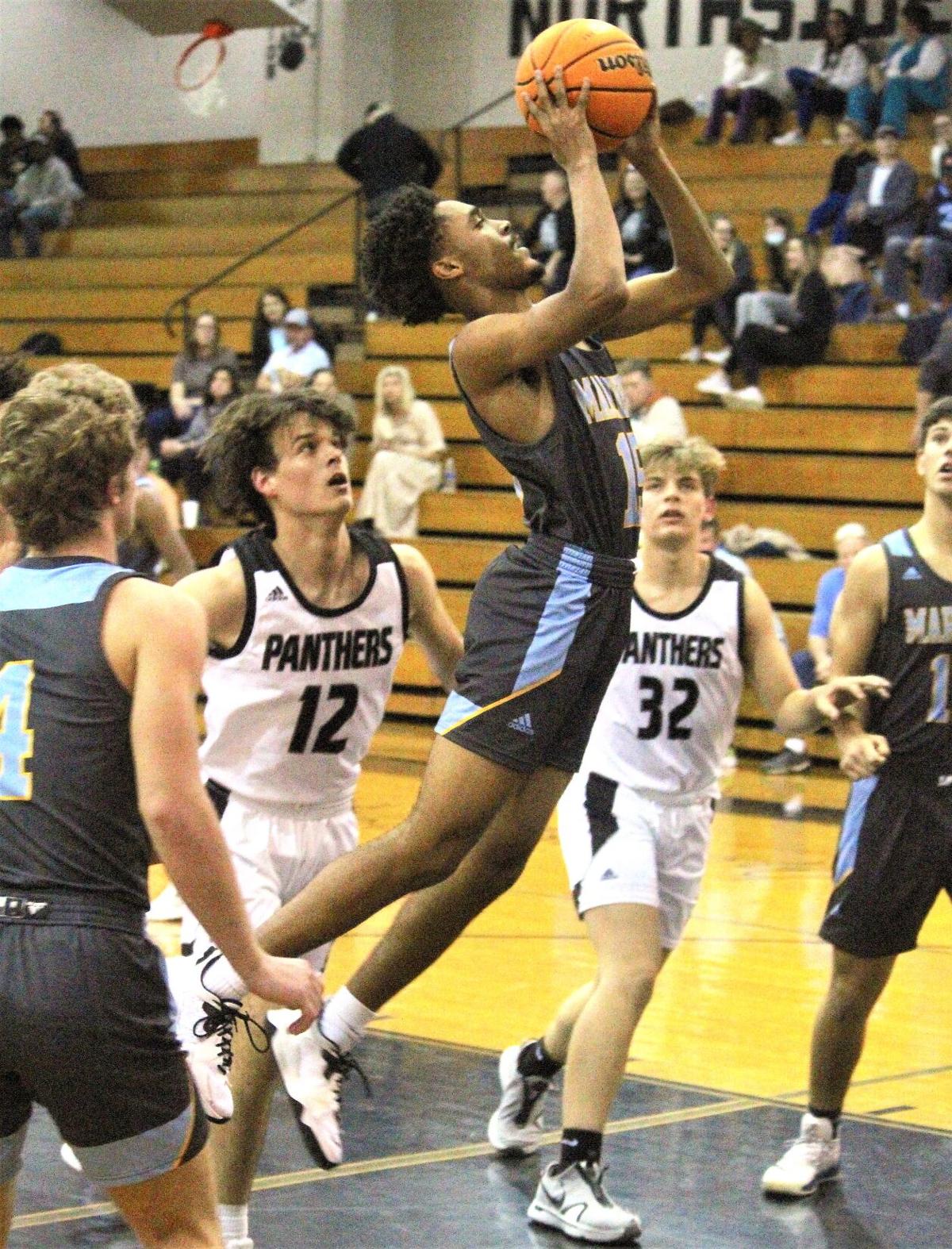 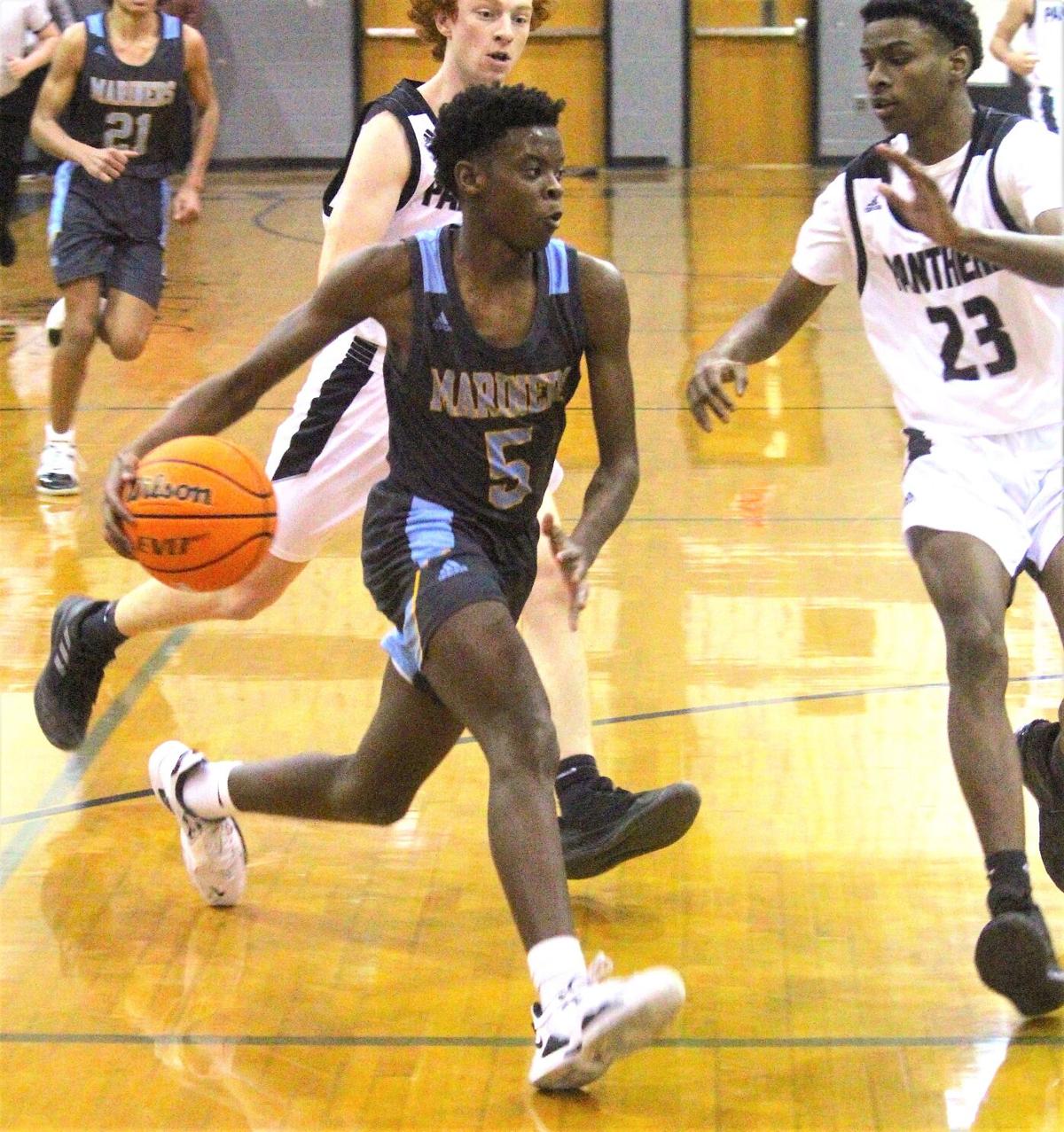 Charles Matheka has 22 points for East Carteret in the 78-59 win over Northside-Pinetown. (J.J. Smith photo)

Charles Matheka has 22 points for East Carteret in the 78-59 win over Northside-Pinetown. (J.J. Smith photo)

YEATESVILLE — The East Carteret boys basketball team played for just the second time in 20 days Tuesday, and it showed.

The Mariners slogged through the second and third quarters on their way to a 78-59 victory over Northside-Pinetown in the 1A/2A Coastal Plains Conference opener for both teams.

‘We play today, take a week off, it’s hard to prepare for this,” Griffee said. “Not knowing what your schedule is going to look like is tough.”

Even with the uneven schedule, the Mariners didn’t show much rust versus a Panthers squad that entered the game with a 6-1 mark. The visitors scored nearly 80 points on the night after cruising to an early 16-7 lead with Shamel Baker scoring six points and Charles Matheka adding five.

Northside finished the first quarter on an 8-6 run to close the score to 22-15, but East began the second frame on a 11-2 run with Baker scoring five.

Baker added 15 in the second half and finished with a game-high 25 points. Matheka matched Baker with 10 in the first half and scored 12 in the second to end up with 22.

Holding a 33-17 lead with 3:34 to go in the second quarter, the Mariners began to struggle and managed a total of 30 points in the second and third quarters.

Northside ended the second quarter on an 18-5 run and outscored East 16-14 in the third.

From the 3:34 mark of the second quarter to the 48-second mark of the third, the Panthers outscored the visitors 34-17 to take their first lead since midway through the first quarter at 51-50. Just before the end of the third quarter, East scored to finish the period and take the lead for good.

“That was a tough one,” Griffee said. “They played well. We couldn’t ever put them away until the end. It was an ugly win, but it’s a win. To be able to work through the struggles and deal with it, I’m proud of them.”

Northside’s length bothered the smaller Mariners with the home team dominating the glass and blocking shots at will.

If not for Skyler Gray, the outcome may have been different.

The East senior gave his team an inside presence, hitting double figures for the first time in his career with 14 points and more than doubling his previous career high of seven. He had scored 23 points in the first nine games of the season.

“He was good,” Griffee said. “He was big. He did so many things for us, rebounding, making baskets, he passed it well. It was definitely his best game, especially against a good team like that.”

Griffee’s squad outscored the Panthers 10-2 through the first 3:40 of the fourth to take a 62-53 lead with Gray accounting for four of those. After the teams traded four baskets to make it 66-57 with 2:19 remaining, the Mariners finished the game on a 12-2 run thanks to pressure defense leading to transition offense.

“It often comes down to the last two minutes and which team turns it over the least, which team makes their free throws, which team executes,” Northside coach Jared Adams said. “For all but the last two minutes, I was pleased with our performance. We got out of scheme, turnovers were costly, and we missed some missed layups late. And we got in foul trouble at the end.”

Keifer Boyd led the Panthers with 21 points, followed by Quay Artis with 11.