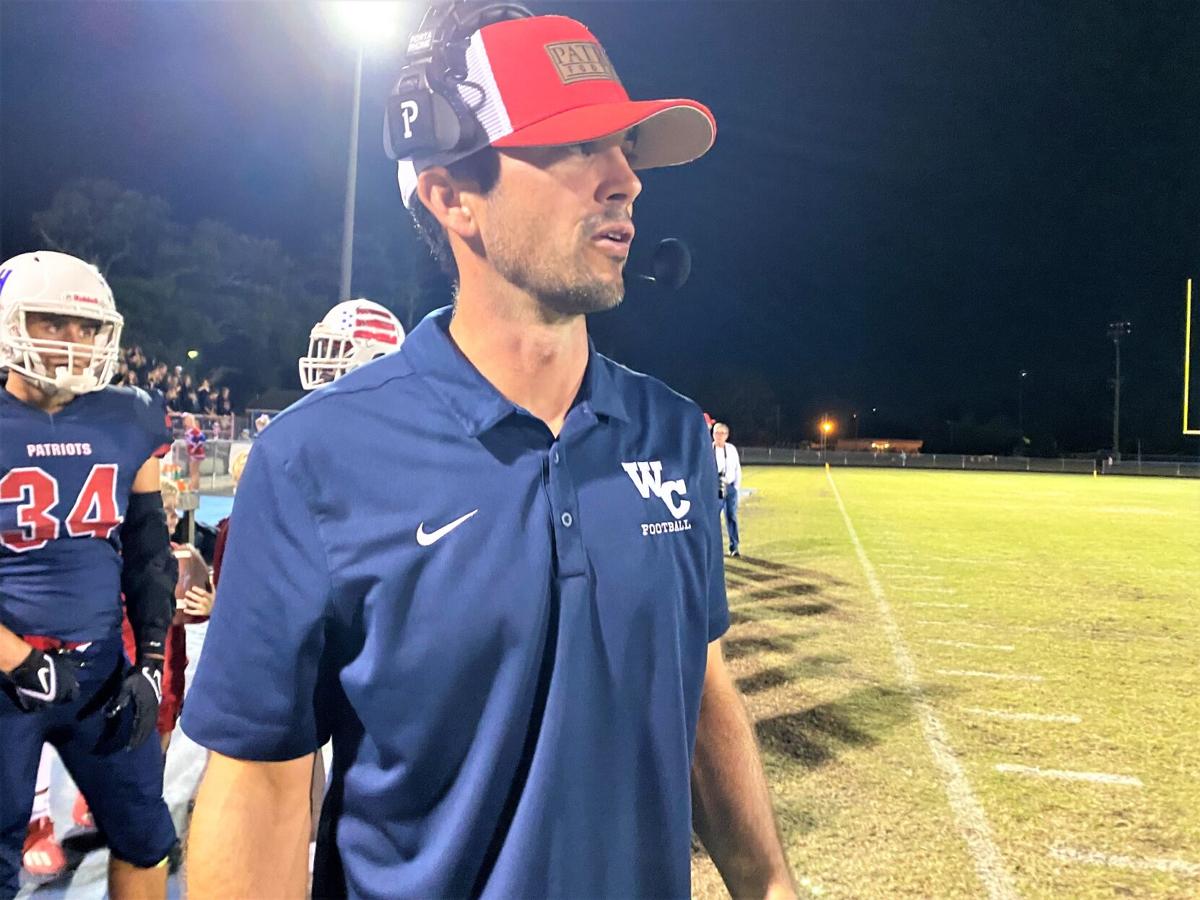 West Carteret football coach Daniel Barrow has his team in position to win an outright conference championship Friday with a win over Croatan. (Zack Nally photo) 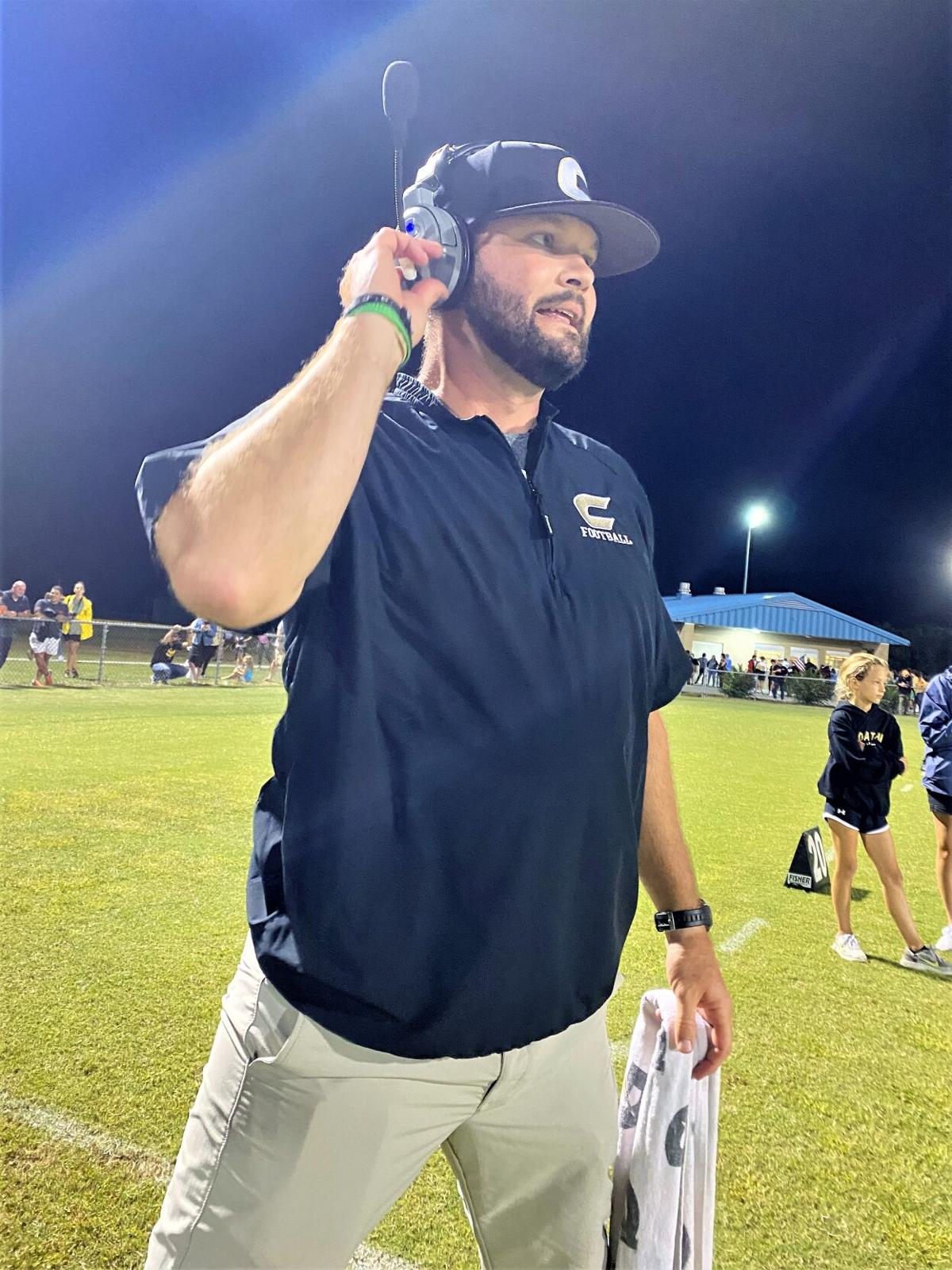 West Carteret football coach Daniel Barrow has his team in position to win an outright conference championship Friday with a win over Croatan. (Zack Nally photo)

CARTERET COUNTY — The final week of the high school football regular season has finally arrived, with one county matchup on the docket and another team on the road.

The final county matchup of the season looks to be a good one, with the Patriots vying for an outright 3A Coastal Conference championship and the Cougars looking to play spoiler.

West is coming off a convincing 48-7 victory over Swansboro that lifted it to 4-0 in the conference and helped it grab at least a share of the league title, their first since 1964. A win over Croatan, however, would give it an outright title over White Oak (3-1) and Swansboro (3-1), which will play for second place on Friday.

At 2-2, the Cougars can only hope to either tie for third place or finish fourth. Either way, it’s likely all four of the conference’s top teams will advance to the state playoffs.

The two teams last faced each other in 2019, with Croatan winning 26-20. The Cougars were later forced to forfeit the contest due to a player ineligibility infraction, but the unnamed player was not a key contributor to the game.

Being in the same conference and both facing East Carteret during the regular season, West and Croatan have faced four common opponents.

However, the split occurred against White Oak and Swansboro. West won both games with an 86-29 scoring advantage. Croatan lost both games by a combined 78-58 score.

On the field, the two programs have two distinct identities – West has a balanced offense with a dynamic passing game, while the Cougars like to run the ball … a lot.

The Patriots have gotten better over the course of the season, too. They didn’t eclipse 300 total yards in any of the first three games but have cleared the figure in all five games since. Their 2,425 total yards are split between 1,413 on the ground and 1,012 through the air.

Quarterback Jamarion Montford has been the statistical leader this season with 989 passing yards and a team-high 508 rushing yards. He has thrown for 10 touchdowns and five interceptions and run for eight more scores.

Primary running back Josh Mason is out with a broken hand, leaving West with no other runners with more than 200 yards. Shane Hester is the closest with 160 and four touchdowns.

In the passing game, West has five receivers with more than 100 yards. The top pass-catchers have been Justice Dadeel with 302 yards and two scores and Spencer Maxwell with 238 yards and four scores.

For Croatan, the passing game has been an afterthought with only 304 yards produced there. The run game is its strength, bolstered by three backs with more than 350 yards apiece. Alex Barnes leads the way with 584 yards and five touchdowns, Brayden Stephens has 465 yards and five scores, and Quincy Doneghy has 368 yards and nine scores.

The Cougars’ offense struggled through the first two weeks of the Coastal schedule, averaging 227 total yards, but they have since put up 325 a game with 370 versus Swansboro and 281 versus Dixon, the No. 1 and No. 3 most offensively productive games, respectively, this season.

The Mariners may have been eliminated from the state playoffs with the 28-0 loss to Southside (7-1 overall) on Friday, but they have a more than reasonable chance at ending the season with a win this week.

They will travel to Lejeune (0-9), which hasn’t won a game this season and been outscored by a whopping 387-6.

A win there would give the Mariners a 3-2 record in the 1A/2A Coastal Plains Conference. That only puts them half a game behind Southside (3-1), but the Seahawks don’t have another conference game on the schedule. East must finish second in the league or finish over .500 to reach the 2A playoffs this season in any sport.

When they face Lejeune, the Mariners will see a Devil Pup offense with no real identity. Quarterback Trevor Highsmith has only thrown for 97 yards and six interceptions, and top running back Malachi Moore has only rushed for 98 yards.

This Patriot team is really starting to gain some momentum. Against Swansboro, I watched a team whose play-calling and execution along with low penalties, mistakes and turnovers have clearly put them into a position to beat Croatan handily.

Daniel Barrow has built a program that I believe is going to explode with success over the next decade, because he's doing it the right way. He's built a team founded on respect and connection. The primary reason we enrolled our son in WCHS is because of this guy. Mr. Poletti opened the door for us to come in but the main reason my son is at WCHS is because of my desire to have my son play football at this program and be mentored by Coach Barrow and his staff.

West Carteret football is doing more than trying to win games; they are helping build men.