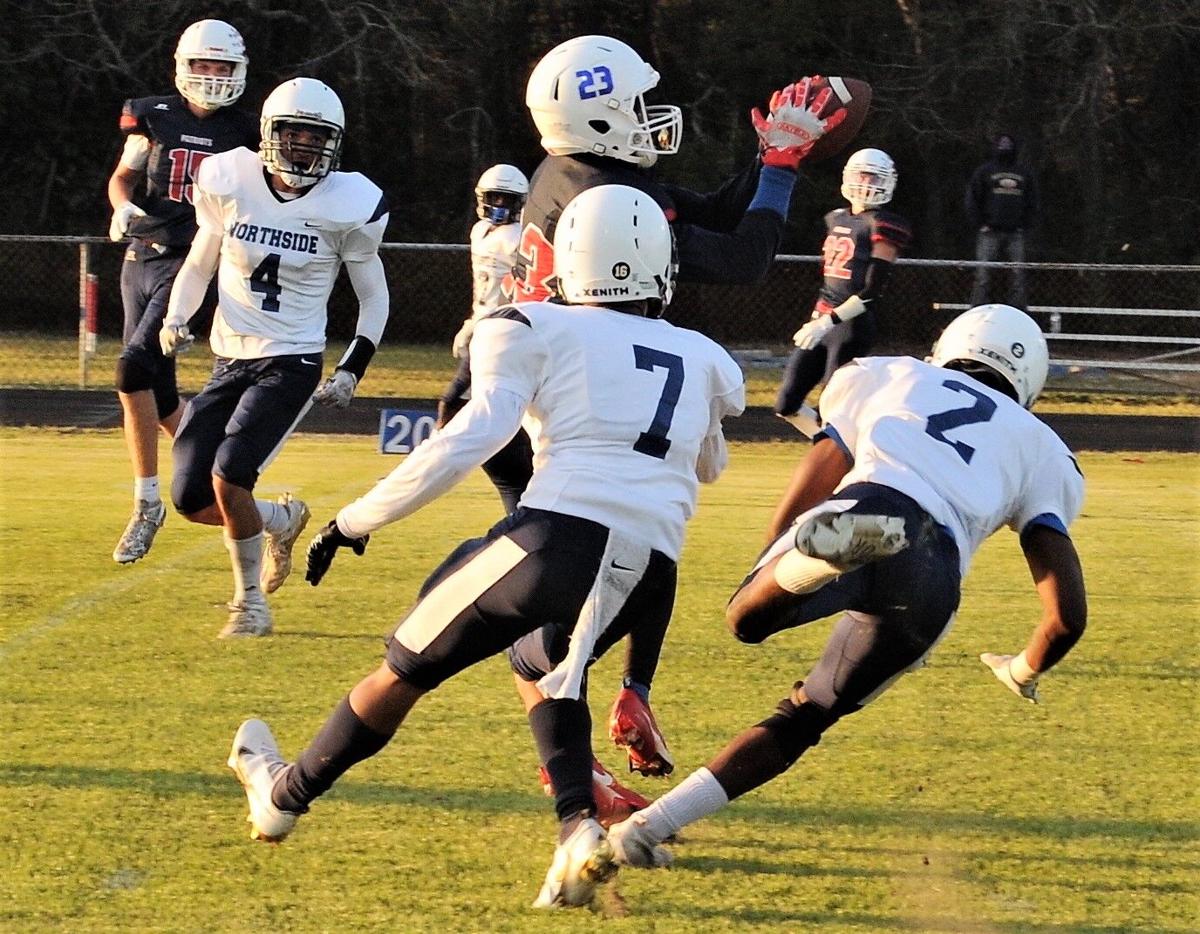 J.J. Montford pulls in a catch in double coverage on his way to a 41-yard touchdown. The West Carteret junior also had an 11-yard touchdown reception. (J.J. Smith photo) 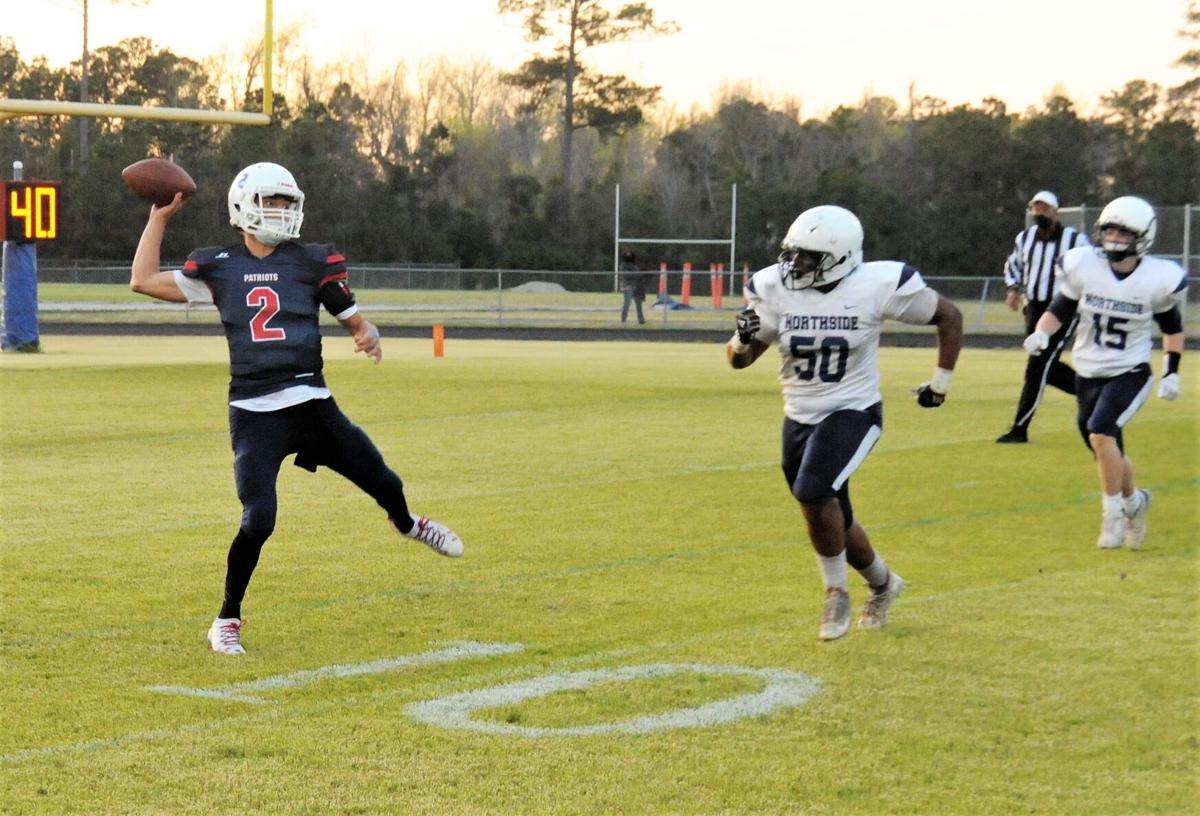 Ethan McLaughlin throws for 138 yards and two touchdowns in the 21-0 win over Northside. (J.J. Smith photo) 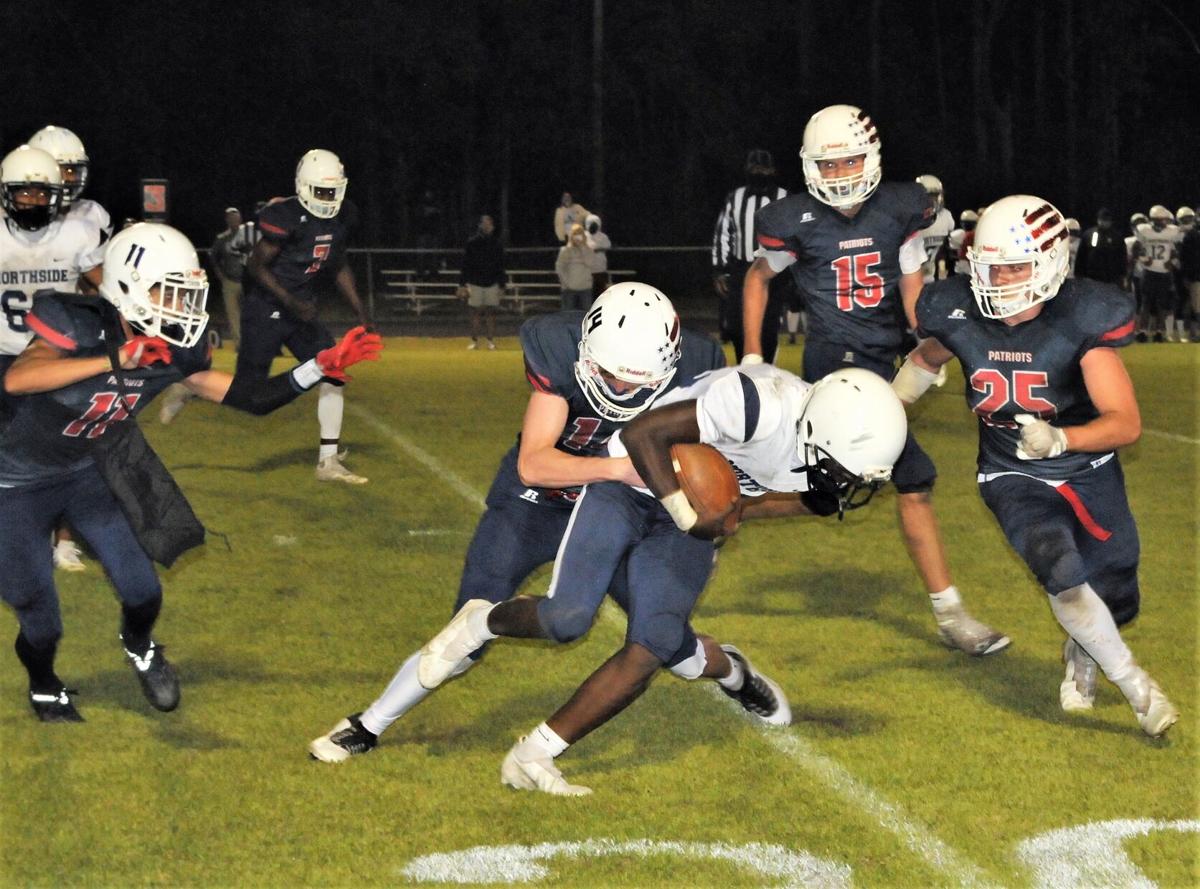 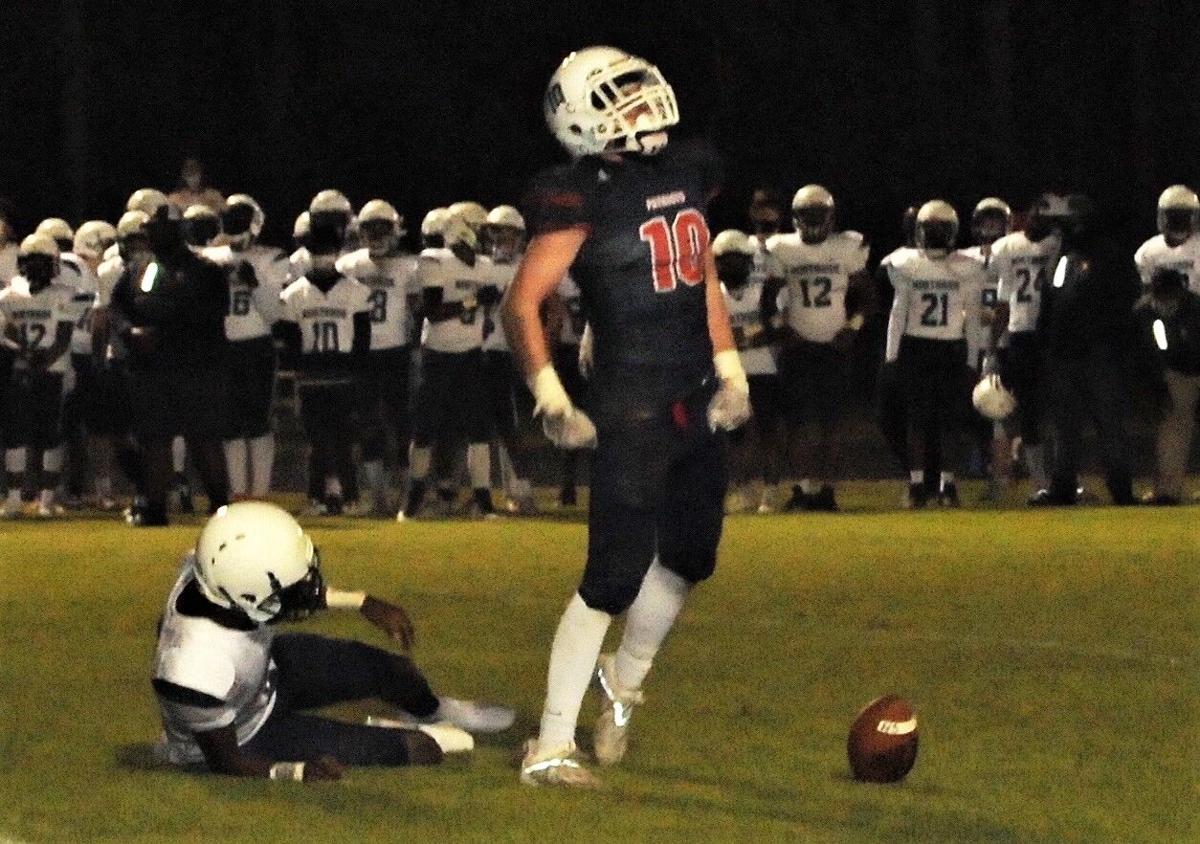 J.J. Montford pulls in a catch in double coverage on his way to a 41-yard touchdown. The West Carteret junior also had an 11-yard touchdown reception. (J.J. Smith photo)

Ethan McLaughlin throws for 138 yards and two touchdowns in the 21-0 win over Northside. (J.J. Smith photo)

MOREHEAD CITY — Northside-Jacksonville had three drives that went over 10 plays and reached inside the West Carteret 20-yard line.

Each one came up empty.

It was that kind of night for a Patriots defense that bent but didn’t break.

West registered its second straight shutout and held a team under 200 yards for the second week in a row in a 21-0 victory over the Monarchs in a rare Monday night football game.

“I loved how our defense played in that game,” coach Daniel Barrow said. “They kept getting tested and kept responding. Northside was able to drive it down, move the ball on us pretty well.”

The Patriots won their third straight game to impove to 4-2 overall and 3-1 in the 3A Coastal Conference, while Northside fell to 1-5 overall and 1-3 in league play.

Trailing 7-0 midway through the second quarter, the Monarchs drove 50 yards on 12 plays to reach the West 19-yard line, but Christian Constant was dropped for a 2-yard loss on fourth-and-5. Constant led his team with 71 yards on 13 carries.

Northside threatened to cut into a 14-0 deficit in half midway though the third quarter when it again drove 50 yards on 12 plays. On second-and-goal at the Patriots’ 5-yard line, Gabe Goodrick sacked quarterback Jordan Johnson for a 10-yard loss.

“Gabe he has come alive over the past three weeks,” Barrow said. “He’s played lights out football since Jacksonville. He and his brother, Mike, bookend our defense for us.”

Jaiden Rittenhouse then broke up a pass in the end zone on third down, and Aidan Cooper stopped Dennis Mingledoff for a short gain on fourth-and-15.

“If they score there, it’s maybe a different game,” Barrow said.

The Monarchs also failed to score on the final drive of the night – one that went for 12 plays and 44 yards – when they turned it over on downs after reaching the West 16-yard line.

C.J. Rocci made sure two more drives failed to generate points. Northside reached the West 27-yard line just before halftime when Travis Barbour stripped the ball from Johnson, and Rocci recovered the fumble. Early in the fourth quarter, Daily Kintz held up Mingledoff, Rocci ripped the ball from the Monarchs receiver and scooted 20 yards for a score to make it 21-0.

“I’m really proud of the way the defense has been playing the last two weeks,” Barrow said. “Northside was able to take the air out of the ball, drain the clock, keep it close, and I was proud how our guys were able to stand up to that.”

Barrow sang the praises of his secondary, including J.J. Montford, Javaris Miller, Rittenhouse and the Godrick brothers.

West limited Northside to 189 yards a week after shutting out White Oak 36-0 and holding the Vikings to only 155 total yards.

McLaughlin found Montford in double coverage for a 41-yard scoring pitch and catch as the first quarter came to a close. On the first drive of the second half, McLaughlin capped off a nine-play, 51-yard drive when he reversed field and delivered an 11-yard touchdown toss to Montford in the right corner of the end zone.

“J.J. played extremely well, on both offense and defense,” Barrow said. “The quarterbacks (McLaughlin, Rittenhouse) played well. I was happy with those guys.”

McLaughlin led an offense that managed just six possessions, minus two drives that included one play just before halftime, and two plays right at the end of the game. He went 11-of-21 for 138 yards.

“We probably had the fewest possessions tonight than we’ve had in any game so far,” Barrow said. “The offense for stretches was on the sideline for seven to eight minutes, and I like how we didn’t lose our rhythm. We were still able to move the ball, so I was really happy to see that.”

The Patriots ran for only 64 yards on 22 carries.

The game was pushed to Monday after a junior varsity player tested positive for the coronavirus. In a bit of fortune for West, the player was already in quarantine after a JV coach had tested positive and hadn’t been in contact with varsity players for eight days, meaning the varsity team needed to just quarantine for a few days to reach the required protocol.

The Patriots will finish the regular season Friday with a visit to Swansboro (2-3 overall, 1-3 league).