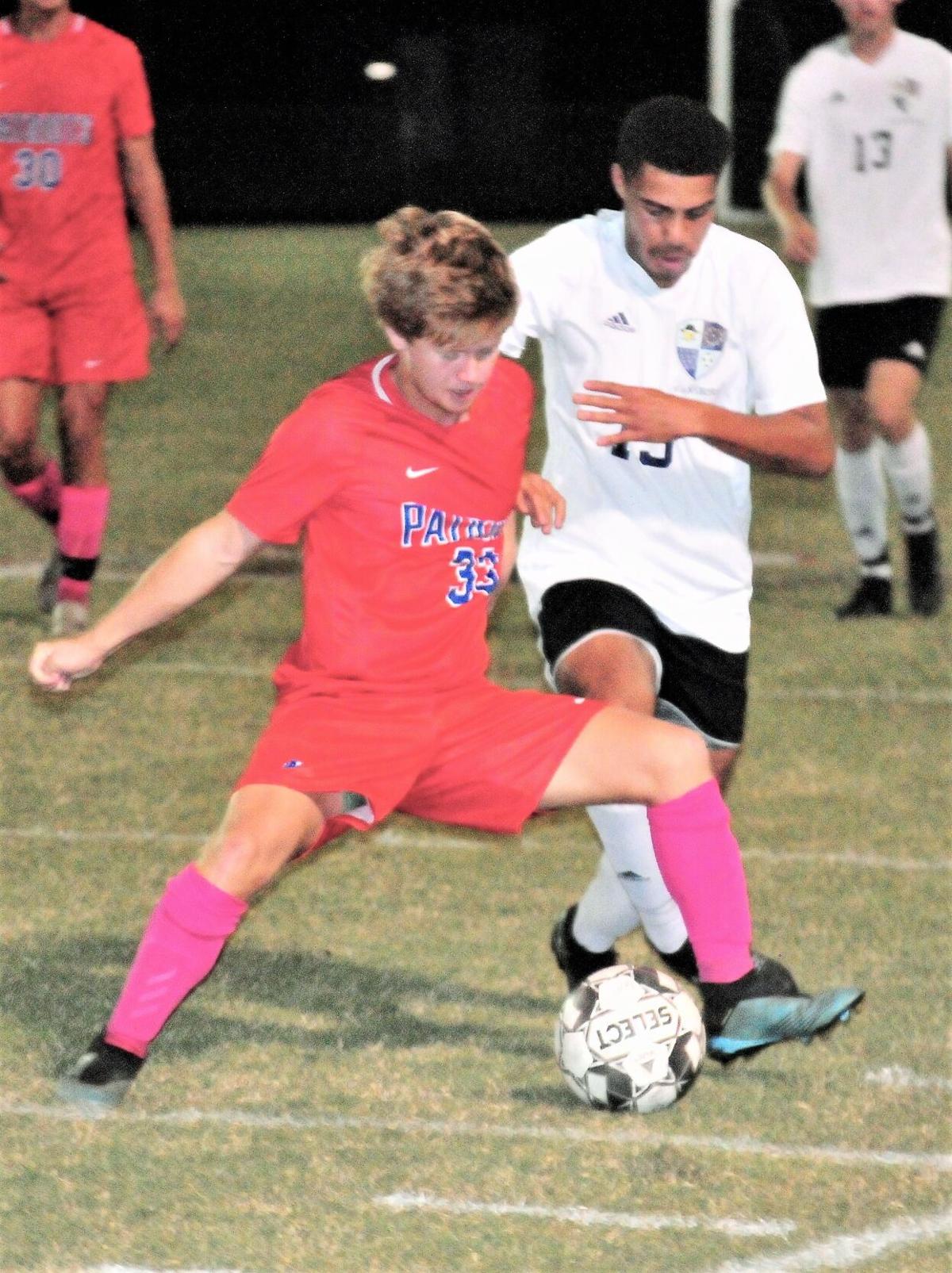 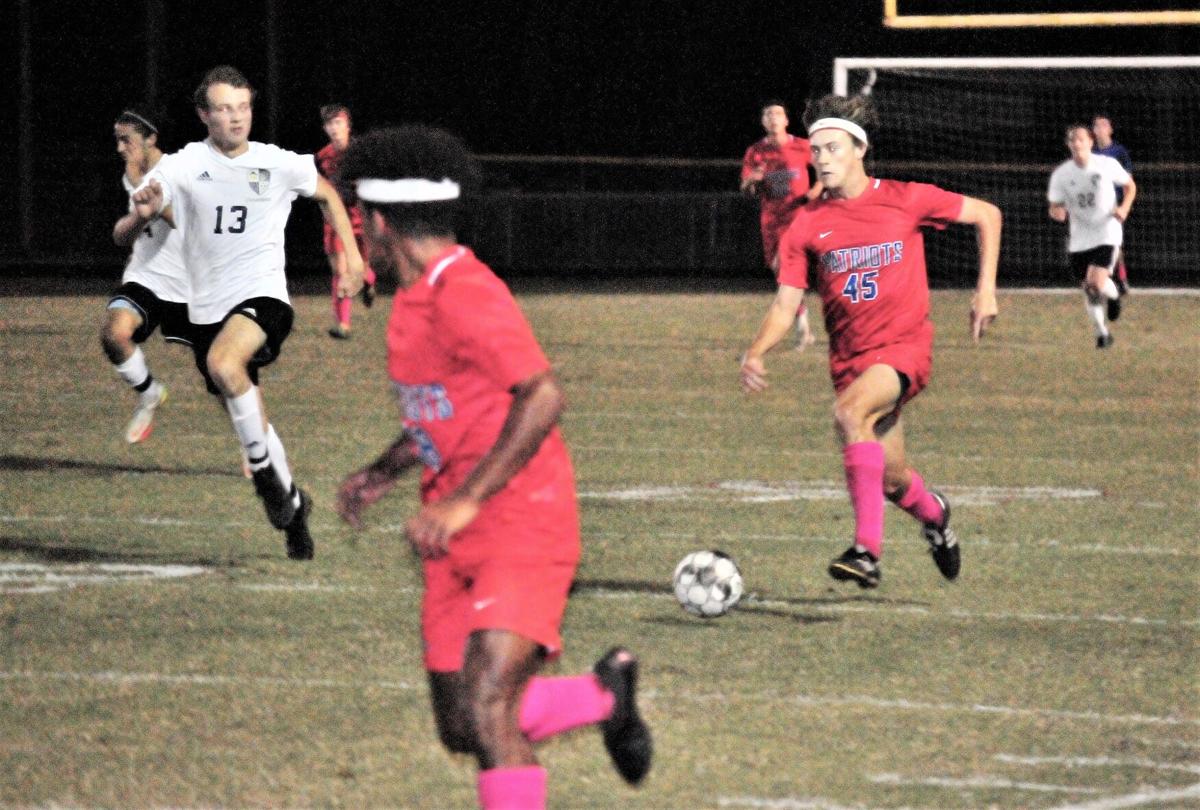 The Patriots’ Rob Cummings dishes an assist to Jake Bradley on Thursday in the loss to the Bucs. (Zack Nally photo)

The Patriots’ Rob Cummings dishes an assist to Jake Bradley on Thursday in the loss to the Bucs. (Zack Nally photo)

MOREHEAD CITY — The West Carteret boys soccer team slipped to third place in the 3A Coastal Conference on Thursday with a 3-2 loss to Swansboro.

Both teams came into the contest tied for second in the conference at 4-3, but now Swansboro is in outright second at 5-3 while West is tied with Richlands for third at 4-4 apiece. Croatan leads by three games at 8-0. Dixon (2-5-1) and White Oak (0-7-1) are firmly entrenched at the bottom of the league standings.

“We’ve shown that, when we’re at our best, we can hang with everyone,” West coach Noah Lewis said. “We’re still working on adjusting the confidence in the mindset. The program is growing, though, and I’m confident that this team will be a powerhouse in the coming years. We have conference championship aspirations.”

The Pirates came into the match without a consecutive win since September. They’d lost two of their last three, matches that head coach Doug Kidd felt were not in line with the team’s potential.

“I’m just proud of our guys because we struggled the last few games,” he said. “I was getting concerned we had lost the mojo, but we went over some things in training, and they came in and played like we thought they can. We pieced it together all over the field, on offense and defense. It was great to see us get that level of play back.”

The visitors set the tone early with a popular play for the Bucs offense this season. They send a long ball down the field, and let junior leading scorer Steven Floyd go after it. The striker got behind the defense twice for goals in the 17th and 21st minutes.

“I think Swansboro was the better team in the first half, but we came in here knowing what they wanted to do,” Lewis said. “They beat us on it twice. That kid is quick.”

Floyd had a busy game with a handful of other scoring opportunities. He had one at the 31-minute mark when he got behind the defense in the same spot, but West keeper Matthew Roberts rushed forward for the save.

Floyd looked like he might get the hat trick six minutes into the second half with a full head of steam near the West box, but defender Davis Adams made a clean slide tackle to knock the striker off the ball, long enough for Roberts to make the deflection.

After Floyd’s second goal, West got some wind back in its sails with a Logan Klott goal in the 28th minute. The pass from defender Parker Wood cut across the net and into traffic, where Klott glanced it into the net.

The momentum only lasted a few minutes, though, when an unlikely handball penalty in the West box gave the Pirates a penalty kick. Dylan Price converted it past Roberts for the 3-1 lead in the 32nd minute.

“I’m proud of the performance we put out, even in the first half,” Lewis said. “It was just one of those games. Our main problem is trying to force it down one side of the field. Our width can be our advantage, but only when we switch the field effectively. When we did that in the second half, good things happened.”

Jake Bradley scored the second goal for West, sending a long, thunderous ball from 30 yards out to the top left corner of the Swansboro net.

“The second goal was beautiful, an absolute banger,” Kidd said. “Credit to West Carteret for coming back and making it a game.”

The Patriots were reenergized and pelted the Pirate net with four shots between Bradley’s goal in the 63rd minute and the 65th minute. The last shot was the most promising, with Bradley sending a lob pass to Rob Cummings in the middle for a shot that sailed over the crossbar.

“I think we dominated the second half,” Lewis said. “We were all over them. We just needed a few more balls to go our way.”

The last week of the regular season has West hosting Dixon (10-8-1 overall) on Monday and playing at Croatan (13-2-1) on Wednesday.

Here are results of the match: