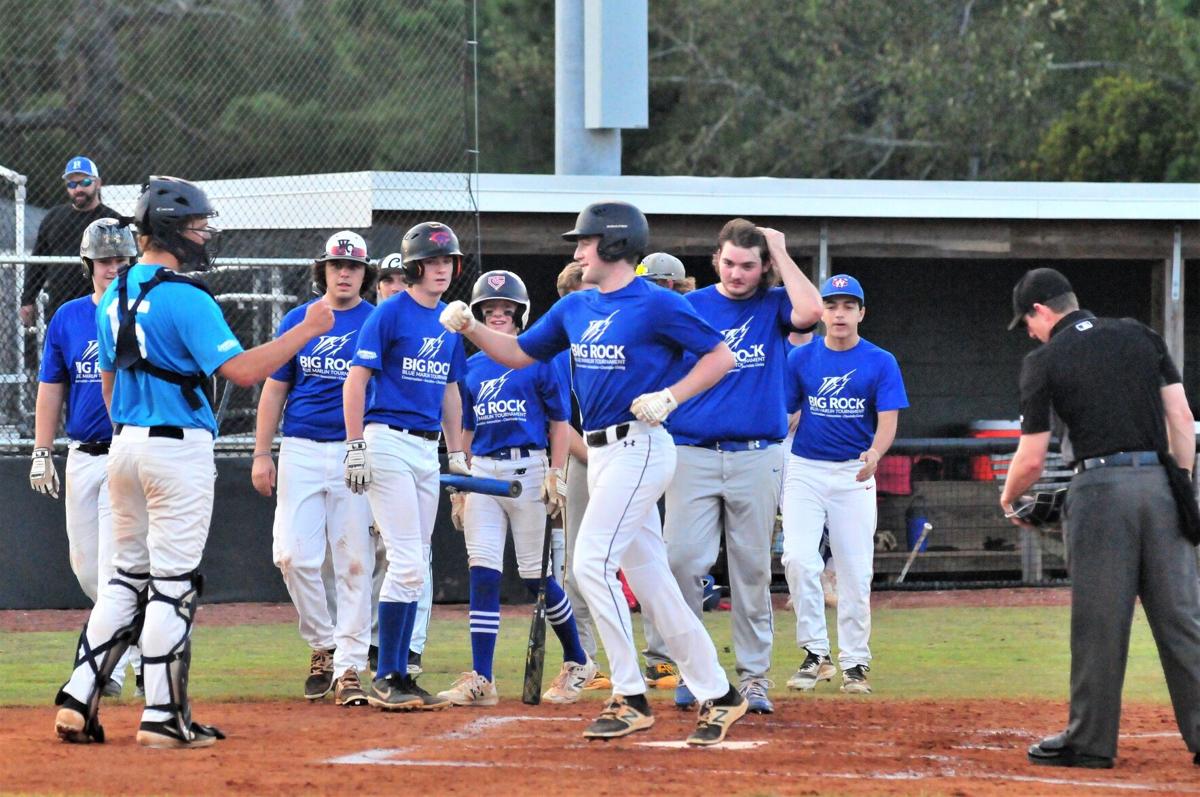 Sam Hamlin of the Royal Blue team, a senior for Croatan, gets a sportsmanlike fist bump from Marlin Blue catcher and East Carteret senior Mason Rose after belting a leadoff homer Wednesday in the 11-8 victory. (Zack Nally photo) 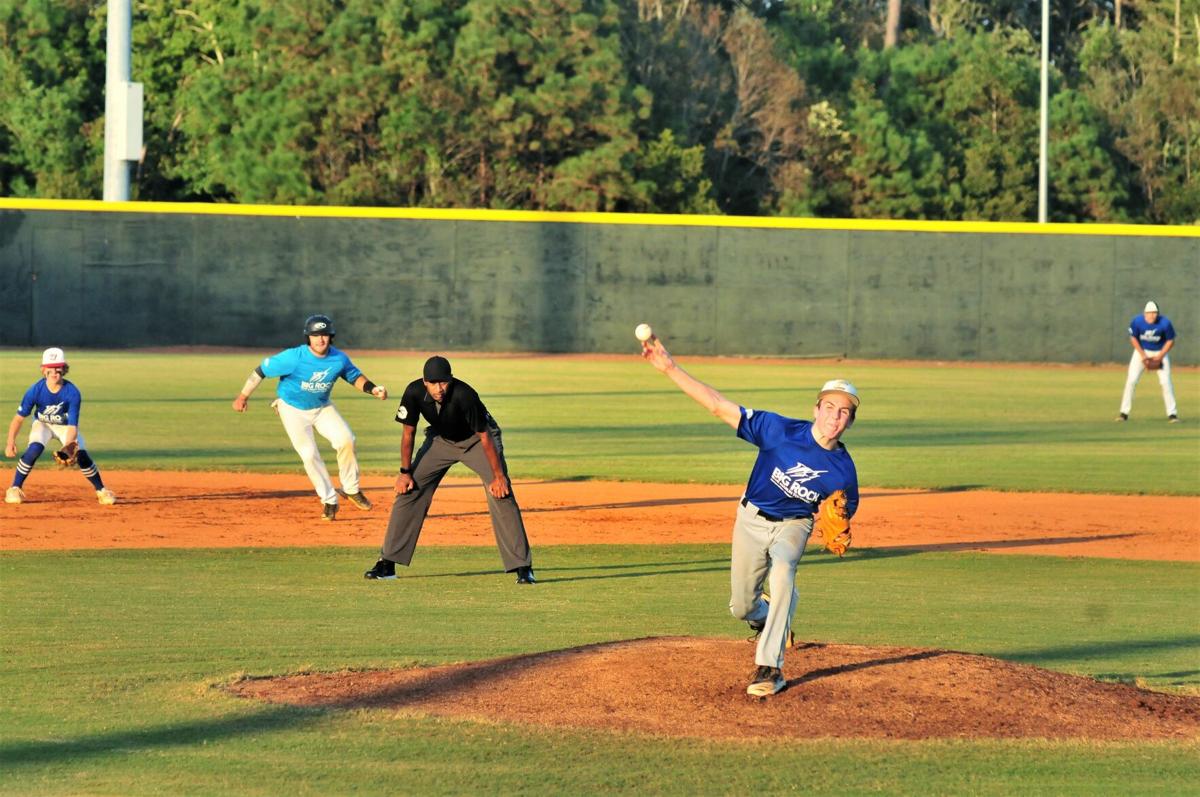 Royal Blue pitcher Holden Hamlin delivers a pitch Wednesday with Marlin Blue baserunner Connor McLeod behind him. McLeod hit a three-RBI double in the first inning to give his team a 4-0 lead in an eventual 11-8 loss. (Zack Nally photo)

Sam Hamlin of the Royal Blue team, a senior for Croatan, gets a sportsmanlike fist bump from Marlin Blue catcher and East Carteret senior Mason Rose after belting a leadoff homer Wednesday in the 11-8 victory. (Zack Nally photo)

Royal Blue pitcher Holden Hamlin delivers a pitch Wednesday with Marlin Blue baserunner Connor McLeod behind him. McLeod hit a three-RBI double in the first inning to give his team a 4-0 lead in an eventual 11-8 loss. (Zack Nally photo)

The Royal Blue team provided 10 of the contest’s 15 combined hits, helping it to overcome a 4-0 hole in the first inning and improve to 3-1. Marlin Blue dropped to 1-2 with the loss.

“We can hit, so the (deficit) wasn’t a big deal,” Royal Blue coach Robby Lasater said. “I thought we played well. There’s still some things that happen that make you scratch your head.”

The former longtime varsity coach at West Carteret referred to the wanton steals, errant throws and occasional ill-conceived pickle that accompany a fall developmental league designed to bridge the gap between a baseball-less spring and the 2021 prep season.

Sam Hamlin is one of many players in the league that hadn’t played competitive baseball since March when COVID-19 abruptly ended the season. The Croatan senior belted a dinger over the left-field wall in the second inning, added a double in the third, scored three runs and closed out the game on the mound for a standout night.

“I was rusty at first,” Hamlin said. “My first game was probably my worst game. But I came out tonight, and it’s starting to click. I feel good. It’s awesome to play right now. I just love baseball, and I wanted to play. This is great.”

Hamlin’s homer kicked off a productive second inning for the Royal Blue team facing a 4-2 deficit.

“He had a nice rip,” Lasater said. “The wind’s blowing out a little bit, but I wasn’t sure it was getting over the wall. It was a good hit.”

The frame continued with Matt Lasater hitting a two-out single to get on base, followed by an error to put Holden Hamlin on. A single from Conway loaded the bases, and Gage Bohmuller singled to score Lasater and Holden Hamlin.

Lasater was the top hitter in the game, finishing 3-for-4 with two doubles and a run. Zachery Odhum hit 2-for-4 with a double.

Thomas Wallace was the Marlin Blue team’s best hitter on the night, going 2-for-3 with a pair of doubles and as many runs. He was part of the four-run effort in the first inning, the third straight batter to be walked after Landon Millis and Tyler DeLuzio. Millis scored on a passed ball, while DeLuzio, Wallace and Dalton Newman, who was hit by a pitch to reach, scored on a stand-up double from Connor McLeod.

“The guys swung the bat well,” Marlin Blue coach Buddy Bengel said. “It was the first night we’d put up a good amount of runs. Tonight, we scored more than we did the first two games combined. Thomas stepped up big tonight. He’s hitting well, and Connor had the big hit that got us going.”

McLeod also had a nice catch for a pivotal out in the fifth inning. The Marlin Blue team’s solid defense over the last two innings gave it a chance to tie the game.

“It was an alright night,” McLeod said. “You never like to lose. And then my best friend (Sam Hamlin) was playing on the other team, so that added some sting. But I’m glad to be playing baseball. This is competitive as you make it, and I think everyone is enjoying it.”

Holden Hamlin was the winning pitcher for the game, surviving a rocky start to keep the Marlin Blue team off-kilter enough to give his team’s offense a chance.

“Once he got through the first inning, he was OK,” coach Lasater said. “He just hadn’t been out there in a while, but that’s why I made him go back out there.”

Carter Mulligan and Ryland Howell both spent time on the mound for Marlin Blue.

“When we throw strikes around the plate, good things happen,” Bengel said. “We’re going to keep working on that and see what happens next week.”

On Monday, Marlin Blue team will take on Red at 8 p.m.

Royal Blue will face Black in a battle of the league’s top two teams. Black is 3-0 and Royal Blue 3-1.

All games will take place at Big Rock Stadium.