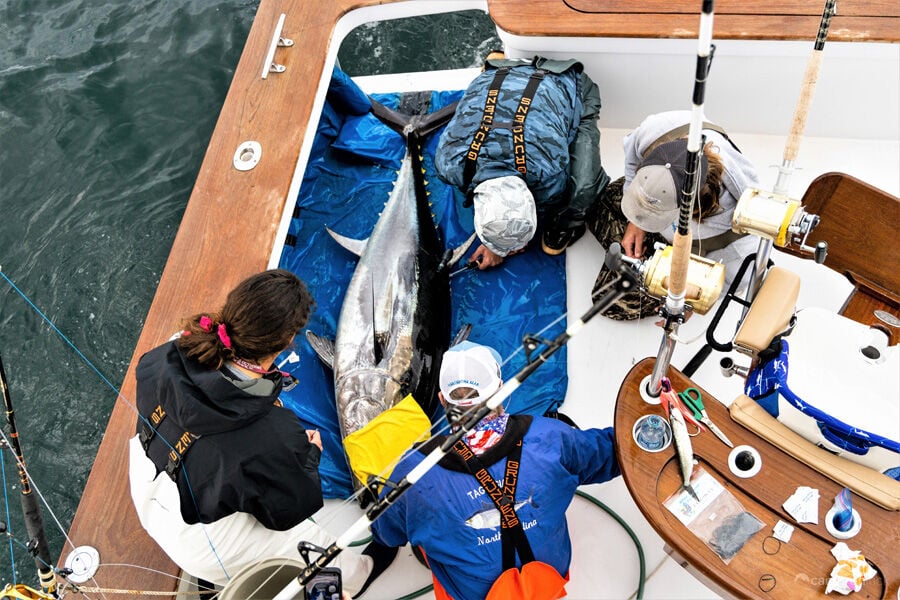 he Tag-A-Giant Foundation research team aboard The General tags and releases a bluefin tuna, one of approximately 990 to be tagged in the state’s waters. (Contributed photo) 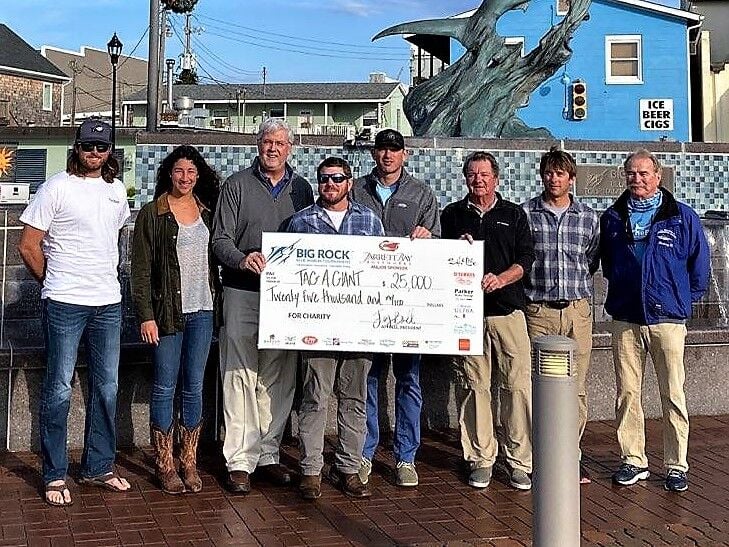 he Tag-A-Giant Foundation research team aboard The General tags and releases a bluefin tuna, one of approximately 990 to be tagged in the state’s waters. (Contributed photo)

MOREHEAD CITY — There are giants roaming the waters of the Crystal Coast, prompting the return of the Tag-A-Giant Foundation research program.

TAG is in its 25th year of tagging Atlantic bluefin tuna and back in Morehead City after a 10-year hiatus.

The program deploys electronic tags on the two species of northern bluefin tunas in more than 15 countries. The Atlantic bluefin tuna has been tagged in the United States, Canada, Ireland, United Kingdom, Israel, Spain, Italy, Morocco, France, Croatia and Portugal.

“Our objective is to build capacity for this type of research throughout the Atlantic,” TAG scientist Robbie Schallert said, “and on the sister species of the Atlantic bluefin in the Pacific Ocean, too.”

Additionally, the program’s goal is to inspire conservation of bluefin tuna, support scientific research that will inform fisheries management organizations and to preserve and enhance the opportunities of anglers to catch bluefin tuna for sport or their livelihood.

To date, TAG has electronically tagged over 990 bluefin tuna off the state’s waters and 1,500 more in other locales. This year, it got funding support from the Big Rock Foundation.

“Our electronic tags ‘peel back’ the ocean and allow scientists to get a better understanding of how bluefins migrate across ocean basins,” TAG founder Dr. Barbara Block said. “We have been at the forefront at developing these tags, which enable electronic tracking of fish that are fully submerged.”

The spatial tagging data is integrated with molecular and geochemistry analytics to piece together the origins of bluefin tuna, giving fisheries managers better metrics to set quotas.

Through the years, the data the team generated helped National Oceanic and Atmospheric Administration (NOAA) and International Commission for the Conservation of Atlantic Tunas (ICCAT) build models that have been used to manage the bluefin.

Now a resurgence of the fish has been occurring, and the winter fish seems to have returned in ‘taggable’ quantities.

“We are here this season,” Schallert said, “with new technologies and new questions about the distinct populations of bluefin tunas, their mixing rates in the North Atlantic, their spawning grounds and their age to maturity.”

The spatial, temporal data on tuna movements helps build more robust mathematical models on how bluefin tuna use the North Atlantic Ocean and adjacent seas in the Gulf of Mexico and Mediterranean. The program seeks to understand the biomass of each bluefin tuna population and to help maximize their abundance and biodiversity.

TAG started its relationship with Morehead City before the program had come to fruition, when Block, a professor at Stanford University, was still doing graduate work at the Duke University Marine Lab in 1981.

Block worked with the Big Rock Blue Marlin Tournament to study the biology of the blue marlin for her Ph.D. In 1996, she started tagging Atlantic bluefin tuna with TAG through Stanford. The program first worked out of Hatteras with Bob Eakes before relocating the jumping-off point to Morehead City. The waters off the state’s coast offer rife opportunities for tagging.

“Not only do the fish utilize this productive coastline for feeding,” said Block, “but some of the best fishermen in the world call North Carolina home, and they have been partners with our tagging program for more than two decades.”

Morehead City is a fish haven because of the confluence of currents that provide tremendous mixing of the water masses of the warm Gulf Stream and cooler coastal waters. This creates enormous rich waters for menhaden, one of the bluefin’s favorite food.

Seeking partnerships to help the program get off the ground in 1996, TAG utilized “tag” boats, originally the Calcutta captained by John Jenkins and Sensation captained by Dale Britt.

Every winter for almost a decade, the boats worked together to have a tagging “roundup” for two to three weeks. They worked with local recreational fishing boats, acting as traffic controllers, penciling in positions of hooked-up boats and timing the fight so the transfer would ensure healthy releases.

This year was a sentimental one for TAG as it mourned Jenkins’ death earlier this year.

“This year has been a year of reflection as Capt. John Jenkins passed away,” Block said. “John was more than just a TAG captain to all of us. He embodied everything good about people and relationships and was a darn good fisherman. If it weren't for the respect John and Dale garnered, we would have had a difficult time tagging almost 1,000 fish here in North Carolina.”

John's two sons, Owen and Tucker, were able to honor their father with the catch and release of a bluefin tuna with electronic tags earlier this month. They were also able to scatter their father’s ashes as the fish began its scientific journey.

“There was not a dry eye on the boat,” Block said. “I can say as a field scientist for almost 20 years, it was one of the most special moments in my career. (It was) a true testament to the man John was and the men that John's sons have become.”

This year, TAG utilized The General, captained by Wade Fickling. The General was a solid choice considering its spectacular performance during the summer’s N.C. Governors Cup, which prioritizes catch and release.

“Wade is very familiar with our program since he would mate for us back in the earlier days,” Block said. “In fact, most of the mates we have had in (North) Carolina are now running boats, so I have no doubt TAG is in good hands.”

When the time comes to actually tag the tunas, anglers and scientists make all attempts to bring the fish aboard the boats in order to get the most accurate measurements, sample the fish for genetics and place the electronic tag properly.

“We actually bring all fish onboard the boat if possible to ensure a healthy tagging process,” Block said. “We cover the eyes in order to calm the fish, we irrigate its gills with a salt water hose and the fish lies on a padded slick mat to protect its skin/mucous.”

Gill-breathing fish rarely come to the surface like marine mammals or whales to breathe. This makes the use of GPS or radio technologies to track the animals in real time difficult.

“Instead, our tags record environmental information such as light (photons), ambient temperature of the water the tuna is swimming in, body temperature if the tags are surgically implanted inside the fish, pressure to know how deep the fish is diving and time.

With an accurate clock and light sensors, TAG is able to measure sunrise and sunset and utilize astronomical equations to assert the location of the fish under the sea. Additionally, it can help discern the oceanography of the region the fish is swimming through and other factors, like the body temperature spikes when a tuna has had a meal.

“Tunas are rare in that they are warm-blooded fish, and like us, when they eat a meal, they get the heat of metabolism of the meal,” Schallert said. “So, we’re getting everything from position to caloric intake and ocean conditions. Taken together, this tells us where tunas forage, where they spawn, when they migrate and to what locations.”

Scientists are able to take genetic samples, fin clips, to discern from what population the bluefin originates. In this state, many of the fish are from the Mediterranean Sea, as well as the Gulf of Mexico. More recent populations have emerged that represent the fish that are collected off the Crystal Coast.

“Our focus is to understand when each population comes through, to better understand their residency here and their abundance,” Schallert said. “Ultimately, to best manage the fishery, we need to know how many fish from North Carolina catches come from each of the populations of bluefin tuna.”

The scientists at TAG are confident about the resurgence of the bluefin tunas, a result of stringent quotas that helped control and promote the populations.

“We are excited about the rebound of bluefin tuna occurring throughout the North Atlantic,” Schallert said. “This rebound is born out of painstaking quotas that have helped to balance the fishery with the biology of the complex populations. Bluefin tuna are occupying ranges we have not seen during our lifetime.”

The next step for TAG is utilizing genome sequencing to better understand bluefin tuna origins.

“We have just finished sequencing the full genome of the Atlantic bluefin tuna in collaboration with Stanford University researchers,” Schallert said, “We think by next season, with funding, we can build dockside tests for genomics that will better indicate from what population the bluefin tuna landings come from. To build a healthy fishery, we need to measure the biodiversity of the species. These new genomic tools will enable this.”

TAG exists through donors who help sponsor tags. If you are interested in tagging bluefin or sponsoring a tag, visit tagagiant.org to learn more.