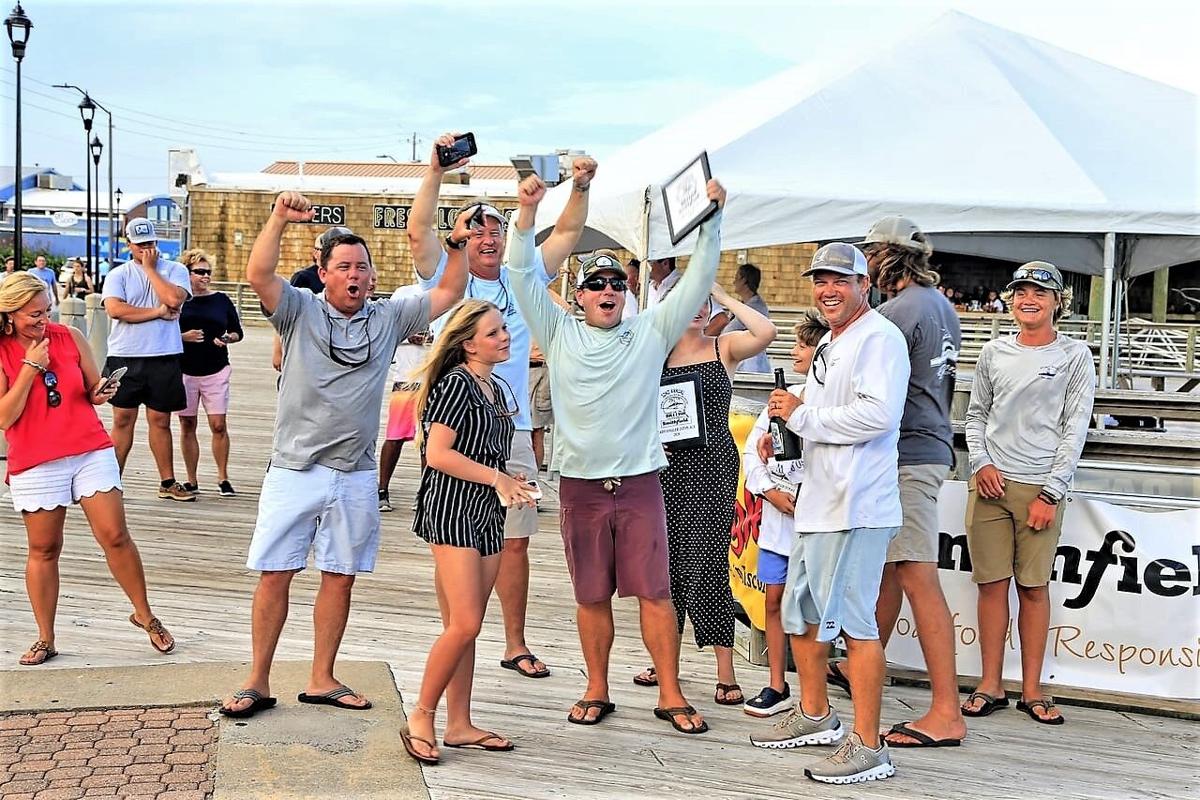 The crew of The General, captained by Wade Fickling, center, celebrate Saturday after winning a third straight Band the Billfish Tournament. (Contributed photo) 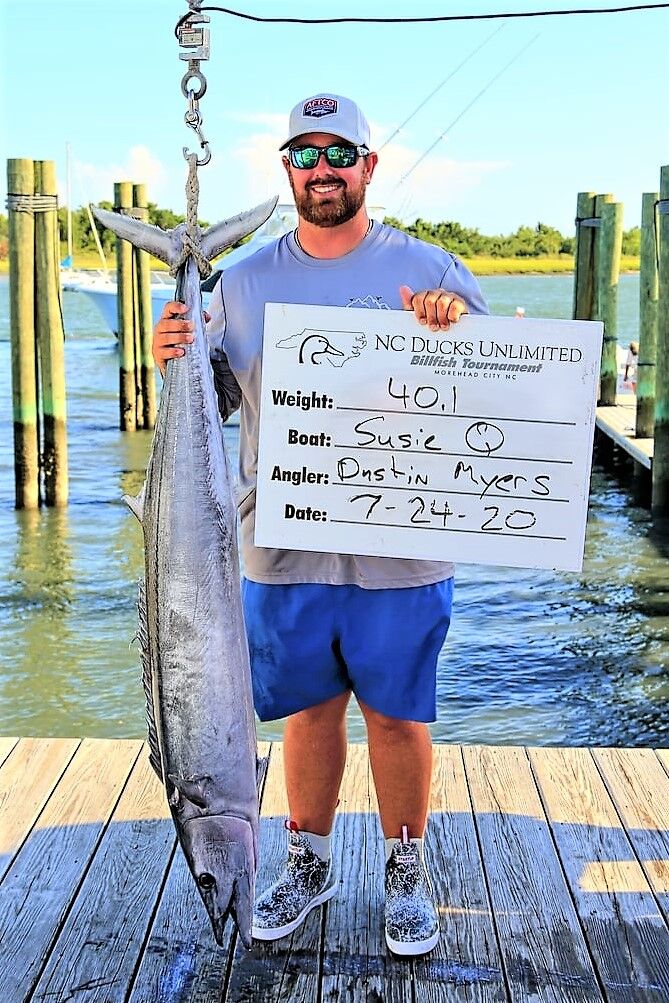 Dustin Myers of Susie Q holds up his 40.1-pound wahoo, the biggest fish brought to the scale all weekend. (Contributed photo) 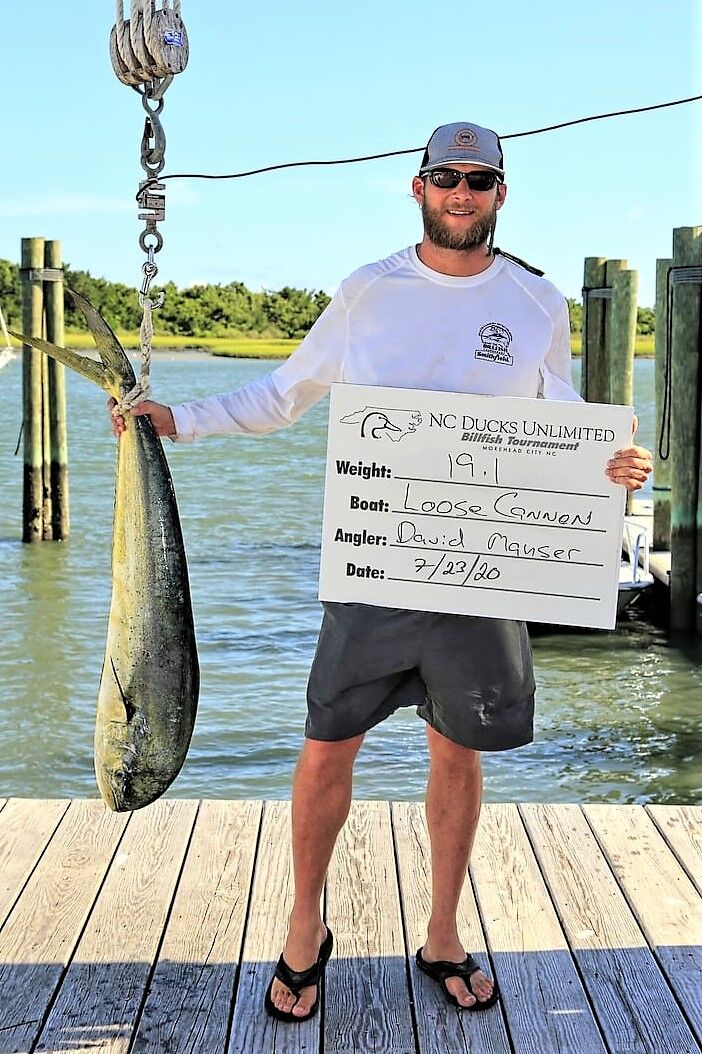 David Mauser of Loose Cannon holds up his 19.1-pound dolphin worth $24,500. (Contributed photo)

The crew of The General, captained by Wade Fickling, center, celebrate Saturday after winning a third straight Band the Billfish Tournament. (Contributed photo)

Dustin Myers of Susie Q holds up his 40.1-pound wahoo, the biggest fish brought to the scale all weekend. (Contributed photo)

David Mauser of Loose Cannon holds up his 19.1-pound dolphin worth $24,500. (Contributed photo)

The Wade Fickling-captained boat won in 2018 and 2019 but faced a strong field of 41 boats this summer for the second-to-last competition in the N.C. Governor’s Cup. The 55-foot Buddy Cannady released two blue marlin on Saturday, plus another blue and a sailfish on Friday to finish with 1,350 release points.

The General, a public charter boat which recently also won the Boys & Girls Clubs of Coastal Carolina Billfish Classic, walked away with a tidy prize sum of $36,750 for wins in the Level I and Level II categories.

“(Capt. Fickling) has done something no one’s ever done in my memory,” Tournament Director Mark Shouse said. “We’ve had people win tournaments more than once but not three times in a row. Not for ours, and I know not in any other tournament in the Governor’s Cup. They’re a good boat, and they have a good team. That makes all the difference.”

The tournament itself saw a surge in participation with 41 boats, producing a purse worth $131,000 in prizes. The two-of-three days format accommodated the best weather the weekend had to offer, which really didn’t change much from day to day.

“The tournament was a success,” Shouse said. “The participants seemed pleased with it. The weather was great, first time we can say that in years. We raised way more money than we have in recent years thanks to an increase in boats and sponsors. The virtual setup worked well. Everyone I think is used to that concept now. Not that we liked it, but it worked.”

The captains meeting took place through a Zoom meeting, and the awards ceremony was broadcast virtually from the tournament’s waterfront site of Big Rock Landing.

The catch-and-release billfish competition saw 39 total releases, the most since 2014. That figure includes 17 blue marlin, the second-highest release total since the tournament’s inception and the most since 1998.

“The blue marlin are out there, there’s no doubt,” Shouse said. “Anglers said they were everywhere out there, even if they weren’t able to hook the fish. The fishing overall was OK. There were no tuna caught and the dolphin were on the small side, but all in all, were really happy with how everything happened.”

No boat but The General eclipsed the 1,000-point mark. Patron placed second with 800 points and walked away with $8,100 in Level I prize money. Due South placed third with 700 points and won $19,350 in Level I and Level II prizes.

Demolished Profits won the outboard division with the release of one sailfish for a $2,000 payout.

The biggest fish brought to the scale all weekend was a 40.1-pound wahoo reeled in by Dustin Myers off Susie Q, worth $5,500 in prizes. Yellowfin weighed a 30.3-pound wahoo for second place and a $3,500 payout.