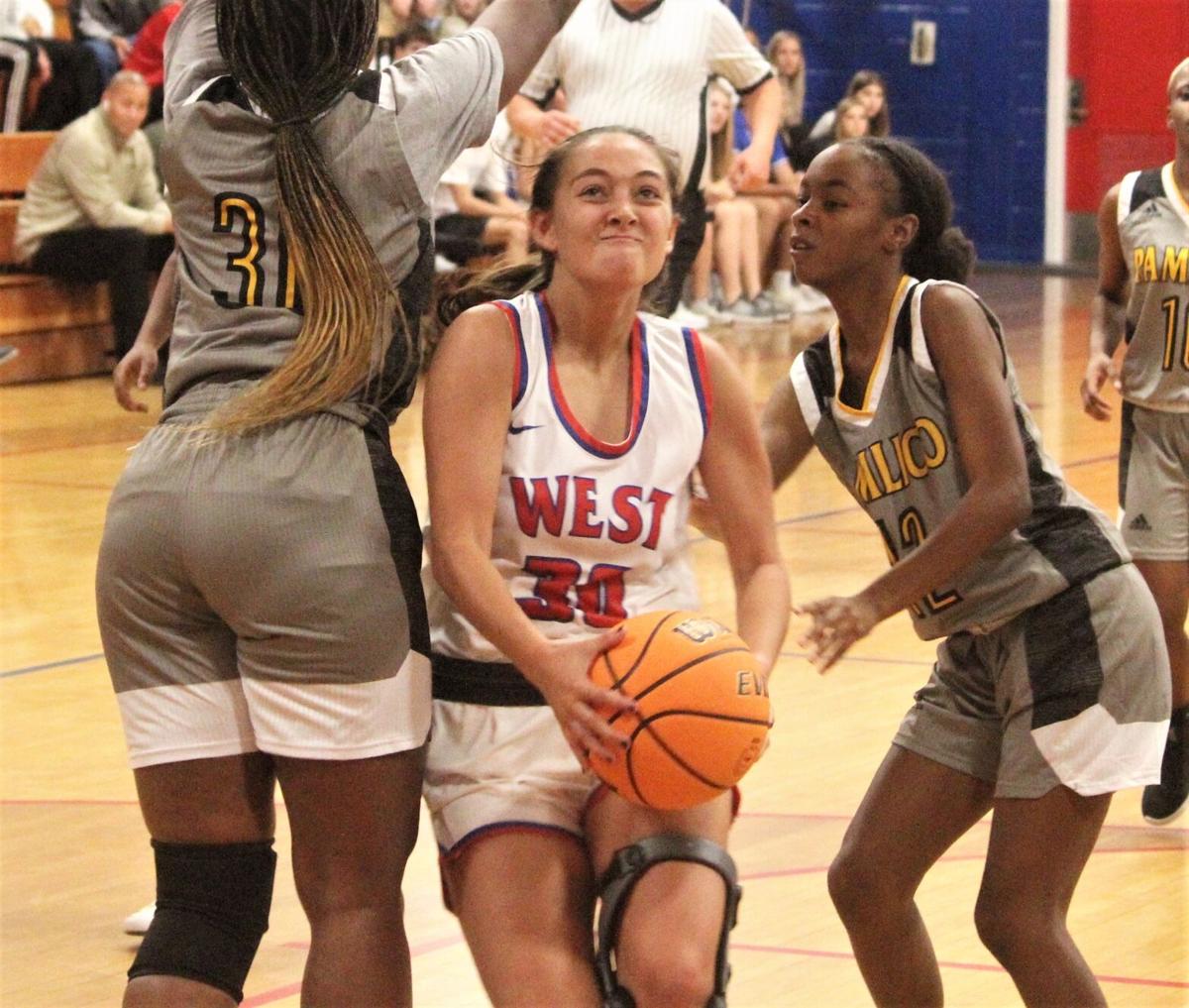 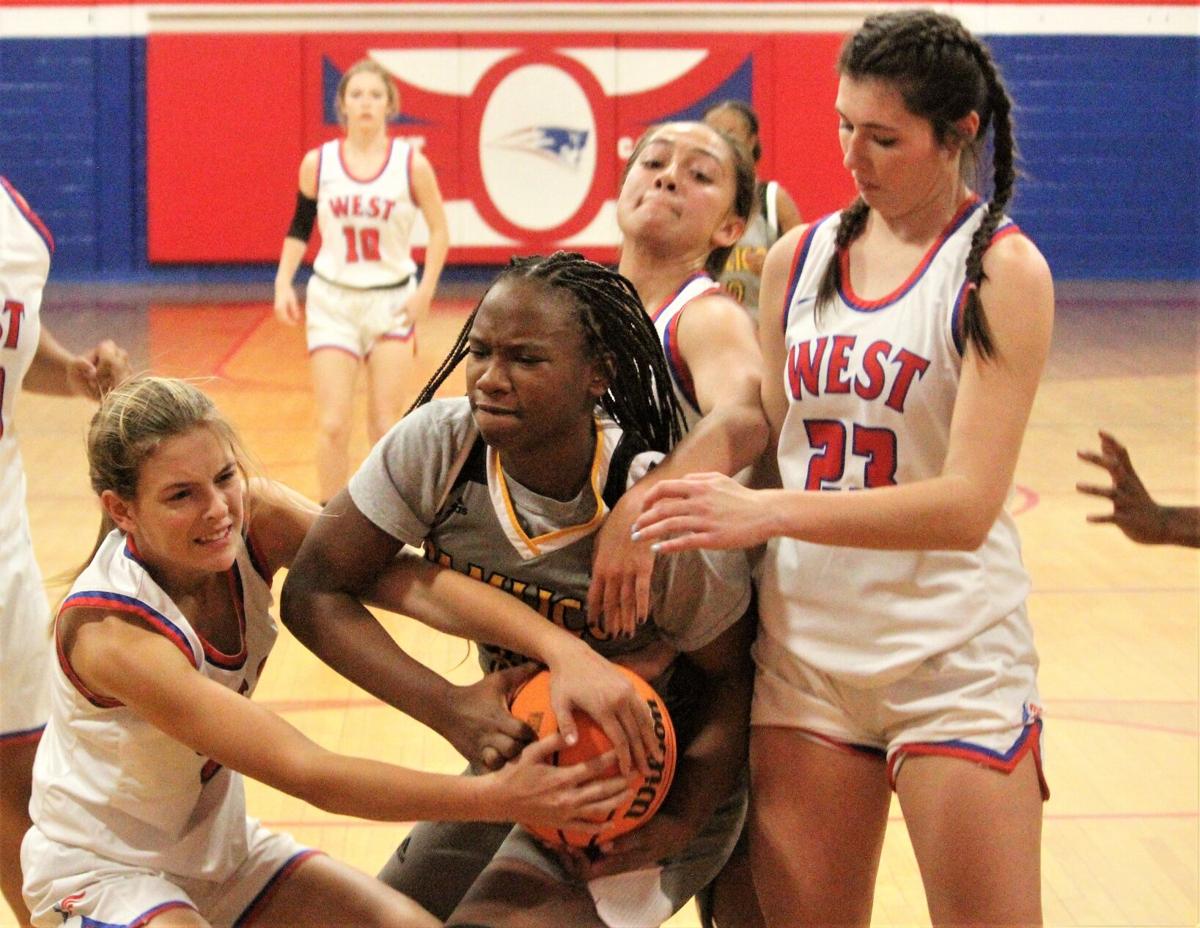 West Carteret’s Lily Green reaches for the ball in the 40-25 victory over Pamlico. The Patriots’ defense shut down the Hurricanes, giving up just 15 points over the last three quarters. (J.J. Smith photo) 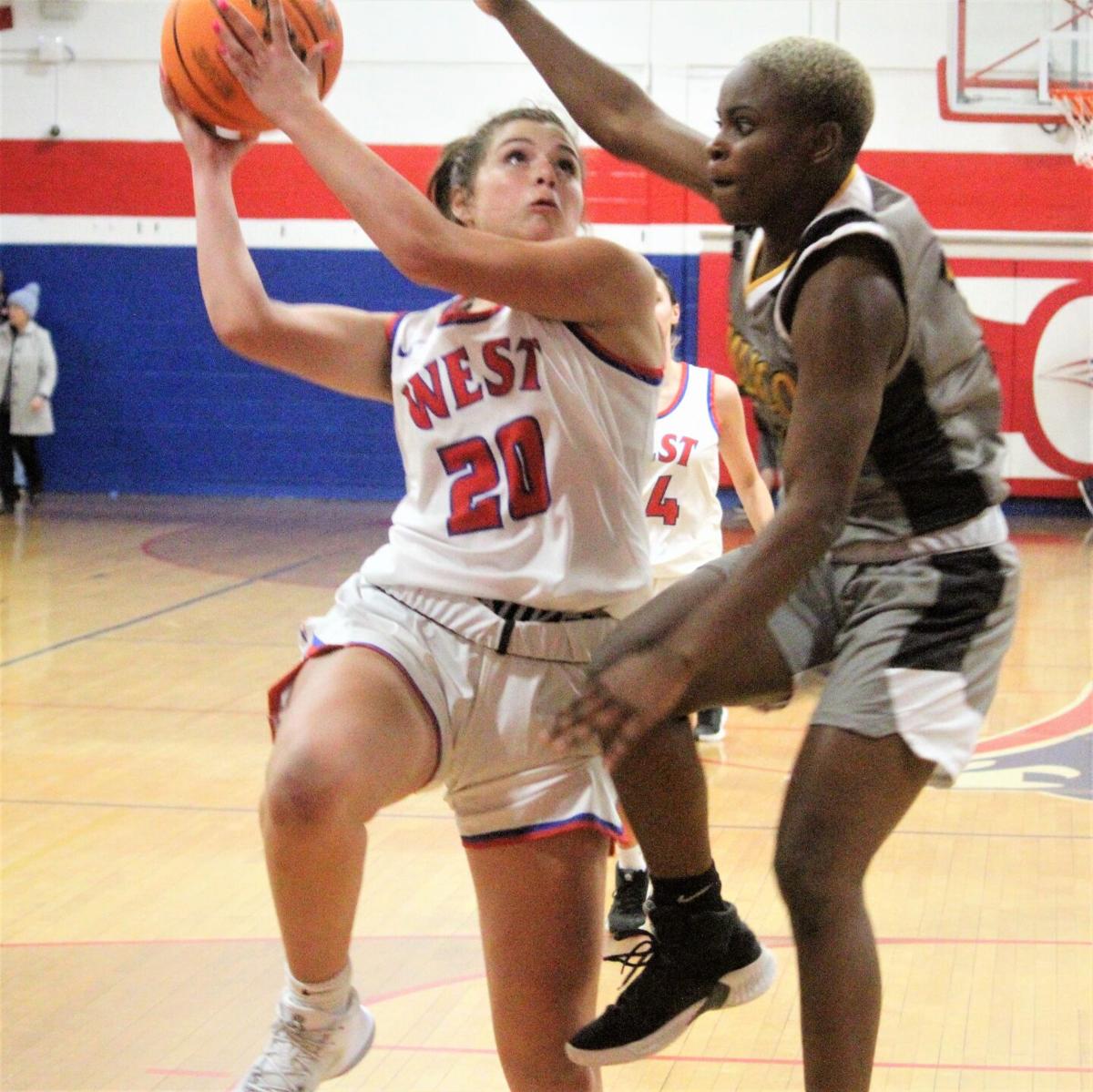 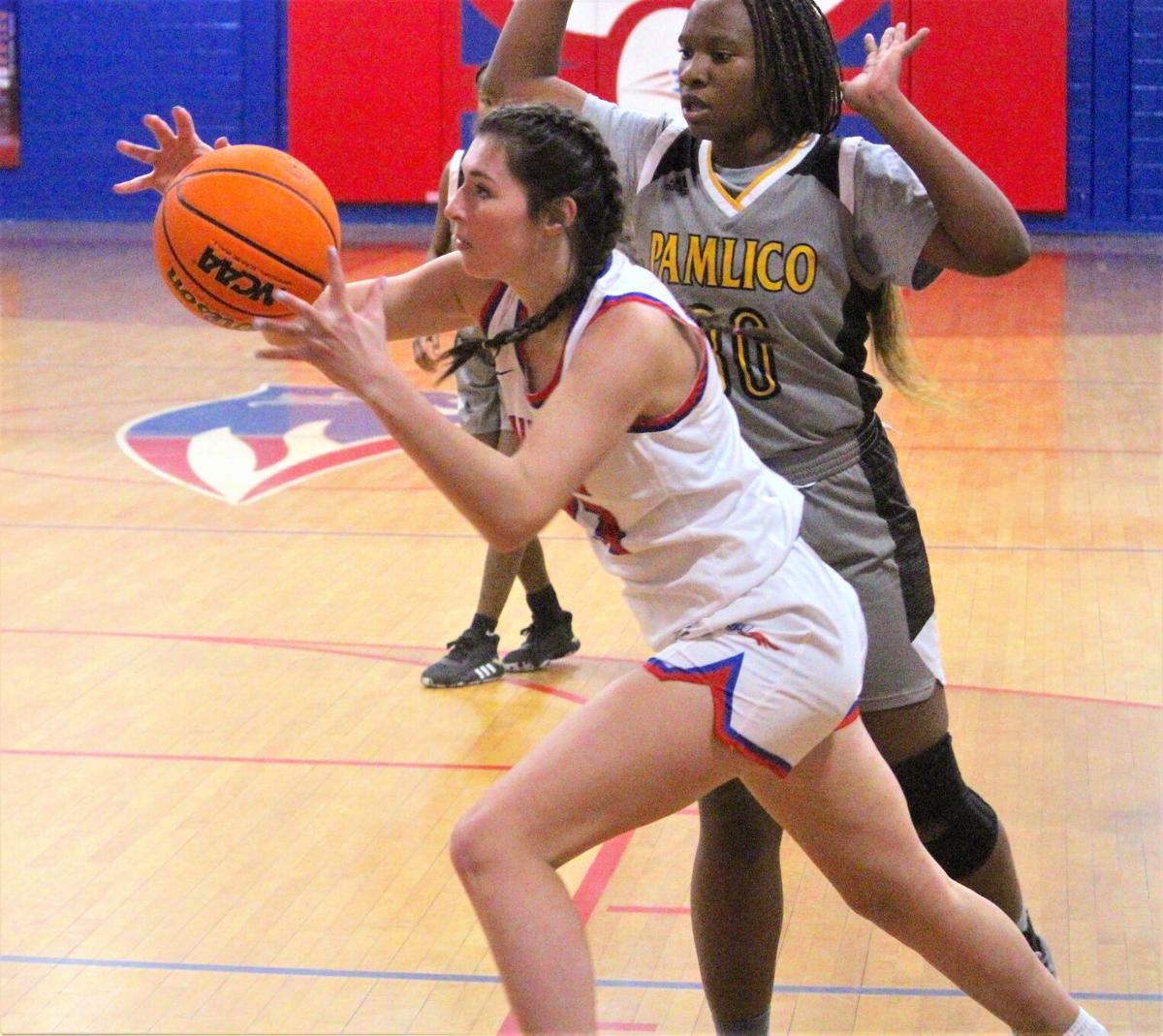 Maura Huber was one of six West Carteret players with at least four points in the 40-25 victory over Pamlico. (J.J. Smith photo)

West Carteret’s Lily Green reaches for the ball in the 40-25 victory over Pamlico. The Patriots’ defense shut down the Hurricanes, giving up just 15 points over the last three quarters. (J.J. Smith photo)

Maura Huber was one of six West Carteret players with at least four points in the 40-25 victory over Pamlico. (J.J. Smith photo)

MOREHEAD CITY — West Carteret didn’t have to wait long to get the bad taste out of its mouth after the season opener.

The Patriots rebounded from a 61-19 loss to South Central on Monday with a 40-25 victory over Pamlico on Tuesday in their home debut.

“It was really nice to get right back on the court after yesterday and get at it again and get a win,” girls coach Lindsey Howell said. “We didn’t have to think about last night too much.”

West still looked a little woozy from the previous night’s knockout punch, trailing 10-6 after the first quarter, but then outscored the visitors 28-10 over the next two frames to hold a 34-20 advantage heading into the fourth.

Defense turned to offense with the Patriots swiping steals and blocking shots, leading to easy baskets on the other end.

“Once we really started playing defense like we want to play and not reaching quite so much, that turned the game around,” Howell said. “We kept them in the first half with our fouling. That got better.”

The Hurricanes recorded just five field goals in the game, scoring 10 points from the floor. They shot 30 free throws, connecting on 15. They went 9-for-14 in the first half and 6-for-16 in the second. Mya Smith led the way with a game-high 11 points, hitting 9-for-14 from the three-throw line to go with one field goal.

The home team went 6-for-12 from the foul line.

Emme Baber showed how much she was missed last year when she tore her ACL in the preseason. The senior point guard hit double figures for the first time in her four-year varsity career, going for a team-high 10 points.

“It’s nice to see her out there,” Howell said. “She plays her heart out every possession. I just love having a player like her on the court.”

West showed off its depth with eight players scoring and six reaching at least four points.

“She played well again tonight. Skyler is going to be able to take some of the point guard burden off of Emme.”

Pamlico was also a fresh off a loss, but a much more competitive one, having outscored Havelock 16-5 in the fourth quarter to force overtime before falling 49-45.

The Bayboro squad didn’t show up with its usual state championship contender status versus West with just five players getting minutes and only one player on the bench.

“We have six kids total, one who has never played,” coach April Rose said. “We’ve got two injuries right now, so hopefully we can get them back. We’re rolling with it, trying to figure out who we are and what are we doing.”

The Hurricanes lost their top three scorers from a team that looked like it might make another run to the state final, going 8-0 before it was ruled ineligible for the playoffs after entering COVID-19 protocols. Included among those three was Mirachell Maher, who averaged 20.4 points and 12.0 rebounds in her senior season.

“We’re still a little bitter about last year, how it ended,” Rose said. “It could have been a great year. Last year was so crappy to us, we’re hoping to get back into the swing of things. We’re starting over.”

Pamlico, which went to three straight state championships from 2017-2019, winning it all in 2019, had to watch last year as Northside-Pinetown moved to the regional final with a 51-45 win over East Carteret in the third round. The Hurricanes beat the Panthers by 42 points and 24 points, respectively, in their two conference matchups.

Despite the limited roster, Rose’s team is looking at a tough nonconference schedule including West, Havelock, West Craven, Holmes, Croatan and South Central.

“It’s so hard to be in this position, but we’re going to work hard,” she said. “Our nonconference schedule is tough. It’s always tough. I didn’t veer from that. If it doesn’t kill us, I hope it makes us stronger.”

“We want to make sure the toughest games we play are in November and December, and heading into January, we are hitting our stride,” Howell said.

The Patriots will have a busy schedule this coming week, traveling to East Carteret on Tuesday, and then hosting New Bern on Wednesday, Dec. 1 and traveling to Havelock on Friday, Dec. 3.