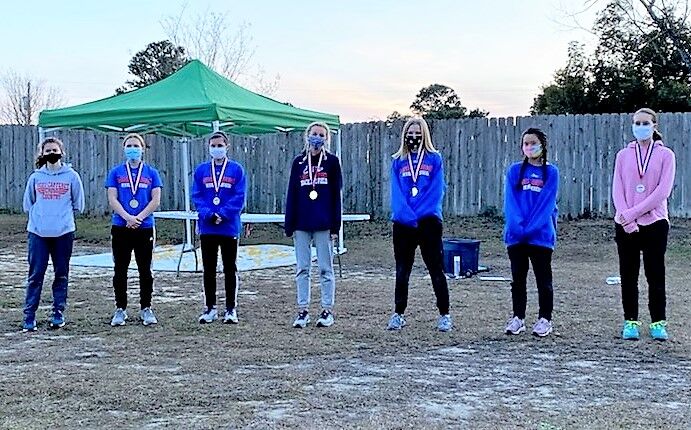 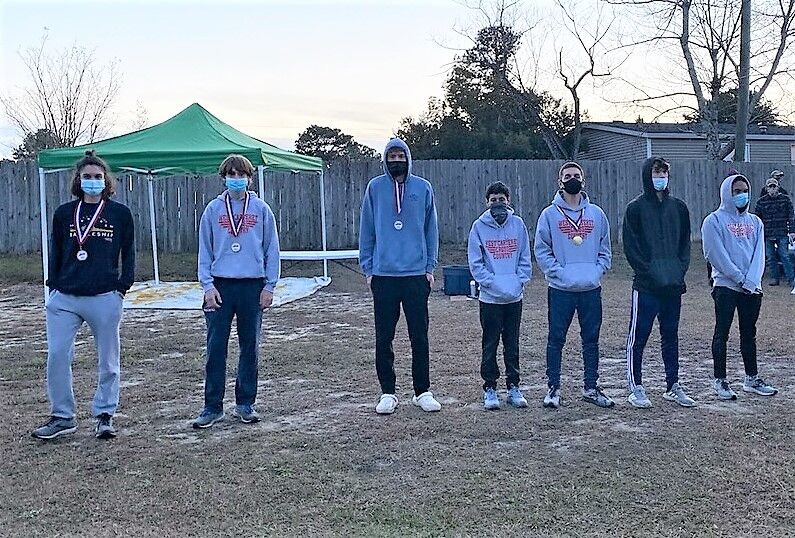 JACKSONVILLE — This should be the last year featuring West Carteret runners who were still alive when the girls cross county team began its conference championship streak.

That’s how long it’s been.

In what has to be one of the longest winning streaks in the state, regardless of sport, the Patriots captured their 18th consecutive league title at the 3A Coastal Conference championship meet on the Northeast Park course at Jacksonville.

This year’s crown was one of the more comfortable ones in a streak that goes back to 2004.

West put up 29 points to pull away from Jacksonville with 59, White Oak 71 and Swansboro 75. Northside-Jacksonville didn’t compete in the race.

West’s Eliza Craig Parker coasted to the win in a personal record 19 minutes, 33 seconds. Jacksonville’s Madison Hilliard was the runner-up in 20:17.

“It was great to see EC win, but what was more impressive was how she did it,” West co-coach Larry Lewis said. “She was pressed at the beginning of the race by Jacksonville runners, quickly retook the lead and never looked back.”

The Patriots took seven of the top 13 spots with Morgan Mason placing fourth in 20:33, Grace Guilford finishing seventh in 21:40, Ansley Jones earning eighth in 21:48 and Sara Windsor rounding out the all-conference performers in ninth with a 21:49 clocking.

Guilford ran a personal record in the meet.

“She just barely missed all-conference last year, and she was determined to not finish 11th this year and miss all-conference,” Mayo said. “When it is time to race, she can pick it up a notch and compete.”

Jones was the top freshmen finisher in the race.

“She will be one to watch in the bright future she has before her,” Mayo said.

The West boys appeared primed to place second in the conference for the second year in a row after finishing behind White Oak in every race this season. However, the Patriots defeated the Vikings by 12 points in what the coaches called the highlight of the season thus far.

“It was a great team effort at the right time,” Lewis said. “There were 48 seconds between runners one though five. The boys are getting better as a team each race.”

The boys won their seventh league title in the past 10 years with 35 points, followed by White Oak with 47. Swansboro was third with 50, while Jacksonville had 122 points. Northside-Jacksonville didn’t compete in the race.

“Most of the boys ran personal-best times or season-best times, and that is what it took to win conference,” Mayo said.

Consistency and balance provided the Patriots with the championship as they didn’t have a top-three finisher but garnered six of the nine spots between fourth and 12th.

“He really stepped up for us,” Lewis said.

Hunter Guthrie took seventh in a personal record 17:56, followed by Landon Gray in eighth in 18:02 to close out the all-conference honorees.

Rob Cummings and Carter Bass finished just outside the top 10 with personal records, taking 11th and 12th, respectively, with Cummings timing in at 18:30 and Bass stopping the watch at 18:32.

“We did feel bad that they just barely missed making all-conference,” Mayo said. “This was their first year running cross country, and they have a lot to be proud of.  Carter was the first ninth grader in the conference and has a bright future ahead of him as well.”

The Patriots will now turn their attention to the 3A east regional Saturday at Boyd Lee Park in Greenville.