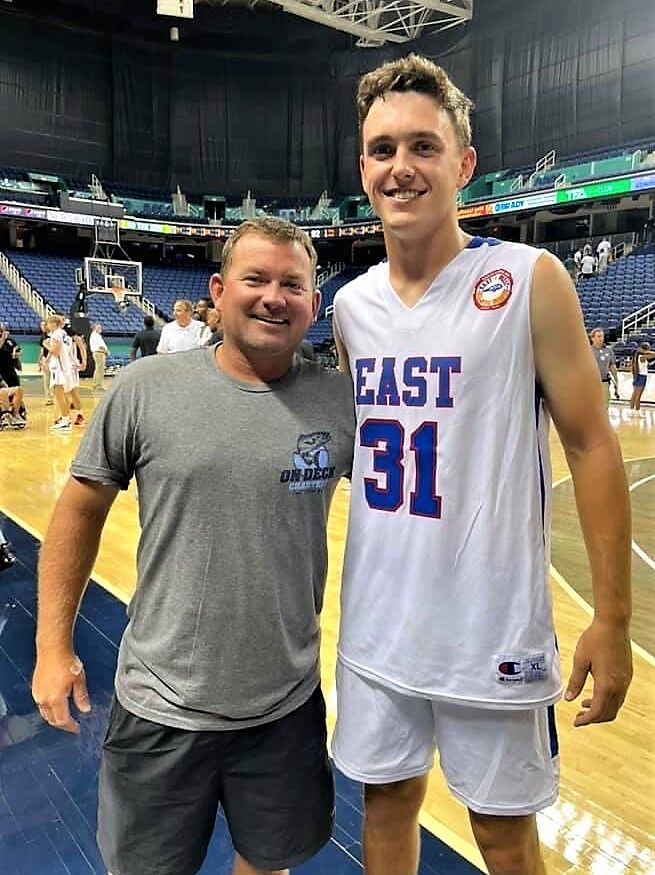 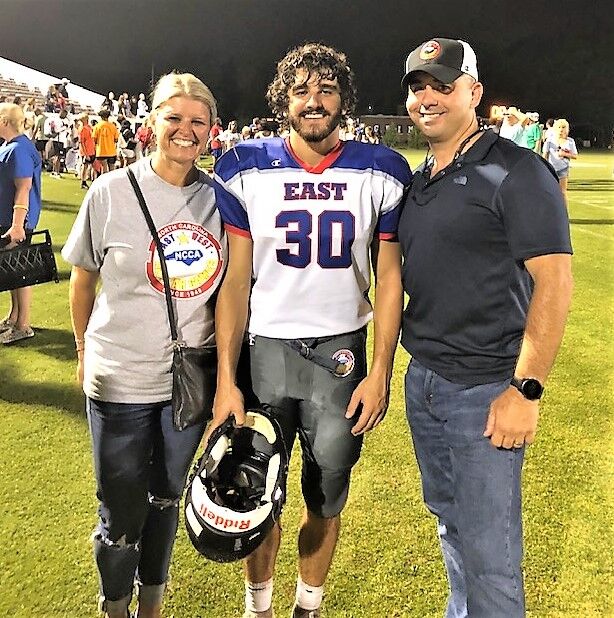 Croatan’s Colton Sullivan, between parents Summer and Jason, had 22 yards on eight carries to go with 13 yards on one catch in the East-West All-Star Game. (Contributed photo) 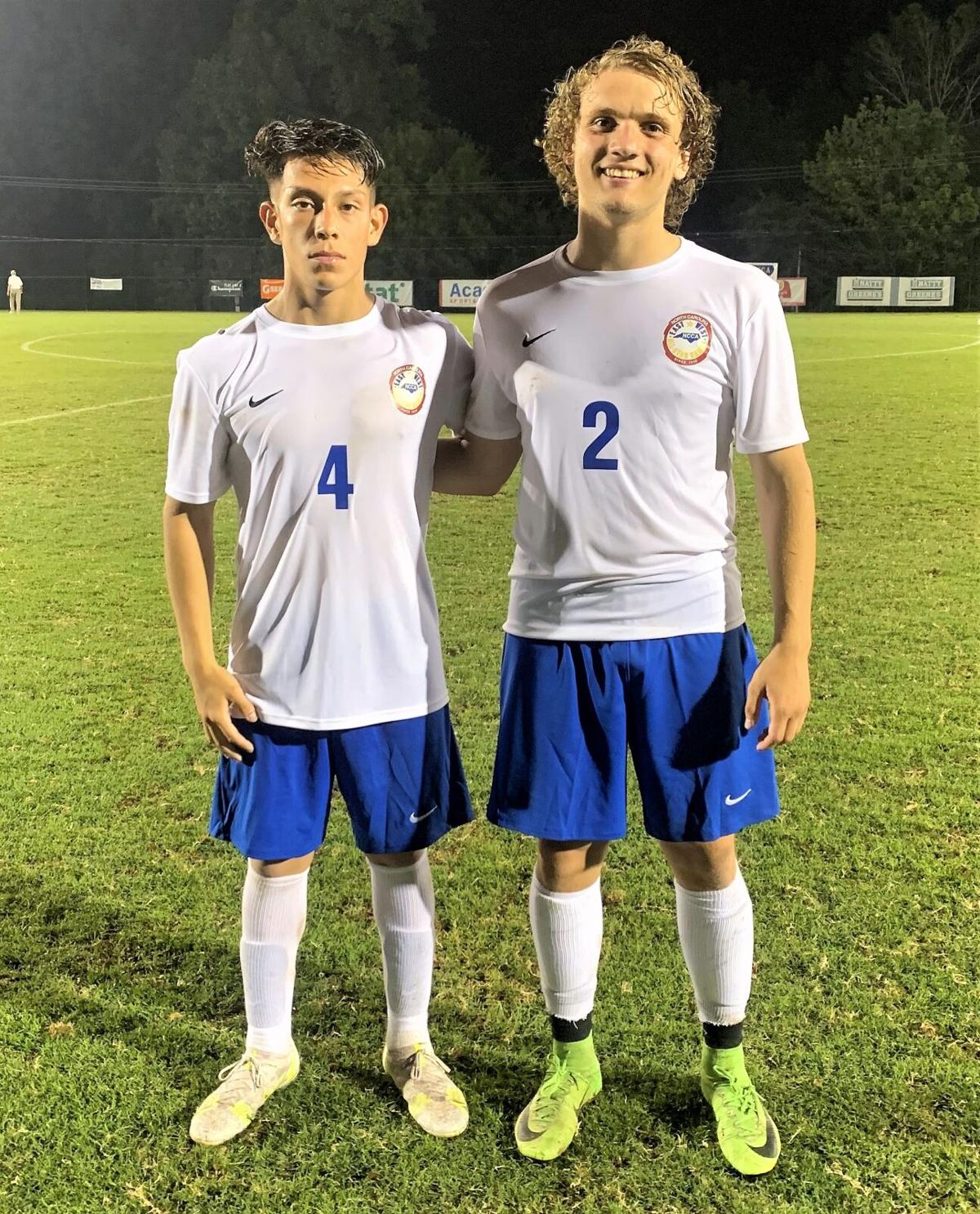 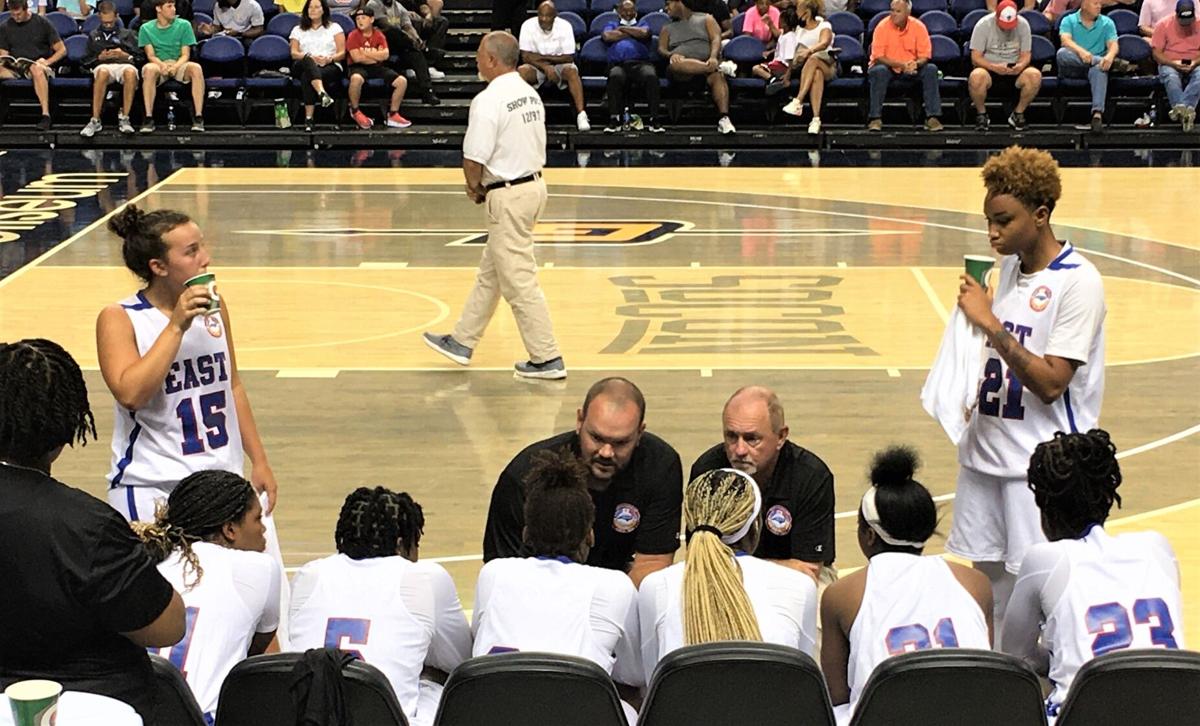 Croatan’s Colton Sullivan, between parents Summer and Jason, had 22 yards on eight carries to go with 13 yards on one catch in the East-West All-Star Game. (Contributed photo)

Traditionally, the games are held during the third week of July in conjunction with the N.C. Coaching Clinic. The games are played on consecutive nights, beginning with the two basketball games on Monday. Soccer follows on Tuesday and football on Wednesday.

The recent East Carteret graduate led the East team with nine rebounds and tied for a team-high three steals as his squad cruised to a 116-92 victory at the Greensboro Coliseum.

“I felt like I played good,” he said. “I played hard, hustled, was just trying to being aggressive.”

“My free throws were a little off,” he said. “It’s different shooting in that kind of gym. It took some getting used to.”

Brooks played 26 minutes, which tied for second-most on the team with two other players. He held up better than he thought he would in those extended minutes.

“I was very surprised my wind held up,” he said. “I did some running leading up to it, but not as much as I should have.”

Farmville Central’s Smith, the Gatorade Player of the Year, led the East with 30 points to earn MVP honors.

“Those guys I was playing with were going to big-time schools, so being able to run with them gave me confidence,” Brooks said. “There was a lot of good competition. It was a great experience.”

The recent Croatan graduate rushed for 22 yards on eight carries and added 13 yards on one catch in a defensive standoff.

His East team fell 7-0 as neither team reached 160 total yards.

“The defenses were stout on both sides,” Sullivan said. “The linemen were in the backfield the whole time. The linebackers and secondary were really good.”

The East offense went for 30 rushing yards on 29 carries, while the West went for minus-2 yards on 26 carries.

“Neither team did too much damage on offense,” Sullivan said. “They stopped us from getting loose. You expect that with good competition. I was glad I got to play against that level of talent. It’s a lot of fun when everyone is so good.”

Sullivan said he felt like he belonged in a game that featured a number of college commits.

“I was a little uneasy in the beginning, because rolling up and seeing a bunch of big dudes, I didn’t know,” he said. “But when I got on the field, I felt good.”

Sullivan also plans on playing college football as he hopes to transfer to Samford (Ala.) after some time at community college.

“He said he had a house in Emerald Isle, so he’s coming down this weekend, and he’s going to come to my graduation party,” Sullivan said.

Hezekia Newby (Eastern Guilford) broke a scoreless tie with 8:13 left in the third quarter with a 1-yard touchdown run on a play that was set up by a 38-yard pass from Brody Whitson (T.C. Roberson) to Caleb Borders (Crest).

“Unfortunately, we weren’t unable to come out with the win,” Sullivan said. “We gave up one big play on a pass over the top, but that was it. Other than that, it was pretty even in yards.”

The recent Croatan graduate finished his last official high school game on the winning side as the East defeated the West 3-2.

“Luckily we came out with the win, so that was nice,” he said. “Everyone was really eager to play their last high school game, and for some, it was their last chance to play a competitive soccer game.”

Garner-McGraw, who played 46 minutes at right wing and right midfield, said the East took advantage of four workouts before the game.

“It was a great experience,” he said. “We had a lot of practice time, so we got a chance to bond with our teammates. And then we rotated well in the game, which gave everyone a chance to show what they can do.”

After an own goal gave the East a 1-0 advantage, Holly Springs’ Drew Lovelace, a Wofford signee, scored on an individual play. He made it 3-0 early in the second half with a perfectly-placed laser from the top left corner of the box.

Lovelace, the game MVP, was one of many college signees in the contest, leading to a contest made up of talented players.

“I wasn’t really nervous going up against that competition,” Garner-McGraw said. “I just went out there to entertain. I knew it would be challenging, but after practices, I was pretty confident.”

The longtime Croatan girls basketball coach, who also serves as the school’s football coach, found himself on the losing side of an 87-66 contest.

The West took the contest despite not shooting as well (35 % to 37 %) but used its height advantage to hold a 59-50 advantage in rebounds, including 23-16 on the offensive end. The West also came away with 19 steals, combining with the rebounding strength, leading to 12 more field-goal attempts and three more made buckets (28-25). The West also made 12 more free throws.

“I hate that we didn’t win the game. That is why you are there, but we put on a good show,” he said. “And 20 years from now, I’ll remember the time and experience I had.”

Enka's Emily Carver, an Appalachian State signee, was a dominant scoring force for the West and a factor on the boards, finishing with 20 points and nine rebounds to go with four assists.

The East was forced to knock down shots from outside, and Knightdale’s Diamond Thomas, a N.C. Central signee, provided much of the offense, finishing with a game-high 21 points.

“Those girls could do it all on the court,” Gurley said. “We had all but one going to play in college, and the West was the same way. The kids were great. We had a ball. We couldn’t have asked for a better group of girls.”

Gurley served as an assistant under Donald Mooring of South Lenoir.

“I learned a lot from the girls and from coach Mooring,” Gurley said. “It was cool to be up there with him. I can’t think of anybody I’d have rather coached with than him. We had a great time, getting to know each other, learning from each other.”

Gurley’s wife and children surprised him at the game Monday night, and combined with coaching at the Greensboro Coliseum, his experience was complete.

“I walk out of the locker room, and there they were,” he said of his family. “It was definitely neat coaching at the Greensboro Coliseum with all the history and tradition, to be on the same floor where some of the great ones played.”