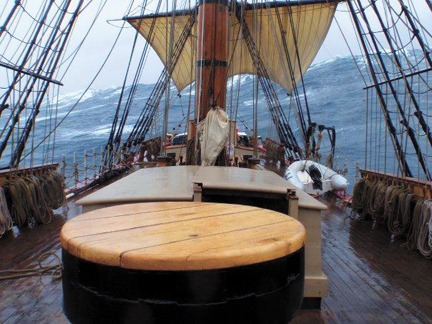 This photo from the Bounty’s Facebook site shows the seas and winds the doomed ship encountered before sinking. (Bounty Facebook photo) 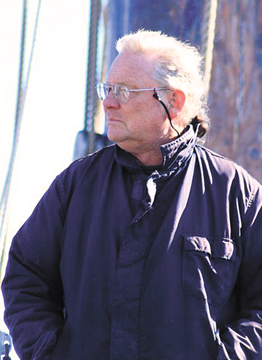 This photo from the Bounty’s Facebook site shows the seas and winds the doomed ship encountered before sinking. (Bounty Facebook photo)

Capt. Anthony Popiel, Commander Sector North Carolina, said Thursday morning the search for the missing captain covered nearly 5,000 square miles. At that time, it was still designated a rescue effort and not a recovery. All that changed by 7 p.m. that day.

The Coast Guard continued the search until Thursday because it felt there was a chance Capt. Walbridge could still be alive. Capt. Popiel said the Bounty’s captain was in good physical condition and was seen wearing a water survival suit designed to maintain the body’s normal temperature. The water temperature was 77 degrees Fahrenheit and seas at the search site were 15-20 feet.

Capt. Popiel said the Coast Guard used a systematic approach to try to locate the captain by deploying self-locating data marker buoys to account for wind and water direction.

According to the captain, a C-130 Hercules and the Gallatin, a 378-foot high-endurance cutter from Charleston, S.C., were used, but then called back to port.

Rear Adm. Steven Ratti, the Coast Guard 5th District commander, ordered a district formal investigation Thursday to determine the cause of the sinking of the tall ship. A district formal investigation consists of a Coast Guard investigating officer who will receive evidence and testimony using formal rules and procedures and is convened when the information to be derived has considerable regional significance, or may indicate vessel class problems or areas of technical importance.

The district formal investigation will probe every aspect of the accident and will determine as closely as possible the following:

•    Whether there is evidence that any failure of material or equipment was involved or contributed to the casualty.

•    Whether there is evidence that any act of misconduct, inattention to duty, negligence, or willful violation of the law on the part of any licensed or certificated person contributed to the casualty.

•    Whether there is evidence that any Coast Guard or other government agency personnel caused or contributed to the casualty.

•    Whether the accident should be further investigated by a Marine Board of Investigation.

“It can be a lengthy process,” Capt. Popiel said. “But, it will be thorough.”

The Coast Guard Coast Guard Sector North Carolina initially received a call from the owner of the Bounty saying communication with the vessel’s crew was lost late Sunday evening.

The Coast Guard 5th District command center in Portsmouth, Va., later received a signal from the emergency beacon registered to the Bounty confirming it was in distress and its position. Winds at the time were reported at 40 mph and wave heights were 18 feet high.

The Hercules aircrew launched and after arriving on the troubled ship’s location, re-established communications and learned the vessel was taking on water. It eventually sank in about 8,000 feet of water, according to the Coast Guard.

The U.S. Coast Guard Cutter Elm from Station Fort Macon was involved in the search – returning to port Wednesday after it was launched Monday – and its commanding officer, Capt. Mark S. Palmer, described the search effort.

Capt. Palmer said after receiving a phone call about 5:30 a.m. Monday from sector command in Wilmington, he and a crew of 48 men and women departed Fort Macon at 7:30 a.m.

It took the cutter 11 hours in treacherous conditions to reach the Bounty’s location that evening where the vessel assumed command of the search.

“We were running full speed and at times had 5 feet of water running across the deck,” the captain said.

“When we arrived, it was getting dark, the Bounty was floating on her side, and we could see the masts. It was sad to see,” he said.

The Hercules and an MH-60 Jayhawk helicopter from Coast Guard Air Station Elizabeth City arrived and joined in the search Monday. The helicopter crew soon began picking up survivors found aboard life rafts among other debris from the sinking ship.

The search crews were joined Tuesday by an HC-144 Ocean Sentry which is a medium-range, twin-engine aircraft, and a Hercules helicopter crew from Coast Guard Air Station Clearwater in Florida.

Capt. Palmer said with the aid of lights and night-vision goggles, the ship began a search pattern established by the command center; however, being on the water, weather and water conditions posed challenges for the Elm and her crew.

The captain said launching small boats from the Elm in order to pick up debris, some of which was identifiable with strobe lights, was not possible, as his first job was to consider the safety of the crew.

“During our search, we found survival suits, storage chests and we could see strobe lights blinking as late as Tuesday night,” Capt. Palmer said. “We just could not get a break from the weather. But, we went out there and did our job and I am very proud of the people of this crew. They went beyond. I couldn’t ask for a better crew.”

The 14 rescued crew members were flown to Coast Guard Air Station Elizabeth City. Medical personnel were waiting for them there.