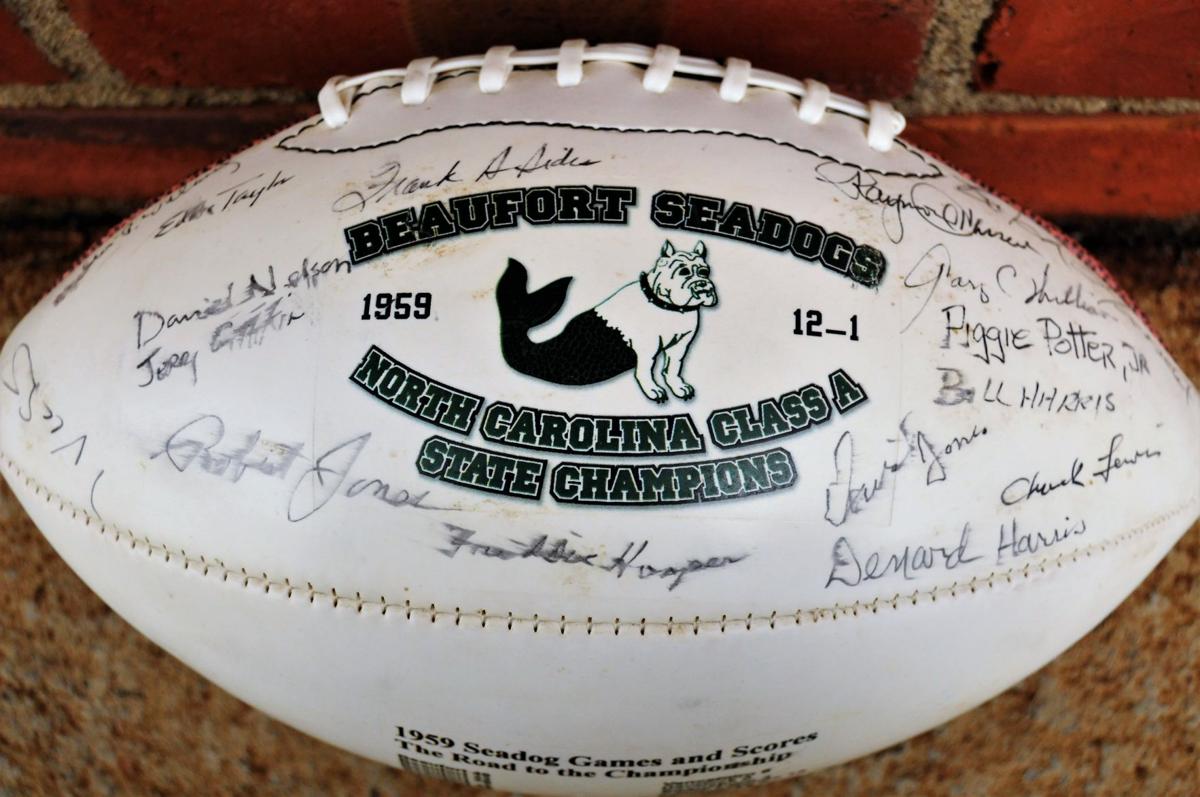 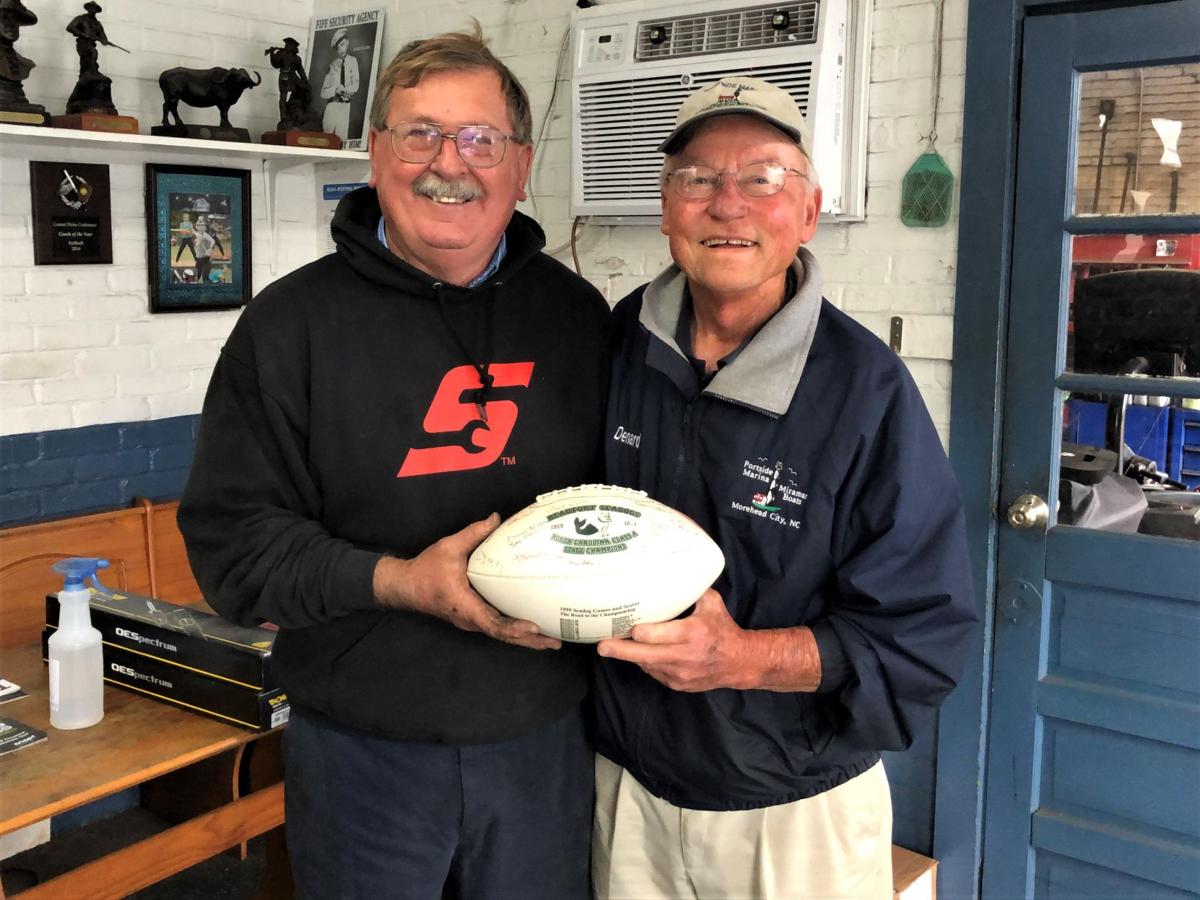 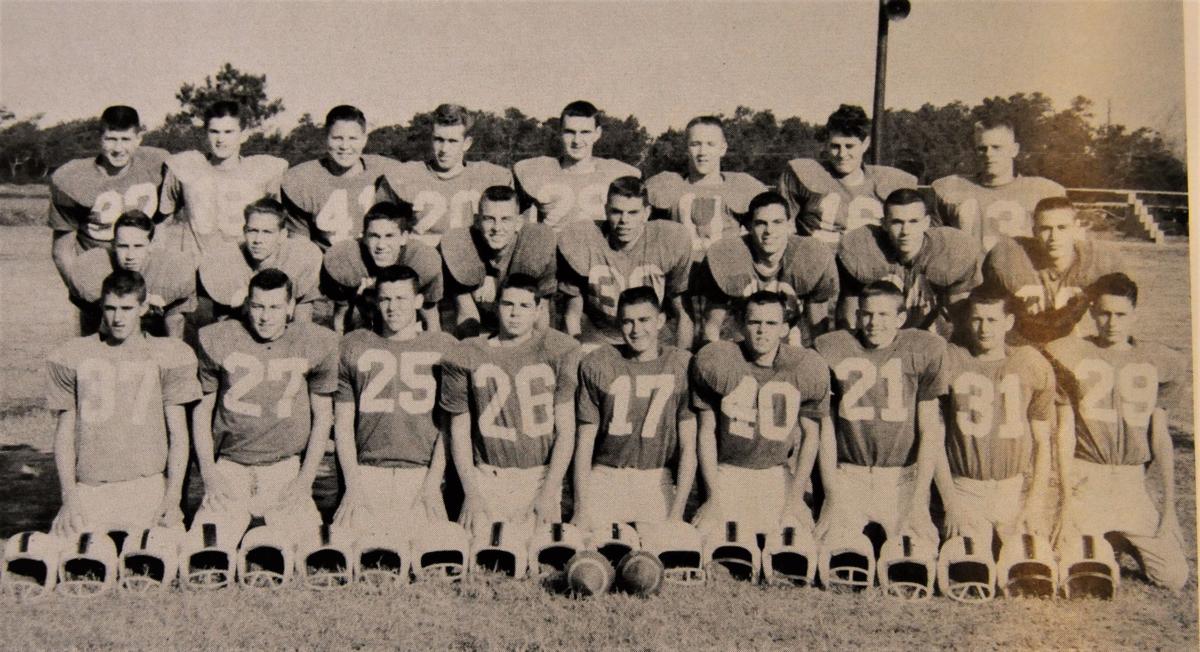 BEAUFORT — About this time 60 years ago, the Beaufort High School senior class of 1960 was preparing to graduate. Nearly six months earlier, a few of those seniors helped capture the 1A state crown with a 20-0 win over Andrews.

Mark Chadwick recently received a reminder of that title season. A friend brought him a commemorative football originally signed by 16 members of the Seadogs squad.

“My friend Josh Landt brought it to me,” said the owner of Marks Tire & Alignment and the former longtime softball coach at East Carteret. “He was going through a box at Loaves & Fishes (Thrift Shop) and found it.”

Knowing Chadwick’s background in sports, not to mention his proximity to the old school – his business sits across Live Oak Street – Landt assumed his friend might know someone who would be interested in the ball.

“I told him, ‘Yeah, I know someone who would be interested in it … me,” Chadwick said with a laugh. “I’d like that for myself.”

Chadwick and his wife, Janice, took photos of the ball and posted them on Facebook, drawing plenty of interest from history buffs.

Denard Harris, owner of Portside Marina in Morehead City, and a starting linebacker and offensive tackle on the state championship team, made a beeline to Chadwick’s Tire & Alignment when he learned about the ball.

“I had forgotten about it, but it’s got my name on it, and a lot of the other guys on the team,” he said. “We celebrate our 60th year reunion this year. It certainly doesn’t feel like it’s been 60 years. It went by pretty fast.”

Harris, a co-captain alongside fellow seniors Butch Hassell, Calvin Jones and Freddie Hooper, was part of a football program that still stands in the N.C. High School Athletic Association record book to this day.

Beaufort didn’t allow a single point in the 1959 playoffs and then didn’t surrender a point in the following nine games during the subsequent season for a total of 13 consecutive shutout contests. That mark stands tied for second in NCHSAA history.

“We ran a 4-4 defensive front where you would jump in the gap,” Harris said. “We were wiry, quick fellas. It was the right defense for our talent.”

The Seadogs gave up just 42 points in a season that saw the team go 12-1. They allowed only 3.2 points per game and didn’t surrender more than 15 points in a game – that came in a 15-7 loss to Camp Lejeune. They registered seven shutouts with the most important one coming versus Mount Olive in the second round of the playoffs.

The game ended in a 0-0 tie, but Beaufort took the victory via tiebreaker by holding the advantage in yards gained (257-175).

“I remember David Jones and Eddie Taylor, two really fast guys, tackled a guy on the 2-yard line, the guy fumbles and we recover,” Harris said. “So, we’re 98 yards away with about three minutes to go in the game. And about the 50-yard line, coach got the word we had gotten past them in yardage, so we just needed to hold on to the ball. We held it till the end of the game and won.”

The following game, played on the East Carolina field, followed a similar script with Norlina fumbling in the final minutes. This time, Beaufort scored late to take a 7-0 triumph on the Friday after Thanksgiving and advance to the state championship game.

The Seadogs, despite suiting up only 19 players, had little trouble with Andrews to earn the title on their home field, capturing a 20-0 win.

“Those mountain boys weren’t used to playing in the sand in Beaufort,” Harris said. “We were a bunch of flatland fishermen. We were used to it. It was like a dust bowl. About every five plays, we had to get the water bucket and wash the sand out of (quarterback) Butch Hassel’s eyes and nose and mouth. We just had a little more speed and were able to score on them.”

Two other games stood out that season.

In a 26-6 victory over Robersonville in the seventh game of the campaign, a sandy field was hardly the problem. A strong tide rose up and covered part of the field up to the 25-yard line.

“The decision was made to play on half the field,” Harris said. “The 50-yard line was the end zone. We ended up playing the whole game like that and ended up winning. That is a great memory.”

In the final regular season game of the year, the Seadogs broke Morehead City’s eight-game Mullet Bucket winning streak with a 14-6 home victory in front of 4,000 fans.

“They had beaten the crap out of us the year before, so it was nice to finally beat them,” Harris said. “That was a big rivalry. Morehead was always really good.”

John Nelson’s 45-yard fumble return for a touchdown started the scoring in the Mullet Bucket, and a 29-yard scoring toss from Hassell to Calvin Jones finished it as the trophy was brought back to Beaufort for the first time since 1951.

First-year coach Curtis Lancaster, who had just graduated from East Carolina a few months earlier, talked his players out of dunking him in the showers after the game. He did tell his squad, however, that he would be more than happy to let them partake of the traditional post-game celebration if the team won the state title.

The players cashed in on that promise weeks later, dunking assistants Tom Hewitt, Jimmy Fodrie and Lancaster in the showers.

Six years later, the Seadogs were done when East Carteret opened up in 1965, bringing an end to Beaufort High.

The buildings, some of which have been designated historic by the town, have been deteriorating since students were moved to a new facility on Carraway Drive in 2003.

“I drive by and can point to my first-grade classroom, my eighth-grade classroom, both right there by the street,” Harris said. “We had good times there. We were graduating 60 years ago right about now. Our class was filled with an unusual mix of people with a lot of talent.”

Great Story JJ. Thanks for sharing.

It should go back to a showcase!