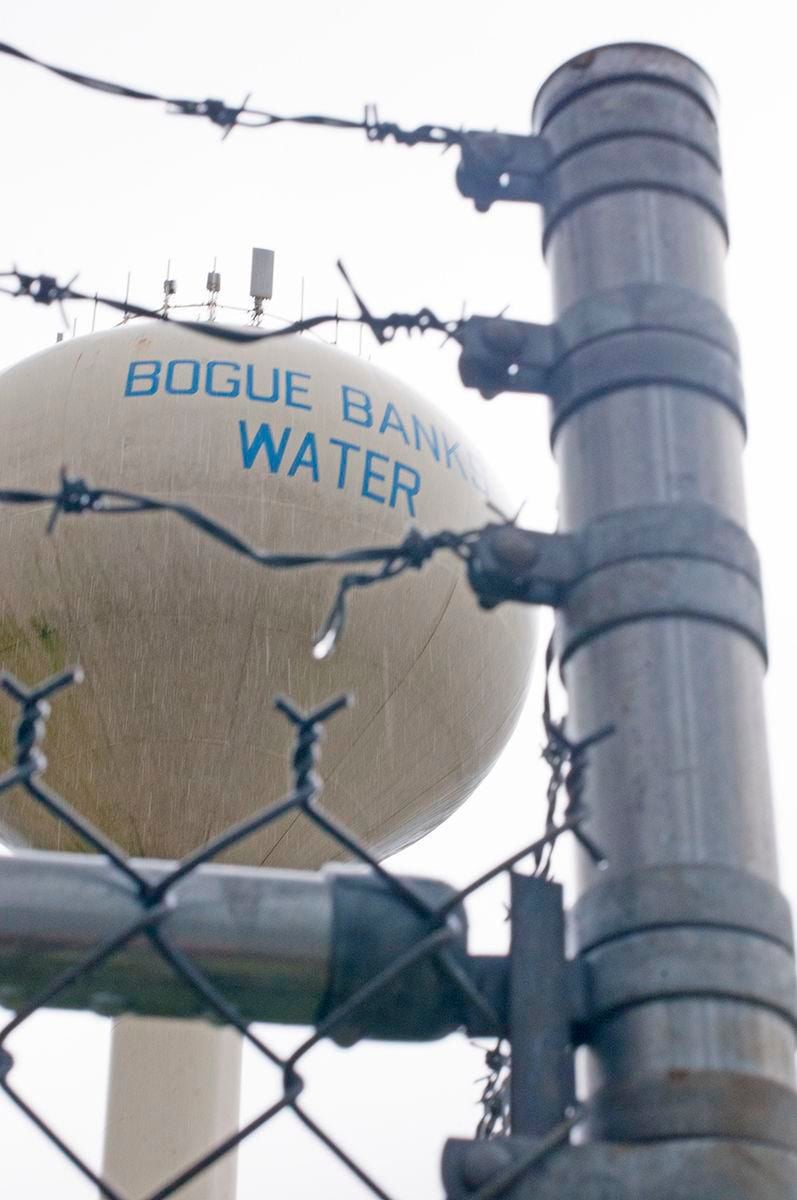 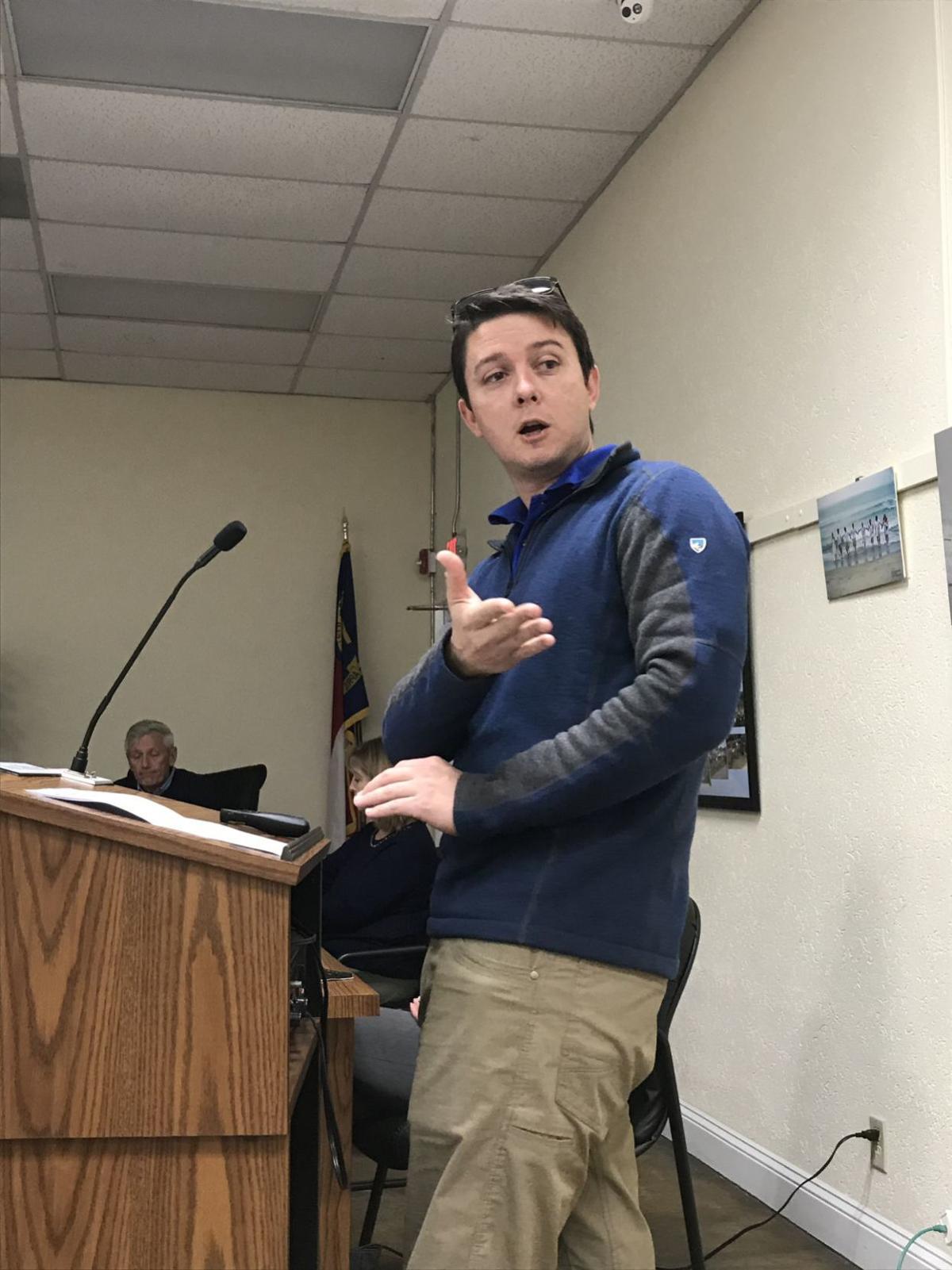 Seola Hill of Bogue Banks Water Corp. outlines a plan to lease space for a new well during an Emerald Isle Board of Commissioners meeting in February. (Brad Rich photo)

Seola Hill of Bogue Banks Water Corp. outlines a plan to lease space for a new well during an Emerald Isle Board of Commissioners meeting in February. (Brad Rich photo)

EMERALD ISLE — Bogue Banks Water Corp., in its latest newsletter, said a new well and treatment plant are the solutions to a non-emergency Trihalomethane problem found in recent samples.

The company early this year proposed to lease from the town of Emerald Isle for a new well site behind the police department-recreation center complex in McLean-Spell Park, but approval of the site has been held up by opposition and the novel coronavirus pandemic’s impacts on town board meetings.

Town Manager Matt Zapp said Monday he hopes to get the approval process back on track during the board of commissioners’ meeting in July or August.

The well issue first came before the town board in February, when residents on Sound Drive near the park spoke out against the company’s plan to lease space there. At the time, Mayor Eddie Barber said there would be a formal public hearing in March or April on the proposed lease. Then the pandemic hit and the state issued guidelines to limit the size of gatherings, including those in governmental meetings.

“We had to pause discussions due to the limitations resulting from the COVID-19 pandemic,” Mr. Zapp said Monday.

“It is the intent … to bring the topic forward, once physical attendance to public meetings is more permissible.”

The well-lease discussion is expected to draw a big crowd.

According to the newsletter from the water company, which also serves Indian Beach and Salter Path, TTHMs (total trihalomethanes) in the water exceeded federal standards at one of two sample sites, near Timber Trail on the sound side of the eastern end of town. TTHM samples taken off Coast Guard Road, at the western end of town, were below the maximum allowed, the company stated.

Trihalomethanes are chemical compounds used as solvents or refrigerants. They are considered environmental pollutants, and some are considered carcinogenic. They are byproducts of using chlorine as a disinfectant, according to the company.

The BBWC newsletter article, written by Executive Director Seola Hill, tells customers their water “is still safe to consume, and we have been implementing various new equipment to help bring the levels of TTHM's back down.

“The western end of the system’s (TTHM) levels are … low due to the reverse osmosis treatment plant (on Coast Guard Road, near its intersection with Highway 58),” the newsletter adds. “It removes everything from the water prior to disinfectant thus eliminating the problem before it can happen.”

The company, however, said in February the new well is necessary before a second reverse osmosis plant can be built.

“Once built, the new plant should double our production capacity for reverse osmosis-treated treated water all year long,” the newsletter states.

It also advises water customers they don’t need to boil their water or take other corrective actions. However, it adds, “…if you have specific health concerns, consult your doctor. If a situation arises where the water is no longer safe to drink, you will be notified within 24 hours. “This is not an emergency,” the letter continues.

It adds, however, “some people who drink water containing trihalomethanes in excess of the MCL over many years may experience problems with their liver, kidneys, or central nervous system, and may have an increased risk of getting cancer.”

The article states the company has installed mixers in its water towers and will install power vents to release Trihalomethanes into the air from the mixing. The company will also do more flushing of the water system at the eastern end of town.

Mr. Hill pitched the lease plan to town commissioners during their Feb. 11 meeting. He could not be reached for additional comment Monday.

Residents of nearby Sound Drive voiced opposition based on aesthetics and the company’s need to cut down about 60 trees to clear a 200-by-200-foot site.

Mr. Hill told the News-Times later that month the company spent about a year looking for a site and has no other viable options because it was limited by a lack of suitable property for sale and by saltwater intrusion farther west along the Coast Guard Road corridor. Wells also must be at least 1,500 feet from each other.

The town bought the 30-acre tract known as McLean-Spell Park for a nature park in 2017.