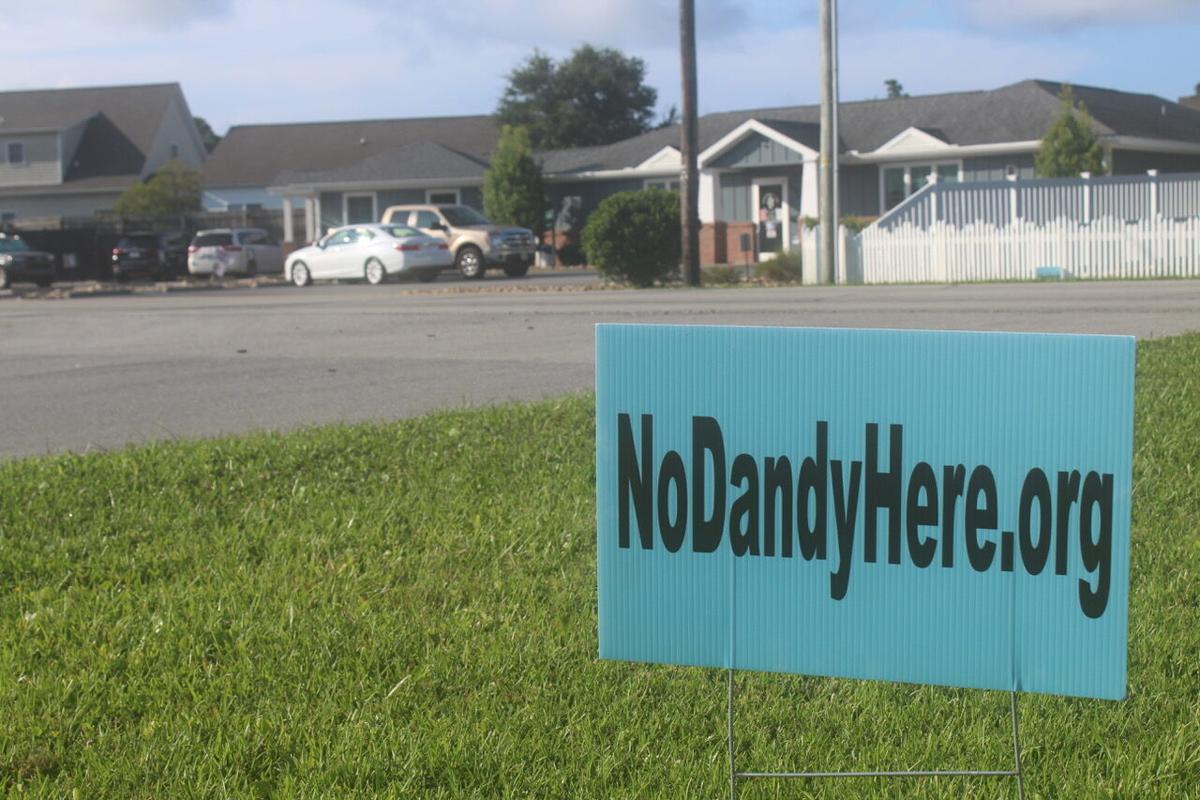 A sign advertising a community-launched website opposing a plan for a Jim Dandy fueling station and convenience store sits in a yard directly across from the location proposed for the business, 1550 Lennoxville Road in Beaufort. (Jackie Starkey photo) 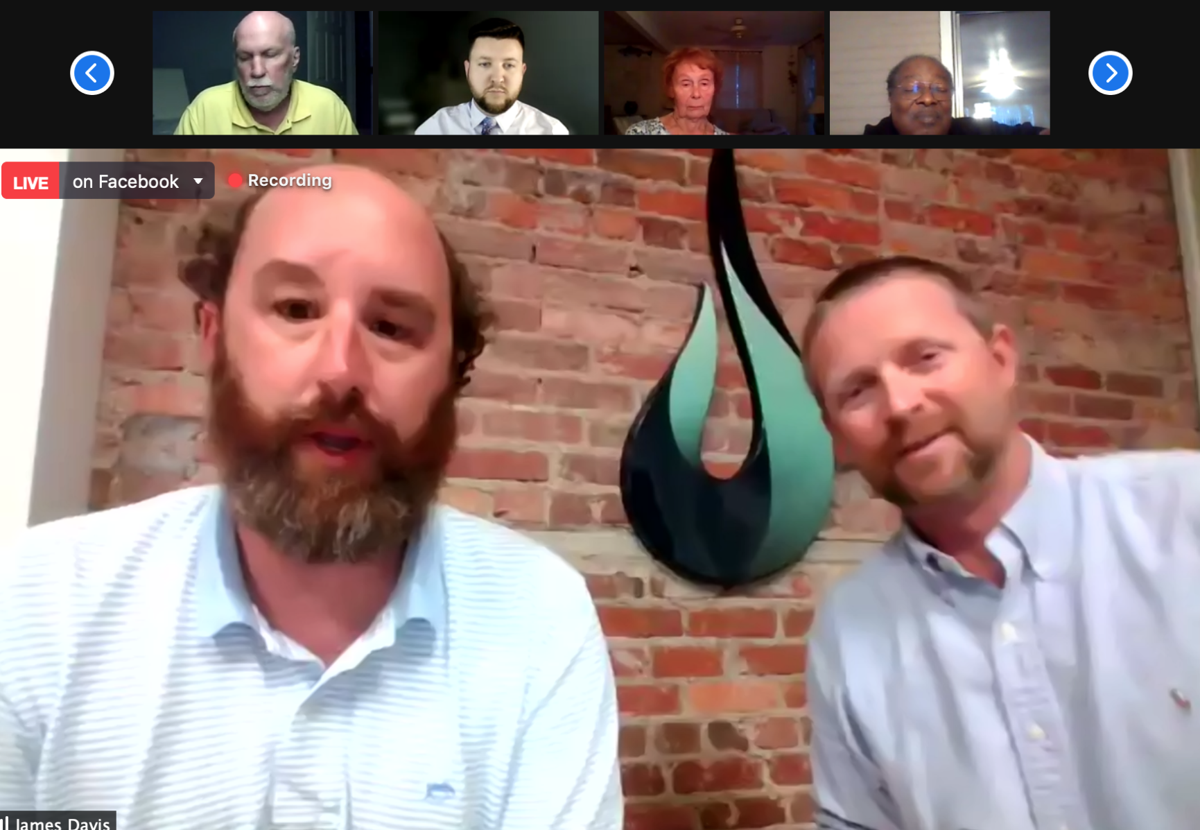 From left, main screen, consultant Sam Barnes and Davis Fuels President Jim Davis speak with the Beaufort Board of Commissioners during a hearing for a special-use permit Monday via Zoom. Mr. Davis needs the permit to move forward with a proposed market and fueling station on Lennoxville Road. Listening, from left, above, are a participant, town clerk Allen Coleman and commissioners Ann Carter and Charles McDonald. (Jackie Starkey screenshot)

BEAUFORT — After hours of testimony, the Beaufort Board of Commissioners requested more information on traffic impacts, zoning restrictions and more, thereby delaying a decision on whether to issue a special-use permit for a gas station and convenience store on Lennoxville Road.

Following a hearing Monday night held via Zoom, the board unanimously tabled the item at least until its Monday, Aug. 23 work session.

“I personally have heard so much information tonight, pro and con … that I am not able to decipher all of it tonight,” Commissioner Charles McDonald said as he made a motion to table the matter.

Jim Davis, president of Jim Dandy Convenience Stores, has requested a special-use permit that would allow him to continue plans for a store and fueling station at 1550 Lennoxville Road, a site currently occupied by Austin Veterinary Clinic. The proposal has been subject to considerable community discussion, including from those in support of a second gas outlet in town and nearby neighbors concerned about health, safety and property values.

In his presentation Monday, Mr. Davis and his representatives focused on pump safety, lighting and other elements of the proposal they felt were subject to public criticism. He called the site, which fronts the two-lane road and is surrounded by residential properties, a “very strategic location.”

“This is personally important to me, to make sure the town has what it needs as it continues to grow,” he testified. “…We don’t attract traffic, we mean to capture it, if you will.”

He also reiterated an earlier commitment to have the business “fit the community.”

Since the 2019 closure of the BP near the intersection of Live Oak Street and Highway 101, Beaufort is home to only one gas station, a Speedway on Live Oak Street. Many residents, online and in public meetings, have noted the town could use an additional option for fuel, especially after major storms.

Monday’s hearing followed a July 19 planning board decision recommending commissioners deny the permit. The planning board had recommended Mr. Davis provide traffic and environmental analysis to the town as part of the ongoing application process.

Monday, the town heard from more than a dozen individuals with so-called standing in the quasi-judicial proceeding, including Mr. Davis, his representatives, neighbors within a town-prescribed 200-foot distance from the subject property and expert witnesses called by those parties.

A seemingly organized opposition spearheaded by the proposed business’ nearest neighbors addressed matters of public health, traffic, the potential for leaks and spillage and the possible effects on area property values.

Bob Upchurch, testifying as an expert witness in his capacity as a state-certified general appraiser, said gas stations are considered to contribute to external obsolescence, or the degradation in real property values due to issues outside of the subject property.

“It’s very difficult to place a dollar amount on the degradation in value due to external obsolescence, but it certainly has a negative effect on how much a property owner can get for their property if they can sell it,” Mr. Upchurch testified.

Among the other expert witnesses in opposition were a toxicologist, a public health professional and an attorney specializing in environmental law. Many of the direct neighbors asked – or in some cases, told – the board to deny the permit that could allow the business so close to their homes.

Following the hearing, several commissioners said they needed more information on traffic and environmental impacts; the definition of a convenience store versus a gas station in terms of what is allowed under the town’s zoning ordinances; and general compatibly with the surrounding area.

Commissioner Marianna Hollinshed noted additional concerns about the light from vehicles exiting the property, the canopy for the fuel pumps and the road conditions that might make semi-truck traffic to the site a concern.

“Those are my concerns and they haven’t been resolved tonight,” she noted.

Commissioner Sharon Harker called the lack of traffic and environmental analysis from the applicant “disappointing.”

In an email Tuesday afternoon, Mr. Davis told the News-Times he will see the application for the permit through despite Monday’s setback.

As for discussion of whether the proposed use is allowable in the zoning district, Mr. Davis said his team has adjusted plans based on public input, but the primary purpose of the business is as a fueling station, not as a convenience market.

“We remain confident that this is the best location from which to provide a secondary option to support the town's overwhelming need for a solution of this nature,” he said, in part, noting an “overwhelming volume” of support from the community.

Under the town’s land development ordinance, to approve a special-use permit, the board must find the use is allowable in the property’s zoning district – in this case light industrial – the application is complete, the location and “character of the use” is in conformity with the LDO and other planning elements, traffic issues meet town regulations and are adequate for the use, the use will not “substantially injure the value of adjoining or abutting properties” and the use does not “materially endanger” public health and safety.

Town staff has told the News-Times if commissioners issue a special-use permit, the project would be subject to other state and federal permitting requirements.

Editor's note: This article was last updated at 9:21 p.m. Tuesday, Aug. 10, 2021, to identify Jim Davis as president of Jim Dandy Convenience Stores. He was previously correctly identified as president of Davis Fuels, a separate company.

Delay , delay , delay . The one thing this crowd excels in . Must be part of the training they get post election . If you do nothing then you do nothing wrong . Not totally true but works in a pinch . Especially with a largely ignorant audience .

Convenient Stores are not allowed in L1 zoning for The Town of Beaufort.

JD stores makes more money on biscuits than gas. Jim’s own words. So a convenient store is needed. Regulations do noT allow that in L-1 zones. B-1 yes ! so unless regulations change I see no Jim Dandy for Lennoxville.

As you have said before . Is it the store or is it the gasoline part ? Why has this come to light so late ? Can’t believe the board was not aware of this but it is Beaufort .

Don’t have a dog in this squabble but just sounds a bit fishy . Could well hinge on how vigorously Mr Davis wishes to pursue this matter . No victory dances till it is over .

Variances are sold and bought 8n cities and counties everyday.There is a lawyer sniffing around.He will be paid to figure out with linguistic acrobats to get it approved an the neighborhood will be left in the linguistic quicksand.

Filling in wetlands and building isn't allowed either but that happened anyway. The delay tactic is more like a distraction, than a delay. This is how it works. They delay, delay, delay until no one is looking then they will approve it quickly under the radar. In a special meeting, or at one of the meetings when the attendance of the public is really low. If they know the public, and they do or else they wouldn't have been elected, they will luck out and there will be a meeting when all you pesky "we don't want a gas station" folks aren't there, they can approve it. Think of all the revenue and jobs it will create. You will get use to it. Getting use to your little paradise being destroyed is a requirement if you want to live in Beaufort. You might even like the convenience of being able to walk to the store and grab some snacks and drinks. Think of all the gas you will save by not having to drive so far to get, well ummm, gas.