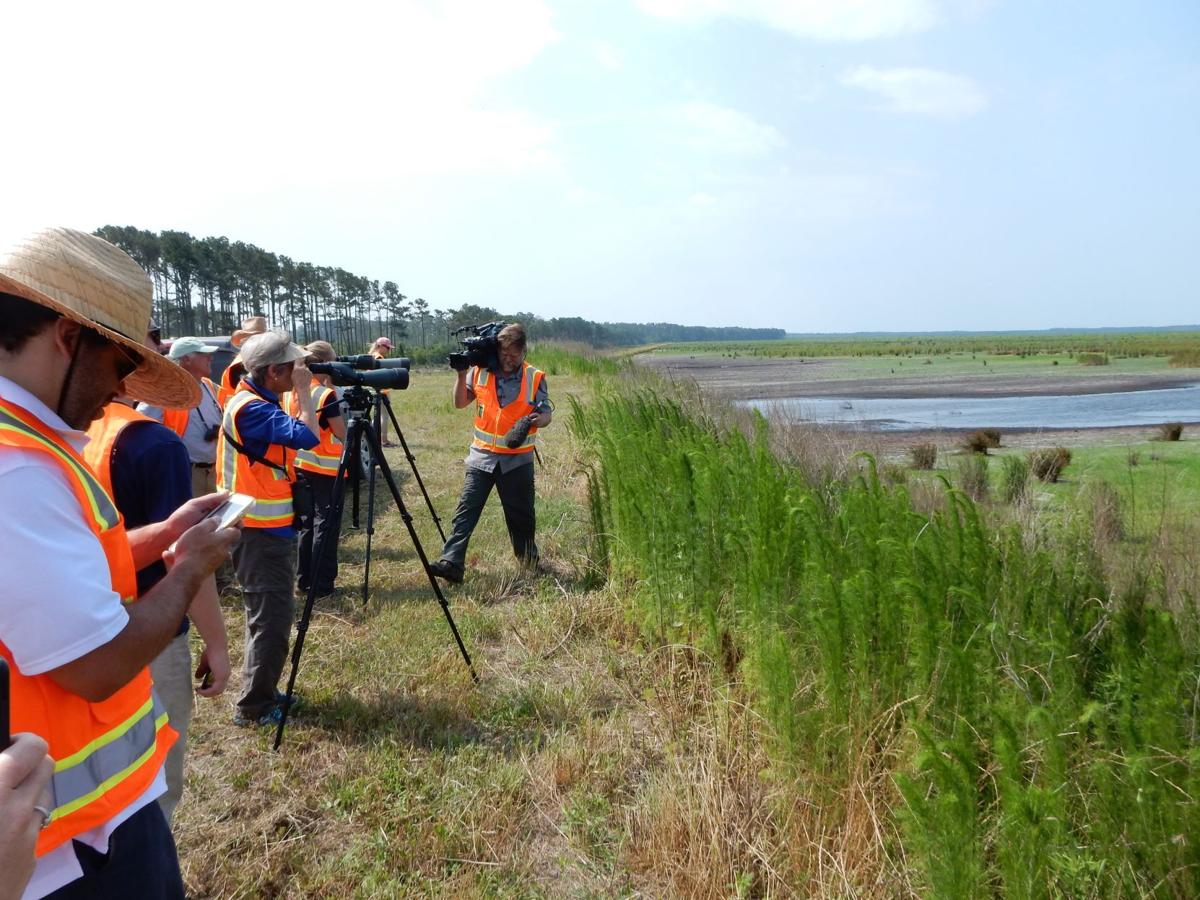 A tour group at North River Farms restoration project site in Otway Thursday stops to observe the wildlife that’s been showing up at the site. (Mike Shutak photo) 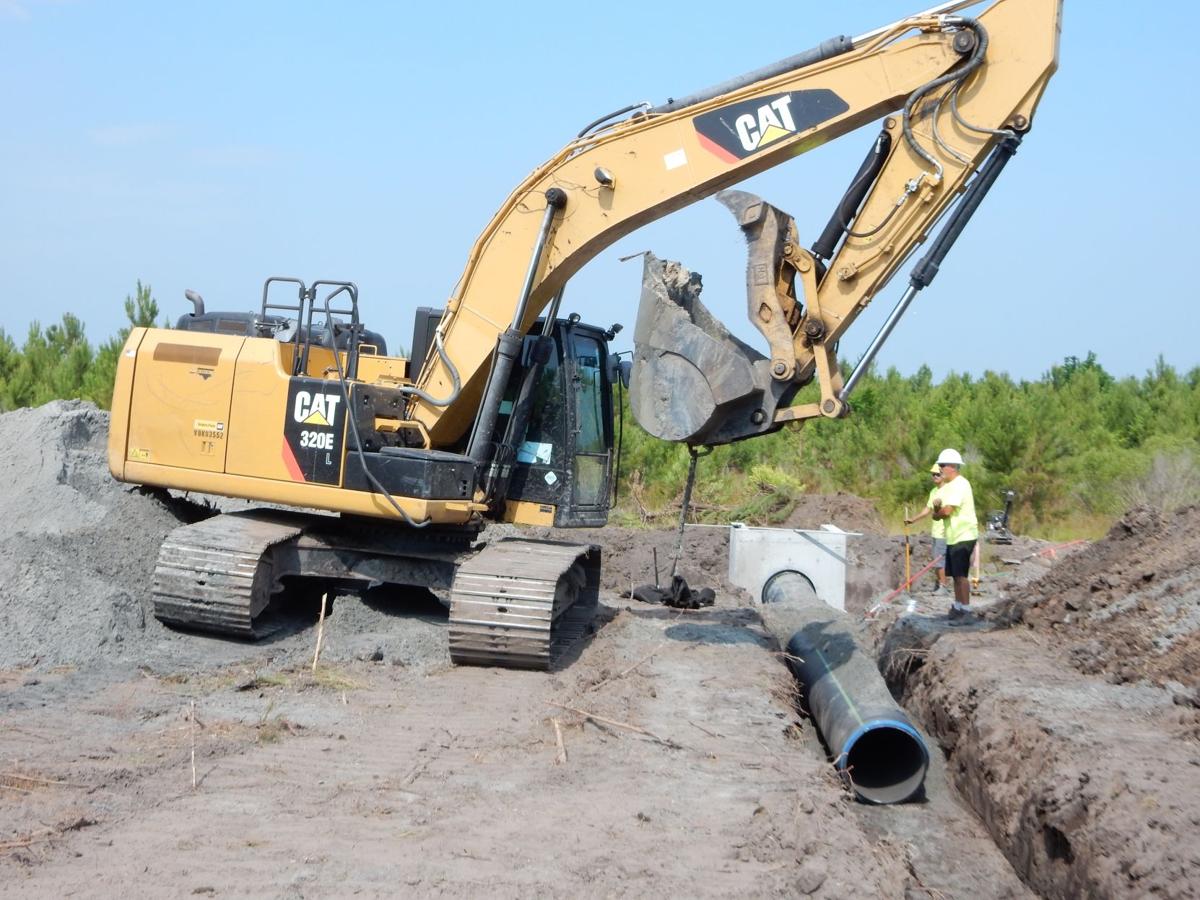 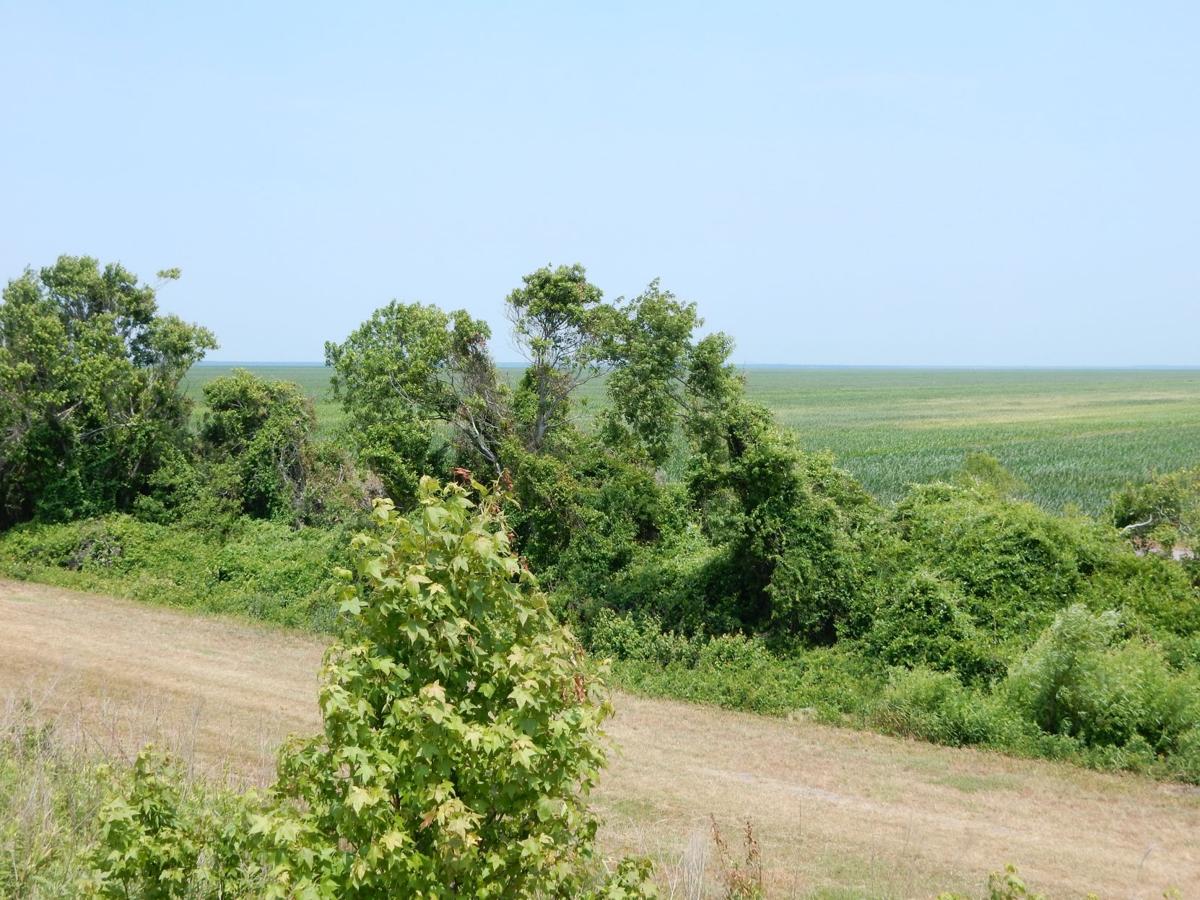 An unpaved road runs along part of the perimeter of the North River Farms restoration project site, while beyond the tree line farmland is visible. (Mike Shutak photo)

A tour group at North River Farms restoration project site in Otway Thursday stops to observe the wildlife that’s been showing up at the site. (Mike Shutak photo)

An unpaved road runs along part of the perimeter of the North River Farms restoration project site, while beyond the tree line farmland is visible. (Mike Shutak photo)

Editor's note: This article was updated after presstime to correct a name.

OTWAY — About 20 years of restoration work on about 6,000 acres of farmland is almost complete, and the finishing touches should be done by October at the latest.

This is what members of the N.C. Coastal Federation had to say Thursday during a tour of the North River Farms wetlands restoration project.

The project began in 1999 and is the largest wetlands restoration project in North Carolina to date. During the tour, NCCF coastal specialist Bree Charron told those in attendance about the work that’s gone on over the last 20 years at the site.

“In the 1980s and 1990s this area was ditched and cleared for farming,” Ms. Charron said. “The Coastal Federation worked with the N.C. Clean Water Management Trust Fund to purchase the first tract, about 2,000 acres.”

In the following years, additional tracts were purchased with the help of additional partner organizations, and in 2003, the federation and its partners began restoring the natural wetlands that existed prior to the property being turned into farmland. The federation’s partners on the project include private hunting club 1804 Wildlife Partners LLC and the U.S. Department of Agriculture’s Natural Resources Conservation Service Wetlands Reserve Program, now called the Agricultural Conservation Easement Program.

The project has been completed in 11 phases over the years. Ms. Charron said the last phase should be complete by sometime in October.

During the tour Thursday, the group stopped at an area being restored by contractors.

“These emergent wetlands will be grassy wetlands surrounded by forested wetlands,” Ms. Charron said. “It (the project) is under a permanent federal conservation easement, which means nothing can ever be built.”

At another stop along the tour, Coastal Wildlife Consultants contractors were installing a water control structure. Ms. Charron said these types of structures are often built to allow an area’s water level to be controlled, and the Coastal Federation intends “to hold back as much water as possible.”

Coastal Wildlife Consultants owner Mike Johnson was on hand at the installation site.

“My specialty is waterfowl habitat,” Mr. Johnson said. “There’s a lot of fruit to our labors. We create habitat and then manage that habitat. “

With the majority of the active restoration work complete at North River Farms, wildlife has been seen with increasing frequency. Local birding expert John Fussell, who was on the tour, said he’s been bird watching in the North River Farms area since late 2002.

Among the species seen is black rail, which has been proposed for listing under the Endangered Species Act as a threatened species.

Other wildlife sighted at the project site include alligators, otters, beavers, bears, raccoons, snakes and terrapins.

Another reason the federation and its partners have been restoring the wetlands is to control stormwater runoff.

Stormwater is the No.1 non-point source of water pollution in the state. When rain events occur over areas with impervious surfaces or with poor water retention, the water flows quickly to drains and then to local water bodies. It often picks up pollutants along the way, carrying them into the water.

“When this (land) was all forested, the rain was all absorbed,” Ms. Charron said. “Once we started ditching and draining, it started running off into the adjacent waterways, carrying nutrients and pathogens. One of these drainage canals can have seven million gallons of water leaving the farm a day.”

With the wetlands being resorted at North River Farms, the land will have better stormwater retention, filtering it instead through the ground.

“If you look at North River Farms as a whole,” Ms. Charron said, “we capture about one billion gallons of water per year.”